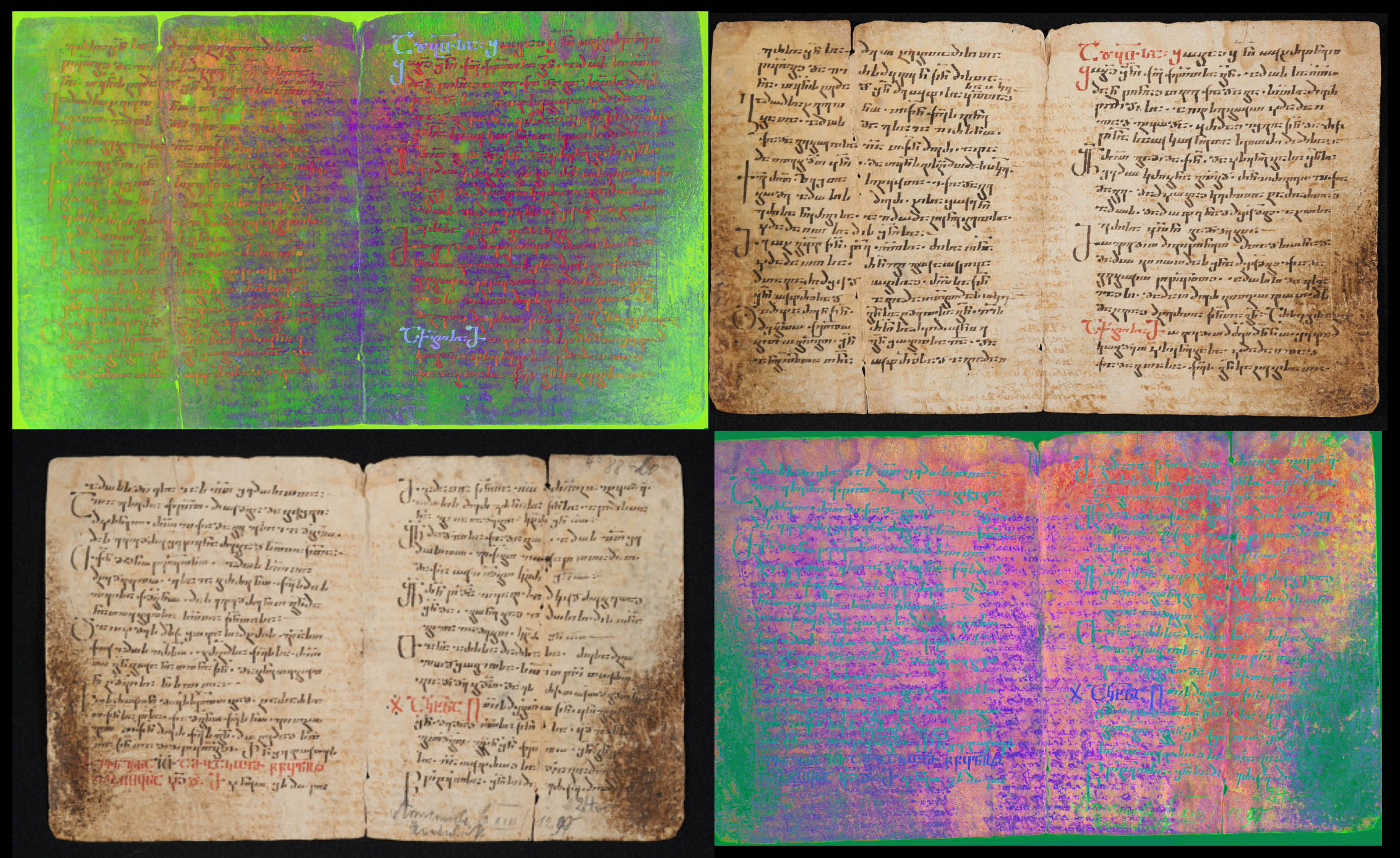 Natural light and processed MSI images of the HMML Palimpsest

History of the HMML Palimpsest
The HMML Palimpsest Project focuses on the history, scientific imaging, and research of a medieval parchment bifolium, SJU Ms Frag 32, in the Special Collections of the Hill Museum & Manuscript Library. A palimpsest is a parchment manuscript whose writing has been mechanically scraped or chemically scrubbed, so that the parchment sheet can be reused for a new text. This was not an uncommon practice in certain places and periods during the Middle Ages, when parchment – an expensive sheet material – was in demand for use in creating new texts. 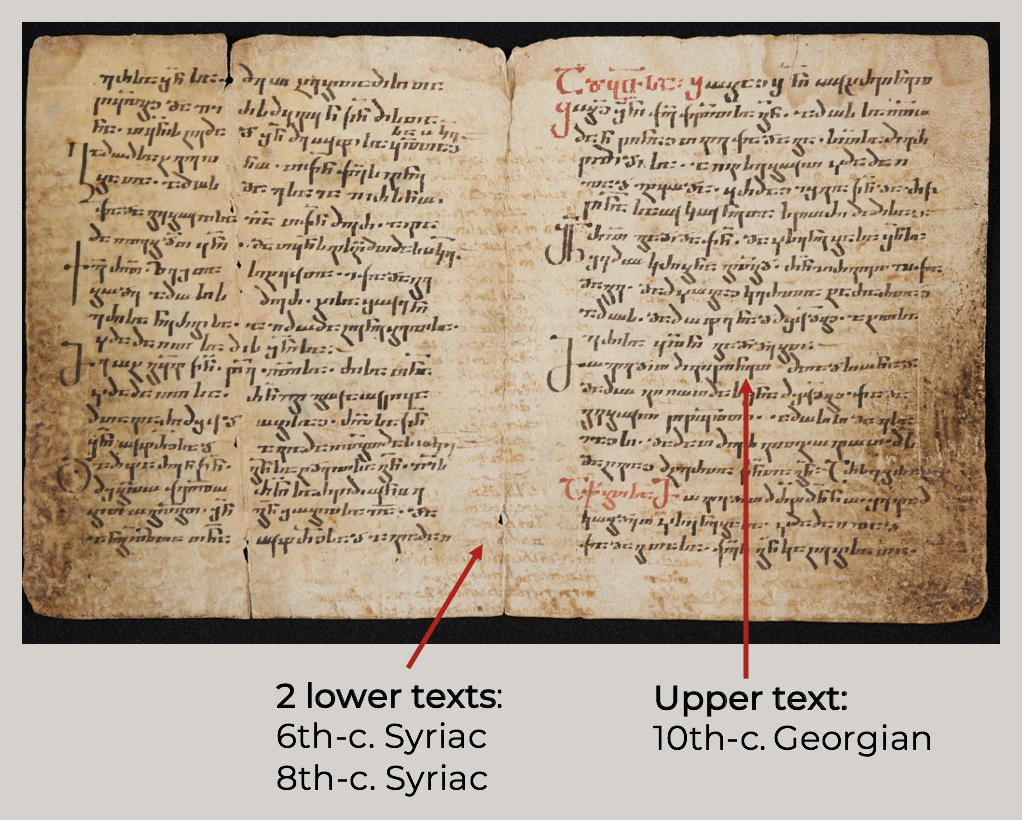 The HMML palimpsest, with upper and lower texts indicated

Advanced imaging technology has been used for over two decades to read hidden texts within parchment manuscripts. The early pioneering work in the field was carried out by an international team of data scientists, imaging experts, and manuscript scholars, who came together to image the now famous Archimedes Palimpsest, found to contain lost mathematical treatises of ancient Greek mathematician Archimedes. More recently, imaging was carried out on the Syriac Galen Palimpsest, that revealed the scrubbed off text of Sergius of Resh 'Ayno's Syriac translation of ancient physician Galen's Greek pharmacological treatise, "On Simple Drugs." Each project enhances the application of advanced imaging for manuscript studies and the HMML Palimpsest Project builds on these earlier imaging experiments, furthering technology in the field.

Multispectral Imaging
Narrowband multispectral imaging is often the first technology applied to imaging a palimpsest. This non-destructive technique projects multiple narrow wavelengths of light onto the sheet - ranging from ultraviolet through the visible and infrared - visually amplifying compounds found in inks, pigments, and residue. The resulting data, which captures this response, must be processed to produce images and adjusted to enhance specific areas of text. For texts that are sitting well below the surface of the parchment or are obscured by other elements, XRF imaging may be required to image them. This was the case with the HMML Palimpsest, which has a coating of calcium on the surface that made MSI imaging difficult. Early Syriac manuscripts often have calcium present, and these experiments will improve the knowledge of how to image palimpsests from this tradition. 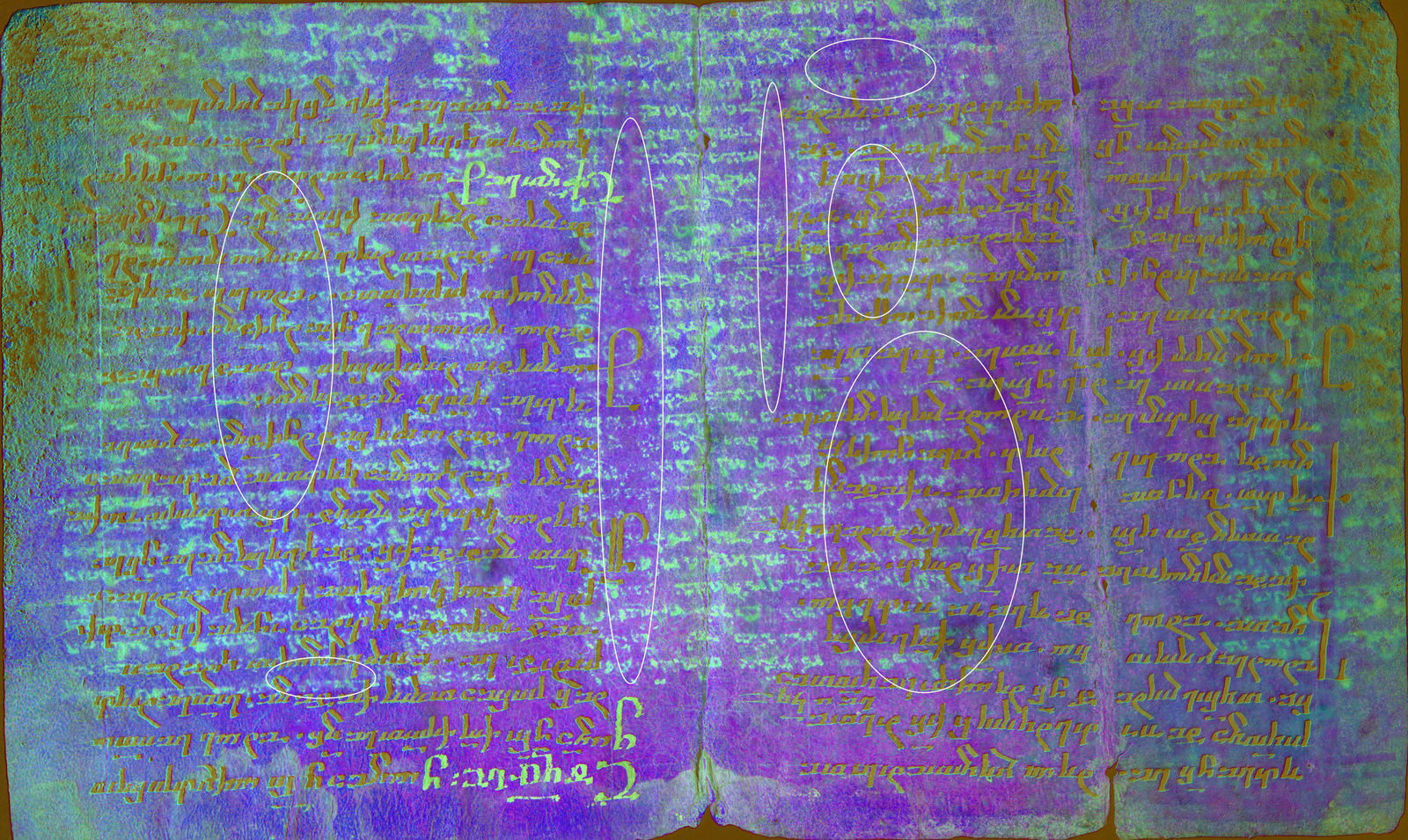 X-ray Fluorescence Imaging
X-ray fluorescence (XRF) imaging provides non-destructive elemental analysis, using a high-powered x-ray source to cause elements in an object to emit x-ray energy. This response is captured and mapped to identify elements found embedded within the sheet, such as the iron, zinc, and copper that can be found in iron-gall ink. With XRF, the metals in inks can be isolated from the calcium in the sheet, and this differentiation produces more detailed data and imagery.

The Synchrotron Radiation Lightsource (SSRL) at Stanford’s SLAC National Accelerator Laboratory is one of a few places in the world where this imaging is performed. Similar to the MSI process, raw data must be processed to produce images. For the HMML Palimpsest, the research team will use SMAK processing software (an acronym that stands for SSRL data scientist Sam Webb's Microprobe Analysis Kit). The software puts data manipulation into the hands of scholars, so they can process images themselves, enhance, reduce, and refine certain elements for better analysis of the hidden texts.

Data Management and Open Access
HMML’s mandate is to provide open access advanced imaging data and images of the palimpsest in both raw and processed formats, to make them available to as many users as possible. Because of the complexity and amount of data produced by the project, HMML partnered with the Schoenberg Institute of Manuscript Studies (SIMS) at the University of Pennsylvania, to host the advanced imaging data on its repository, OPenn. At SIMS, the HMML palimpsest joins the famed Archimedes and Syriac Galen palimpsests on the OPenn site. Natural light images and four processed images of the palimpsest are available for viewing on HMML Reading Room. 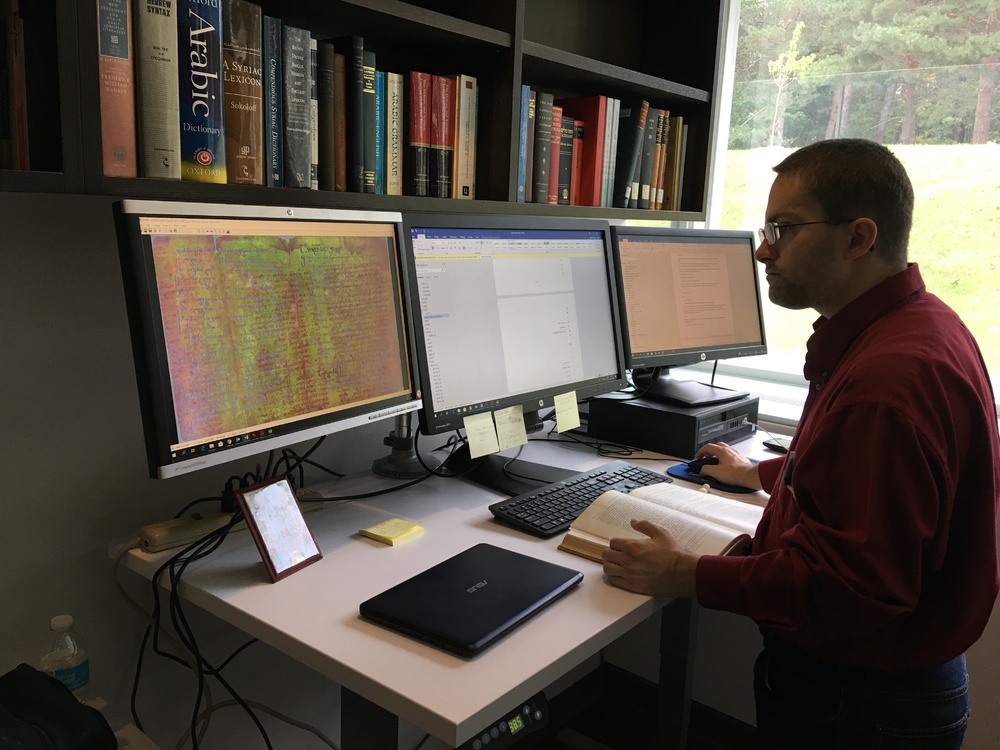 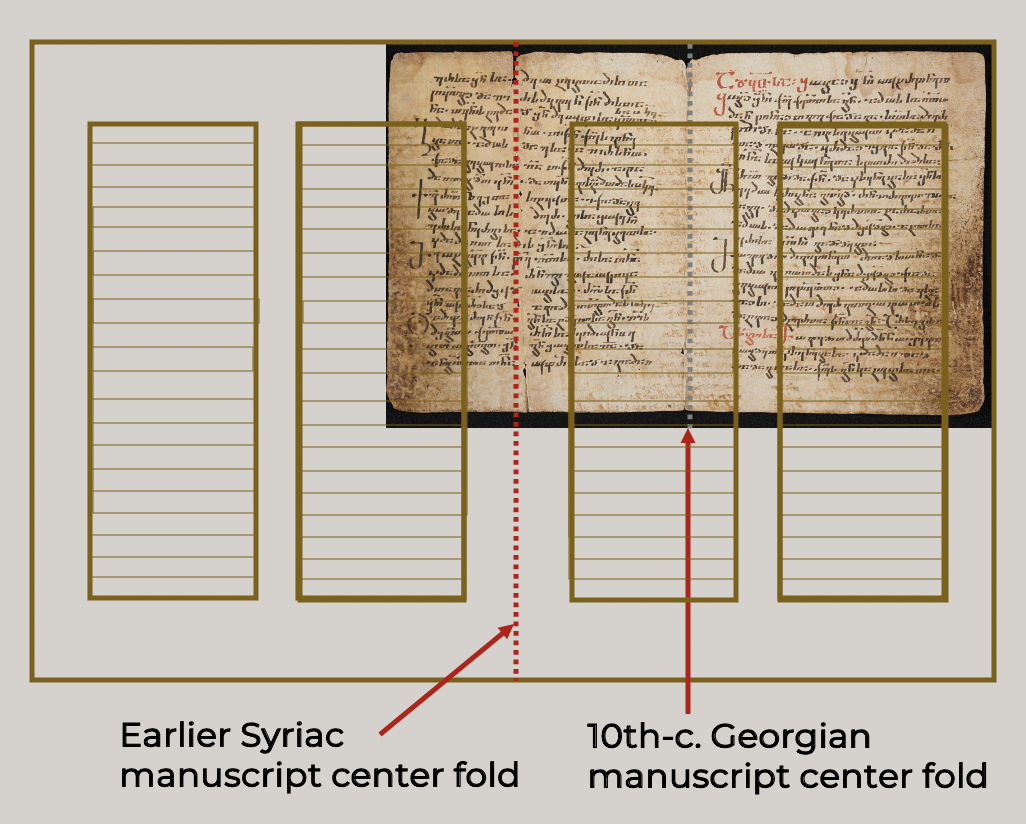 Codicological reconstruction of the size and text layout of the earlier Syriac manuscript (M. Moreton)

Even without imaging, basic codicological analysis can offer clues about the size and layout of the original manuscript, how it may have been used, and by whom. The later Georgian manuscript leaves were cut out of a larger Syriac manuscript, almost double the size. As the diagram illustrates, the fold lines and undertext of the palimpsest allows scholars to recreate the layout and size of the earlier Syriac manuscript with which the palimpsest shared its covers. Though the existing palimpsest is small, by reconstructing the column width and length, it is possible to determine that it actually came from a much larger manuscript. Size is often related to genre, and the dimensions of the manuscript may point to the original Syriac manuscript being designed for liturgical use. The large size of the Syriac letters in the earlier undertext supports this possibility. In any case, the ongoing codicological and textual analysis offers a rich array of information about the production and use of books by religious communities in the premodern Near East.

M. B. Toth, W. A. Christens-Barry, D. Calabro, M. Z. Heintzelman, M. Moreton, C. Stewart, “Integrating Advanced Imaging of Ancient Manuscripts” in The Proceedings of Conference of the Society for Imaging Science and Technology, 7-21 May, 2020, pp. 33-38.