When the Benedictine monks came to Minnesota in 1856, they brought with them a chest packed with the books needed to found a monastery: Bibles, liturgical books, theological and devotional works. Within 20 years the monks had built up a library of almost 1,200 books, mostly from the eighteenth and nineteenth centuries. As German monasteries saw the success of the new foundation in Minnesota, they helped to build up the collection by sending their duplicate titles to the frontier monks.

In 1877 two such windfalls from Germany doubled the size of the growing collection, adding incunabula and many seventeenth- and eighteenth-century books. In the following years, the Abbots of Saint John’s bought books while on visits to Europe, monks sent to Europe for studies acquired more books and manuscripts, and benefactors began to see Saint John’s University as a place to bequeath their own bibliographic treasures.

In recent years, Saint John’s became home to the James A. Kritzeck collection of autographs and letters, Al Muillerleile’s examples of fine printed books from the fifteenth to twentieth centuries, and the greatest gift of all, Arca Artium, Frank Kacmarcik’s personal library of rare books, valuable reference works, and a companion collection of art and sound recordings.

In the years following its founding in 1965, HMML began to build up its own modest collection of old and rare books, most of them gifts from close friends. Particularly notable among them are the medieval western manuscripts known by the names of the generous families who gave them as the Bean, Gavin, Bethune, Dow, Fesler, Koll, and Williams manuscript holdings. Complementing them are the Ethiopian manuscripts donated by the Coskran, Wenner, and Simonson families. In 2004, HMML became the guardian of the historic Saint John’s rare book collection and of Arca Artium. With these complementary collections finally under common administration, full electronic cataloguing and access to selected treasures through Vivarium [now HMML Reading Room], HMML’s image delivery system on the web, became possible. A grant of $540,000 from the Andrew W. Mellon Foundation has supported the complete cataloguing of all of the rare books now in HMML’s care. This major undertaking is scheduled for completion in summer 2008.

Our two principal areas of focus are Bibles and works related to Benedictine monasticism (Benedictina). Other areas in which we have significant strengths are liturgy, typography, paleography, and, because of The Saint John’s Bible, calligraphy. Our collections in these areas support HMML’s holdings of manuscript images, making HMML a unique resource for the study of both handwritten and printed books.

HMML continues to welcome gifts of significant books relevant to its areas of research. We also buy important works as funds permit. In the past few months, we have been blessed with two opportunities to acquire books of critical importance for our collections. In both cases, successful purchase will require the help of our friends. 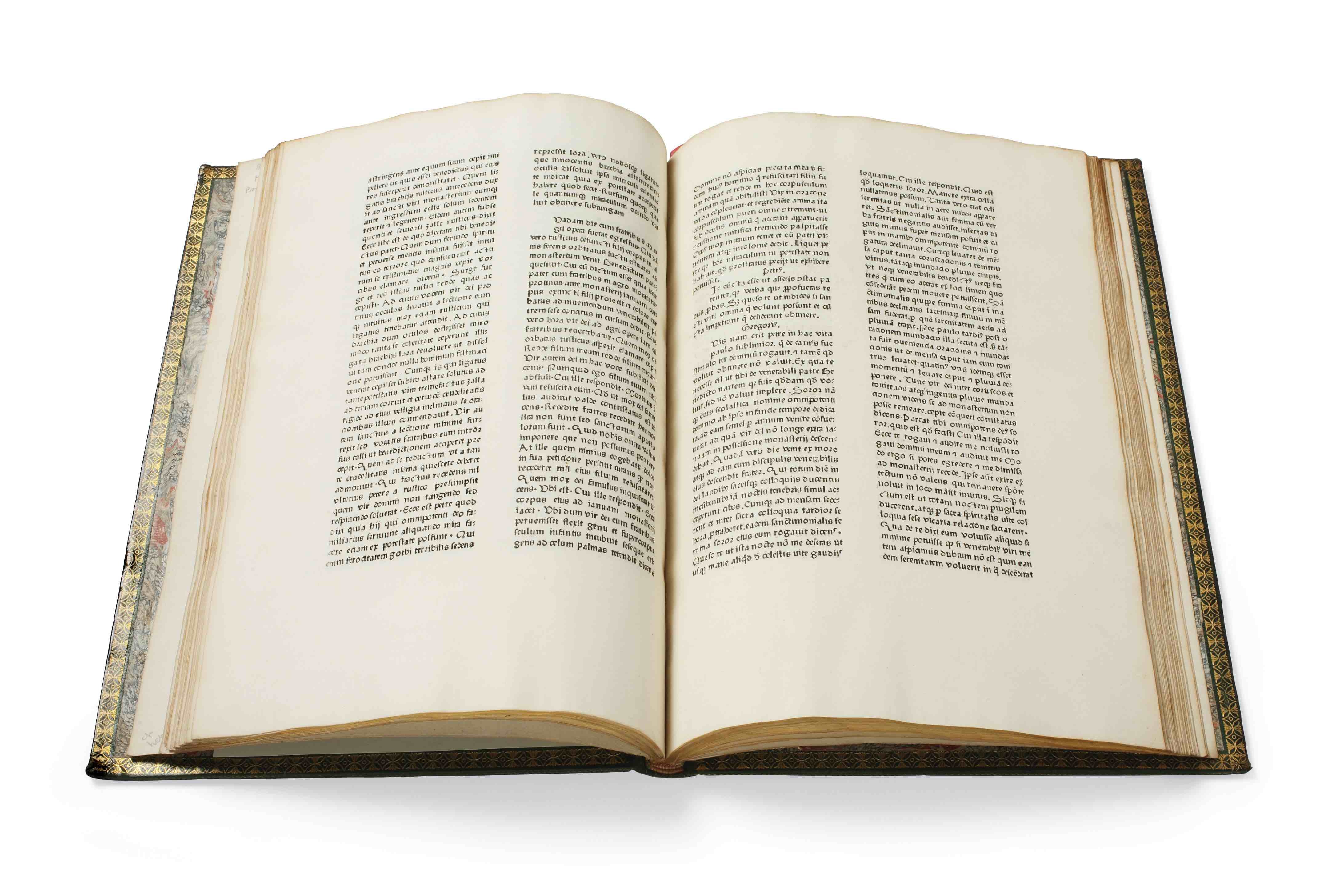 This first edition of the Dialogues of Pope Gregory the Great is the original Latin text, printed in Strassburg in 1472-1473 and rebound in the early nineteenth century. (AARB 00213)

The Dialogues of Pope Gregory the Great are the only source of information we have about the life and deeds of Saint Benedict. HMML has a fine collection of various editions of the Dialogues, including several old examples of the Latin original and the first Italian (1475) and French (1509) translations. Long on our wish list has been the very first edition of the original Latin text, printed in Strassburg in 1472-73. A handful of copies are in the major American research libraries, three copies in the British Isles, a few in continental Europe.

No copy is known to remain in a monastic library. This past summer, a copy of this first edition of the Dialogues became available for the first time in decades. A handsome, pristine copy, it was rebound in the early nineteenth century by the noted Parisian binder Bozérian le Jeune. Well cared for by the distinguished collectors who have owned it over the last two hundred years, this extremely important monastic work has found its way to a good home, where it joins North America’s best collection of Benedictina.

The Ostrih Bible, sometimes known as the “Slavonic Gutenberg,” is the first complete printed Bible in Church Slavonic, the common liturgical language of Slavic Christianity. Printed in Ukraine in 1581, this was in its day by far the largest Cyrillic printing project ever undertaken. Edited and printed under orthodox auspices, the Ostrih Bible (sometimes called Ostrog after the Russian form of the place name) seems to have been deliberately designed for both orthodox and Catholic readers, as its arrangement of the biblical books has features of both traditions. It has been suggested that the motivation for its publication was to unite Orthodox and Catholics in opposition to the inroads of Calvinism in the western Slavic world, giving the older religious traditions a Bible they could use in refuting the Protestant claim that they had neglected the Bible in favor of other religious texts.

The HMML copy was originally owned by the Orthodox Bishop of L’viv, Ukraine, Hedeon Balaban (bp. 1569-1607), and was only recently discovered in northern Romania by a European bookseller. Like the first edition of the Dialogues, this is a very rare book, with only a handful of copies in North America. HMML’s copy is in unusually good condition: most copies are very worn, and often are missing pages. With HMML launching a major, multi-site project in Ukraine this fall, the acquisition of the Ostrih Bible is timely indeed, and will help place HMML on the map for those interested in the Christianity of the Slavic world.

These acquisitions cannot be covered by HMML’s normal funding for collection development. While existing resources have been used for down payments, HMML must raise the balance to ensure that these precious texts can remain in its Rare Book Collection, where they so naturally find a place. If you would like to consider sponsoring one of these outstanding works, please contact HMML.