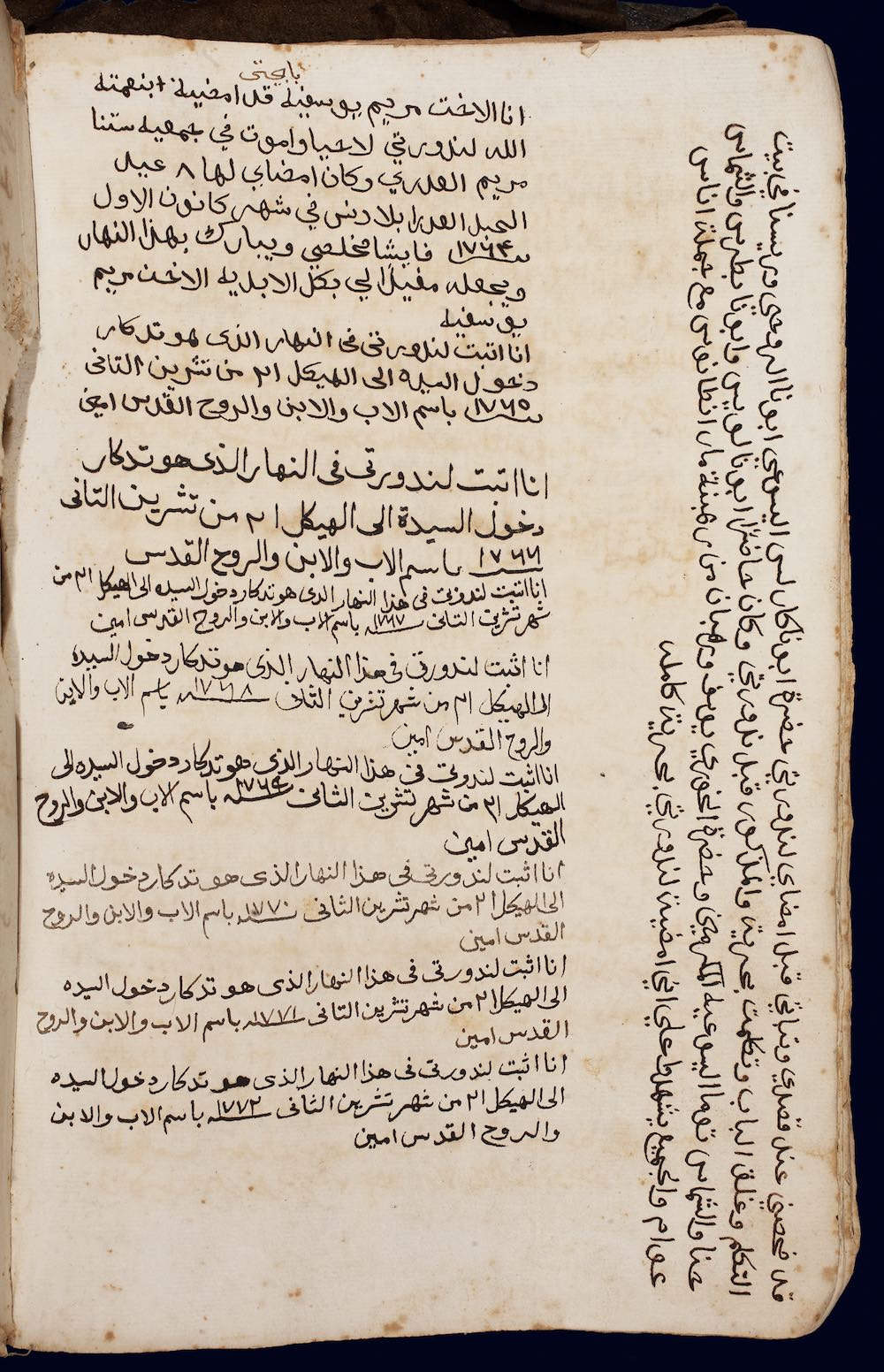 The vows of Sister Mary Josephine, part of the collection of the Lebanese Maronite Missionaries Order in Jūniyah, Lebanon. (LMMO 00232, fol. 64v)

In 1744, the French Order of the Visitation of Holy Mary established a convent in ʻAynṭūrah, Lebanon, known in Arabic as Dayr Ziyārat al-ʻAdhrāʼ.

Testifying to its activity and vitality, many Arabic manuscripts were produced or commissioned by the convent. These manuscripts were all, at some point, transferred to the library of the Lebanese Maronite Missionary Order in Jūniyah, Lebanon, where they are still housed today.

The manuscript LMMO 00232 is among these. It is a book of vows that records glimpses of the lives of dozens of sisters in this convent, with a few pages dedicated to each sister: her vows, their annual renewal for as long as she lives, and sometimes a short tribute after her death. Here is one example:

“I, sister Mary Josephine, have taken my vows, by the grace of God, to live and die in the Society of Our Lady Mary the Virgin. I took my vows on 8th of December 1764, the feast of the Immaculate Conception. May my Savior both will and bless this day and make it beneficial for my eternity.

My intentions and constancy were examined before I took my vows by our spiritual father Carlos the Jesuit in the parlor. He shut the door and I spoke freely, and then he accepted my vows. This was in the presence of the honorable Jesuit fathers Louis and Peter, deacons John and Thomas, priest Joseph, and other monks from St. Anthony’s Monastery, as well as many lay people who can testify that I took my vows of my own free will.”

These were the initial vows of this sister. Following this entry, the pages dedicated to her (fol. 64v–66v) repeat the same sentence over and over, documenting the renewal of her vows every year on the same day:

“I confirm my vows today, the Feast of the Presentation of the Lady to the Temple, on 21st November of the year 1765 [entries encompass years 1765–1806], in the name of the Father, and the Son, and the Holy Spirit. Amen.”

Sister Mary Josephine passed away on October 14, 1807, nearly a month before the annual renewal of her vows. We know this from the manuscript’s tribute, which reveals more information about her life. An Armenian Catholic from Aleppo, she was raised by Jesuit missionaries and joined the Visitation monastery along with six other sisters, of whom she was the youngest.

The tribute goes on to describe her virtues, qualities, and ministry in the monastery as a seamstress. Mary Josephine died at the age of 65, after having spent 43 years as a sister or, as the tribute puts it, “in the light.”

ABOUT THE AUTHOR: Dr. Vevian Zaki is cataloger of Arabic manuscripts at HMML.
Story Tags:
All StoriesCollections
Share:
Previous Story
Next Story