A Tale of Two Herbals, From Medicine to Food in the 16th Century

This story is part of an ongoing series of editorials in which HMML curators and catalogers share their discoveries, focusing on a theme that travels throughout HMML’s collections. Examining the theme of Medicine, Dr. Matthew Z. Heintzelman shares this story from HMML’s Special Collections.

They are an unimpressive-looking pair—large volumes with damaged covers that bear witness to their age. And yet, HMML is fortunate to be able to care for these two printed books on herbs which were published in the 16th century: SJRB 00623, published in 1549, and SJRB 00617, published in 1573. Both are ostensibly editions of De materia medica (On Medical Material) by Pedanius Dioscorides (ca. 40-90 CE), a descriptive inventory of plants and their medicinal uses that was widely read for over 1,500 years, first circulating in Greek, Latin, and Arabic manuscripts.

In the two printed books at HMML, the editors’ approaches and world views contrast sharply with each other and in this way demonstrate the tension between honoring past knowledge while introducing newly gained insights.

Herbals—books describing the medicinal use of plants—have been important scientific sources for millennia, across traditions and eras. One very early copy is the Vienna Dioscorides (Austrian National Library, Codex Med. Gr. 1), a 6th-century manuscript with colorful depictions of hundreds of plants from the Greek-speaking areas of the Eastern Mediterranean. This particular copy (with its main text in Greek and annotations in Arabic script) has been reproduced in modern facsimile editions—in both full and reduced sizes. Numerous other authors also produced herbals throughout the Middle Ages. HMML microfilmed several herbals in European libraries in the 1960s to 1990s.

In the late 15th century, printed editions of De materia medica began to appear, often illustrated with woodcut depictions of the plants. Interest in Dioscorides’ herbal intensified with the publication of a new Latin translation by Jean Ruel (1474-1537) in 1516, which was frequently reprinted. About three decades later, Pietro Andrea Mattioli (1500/1501-1577) translated Ruel’s work into Italian, but also added his own extensive notes (I Discorsi, 1544).

The two editions at HMML are later printings of Ruel’s Latin translation (Frankfurt am Main, 1549) and Mattioli’s Discorsi (Venice, 1573). It is clear that HMML’s copies were important day-to-day resources for their owners—perhaps in a workshop or office. Both show substantial stain damage from water (or some other liquid). The 1549 copy also lacks 28 leaves in the front matter (possibly an index), including the title page, and many of the remaining pages have repaired corners. An appendix on distillation in the 1573 Discorsi shows evidence of what appear to be acid stains throughout.

While there were already editions of the Greek text in the 15th century, it was Ruel’s Latin translation that contributed heavily to the book’s popularity across early modern Europe. Indeed, his translation was reproduced frequently in the 16th century, demonstrating the demand for such useful medical information and the efficacy of printing for distributing such information.

The 1549 edition continues that development, while boasting explanatory notes from some of the most famous botanists of that time: Valerius Cordus (1515-1544), Euricius Cordus (1486-1535), and Conrad Gessner (1516-1565). The addition of this scholarly apparatus supports use of the primary text in various ways, including the name of the plants in other languages, including Greek, French, or German.

By contrast, Mattioli envisions a different purpose to his edition of De materia medica. The woodcut illustrations are larger and appear lifelike, and his discourses (printed in italics) are added directly after each chapter in Dioscorides’ text (which is printed in roman font). The additions are often much longer than the original text and contain many new plants not previously included in the De materia medica. Among the more famous introductions is the “tomato” (“pomi d’oro”), which appears on page 689, where it is briefly discussed alongside eggplant, mandragora, and other members of the nightshade family.

Another recently introduced plant is the “Formento Indiano” (corn or maize), which is discussed and depicted on pages 307-308:

One could also reasonably add to the specimens of wheat what some incorrectly call “Turkish wheat,” and I say “incorrectly” because it should be called Indian wheat, not Turkish, for it comes from the West Indies and not from Asia or Turkey, as [Leonhart] Fuchs has argued.”

Mattioli describes the physical characteristics of the plant and its fruit, before turning to the method for growing it:

“The Indians sow this grain, which they call MAHIZ, in this way. They go into the field together and create straight lines equally apart from each other, and then with the right hand they make a hole in the ground with a sharp pole, and with the left they put in four or five grains of seed, & with one foot they cover the hole, so that the parrots do not eat the seed, and continuing in this way, they sow the whole field.”

As we can see, Mattioli takes the text attributed to Dioscorides as a starting point, but his goal is to expand the received content and point to new possibilities for the herbal. Not only does he add hundreds of new plants, but he also moves the study of plants away from strictly medicinal use of herbs to a broader description of plants and their potential use for a wider audience. While the 1549 Dioscorides edition points to the past, the 1573 Discorsi by Mattioli give us a glimpse of the 16th-century present and future. 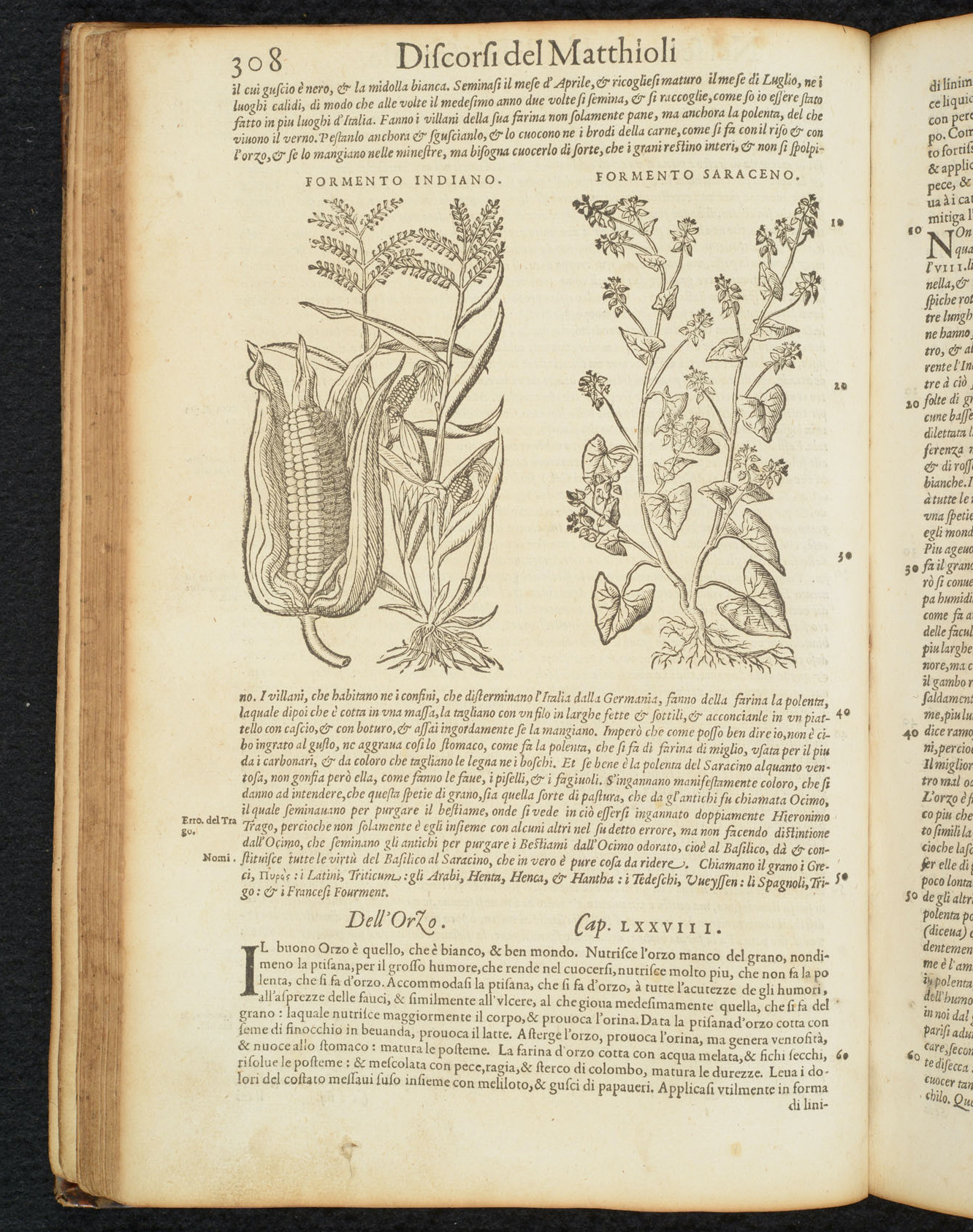