This story is part of an ongoing series of editorials in which HMML curators and catalogers examine how specific themes appear across HMML’s digital collections. From the Eastern Christian collection, Dr. Vevian Zaki shares this story about Banned Books.

The Lebanese poet, journalist, and linguist Ibrāhīm al-Yāzijī (1847–1906) has gained fame as a great advocate of the Arabic language. Among his many significant works, he authored a lexicon of Arabic synonyms entitled Nujʻat al-rāʼid wa-sharʻat al-wārid.

In the introduction to his lexicon, al-Yāzijī explains that its purpose is to provide authors writing in the Arabic language with as many synonyms as possible for difficult concepts, or concepts that writers struggle to render in solid Arabic. The intent was to enable authors to express the meanings they wanted to convey to their readers, without repeating the same idioms all the time. In view of this, al-Yāzijī chose to organize the entries of the lexicon according to the theme, rather than alphabetically.

A manuscript of al-Yāzijī’s lexicon (SPFH 00579) is housed in the collection of the Société des Missionnaires de Saint Paul in Ḥarīṣā, Lebanon, and is now digitized and available online in HMML Reading Room.

On the title page of this manuscript, an intriguing note states that “hādhā al-kitāb sālim min al-maḥẓūr,” or “this book is free from/clear of banned content.” The note is signed by a person called Muḥammad al-Labābīdī and is dated 15 Nīsān 1309 AH (April 27, 1893 CE). The date is recorded using the solar Rūmī calendar, which was usually used in Ottoman governmental paperwork, wherein the solar months are combined with the Hijri years. 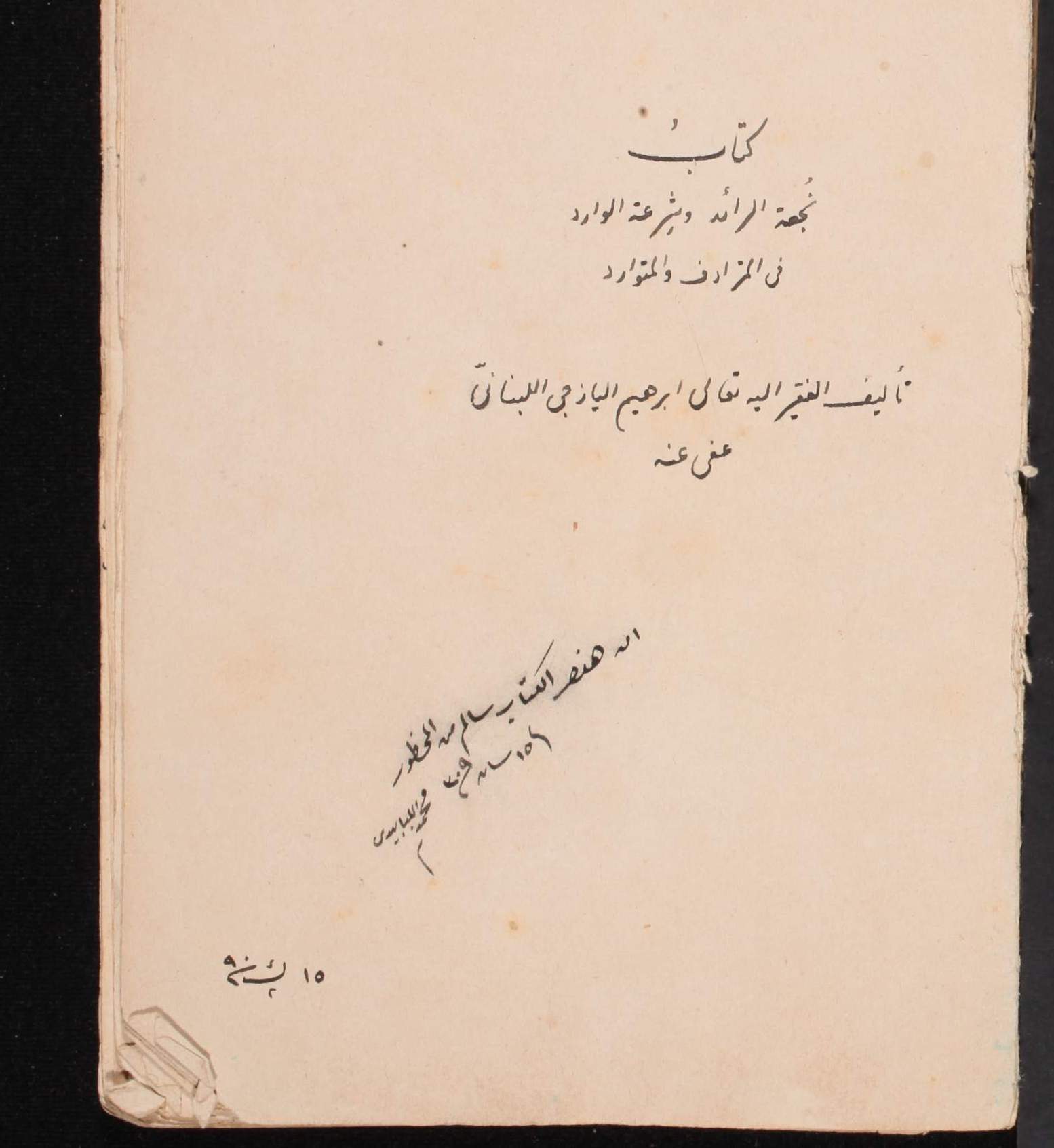 The title page with al-Labābīdī’s clearance note, saying that the book is free from/clear of banned content. (SPFH 00579, folio 1r)

The note is vague. What kind of banned material would be expected in an Arabic lexicon? Who is this Muḥammad al-Labābīdī? And why did he check to make sure the book didn’t include any banned content, and sign to this effect?

Some answers can be found inside the manuscript itself. Browsing the pages of SPFH 00579 reveals two things: first, it is most likely an autograph, copied by al-Yāzijī himself; and second, this manuscript was used as a basis for the two-volume printed edition published by Maṭbaʻat al-Maʻārif in Cairo, Egypt, in 1904–1905 CE. 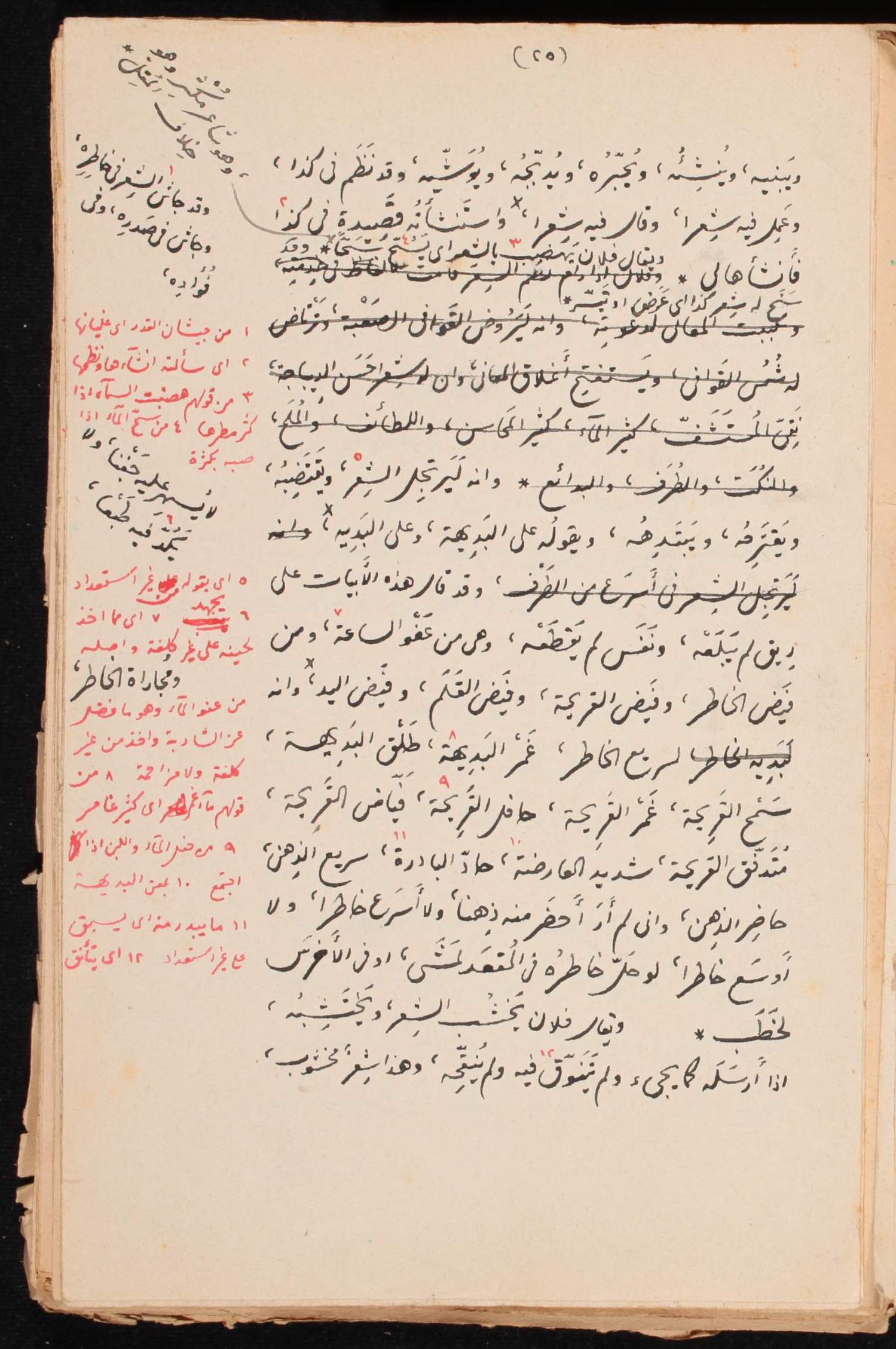 A line connects a marginal note to the place it should be added. Footnotes appear in red ink. (SPFH 00579, fol.192)

Moreover, words, sentences, and even whole sections that were omitted in the manuscript do not exist in the printed edition. In the manuscript, next to the title of most entries, another hand has written the term maṭbūʻ, or “printed,” in pencil, which probably means that this section had been prepared for printing or was already printed. 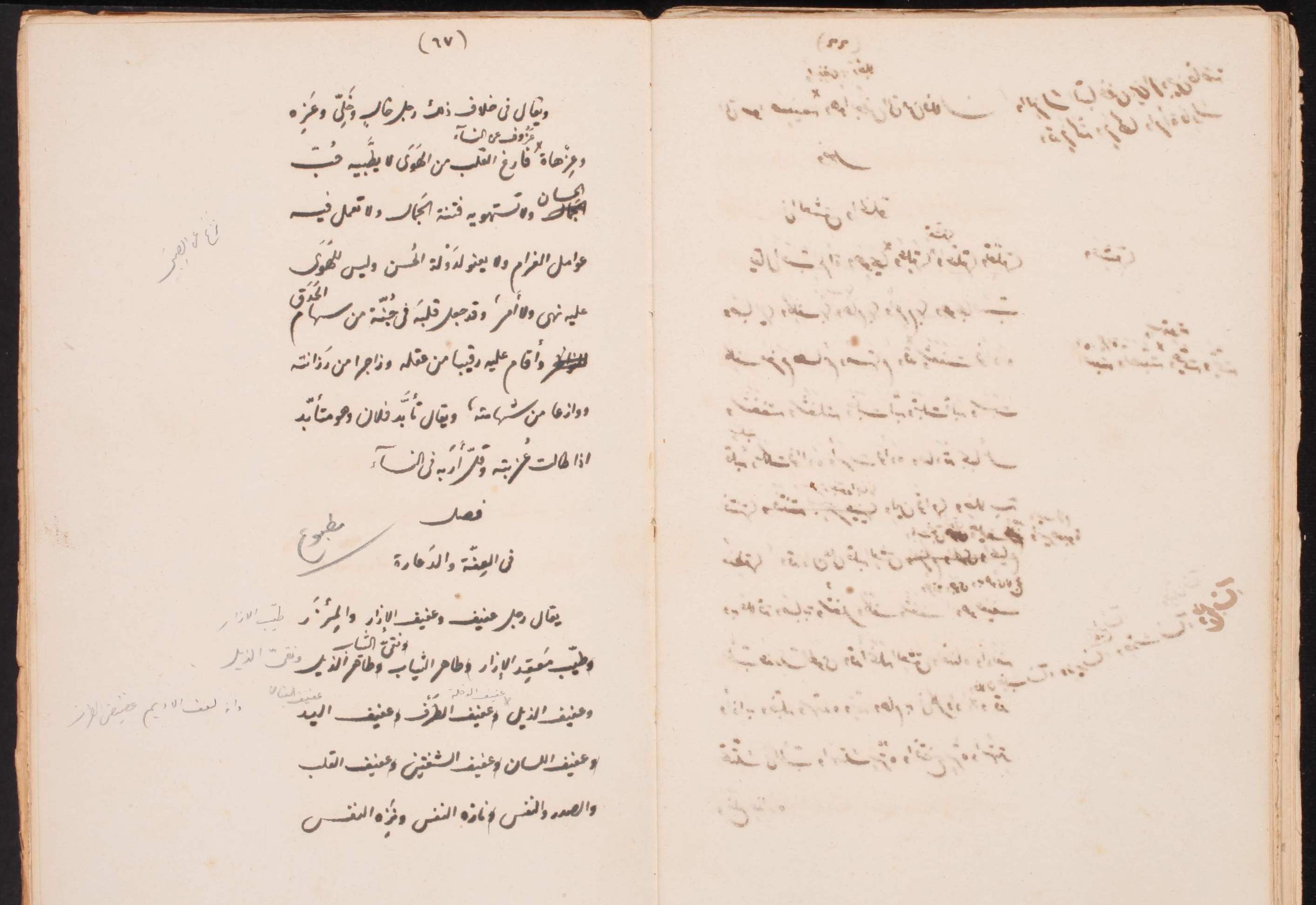 Marginal notes in the main text of the manuscript (fol. 67, pictured) that were integrated into the printed edition (see page 246). This folio also has a note with the idiom maṭbūʻ, referring to the process of printing. (SPFH 00579, fol. 67) 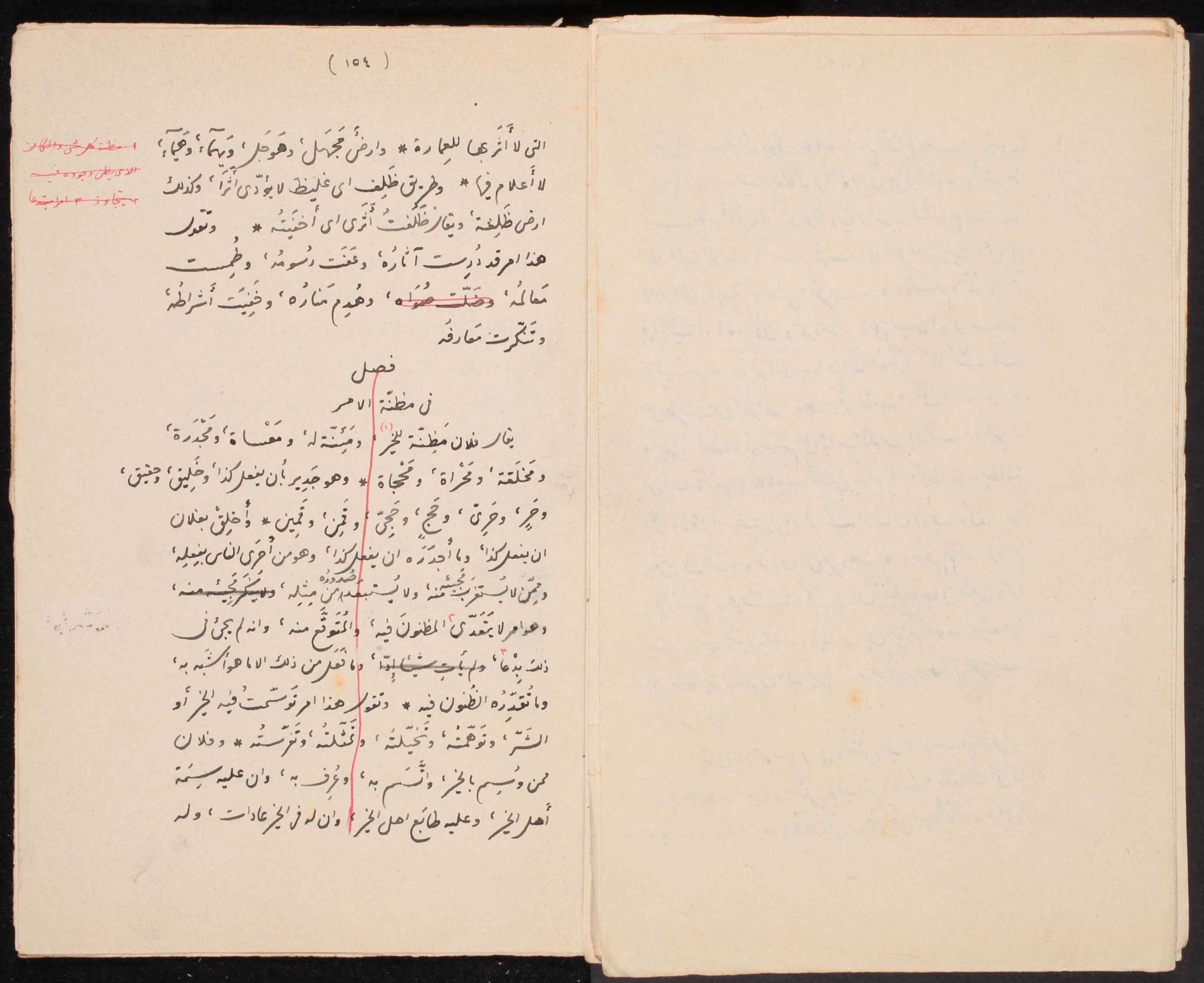 Words and a whole section that were omitted from the manuscript (fol. 321r, pictured) were similarly not included in the printed edition (see related page 218). (SPFH 00579, fol. 321r)

Of further interest, it seems that the leaves of SPFH 00579 were loosened and were incorrectly rebound. Two leaves that do not originally belong to the manuscript were used in this process as “binding waste” to hold the manuscript together, forming leaves 87 and 88 of the manuscript. This binding waste looks like a specimen of the printed edition itself, and a handwritten note on the upper side of folio 88 reads: “Please do not print until it has been checked again.” 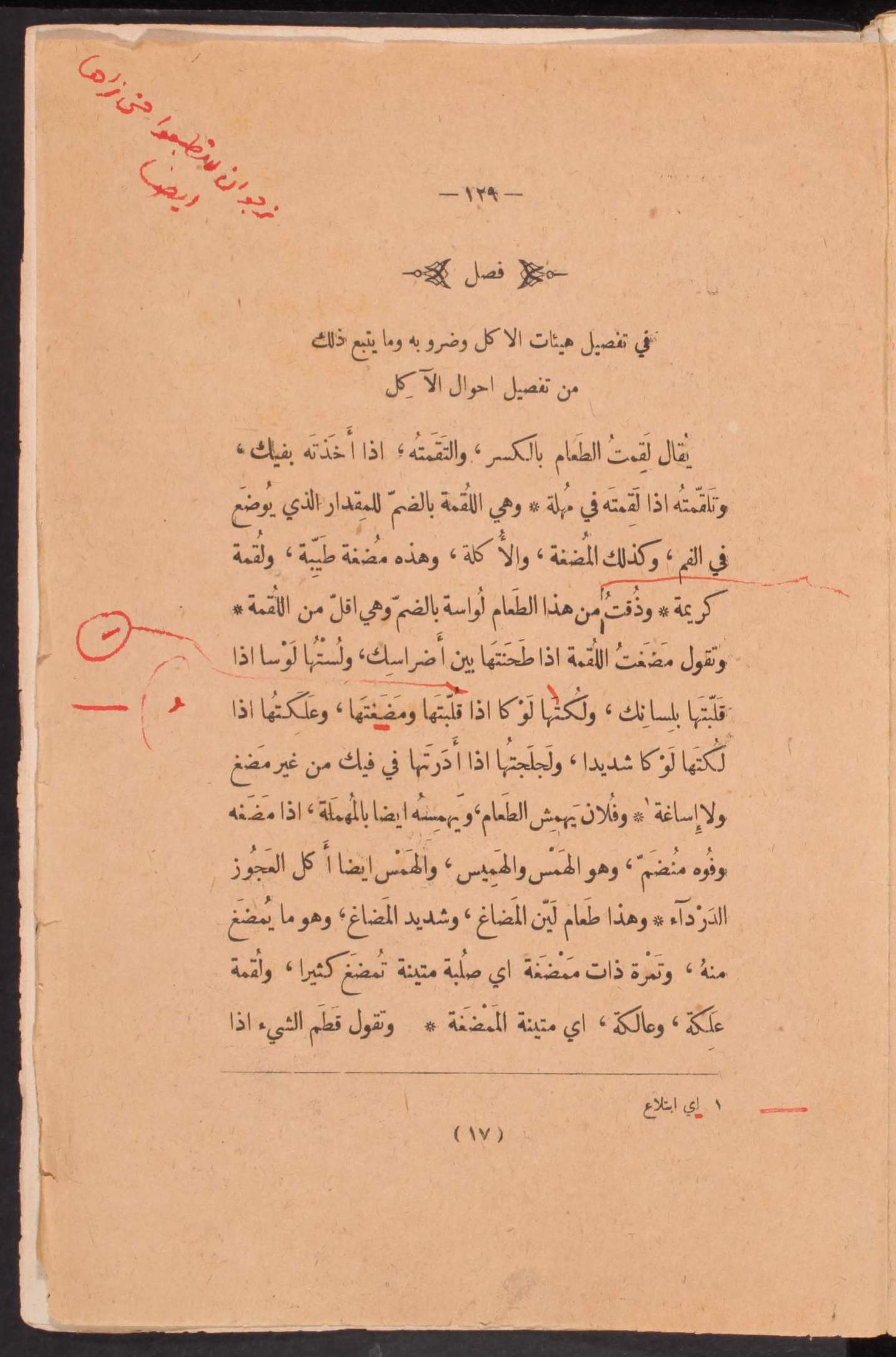 The publication of al-Yāzijī’s lexicon—in print, in the late 19th/early 20th century—explains why the censorship statement appears in SPFH 00579. At this time, subjects of the Ottoman Empire and foreigners were required to apply for a license before embarking on a publication, and ignoring this would have been considered a punishable press offense, particularly in the reign of Sultan Abdülhamid II (1842–1918). Al-Yāzijī was living in Beirut, Lebanon, when the manuscript was reviewed for publication. Although the main focus of censorship was newspapers and satire magazines, printed materials that were far from political subject matter, such as al-Yāzijī’s lexicon, were still subject to this harsh scrutiny.

The practical side of censoring this particular manuscript is ambiguous. The layout of the manuscript with all its marginalia would make it challenging for a censor to read it word by word and approve/deny its contents. One also wonders about the stage at which al-Labābīdī held the manuscript: was it in its current state, or were more marginalia added later? Would he also have checked a specimen of the printed book afterward? It also seems plausible that a lexicon would not have been considered ‘dangerous’ in terms of its contents, and so the censorship may just have been an official, routine signature, involving little or no scrutiny at all.

It is interesting to note that the manuscript got al-Labābīdī’s clearance signature in 1893 CE, during which time al-Yāzijī was living in Beirut. Still, the book was not printed until 1904, and in Egypt, rather than Lebanon. So, what happened?

In 1894, almost one year after getting the clearance note, al-Yāzijī left Lebanon to travel in Europe for a while, before finally settling in Cairo. As indicated in his biography, his main motives for departing Lebanon were the restrictions, censorship, and the lack of freedom that he felt in his own country. In his work as a journalist, al-Yāzijī appears to have encountered much more issues with censorship than with his “free from banned content” lexicon. This censorship eventually incited him to seek out a place like Egypt, which had relatively more freedom at the time. For unclear reasons, al-Yāzijī kept the lexicon as a manuscript for almost a decade, carrying it with him from one country to another until finally surrendering it to the printing press in Egypt. 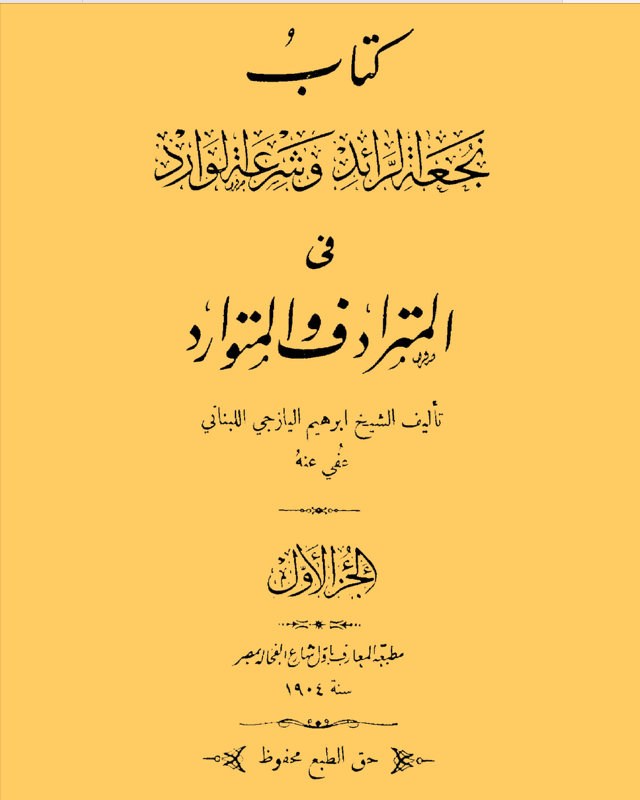 Cover page of the print edition, available as a full-text PDF on the Internet Archive. (Page replicated here under Fair Use guidelines)