This story is part of an ongoing series of editorials in which HMML curators and catalogers examine how specific themes appear across HMML’s digital collections. From the Malta collection, Dr. Daniel K. Gullo shares this story about Banned Books.

Pope Paul IV (1476–1559) issued the Index Auctorum et Librorum Prohibitorum in 1559 to publicly identify books the Catholic Church believed either endangered the faith or—due to the lack of an identified printer, date, or place of publication—were deemed too suspicious to circulate.

The Index created an authorized source that allowed the Catholic Church and its advocates to identify dangerous books and prohibit their use. But the act of printing the index—fixing, as it did, the list of books on the page—made it impossible to add new authors or works without resorting to a new publication.

Updating the list of prohibited works, therefore, posed a singular problem for the papacy. Not only did the Catholic Church face the costs associated with printing multiple editions, it also needed time to vet new publications to determine their orthodoxy in the Congregatio Indicis (Congregation of the Index) established by Pope Pius V (1504–1572) in 1571.

Over time, the Catholic Church developed a variety of methods to maintain and update the list of prohibited books between editions of the Index. Examples of these methods can be found in the Archives of the Inquisition of Malta (Archivum Inquisitionis Melitensis), which had the responsibility of punishing readers, sellers, and importers of prohibited books on the island. Some examples are printed, some hand-written, but each of these methods supplemented the Inquisitor’s responsibility to remove prohibited authors and works from the public. 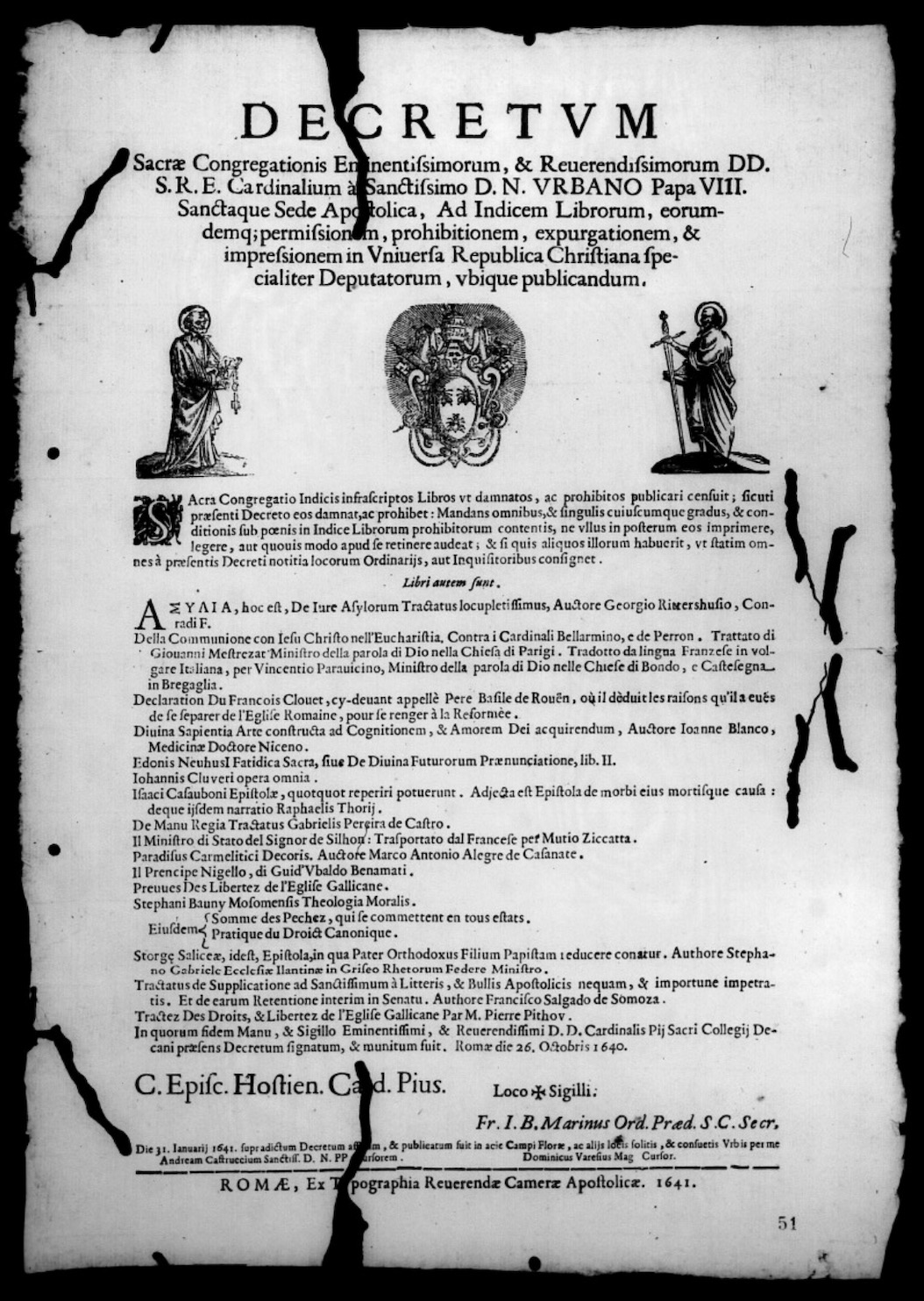 Cathedral Archives (Malta), Archives of the Inquisition of Malta, AIM Processi 55A, fol. 50r. (Malta Series I 2084 A)

One such example can be found in a broadside printed in Rome in 1641, now found in AIM Processi 55A, folio 50r. The decree—listing newly prohibited works—was promulgated on October 26, 1640, authorized for publication on January 31, 1641, and printed in Rome by the Typographia Reverendae Camerae Apostolicae. The printed broadside was then distributed. A print was sent to Malta, creating the opportunity for the Roman Inquisition in Malta to supplement its list and to demonstrate its efforts combating heresy by sharing the list with the Maltese parishes.

Local officials working for the tribunal of the Inquisition would also compile notes on particular books or create minor lists to help aid them in their proceedings. These lists could be topical, but usually involved general lists encompassing standards prohibited works by Protestant authors, vernacular devotional works without printer or publication date, recent scientific works (such as Galileo’s Dialogues), or Islamic works which entered Malta through property captured at sea. These lists supplemented the index and served as notes for Inquisitors during inquisitorial proceedings, as seen here in AIM Proc. Crim. 55 A, folios 49r and 52r. 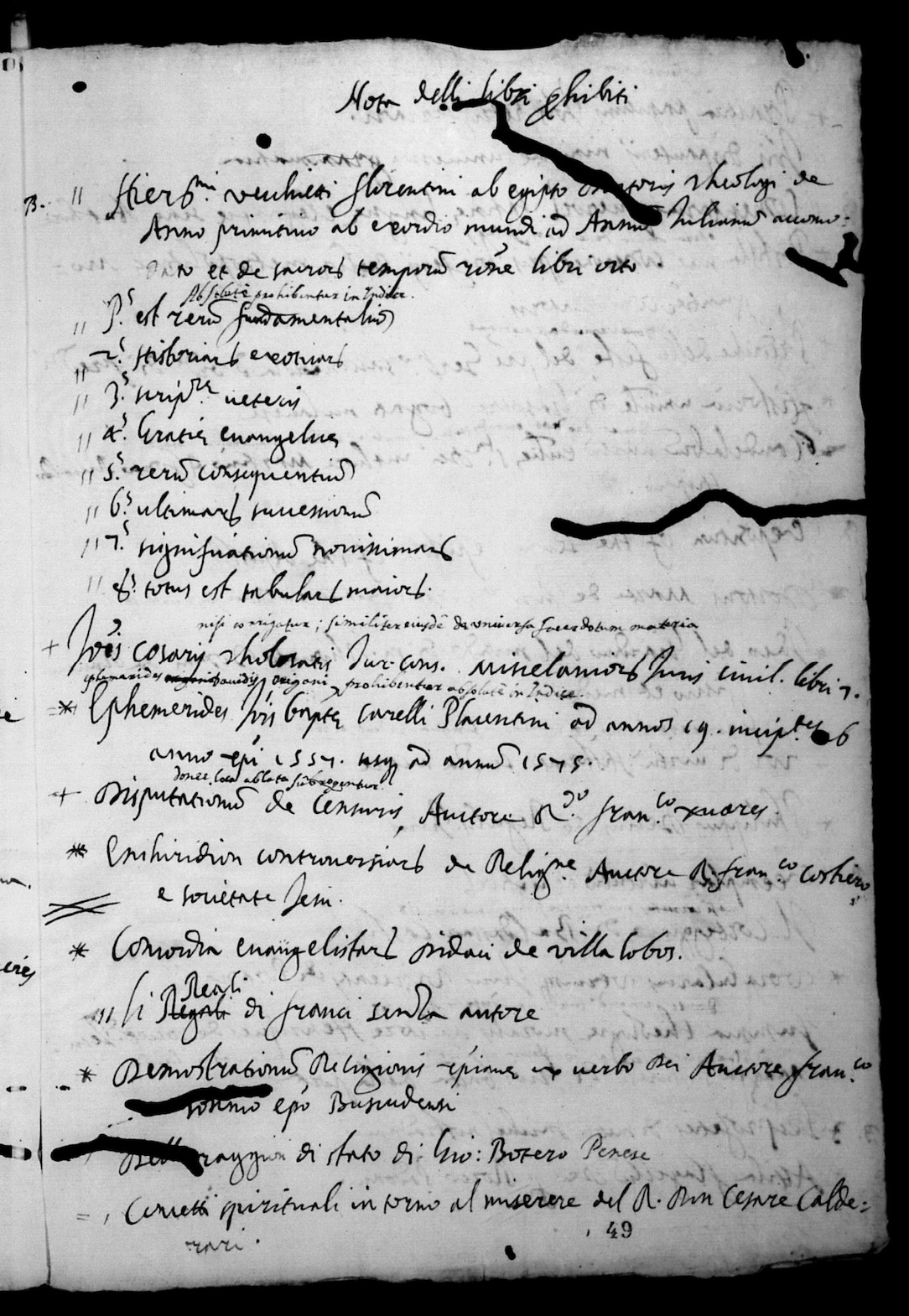 Cathedral Archives (Malta), Archives of the Inquisition of Malta, AIM Processi 55A, fol. 49r. (Malta Series I 2084 A) 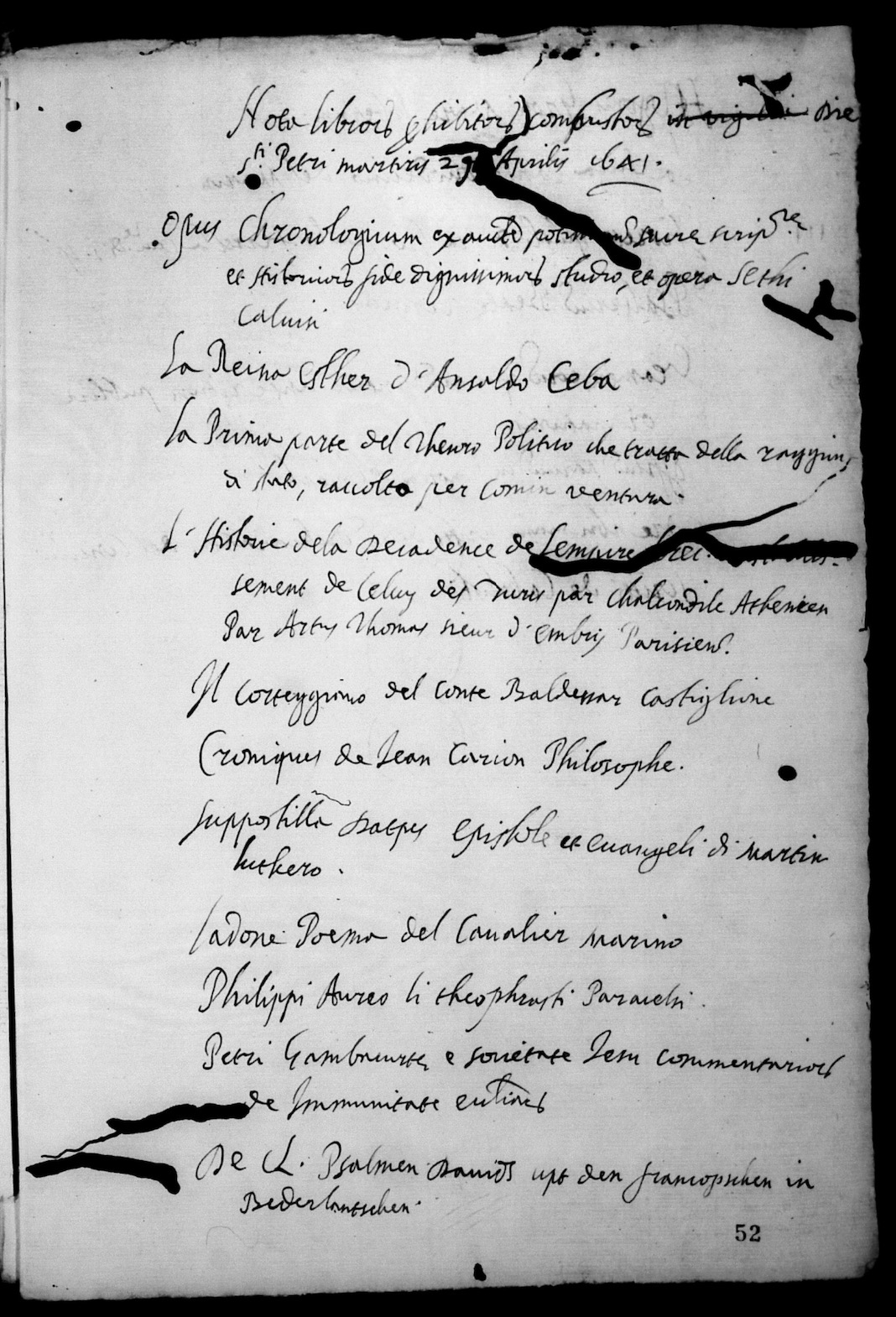 Cathedral Archives (Malta), Archives of the Inquisition of Malta, AIM Processi 55A, fol. 52r. (Malta Series I 2084 A)

Dr. Frans Ciappara, in his book Society and the Inquisition in Early Modern Malta, notes that letters from the Holy Office of the Inquisition in Rome to the Inquisitors in Malta provided another means to educate Maltese officials on the titles and authors of prohibited books.

Such official correspondence provides insights into the evolving concerns of the Church’s censors, and can show how certain literary dangers manifested urgency based on the political context or interests of the correspondents. A letter to Inquisitor Giacomo Caracciolo (1675–1718), dated 1708, notes that the Apologia per i Riformatori e per la Religione riformata (which was printed in Coira in 1706) should be immediately sent back to Rome. Another letter, sent to Inquisitor Innico Caracciolo (1642–1730) on March 22, 1687, lists a series of books printed in 1686 that were recently condemned in a brief issued by the papacy (see Ciappara, page 105). 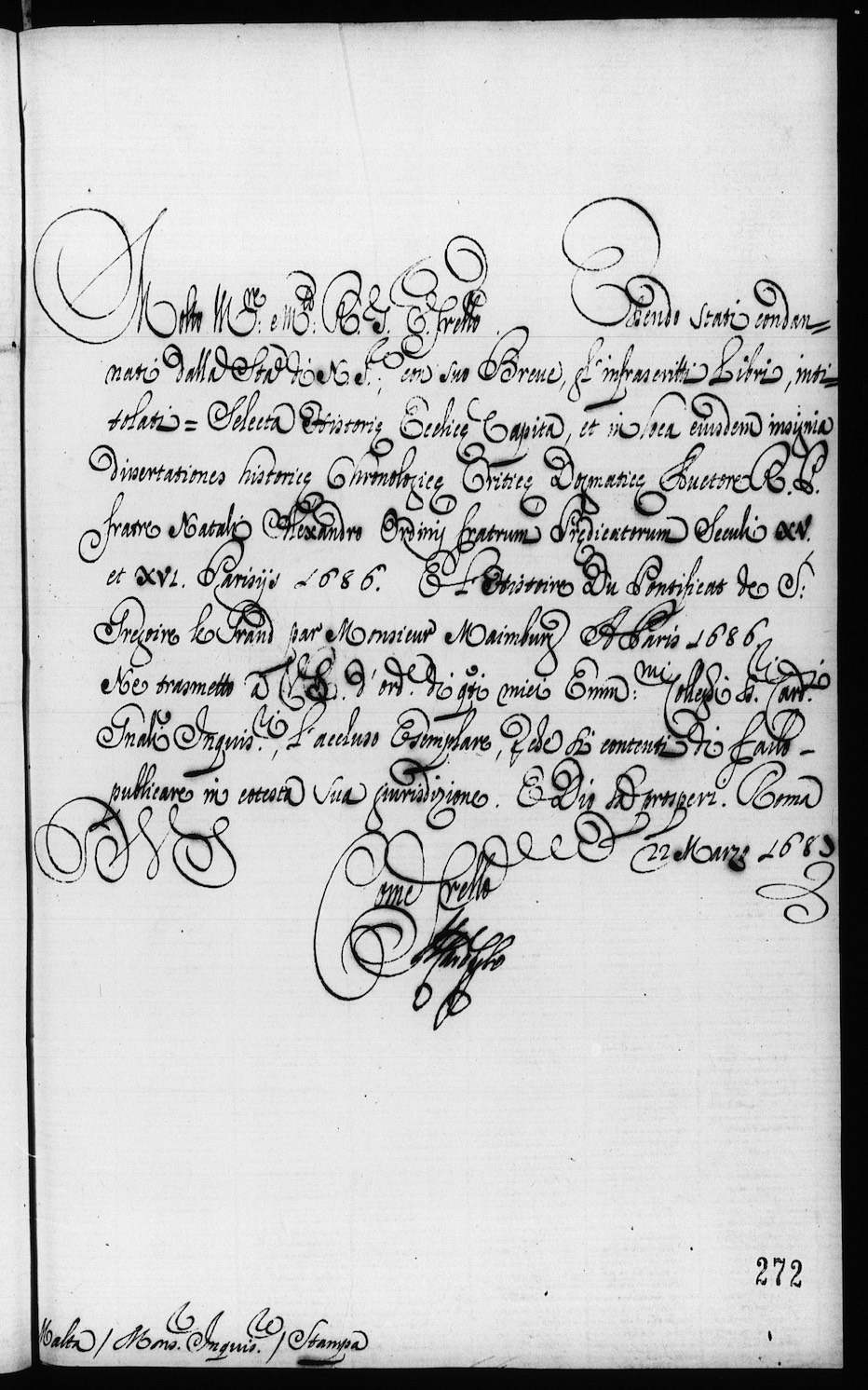 The Catholic Church understood that it could not completely stop the circulation or publication of prohibited books. The Index Auctorum et Librorum Prohibitorum offered one way to control and educate Catholics on the dangers of prohibited books and make authorities aware of the authors and titles that should be removed from the public.

However, the prohibited books were also more easily disseminated by the opportunities of printing multiple copies and the ease of copying prohibited works in manuscripts. This remained a singular problem for the Church as it fought against ideas deemed corrupting to the faith. To address the proliferation of seemingly dangerous literature, the Church required more than the Index; it required the active work of local authorities updating these lists, as well as a network of officials and institutions in communication. 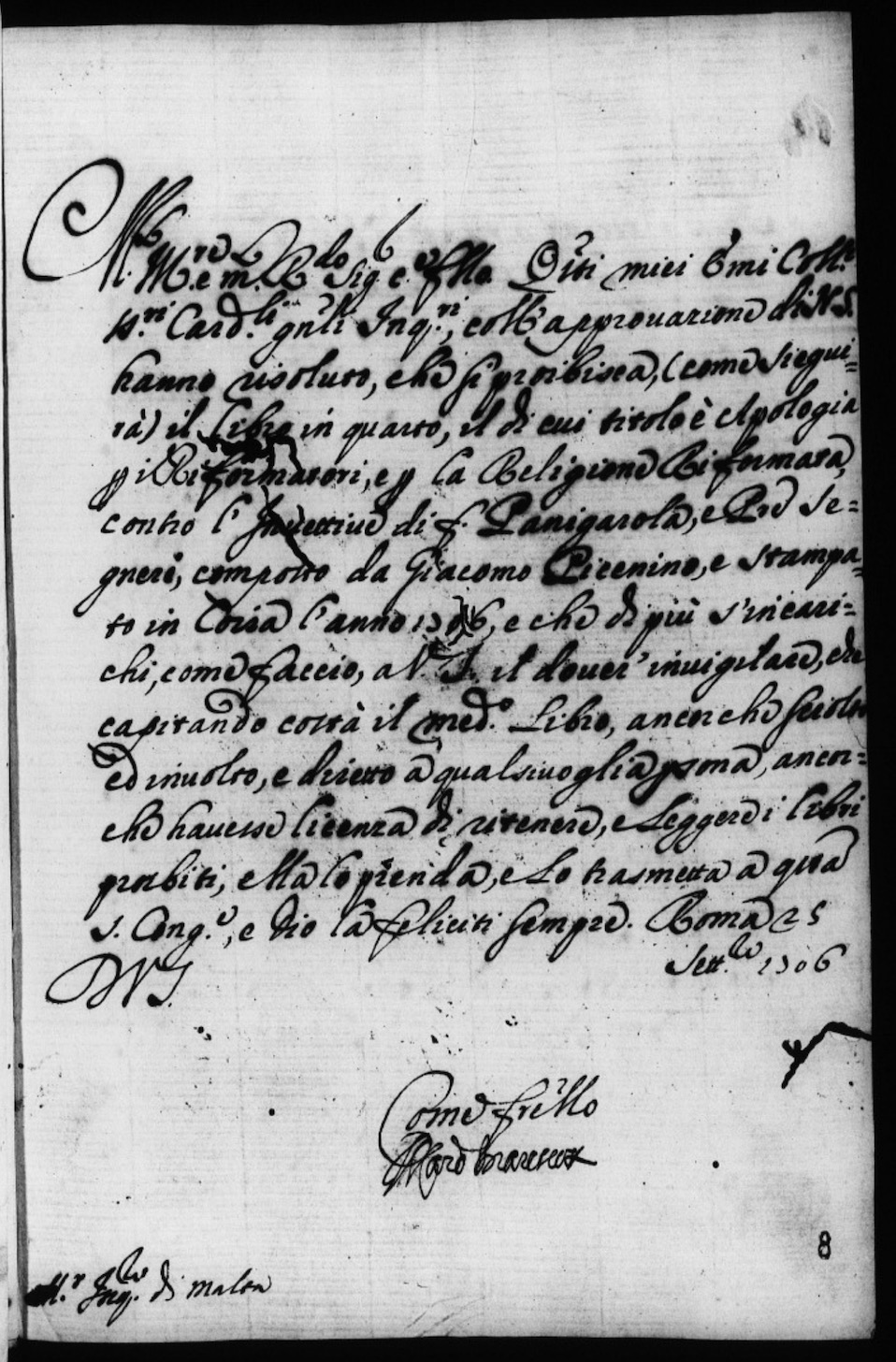 Frans Ciappara, Society and the Inquisition in Early Modern Malta (2001).

Andrew Vella, The Tribunal of the Inquisition in Malta (1964).