A Syriac Poem on Wine

This story is part of an ongoing series of editorials in which HMML curators and catalogers examine how specific themes appear across HMML’s digital collections. From the Eastern Christian collection, Dr. James Walters shares a story about Food.

In vino veritas (In wine there is truth)
—Pliny the Elder, Natural History, 14.28

Who doesn’t love a good glass of wine? White, red, or something in between, authors throughout history have praised the virtues of wine, while others have pointed out its vices. Indeed, the juxtaposition of the two sayings above, which are quoted by Pliny the Elder as common proverbs, summarizes popular attitudes toward wine in many cultures.

In medieval Christian poetry written in Syriac, wine poems in HMML’s collections generally fit within the genre of Syriac poetry known as sogīthā (plural: sogyāthā), which designates a particular structure and rhythm (usually paired couplets of 7 + 7 syllables). Some of these poems are presented as “dialog” or “dispute” poems, which feature different characters in conversation. Some are acrostic, with each stanza beginning with a successive letter of the Syriac alphabet.

While it is not always clear what context these poems were read in, at least some of them were incorporated into regular liturgies, especially in the East Syriac tradition. For example, see the manuscript DCA 00013, which includes a collection of liturgical poems collected under the title “Sogyātha which are recited on Sundays, Feast Days, and Memorials for the Whole Year.”

Wine Poems Are Best When Shared

There are multiple Syriac texts in HMML’s collections that might be called “wine poems,” but here we will focus on a single poem that appears in slightly different formats in manuscripts from both the West Syriac (Syriac Orthodox Church/Syriac Catholic Church) and East Syriac (Assyrian Church of the East/Chaldean Catholic Church) traditions. 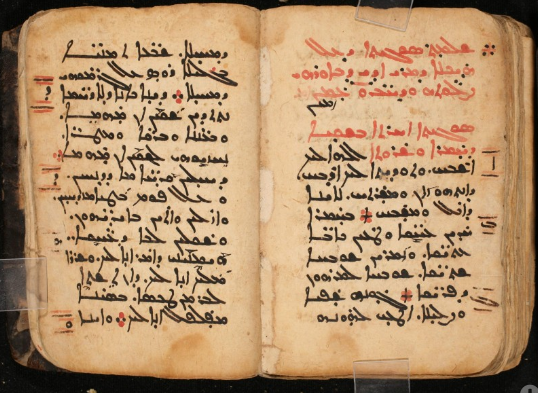 The beginning of an anonymous sōgithā on wine, in Serto (West Syriac) script. The letters in the margin help the reader follow the acrostic format. (DIYR 00202, fol. 137v)

One version of the poem is found in DIYR 00202 (beginning on fol. 137v), a 15th-century West Syriac manuscript in Diyarbakir, Turkey, and in SMMJ 00138 (beginning on fol. 109r), a 19th-century West Syriac manuscript in Jerusalem. The poem is presented anonymously in both manuscripts, and it is an acrostic. A comparison of the opening lines of the poem in these two manuscripts shows evidence of small editorial changes (underlined) over time, though most of the text remains unchanged:

Despite slight changes in precise wording (and other similar changes throughout the rest of the poem), it is obvious that these two manuscripts bear witness to (more or less) the same version of the poem. 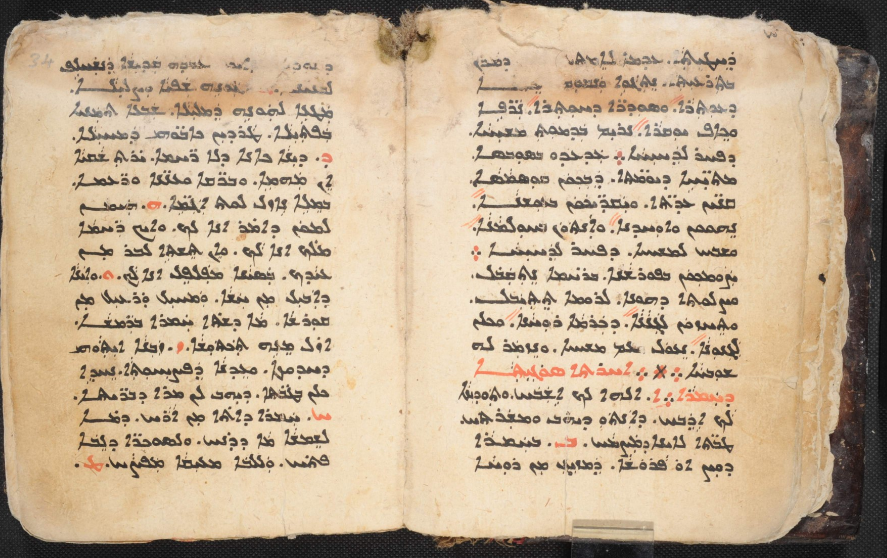 The beginning of a sōgithā on wine, attributed to Khamis bar Qardaḥe, written in East Syriac script. The inline letters in red ink indicate new stanzas of the acrostic poem. (CCM 00429, fol. 33v)

The same cannot be said, however, for a third witness to this text, which appears in at least two East Syriac manuscripts: CCM 00429 (beginning on fol. 33v), a 16th-century manuscript in Mardin, Turkey, and APSTCH THRI 00025 (beginning on fol. 79r), a 19th-century manuscript in Trichur, India. While the West Syriac version is presented anonymously, this East Syriac version appears in collections of sogyāthā generally attributed to the 14th-century author Khamis bar Qardaḥe. In fact, some manuscripts (like APSTCH THRI 00025) contain an entire collection of “sogyāthā on wine” attributed to Khamis, though not every poem in the collection is actually about wine. 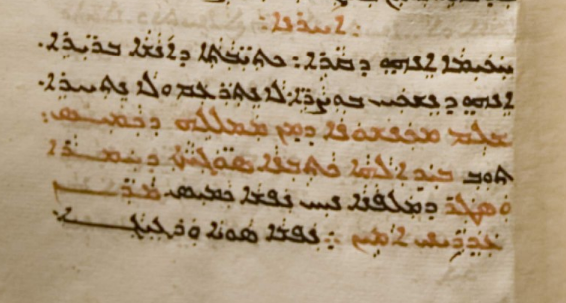 In the version attributed to Khamis, the first three lines have virtually the same wording as the West Syriac poem, but the text that follows is distinct, as seen (underlined) in this excerpt from CCM 00429 (16th century) and APSTCH THRI 00025 (19th century):

I praise you, God,
and I offer thanks to you as a sacrifice,
for it is you who gives and makes abundant
good things for anyone who shines.
Exult in wine, o discerning one,
for it was mixed by the Holy Spirit
in such a way that [the Spirit] makes it holy
so that humans might be transformed.

The rest of the poem shares wording with the West Syriac version, but also departs from it significantly. It is difficult to ascertain which version of the poem is the “original,” though it is worth noting that Khamis is known to have taken other poems from the West Syriac tradition and adapted them, as is the case with the poem “On Perfection,” originally by Bar Hebraeus, which Khamis expanded into a new work. Given the fact that this poem circulates in both West and East Syriac manuscripts, and considering Khamis’ established habit of borrowing poetry, it is likely (though not certain!) that the West Syriac version is the original.

The uncertainty regarding the origin and transmission of this poem simply points to the need for more interest in the broader tradition of wine poems in the Syriac tradition. So, pour yourself a nice glass of wine, and start reading some Syriac poetry!

ABOUT THE AUTHOR: Dr. James Walters is cataloger of Syriac manuscripts at HMML.
Story Tags:
All StoriesCollectionsEditorialsSeries - Food
Share:
Previous Story
Next Story