This story is part of an ongoing series of editorials in which HMML curators and catalogers share their discoveries, focusing on a theme that travels throughout HMML’s collections. Examining the theme of Medicine, Dr. Daniel K. Gullo shares this story from the Malta collection.

The Archivum de Piro in Valletta, Malta preserves a small invoice (giustificazione di pagamento) and payment that records the medical treatment of household slaves during the 18th century. The document, dated 16 November 1726, records how Fra’ Juan Pablo de Arriaga (1685-1756), a Knight of Saint John of Jerusalem and one of two rotating prodomi in charge of the main slave prison (Gran Prigione) in Valletta, charged Baron Giovanni Pio de Piro (1673-1752) the fee of four scudi for the treatment of the baron's slave Mustafa Osmon. Mustafa’s illness required 12 days of care in the slave prison's infirmary. The document does not record the nature of the illness, nor the treatment that Mustafa received, but only the time spent in the infirmary to account for the cost of Mustafa’s care. 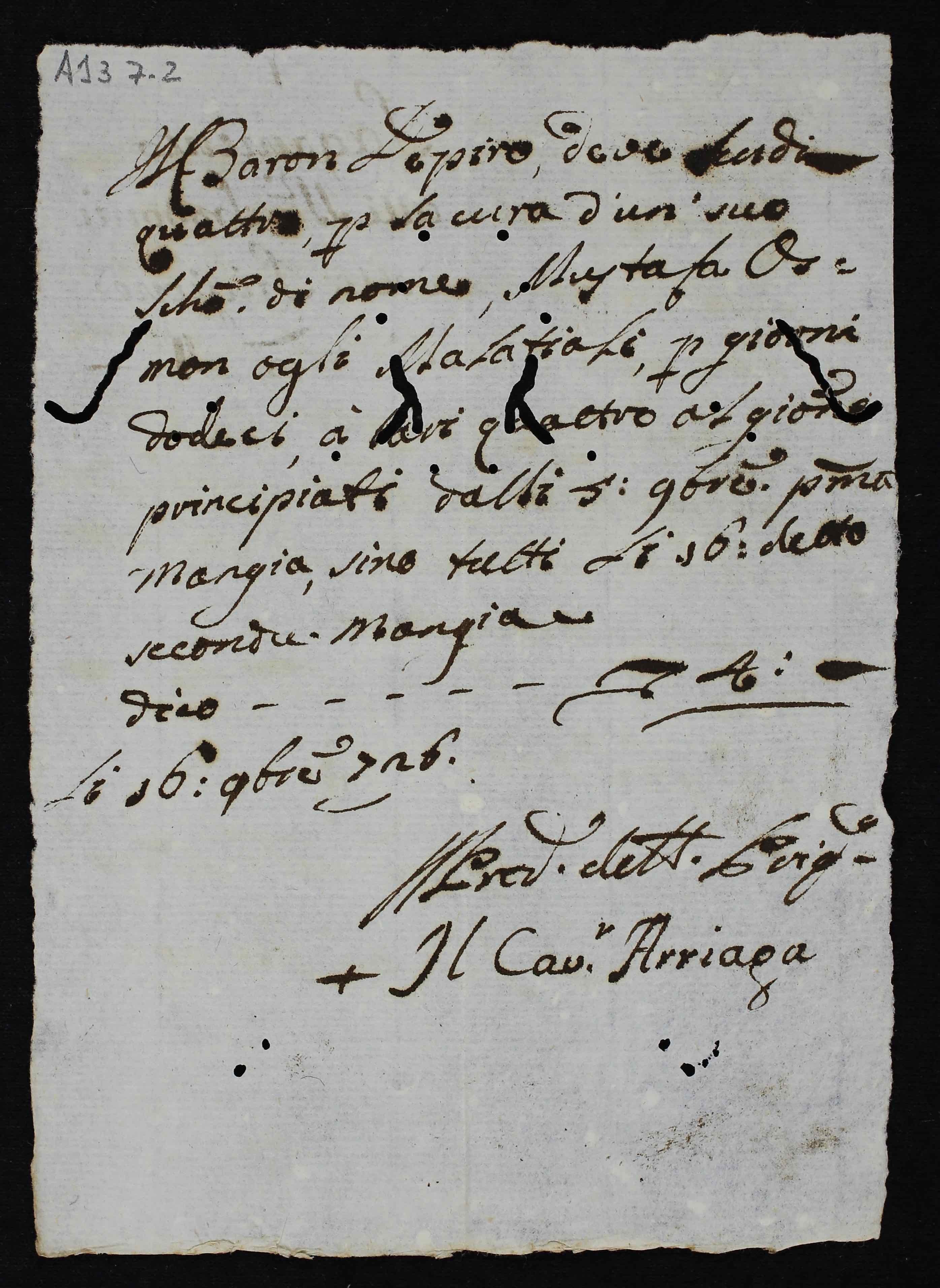 Transcription of the document

Get a closer view of this document

Regulations enacted at the Order of Saint John of Jerusalem's General Chapter of 1631 stipulated that private slave owners could bring infirm slaves to the prison infirmary in Valletta. Each day the prison’s doctor and surgeon would visit the sick and recommend treatment, for the cost of four tarì per day. During their rounds medical staff were accompanied by one of the two prison administrators, or prodomi, Knights of the Order of Saint John of Jerusalem that governed the prison. Slaves undergoing treatment at the prison were divided by religion, with Christian, Muslim, and Jewish slaves assigned separate rooms, though Christian slaves could at times be treated at the Order’s primary hospital in Valletta, the Sacra Infermeria.

The medical care of slaves reinforced the patriarchal structure of the owner-slave relationship. It also recognized the valuing of enslaved people as property subject to substantial investment on part of the owner. At this time, the average cost of a male slave between 16 and 40 years of age was 125-250 scudi. Owners would protect the value of their investment by paying for medical treatment if the need arose. There were also legal and religious reasons behind the medical treatment of slaves. Roman law offered some protections to slaves against mistreatment, while Christian concepts of charity developed during the medieval and early modern period argued for moderation and that basic care be afforded to slaves by their owners.

The Knights of the Order of Saint John of Jerusalem, as a religious order and as sovereigns of the island of Malta, paid close attention to the conditions of slaves in Maltese society. The medical care of slaves stemmed from the Order's obligations as a hospitaller religious order to care for the sick. It also responded to military and financial necessity, since slaves were needed to man the Order of Saint John’s galley fleet, while slave labor and the sale of slaves were crucial to the island’s economy. From there, it was only natural that obligations that governed the Knights’ treatment of their own slaves would extend to the Maltese nobles, who lived under their rule.