Tracing Folktales in Magic Texts — The Story of Umm al-Ṣibyān

This story is part of an ongoing series of editorials in which HMML curators and catalogers examine how specific themes appear across HMML’s digital collections. Following a Story Time theme, Dr. Celeste Gianni shares these tales from the Eastern Christian collection.

Despite having been contested in Islamic history by powerful groups rejecting them as illegitimate practices, magic and divination are recurring subjects in the Islamic written heritage. Such texts were linked to a wide range of practices that required the help of magic, including healing, interpreting dreams, predicting the weather and future events, and—for all activities of daily life—casting protective spells against the evil supernatural powers.

Many of these texts relied on the rich literary heritage of folktales and stories that circulated regionally. Looking at magic texts can, on the one hand, enrich our knowledge of known folk stories and their dissemination in the context of magical text production. On the other hand, these magical texts can contain original material on folk stories that are less known and that have been left behind in other literary contexts.

Manuscript USJ 00277, in the collection of the Bibliothèque Orientale at the Université Saint-Joseph (Beirut, Lebanon), is a multi-text volume containing three texts about magic and alchemy, each extracted from a different manuscript and put together in this quirky volume that even has a cut-out from a match box to decorate the back cover. 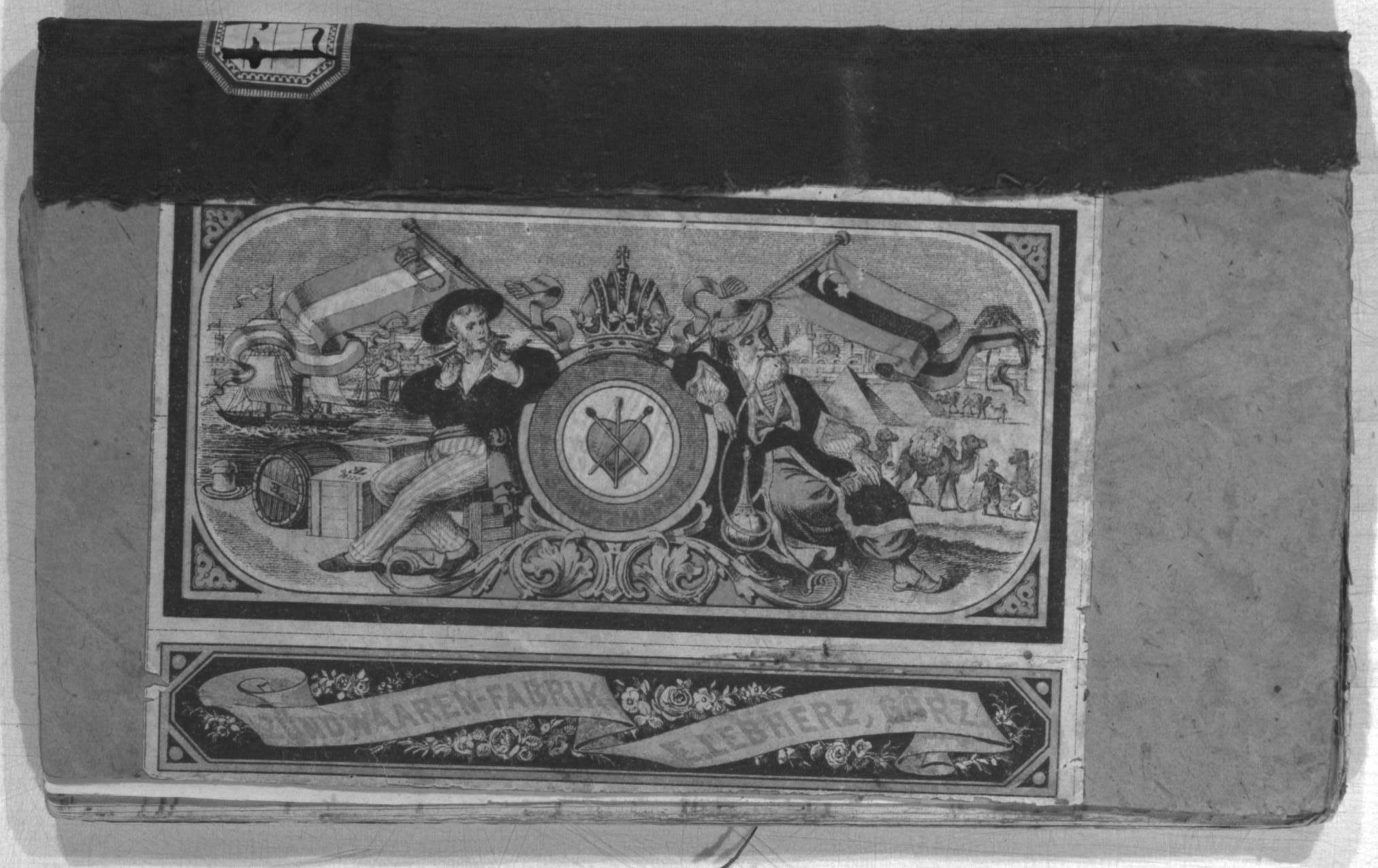 In between Abū Jāmūs’s Manual on rhapsodomancy (fol. 1r-23r) and a Christian text on protective amulets (fol. 58r-74v), is a 19th-century text on magic spells and charms, rich in drawings of monsters and demons, magic squares, and charms written with secret alphabets. It is divided in abwāb (chapters), each related to a specific spell or charm, describing its recipe and its use.

Texts such as this one are not uncommon in the Islamic manuscript tradition. For example, manuscript IES 00286 at the Institute of Ethiopian Studies (Addis Ababa University, Ethiopia) includes a text on magical prayers and amulets used to control Jinn and is characterised by numerous anthropomorphic and zoomorphic illustrations of fantastical beasts that are similar to the ones found in USJ 00277. Across the continent are further similarities: the structure of the text in USJ 00277 resembles the structure of the widespread genre of Fawāʼid texts in the West African manuscript tradition; in this genre are lists of recipes (each called fāʾidah) for incantations and spells for aid in all sorts of life situations. HMML catalogers Dr. Paul Naylor and Dr. Ali Diakite are currently working on a project dedicated to identifying the characteristics of this specific genre.

In general, Fawāʼid are characterised by the use of encrypted messages via secret alphabets and magic squares. Some manuscripts provide the correspondence tables for such magic alphabets, but these decoders are different across regions and periods. An example of a conversion table that could match the secret alphabet used in the text of USJ 00277 is in SAV ABS 07368, part of the collection of Aboubacar Bin Said Library (Timbuktu, Mali). 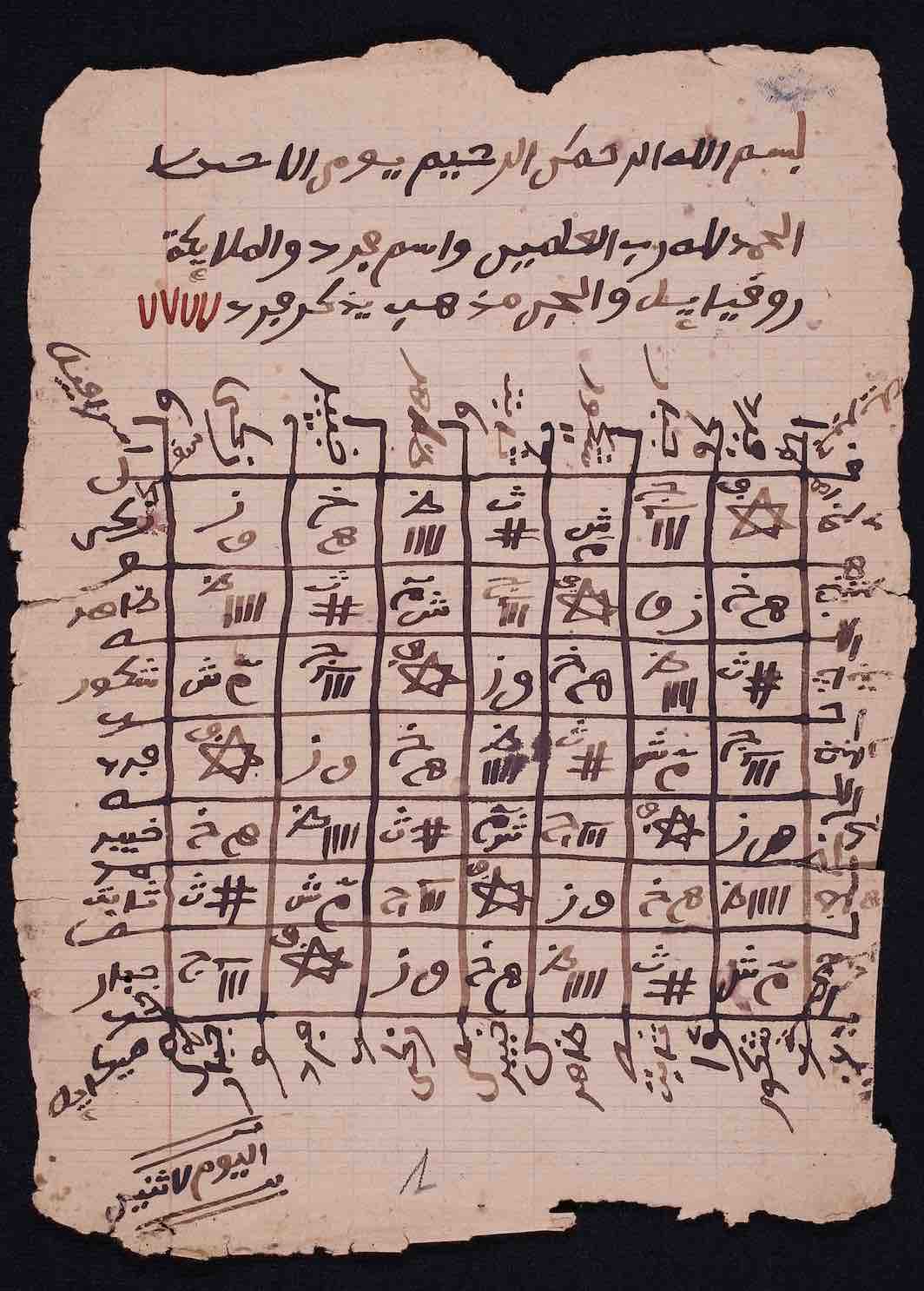 Sample of a conversion table for magic alphabets found in manuscript SAV ABS 07368, part of the collection of Aboubacar Bin Said Library in Timbuktu, Mali.

The story of Umm al-Ṣibyān

One chapter (fol. 41r-43r) of USJ 00277’s text on magic spells and charms is dedicated to protection against a monster called Umm al-Ṣibyān (literally, “mother of boys”), also called Tābiʿah. The literary traditions related to this monster are very common in the rural regions of Yemen, but the demon is also known in Iran and neighboring countries, by other name variants, as the cause of the death of newborn babies.

The monster is usually described as an ugly female jinn with cow legs who disguises herself as a beautiful woman that appears at night or before dawn and kidnaps men and marries them; she may also cause death or madness to whoever sees her in her true form; and she can also eat humans, especially children. 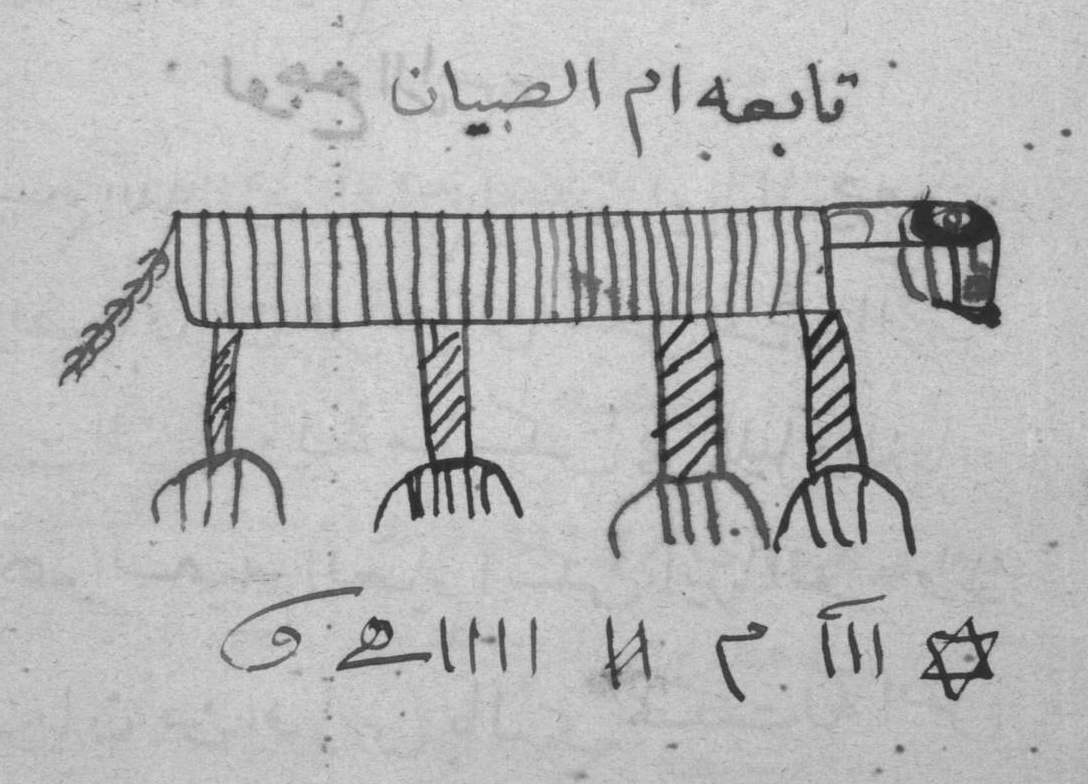 Illustration of Umm al-Ṣibyān. Below, the magic spell that corresponds to a spell supposedly found in Ali’s sword Dhū al-Fiqār. (USJ 00277)

Umm al-Ṣibyān shares similar characteristics with other female demons of the regional context, in particular with ʿAnāq—Adam’s daughter, described as a freak of nature and the first to practice evil magic—and Lilith (Adam’s first wife) who, in some traditions, refused to lie underneath him during intercourse, considering herself as Adam’s equal, and flew away when he tried to dominate her. In the Sumerian tradition, Lilith was also depicted as a she-demon.

The term “umm al-ṣibyān” was used later in medicine to describe infant colic and epilepsy, as well as scarlet fever. Charms and plants considered to have magical powers were used to protect children against those conditions. USJ 00277’s text of charms and spells not only provides a drawing of the monster (fol. 43r)—it also gives instructions on how to be protected against the monster through the use of a charm written with a secret alphabet, corresponding to the charm that the text claims was written on Imām ʿAlī’s famous double-bladed sword, Dhū al-Fiqār.

Illustration of Ali’s sword Dhū al-Fiqār, with the magic spell written with a secret alphabet. (USJ 00277)

The Arabic letters in this charm seem to correspond to the first line of the conversion table of the secret alphabet in SAV ABS 07368, and if this is true, the charm would be made, in order, by the following letters: Yā, Jīm, Shīn, Thā, Ḍāḍ, Khā, Zāy. These letters are most probably a sort of magical spell with no related significance in ordinary speech.

Deciphering the magic spell found below the drawings of Ali’s sword Dhū al-Fiqār and of Umm al-Ṣibyān in USJ 00277, using a conversion table found in SAV ABS 07368.

The libraries of more than 800 repositories worldwide are freely available in HMML Reading Room, making it a great platform to explore magic texts that can provide further evidence and information about the dissemination of regional folktales. Comparing them could enrich our knowledge on the subject across different regions, languages, and timeframes. In this case, the folktale of a child-killing monster and the related magical practices are a good example of how people tried to cope with one of the most tragic events in life, the loss of children. The fact that this text belongs to a manuscript that incorporates other texts from both the Muslim and Christian traditions, also shows how certain themes and practices were shared beyond religious differences for the sake of resolving a common issue. 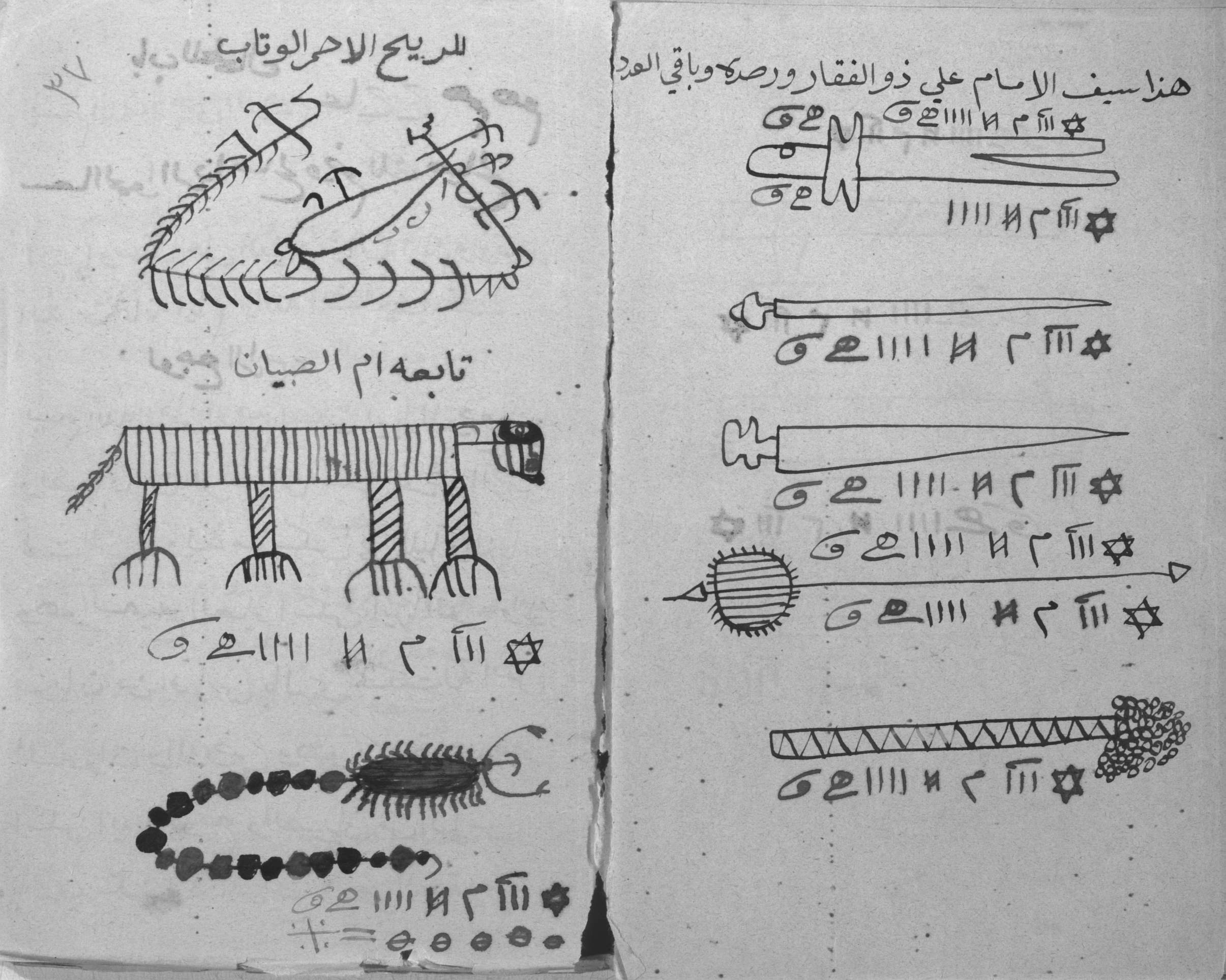 Magic spells and charms in USJ 00277, part of the collection of the Bibliothèque Orientale at the Université Saint-Joseph, Beirut, Lebanon. (USJ 00277)
ABOUT THE AUTHOR: Dr. Celeste Gianni is cataloger of Arabic manuscripts at HMML.
Story Tags:
All StoriesCollectionsEditorialsSeries - Story Time
Share:
Previous Story
Next Story