Creating Relationships — Sharing the Past to Build Toward Future Scholarship

April 7, 2022
Creating Relationships — Sharing the Past to Build Toward Future Scholarship

HMML Authority File is a new open-access database created as part of a grant from the National Endowment for the Humanities (NEH) to facilitate the sharing of data from understudied manuscript traditions.

For more than 55 years, HMML has worked to preserve handwritten traditions that range across historical, geographic, and cultural boundaries. Since 2016, this has involved a concerted effort to carefully establish name authorities—standardized language that uniquely and consistently identifies people, organizations, families, works, and places to distinguish their identities in library systems and scholarship. 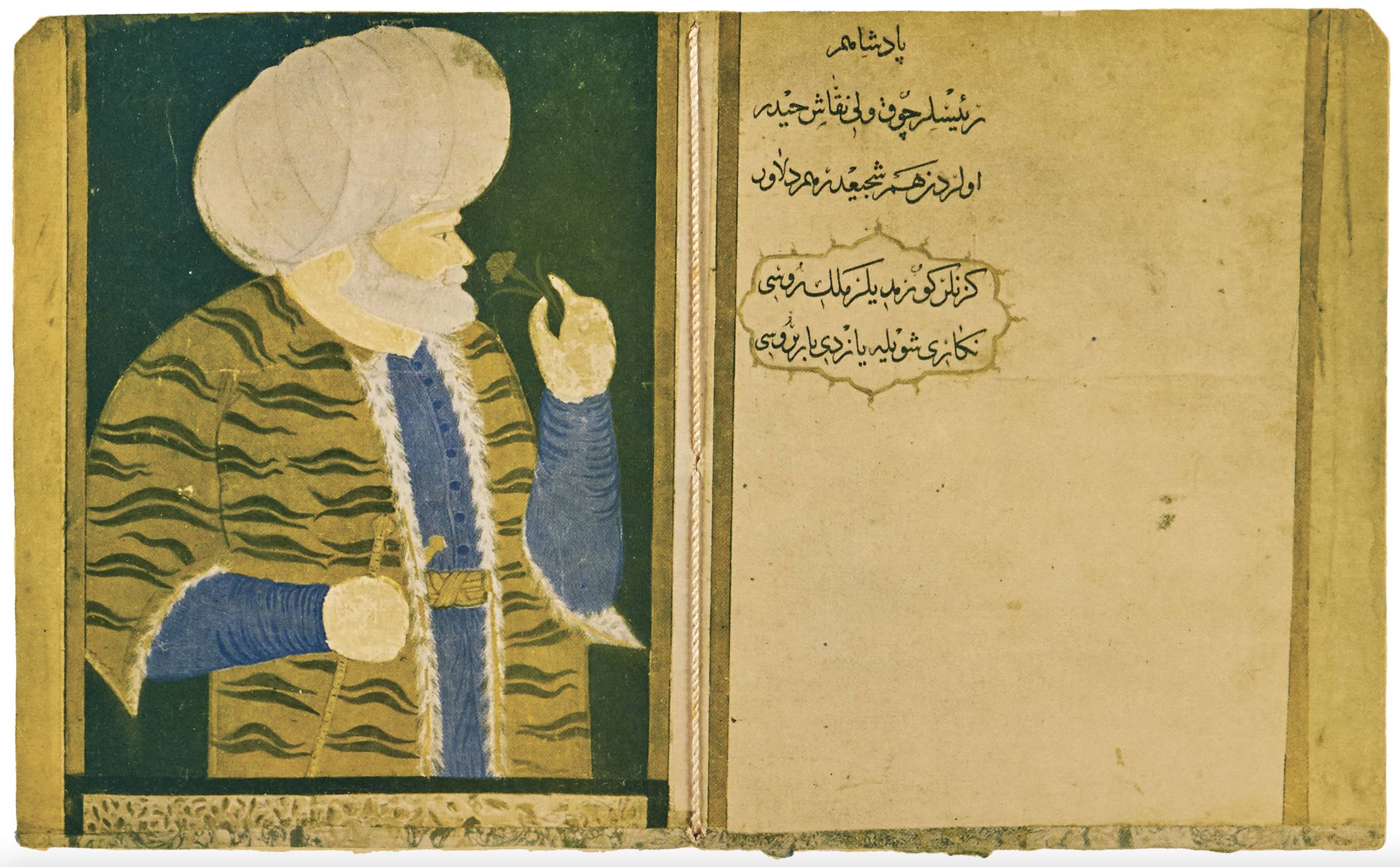 A portrait of Barbarossa accompanies an Ottoman Turkish poem in praise of the admiral. HMML Authority File contains authorities describing the author of the poem (Nigâri), the subject (Barbarossa), and the museum that owns this object (the Palazzo Falson Historic House Museum in Mdina, Malta). (PFL 00023)

Through HMML Authority File, these valuable identifications can be recorded and widely shared. Because HMML preserves materials from traditions that are often underrepresented in Western scholarship and librarianship, the database contains a growing body of knowledge that bridges linguistic and scholarly divides. Thousands of names will, for the first time, be represented in established international authority files like the Library of Congress and the Virtual International Authority File, helping libraries and researchers identify and link manuscripts and collections.

Part of the joy of studying and preserving manuscripts is that each object is unique—a legacy of the hands, hearts, and minds of the cultures and people that produced it. Manuscripts tell us stories of the individuals who wrote and used them and who were part of a lineage of passing the texts forward to the next generation. Their authors engaged in discourse with others, and texts traveled from one place, language, or religious tradition to another. Over time, some texts may have been copied in part or without titles, author names translated or shortened, and texts originally found together separated.

Learning about and rebuilding knowledge lost over time involves creating a common language with which to talk about people, texts, and places, and the relationships between them. This is a key job of professional librarianship: creating an infrastructure to establish a common language (like name authorities) for identifying the people and texts the manuscripts contain.

Each new record in HMML Authority File represents a cooperative, ground-up approach to scholarship. When a HMML cataloger encounters a new text or author in a manuscript, they work with a team of curators and catalogers to responsibly document the entity, either through information in the original manuscript or through additional research, often using non-Western sources. The metadata librarian (yours truly) then standardizes the data following international guidelines to facilitate sharing. This creates reliable, transparent data that can be used and evaluated by others around the world.

A web of interlinked authors and texts grows with each new manuscript that is cataloged. HMML Authority File data is used to identify every instance of a name in our library systems, and catalogers create links to group and unite related records in completely different collections so they can be studied together. This is particularly important for traditions that have been siloed by language barriers—linking, for instance, a Syriac hagiography that has also appeared in Arabic, Geʽez, and Latin.

Many authors and texts now in HMML Authority File had no representation in modern authority databases. For example, HMML created the first authorities for the works of the Muslim timekeeper Mustafa bin Ali, whose astronomical writings were foundational within the Ottoman Empire, and Ruqayyah bint Muḥammad ibn Saʻd, a female poet from what is now modern-day Nigeria. Even authors who have been translated and studied extensively within a scholarly community, such as Zar'a Yā'eqob, Emperor of Ethiopia, wrote works that had not been established as authorities within a library context. 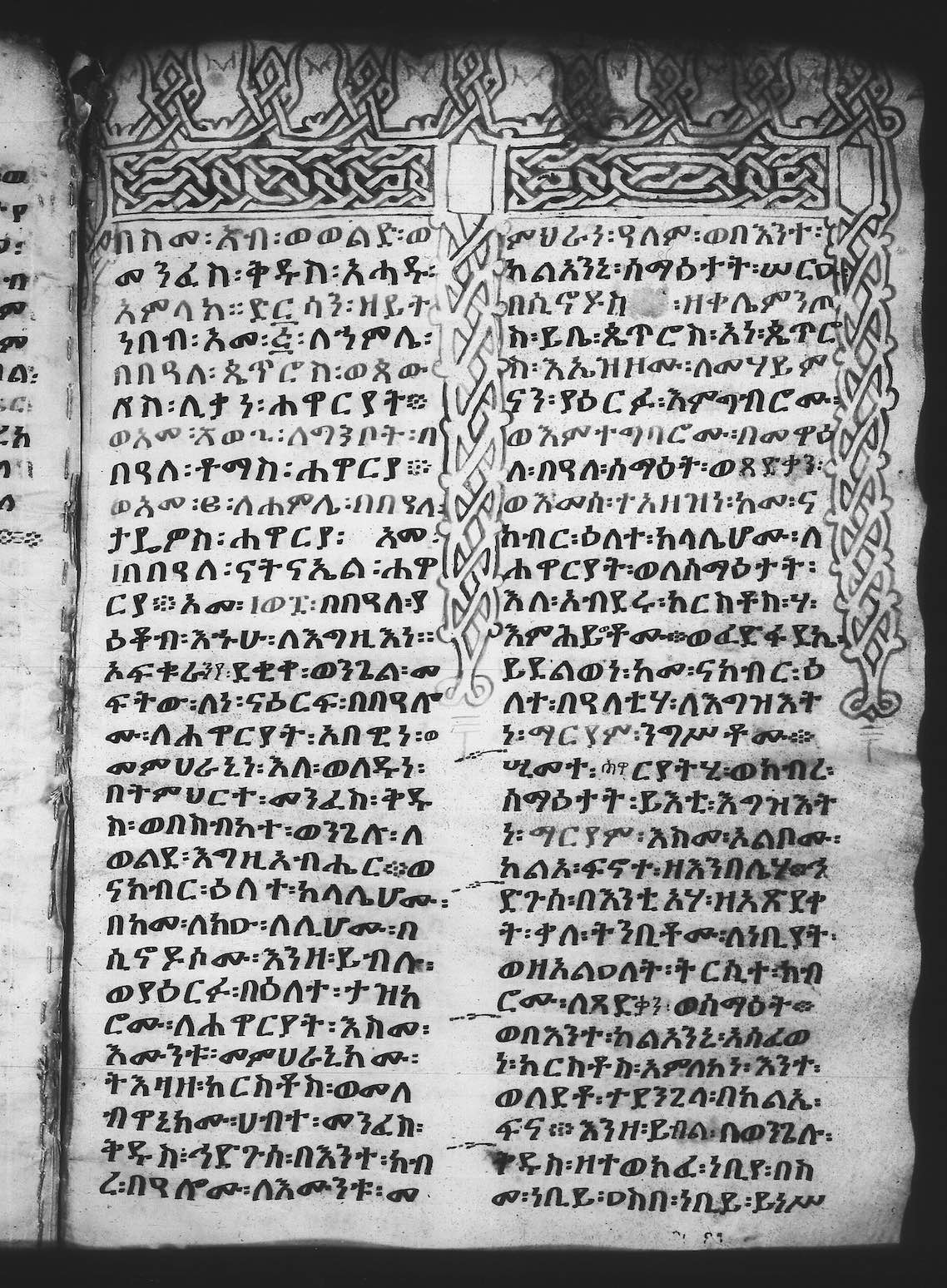 This manuscript (EMML 1480), microfilmed at Dabra Māryām Monastery in Eritrea, was made in the mid-fifteenth century during the reign of Emperor Zar’a Yā’eqob. More than half of its pages contain writings yet to be attested anywhere else, including several by Zar’a Yā’eqob. His Ṭomāra Tesbe‘t (“Epistle of Humanity,” pictured) is one of the many unique texts of EMML 1480 that Professor Getatchew Haile cataloged, translated, and published.

There are more than 16,500 authorities in HMML Authority File today, with tens of thousands more expected, both from the migration of HMML’s legacy data and from the constant work of HMML’s prolific cataloging team.

The database is built for manuscript researchers, catalogers, and libraries to find, group, and download open data for use in their own work. The search interface is user friendly, so that someone can quickly find, for example, all the persons within HMML’s collections who were active in eighteenth-century Turkey. At the same time, the innovative, sophisticated design allows for more detailed search queries, such as finding texts by non-Latinate script or by author, title, or incipit (the first line of a text, particularly useful when the title has been left out or lost). In the future, HMML Authority File data can be harvested automatically via an API for use in large-scale work.

HMML Authority File is a groundbreaking project that creates basic library infrastructure for collection caretakers who might not have the resources to devote to this task. The system is free to use, open access, and intended to be a permanent, growing resource. It professionalizes cataloging, bringing the scholarly expertise of HMML further into the realm of technological innovation and data management.

ABOUT THE AUTHOR: Dr. Catherine Walsh is director of cataloging at HMML.
Story Tags:
All StoriesPreservation ProjectsNews
Share:
Previous Story
Next Story