April 11, 2017
HMML Partners with the Institute for Advanced Study to Share Threatened Manuscript Heritage from Yemen and Neighboring Countries

HMML is collaborating with the Institute for Advanced Study in Princeton, New Jersey, to provide open access to approximately 15,000 digitized Zaydi manuscripts from Yemen and neighboring countries. The three-year project will help support and make accessible the Zaydi handwritten heritage—a heritage that is on the verge of destruction in Yemen.

The Zaydi literary tradition is among the richest and most variegated traditions within Islamic civilization and at the same time, one of the least studied. Zaydi scholars produced manuscripts for over one thousand years covering a wide spectrum of traditional disciplines. 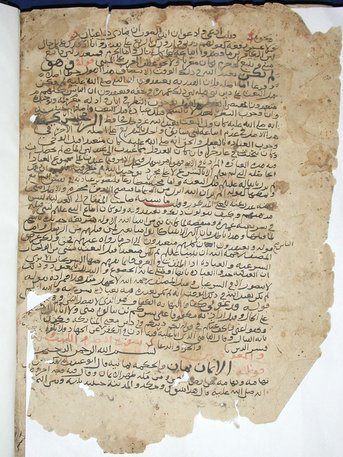 A commentary on a religious text, on paper, without an extant title. Possibly 12th century. HMML Project Number ZMT 00561 on vHMML Reading Room

The project, “The Zaydi Manuscript Tradition (ZMT),” consists of two components: a digital portal on the website of the Institute for Advanced Study,[1] and manuscript images with catalog records in vHMML Reading Room, HMML’s online manuscript resource. vHMML Reading Room, www.vhmml.org, gives registered users free access to HMML’s photographic manuscript archives from around the world. Through the ZMT Portal and vHMML Reading Room, scholars around the world will be able to access Zaydi manuscripts from libraries in Yemen and neighboring countries, as well as those held by major libraries in Europe and the United States that have generously allowed access to their collections. Prominent among them are hundreds of Zaydi manuscripts microfilmed by HMML at the Austrian National Library in Vienna. Through the ZMT project scans of these films are now available in vHMML Reading Room.

“These measures will effectively democratize access to the Zaydi Manuscript Tradition, resulting in an upsurge of this important field of study and will serve as a model for other fields within Islamic Studies where scholars face similar challenges. Moreover, for the first time scholars in Yemen will have unlimited access to their own intellectual, cultural and religious heritage as reflected in the Zaydī manuscripts preserved in Europe, North American, and other Middle Eastern countries. At the same time, the ZMT project will help to bring more of the enormous richness and intellectual diversity of Islamic culture to the forefront and make it accessible to everyone,” said Sabine Schmidtke, Professor of Islamic Intellectual History in the School of Historical Studies at the Institute for Advanced Study.

“Worldwide, there are only a few million Zaydis today, but historically the Zaydiyya, a branch of Shii Islam, has been prevalent in parts of Yemen, Iran, and the Hijaz,” said HMML’s Executive Director Father Columba Stewart, OSB. “Zaydi scholars’ writings on legal theory, medicine, mathematics, theology and literature, remain a major influence on the history and thought of the Muslim world. As Yemen’s civil war escalates, many of these manuscripts are at great risk of destruction.”

"The ZMT project will help to bring more of the enormous richness and intellectual diversity of Islamic culture to the forefront and make it accessible to everyone,” - Sabine Schmidtke