The Hill Museum & Manuscript Library (HMML) of Saint John’s University has received an award of $38,500 from the Cultural Emergency Response program of the Prince Claus Fund for Culture and Development, based in the Netherlands. 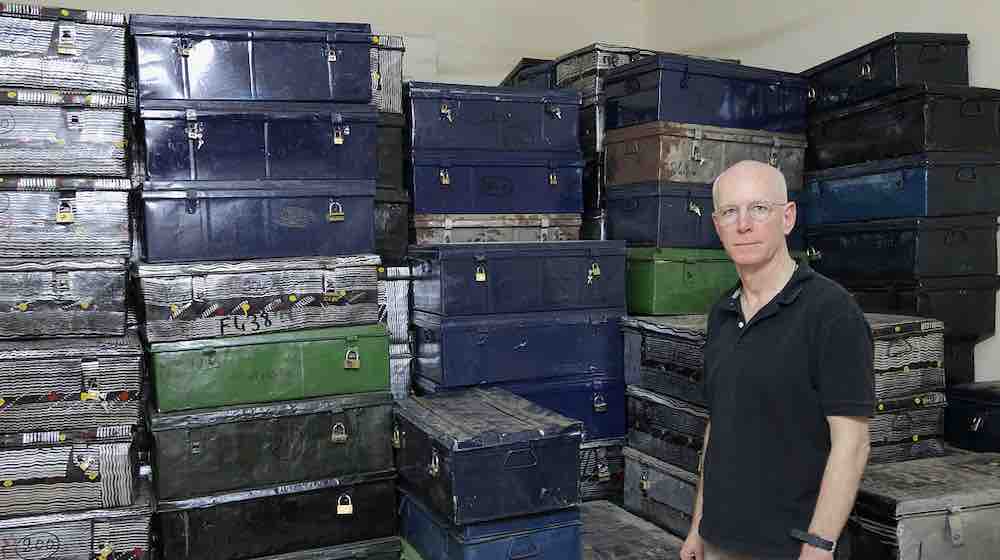 The grant will help support the first year of a project to create digital copies of over 300,000 manuscripts from Timbuktu dating from the 12th to 19th centuries. The manuscripts, belonging to many of the ancient families of Timbuktu, have been entrusted to SAVAMA-DCI, a non-governmental organization led by Abdel Kader Haïdara, a member of one of the families.

When Timbuktu’s ancient libraries were in danger of destruction by Islamist militias during the capture of Timbuktu in summer 2012, the Prince Claus Fund supported local efforts led by Haïdara to remove the threatened manuscripts to safety in Bamako, the capital of Mali some 450 miles south of Timbuktu. The Prince Claus Fund is now helping HMML’s effort to digitize the manuscripts, stored in more than 2,000 metal boxes kept in secure locations around Bamako.

Fr. Columba Stewart, OSB, HMML executive director, and HMML staff from Beirut and Collegeville have traveled to Mali twice in the last eight months to set up digitization studios and conduct training sessions for the local team at SAVAMA-DCI, which will make a digital record of the manuscripts. Since late December, the technicians in Mali have been working steadily with two complete studios. This project has the potential to be one of the largest efforts in HMML’s 49-year history.

The manuscripts held in the family collections under the care of SAVAMA-DCI originate from Africa, the Middle East and the Islamic centers of medieval Spain. They include Islamic religious texts as well as secular works pertaining to topics as varied as poetry, literature, medicine, commerce and diplomatic relations. There are also many letters and other archival materials.

“These manuscripts provide us privileged access to the extraordinary history of Timbuktu, at one time the capitol of a great empire and for many centuries a center of learning and commerce,” Stewart said. “By digitally preserving these texts, we can ensure that their content will be safe and available to scholars in Mali and around the world.”

HMML will oversee the digitization effort and make the images available through its digital platforms. HMML will also sustain the digital image collections into the future as a service to the families of Timbuktu.

Based in the Netherlands, The Prince Claus Fund was established in 1996 as a tribute to Prince Claus’ dedication to culture and development. The Fund supports the work of innovative and high quality cultural institutions, particularly in places where resources and opportunities for cultural expression, creative production and research are limited due to conflict, poverty, repression, marginalization or taboos. It also provides first aid to cultural heritage damaged by man-made or natural disaster. Annually, the fund grants 11 Prince Claus Awards to individuals and organizations for their outstanding achievements in the field of culture and development.

Christa Meindersma, director of the Prince Claus Fund: “When Abdel Kader Haïdara informed us of the urgent need to evacuate the manuscripts from Timbuktu, we did not hesitate to act. But we realise the work is not yet done. After meeting with the families last November and listening to them discuss the need to digitalize the manuscripts, we are proud to partner with HMML and contribute not only to the immediate safety of these priceless manuscripts, but also to their future.”

“The Prince Claus Fund introduced us to Haïdara and made this work possible. We are grateful for their investment in this first year of a very exciting project,” Stewart said. The project is also supported by the Arcadia Fund of London, principal sponsor of HMML’s digital preservation efforts.

HMML is currently preserving manuscript collections at sites in Malta, Lebanon, Iraq, the Old City of Jerusalem, Turkey, India, Ethiopia and Mali. These resources, available through HMML’s online catalog, OLIVER, and image database, Vivarium, have become essential tools for global manuscript research. In 2014, HMML will launch vHMML, an online environment for manuscript studies across several cultures. HMML is also the home of The Saint John’s Bible.