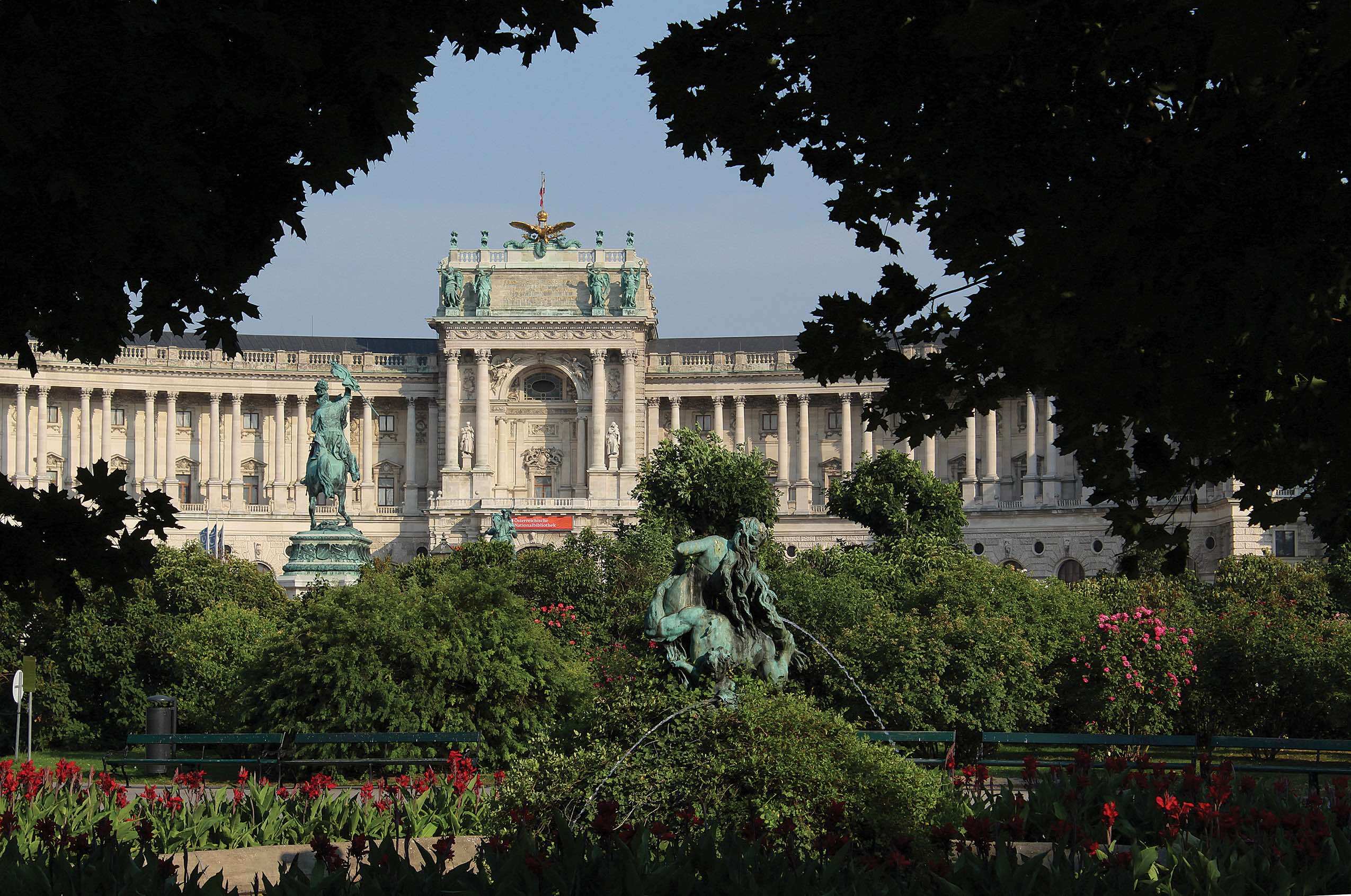 The Österreichische Nationalbibliothek (Austrian National Library) entrance at Heldenplatz, in Vienna, Austria. Founded by the Habsburgs in 1368 CE, the library was known as the Imperial Court Library until 1920 CE.

HMML’s first library partnerships were to photograph the collections of prominent libraries in Western Europe, some of which included significant numbers of manuscripts acquired from the Islamic world. Of these collections, by far the largest is the massive collection of the Österreichische Nationalbibliothek (Austrian National Library) in Vienna. In the early 1970s, more than 3,200 Arabic-script manuscripts in this library were microfilmed; these microfilms are now fully cataloged online in HMML Reading Room.

Included in the collection are more than 1,700 manuscripts in Arabic and more than 1,300 in Ottoman Turkish, as well as manuscripts in Chagatai, Azerbaijani, and other Turkic languages and dialects. There are more than 500 manuscripts in Persian, a few in Urdu, and one each in Bosnian, Albanian, and Kurdish. The vast majority of the texts are by Muslim authors, but there are also texts written and copied by Christians, Druze, Zoroastrians, and Bahá’ís. Even the term “Arabic script” does not capture the full diversity of the collection: two of the manuscripts are in medieval Turkic languages written in the old Uighur script of Central Asian origin.

The bulk of these manuscripts were acquired by the government of the Austrian Empire, especially during the height of its power in the nineteenth century. Manuscripts were obtained from great distances, including Iran, South Asia, and other regions with Islamic heritage.

Because the Austrian Empire was in constant contact—and frequent conflict—with their Ottoman neighbors, a great number of the manuscripts came from historic Ottoman territories in Southeast Europe, Anatolia, and the Middle East. When both empires collapsed in the wake of World War I, Austrian and other European scholars continued to buy manuscripts in the newly established Republic of Turkey. The collection is therefore an especially valuable resource for Ottoman Turkish, including many items that are rare to find outside of Turkey (or anywhere at all).

Literary, poetic, and historical texts are especially well represented in the collection, highlights of which range from the world’s oldest-known Islamic Persian manuscript—a medical text copied in 1056 CE (Cod. A.F. 340, HMML microfilm 22470)—to diplomatic correspondence exchanged across the border between the Austrian and Ottoman empires. 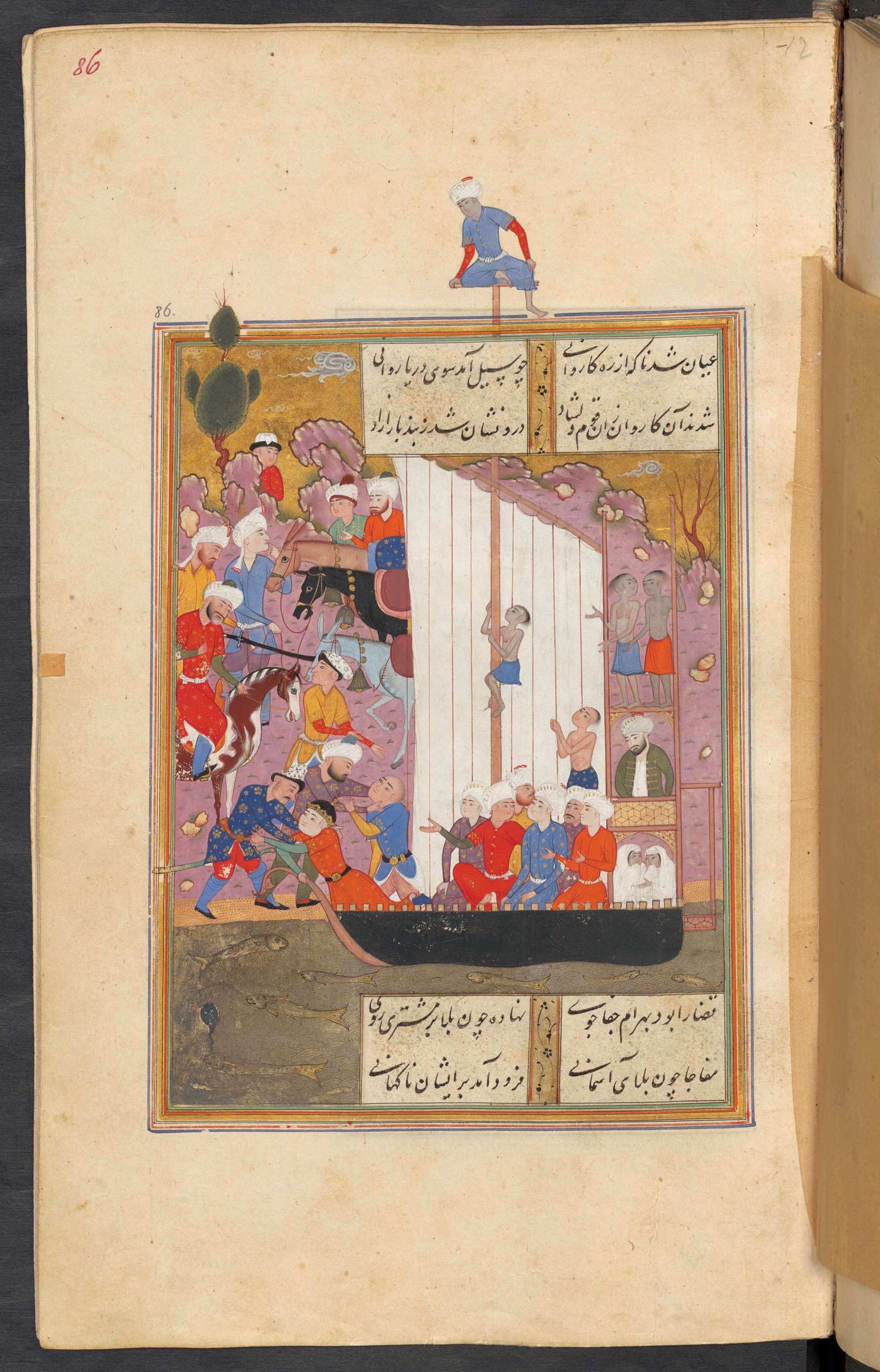 The romance of Mihr and Mushtarī is a fourteenth-century Persian narrative poem by ʿAṣṣār of Tabrīz. On this folio (86r), Mushtarī and his friends are captured and taken aboard a ship on the Caspian Sea. The manuscript was copied by a scribe named Hidāyat Allāh in sixteenth-century Iran and was purchased in Istanbul in 1677 CE by Peter Lambeck, keeper of the Imperial Court Library in Vienna. Image digitized by the Österreichische Nationalbibliothek (Cod. A.F. 68, HMML microfilm 22211).

The focus of the Nationalbibliothek collection distinguishes it from other Islamic collections that HMML has digitized in recent years. The collection was formed during a period when Western institutions and individuals were acquiring many valuable and historic manuscripts from the Islamic world, especially in the fields that were considered most interesting by Orientalist scholars. HMML’s work in places like Jerusalem or Timbuktu—photographing all items in a collection—digitally preserves the manuscripts that were left behind, which often testify to traditions and fields of knowledge that have been less prominent in Western scholarship. Naturally, there are also many areas of overlap, including shared texts that can now be more easily analyzed across continents using photographic copies.

Roughly 250 of the 3,229 Arabic-script manuscripts are part of the Eduard Glaser collection, acquired by the Nationalbibliothek in the 1890s and consisting primarily of manuscripts from the Zaydī Shīʻī community of Yemen. Microfilms of the Glaser collection were scanned as part of the Zaydī Manuscript Tradition project and are available for viewing online. The remainder of the Nationalbibliothek collection that HMML microfilmed can be viewed with microfilm readers on-site at HMML or scanned by request. 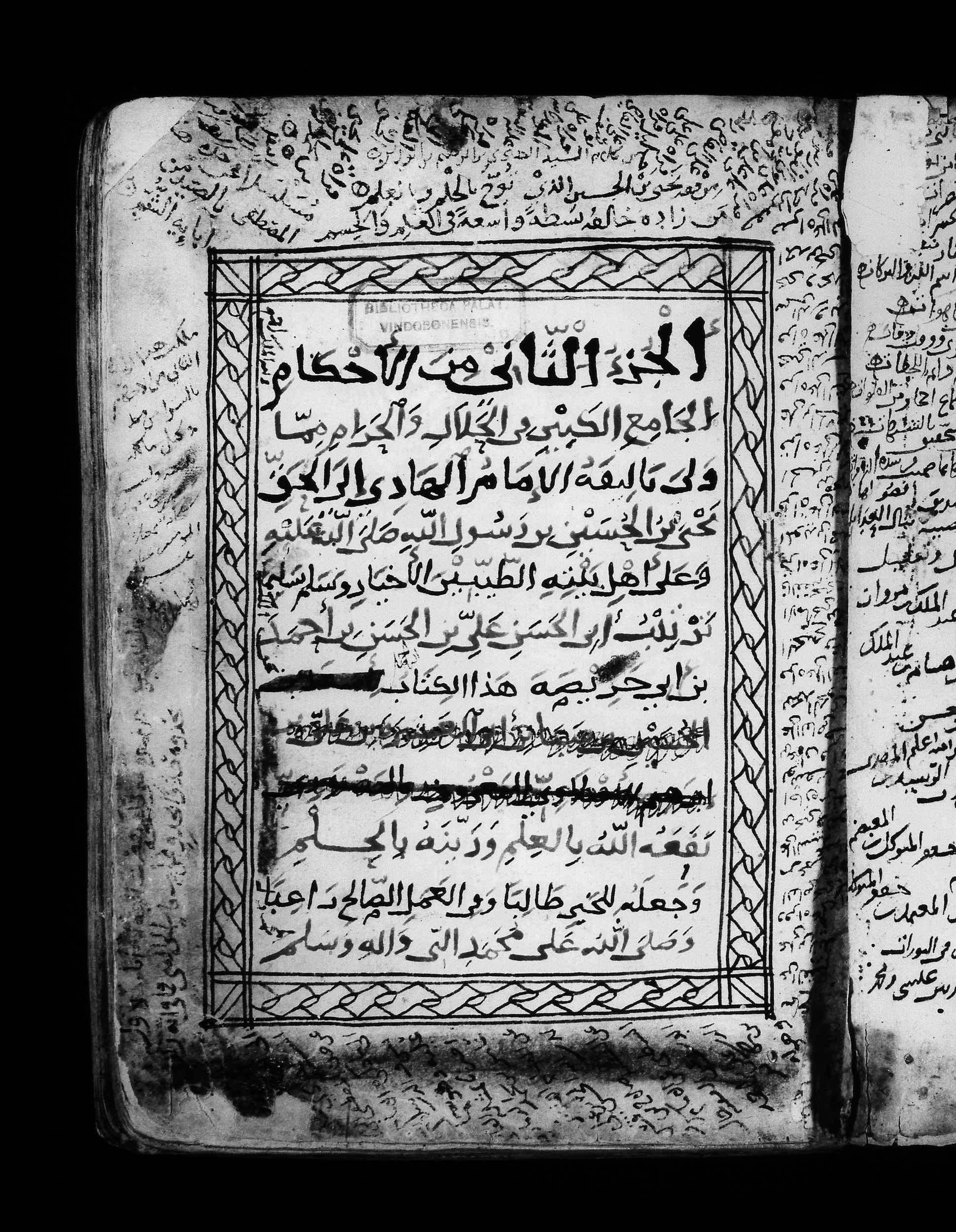 The title page (fol. 4r) of a book of hadith that are relevant to the law of the Zaydī community, originally compiled in the tenth century. Copied in Yemen in 1145 CE, it is the oldest dated manuscript in the Glaser collection of the Österreichische Nationalbibliothek. It was acquired in Yemen by Austrian Orientalist Eduard Glaser, then sold to the Imperial Court Library in Vienna in 1894 CE. HMML’s microfilm images of the book have been scanned, and each page can be viewed online in HMML Reading Room. (Cod. Gl. 108, HMML microfilm 25352)

Significantly, HMML Reading Room is now the most comprehensive catalog of the Nationalbibliothek’s Arabic-script collection in the world.

The Nationalbibliothek is still in the process of integrating information into their own online catalog, especially for items acquired since Gustav Flügel’s monumental catalog was published in the 1860s. HMML Reading Room contains detailed, updated descriptions of each Arabic-script manuscript in the collection. The authors and titles of the texts are also described in the open-access HMML Authority File database—useful as a resource for all researchers of these literary traditions.

This nearly two-year cataloging project is part of the Resources for the Description of Manuscripts from Understudied Christian and Islamic Traditions grant from the National Endowment for the Humanities. Over the past year, cataloging was completed for six other Austrian libraries microfilmed by HMML, representing 3,856 manuscripts written in Latin, German, French, Italian, Hebrew, and Czech. In April 2022, cataloging was completed for all the Islamic and Arabic-script microfilms in HMML’s collections. Descriptive catalog records are making these manuscripts discoverable online, for readers around the world.

This story originally appeared in the Summer 2022 issue of HMML Magazine.