This story is part of an ongoing series of editorials in which HMML curators and catalogers examine how specific themes appear across HMML’s digital collections. From the Islamic collection, Dr. Joshua Mugler shares this story about Banned Books.

Maḥmūd ibn ʻUmar al-Zamakhsharī did not have an easy childhood. He was born in 1075 CE into a poor family, the son of a local imam in the small town of Zamakhshar (now the abandoned site of Yzmykşir in northern Turkmenistan). At some point in his early years, one of al-Zamakhsharī’s legs had to be amputated, and he wore a prosthetic for the remainder of his life. His father hoped the young Maḥmūd might become a tailor, a trade that could be financially rewarding despite his disability. However, al-Zamakhsharī quickly showed promise and dedication as a student, and his father found an affordable educational opportunity for him in the larger city of Gurganj (now Köneürgenç, also in Turkmenistan). At the time, Gurganj was the most prominent city of Khwarazm, a thriving and powerful region located along the delta where the Amu Darya River (known in classical times as the Oxus) flowed into the Aral Sea. 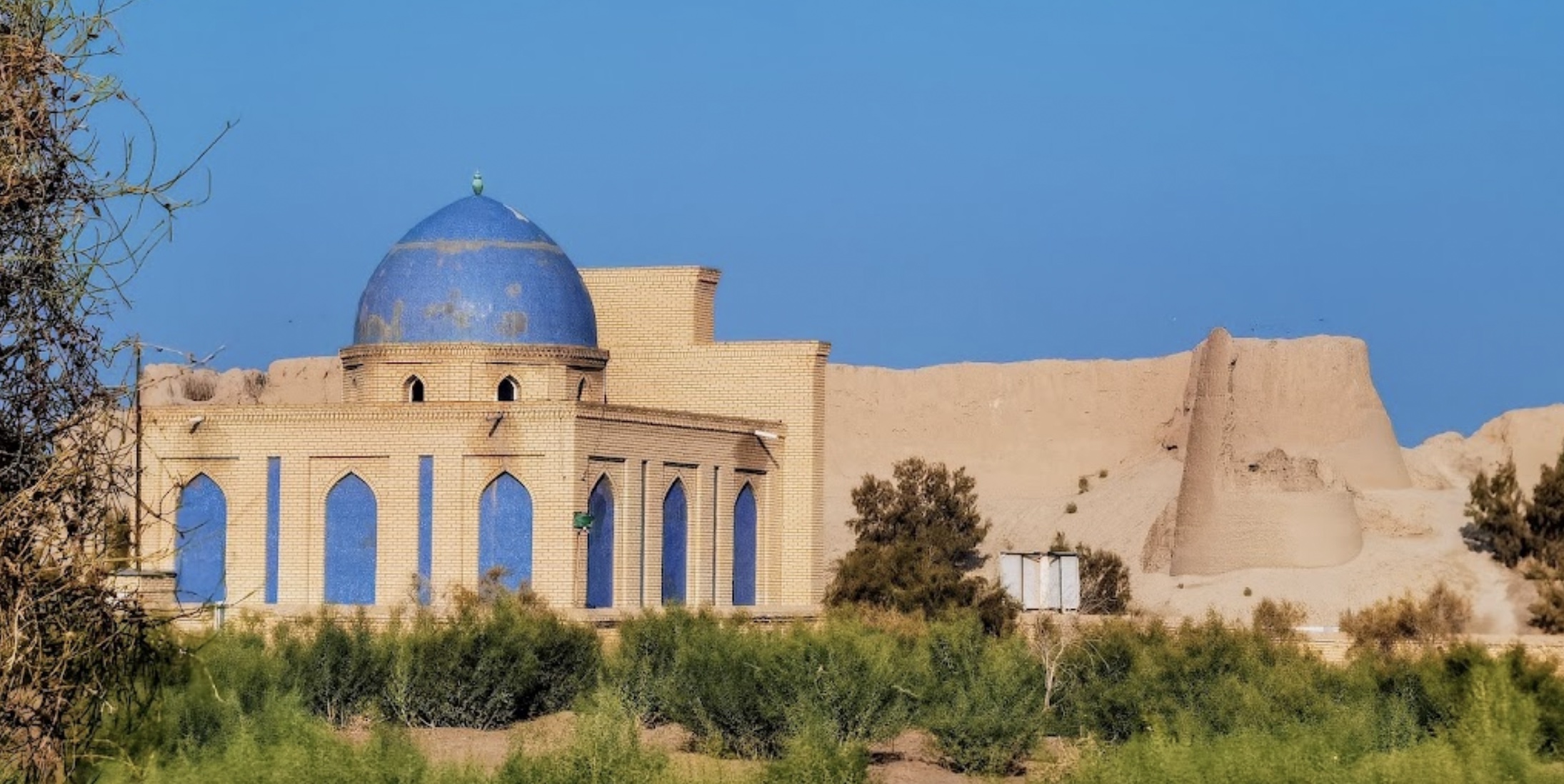 A shrine built in honor of al-Zamakhsharī stands across from the abandoned walls that mark the site of medieval Zamakhshar, now Yzmykşir, Turkmenistan. Photograph by Oleg Guchgeldiyev via Google Maps.

Al-Zamakhsharī succeeded wildly as a scholar and traveled throughout Central Asia, Iran, the Middle East, and the Arabian Peninsula in pursuit of knowledge. Although the people of Khwarazm mostly spoke Iranian and Turkic languages in daily life, al-Zamakhsharī wrote almost entirely in Arabic, the sacred language of Islamic revelation, which al-Zamakhsharī mastered as few had before or after him.

He wrote highly influential works in the fields of Arabic grammar (for example, al-Mufaṣṣal fī ṣanʻat al-iʻrāb) and lexicography (Asās al-balāghah), as well as literary and poetic collections that displayed his command of Arabic style (Maqāmāt and Rabīʻ al-abrār).

He struggled for many years to achieve wealth and success through his scholarship, but after a serious illness in 1118 CE, he devoted his later decades to a more pious and austere lifestyle. Al-Zamakhsharī died in Gurganj in 1144 CE. In recognition of his wide-ranging scholarly accomplishments, he has since been known as Fakhr Khwārazm (the Pride of Khwarazm); because he spent several years living in the holy city of Mecca, he is also called Jār Allāh (the Neighbor of God). 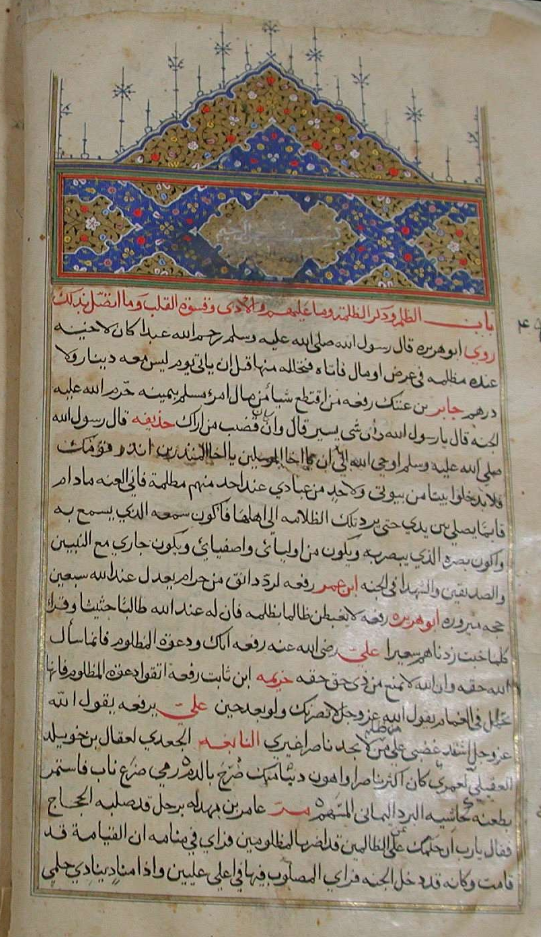 The most famous work of al-Zamakhsharī is his commentary on the Qurʼan, entitled al-Kashshāf (the Unveiler). Written in Mecca between 1132 and 1134 CE, al-Kashshāf is one of the most influential works of Qurʼan commentary (a genre known as tafsīr). Al-Zamakhsharī brings the full range of his scholarly expertise to bear in this work, which analyzes the sacred text’s grammatical features, metaphorical expressions, literary perfections, legal implications, and theological meanings. Later Muslim scholars continued to recognize the genius of al-Kashshāf, and many of the most important commentaries that followed drew heavily from al-Zamakhsharī’s work.

For many Islamic scholars since the 12th century, however, there has been one glaring problem with al-Zamakhsharī’s commentary: his adherence to the teachings of the Muʻtazilī school of theology. The Muʻtazilīs were dominant in elite circles in the early centuries of Islam, most notably at the Baghdad court of the ʻAbbāsid caliph al-Maʼmūn in the early 9th century. However, al-Maʼmūn’s harsh treatment of non-Muʻtazilī scholars lingered in the minds of many theologians.

By the time of al-Zamakhsharī, the Muʻtazilīs were a small minority. There were only a few regions where Muʻtazilī thought remained influential, but as it happened, one of these regions was al-Zamakhsharī’s homeland of Khwarazm, and he was proud of his adherence to his local school of thought even as he journeyed across the Islamic world. It followed that al-Kashshāf, his most significant theological work, includes the most extensive exposition of his Muʻtazilī beliefs.

Later scholars who respected al-Zamakhsharī’s knowledge of the Qurʼanic text found different ways to incorporate his thought into the majority tradition. Some Qurʼan commentators, such as ʻAbd Allāh al-Bayḍāwī (–1286 CE?), used al-Zamakhsharī extensively as a source and either ignored or argued against his Muʻtazilī claims, aiming to produce “orthodox” commentaries that avoided the problematic elements of al-Kashshāf. Other authors tackled al-Zamakhsharī more directly, such as Aḥmad ibn al-Munayyir (1223–1284 CE), whose commentary al-Intiṣāf min al-Kashshāf is devoted entirely to explaining the errors of al-Kashshāf. A few scholars found al-Zamakhsharī so suspicious that they tried to avoid using al-Kashshāf altogether.

Meanwhile, the Muʻtazilī school remained the dominant theological movement among the Zaydī community of northern Yemen. HMML’s collections of Zaydī manuscripts (ZMT) show little of the same hesitation, avoidance, or rejection found among other Islamic sects, and copies of al-Zamakhsharī’s works are plentiful.

In 2021, HMML received a large book donation that included a two-volume copy of al-Kashshāf, printed in Cairo in 1890 CE. This edition, which is now digitized (HMML 00600 and HMML 00601), includes Ibn al-Munayyir’s al-Intiṣāf printed in the margins. In this way, the book struck a balance: al-Zamakhsharī’s doctrines are presented in full, and the refutations of Ibn al-Munayyir offer a “corrected” view, seen as an acceptable way for readers to receive the full picture.

Muslims since the 12th century have recognized the genius of al-Zamakhsharī’s work and have found a variety of strategies to incorporate his teaching into their tradition in an edited form, without censoring the text of al-Kashshāf altogether. By using the orthodox portions of his text, copying his text along with a refutation, or any number of other approaches, they have transmitted this unorthodox text in ways that the majority could accept, and even a scholar with whom most Muslims have strong doctrinal disagreements has remained highly influential to the present day. 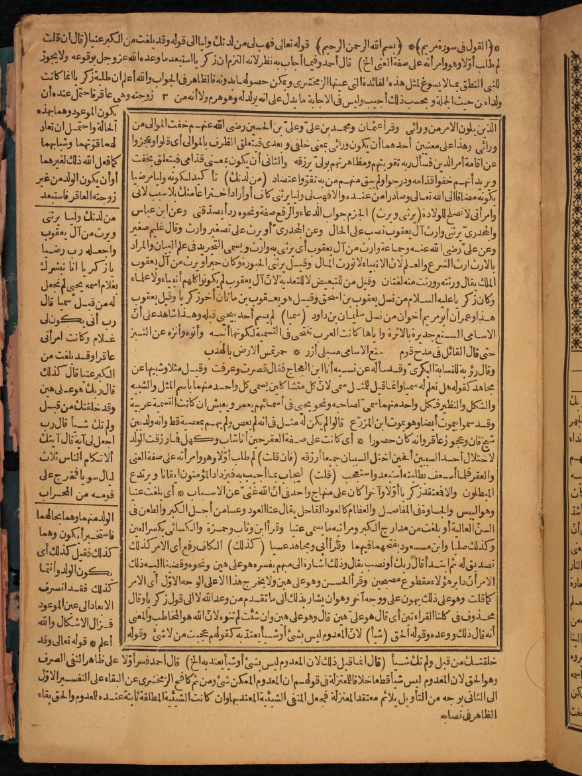 HMML’s copy of the 1890 Cairo edition of al-Kashshāf with the alternative view of al-Intiṣāf printed in the margins. (HMML 00601)
ABOUT THE AUTHOR: Dr. Joshua Mugler is curator of Eastern Christian and Islamic manuscripts at HMML.
Story Tags:
All StoriesCollectionsEditorialsSeries – Banned Books
Share:
Previous Story
Next Story