This story is part of an ongoing series of editorials in which HMML curators and catalogers examine how specific themes appear across HMML’s digital collections. From the Saint John’s University Rare Books collection, Dr. Matthew Z. Heintzelman shares this story about Banned Books.

The advent of the Protestant Reformation in the 16th century led to ambivalent responses to authors or books that might be eyed with suspicion by readers, especially government or church authorities. Owners of books sometimes took special measures to have access to books that would otherwise have been banned or unavailable to them.

In the following, I will consider two books containing five titles—each book censored or redacted as a way to preserve access. The practice of redacting or blanking out offensive material has been around for a very long time. While we generally think of redacting a text, in the case of trying to keep a book around, it is often the names of the authors or editors themselves that are obscured.

Terence And His Editors

Throughout the Middle Ages, Christian students seeking to improve their Latin had revered the plays of the Roman playwright Terence (2nd century BCE) as examples of proper Latin usage. Acknowledgement of Terence’s pedagogical value continued well into the modern era through the use (and performance) of his plays in schools and academies. With the first printed editions also came the need to improve and correct the texts received from centuries of manuscript transmission.

Two of the most famous Terence scholars in the early 16th century were the humanists Desiderius Erasmus (died 1536) and Philipp Melanchthon (1497–1560). However, with the religious and political upheaval that followed the start of the Protestant Reformation in 1517, these two scholars were no longer acceptable to Catholic authorities—Erasmus as a severe critic of corruption in the Catholic Church and Melanchthon as one of Martin Luther’s closest disciples.

Primarily interested in the pedagogical use of Terence, Johann Rivius (1500–1553) prepared an edition of Terence’s plays using corrections made by Erasmus and Melanchthon. To this, he added his own “castigations” or improvements on Terence’s work. Rivius was a humanist, theologian, and school reformer, who eventually became alienated from Catholic authorities.

In the collection of Saint John’s University in Collegeville, Minnesota, there’s a book containing Rivius’ 1536 edition of Terence’s plays, bound together with the 1534 edition of Rivius’ Castigationes. On both title pages, the editor’s name and the names of his sources are heavily inked out. On the second title page, the ink has burned through the paper, leaving a hole where the editor’s name once appeared. 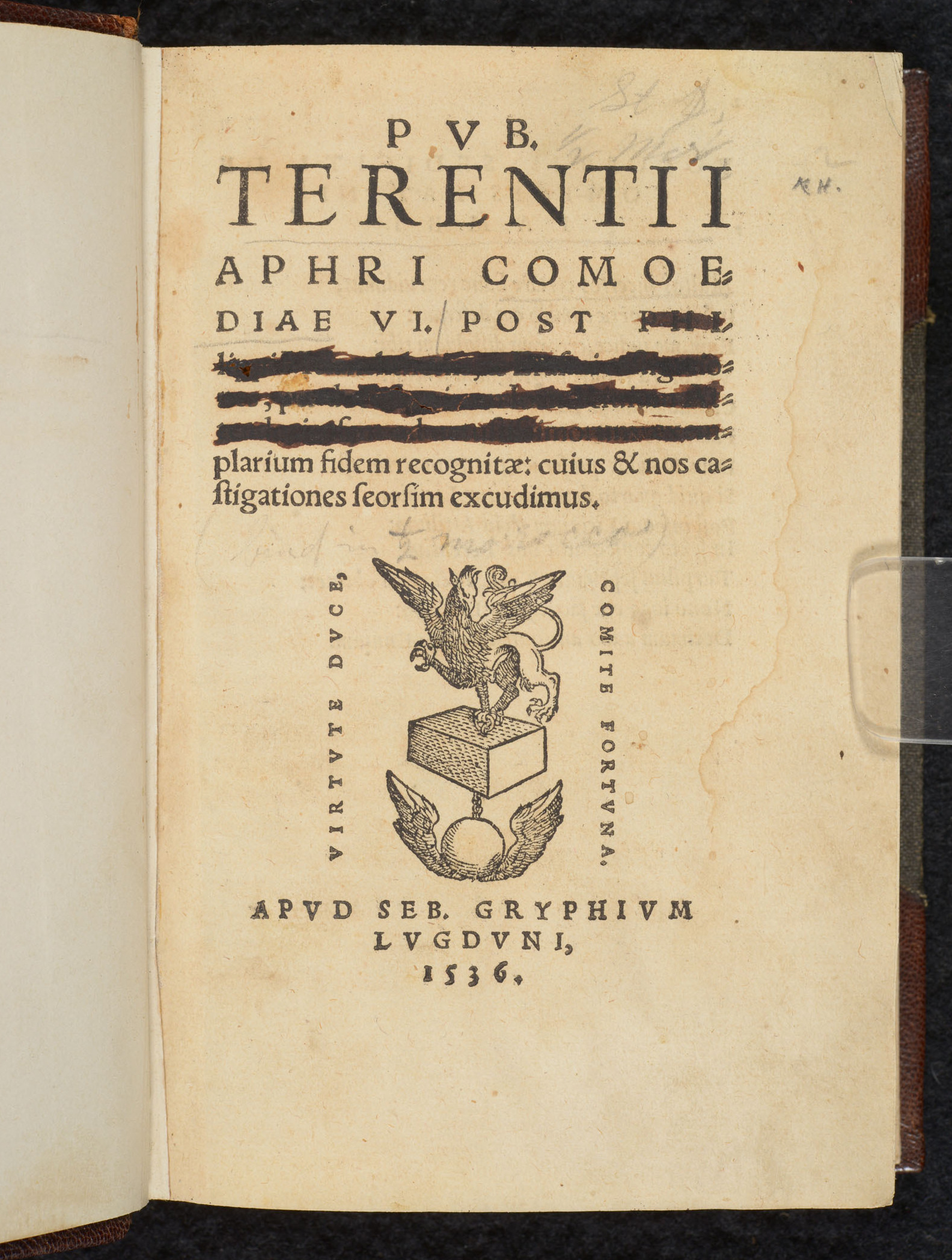 This book contains two works: the collected plays of the Roman playwright Terence (Pvb. Terentii Aphri Comoediae VI.), and a commentary on these plays by Johann Rivius (Castigationes plurimorum ex Terentio locorum). Printed in Lyon, France, by Sebastian Gryphius in 1536 and 1534, respectively. (SJRB 00627) 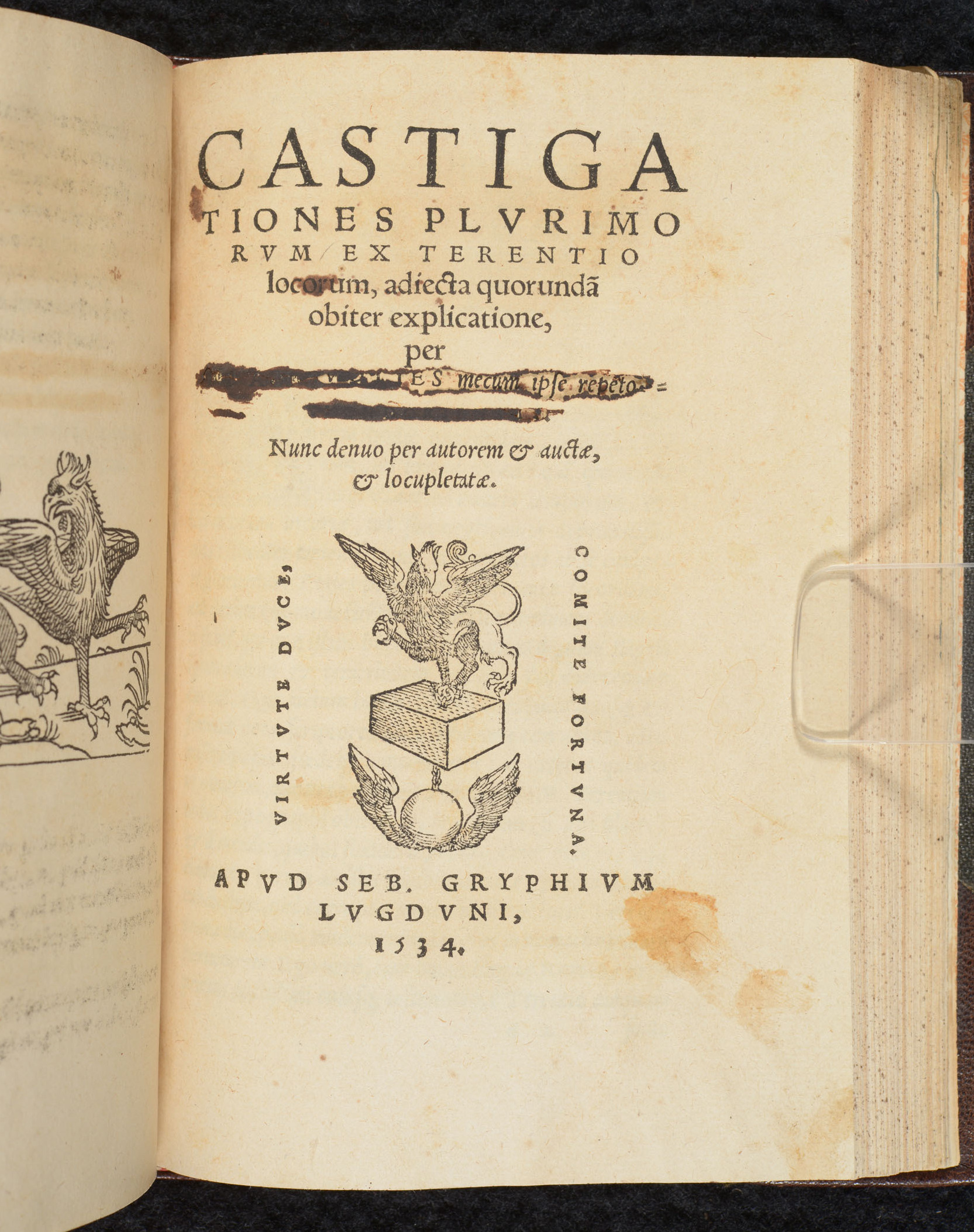 The redaction of names continues elsewhere in the volume. An introductory letter by Melanchthon has been left intact, but the acknowledgement of him as the author is again obscured by ink. 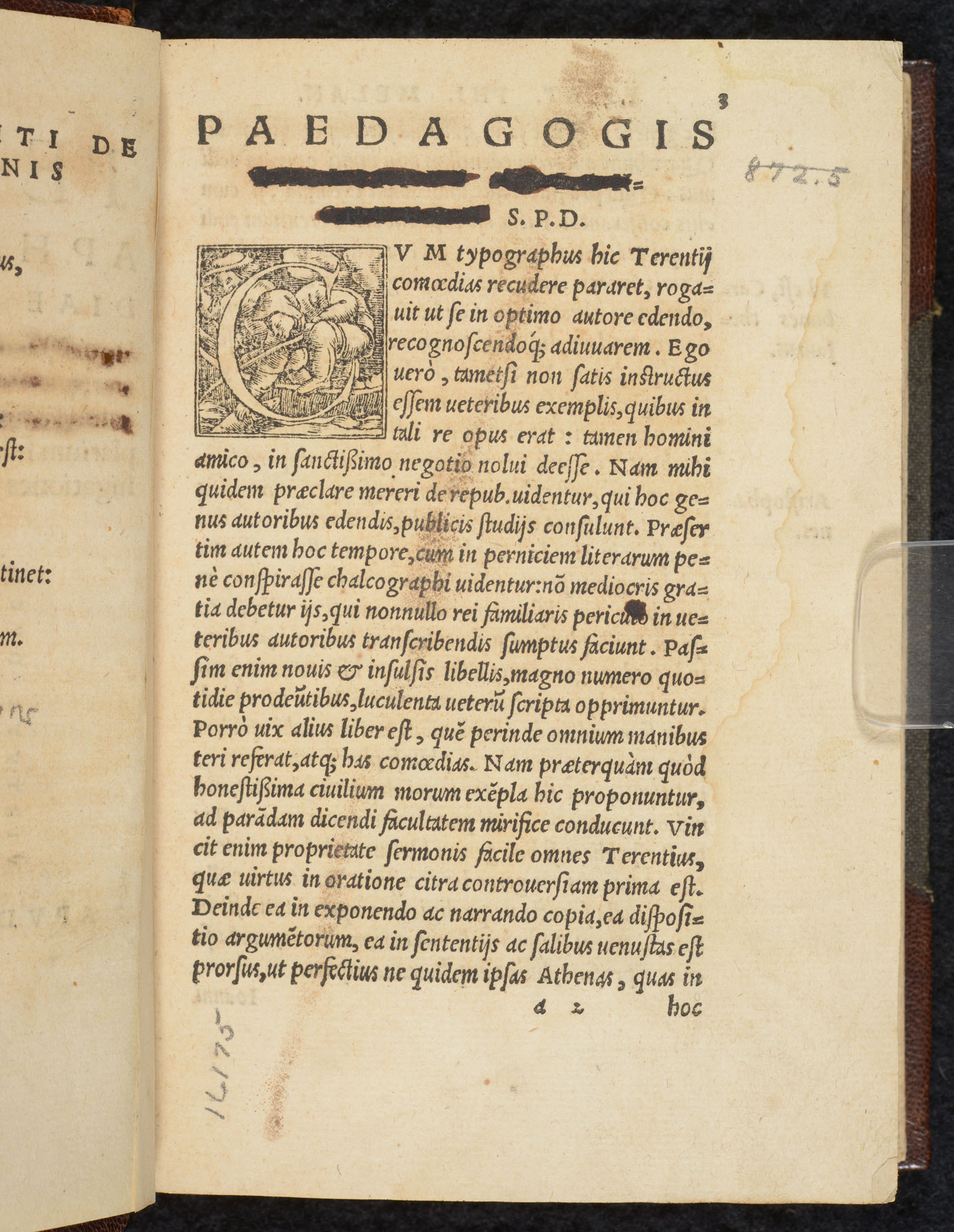 The name of Philipp Melanchthon, obscured by ink. (SJRB 00627)

A letter to Jean Grolier (1479–1565) recommending Terence’s plays—attributed to Francesco Asolano (or Torresano, 16th century), but actually written by Andrea Navagero (1483–1529)—follows Melanchthon’s letter. Again, the names are obscured, with the ink burning another hole in the paper (figure 4). Grolier was a friend and correspondent of that “dangerous” humanist, Desiderius Erasmus. 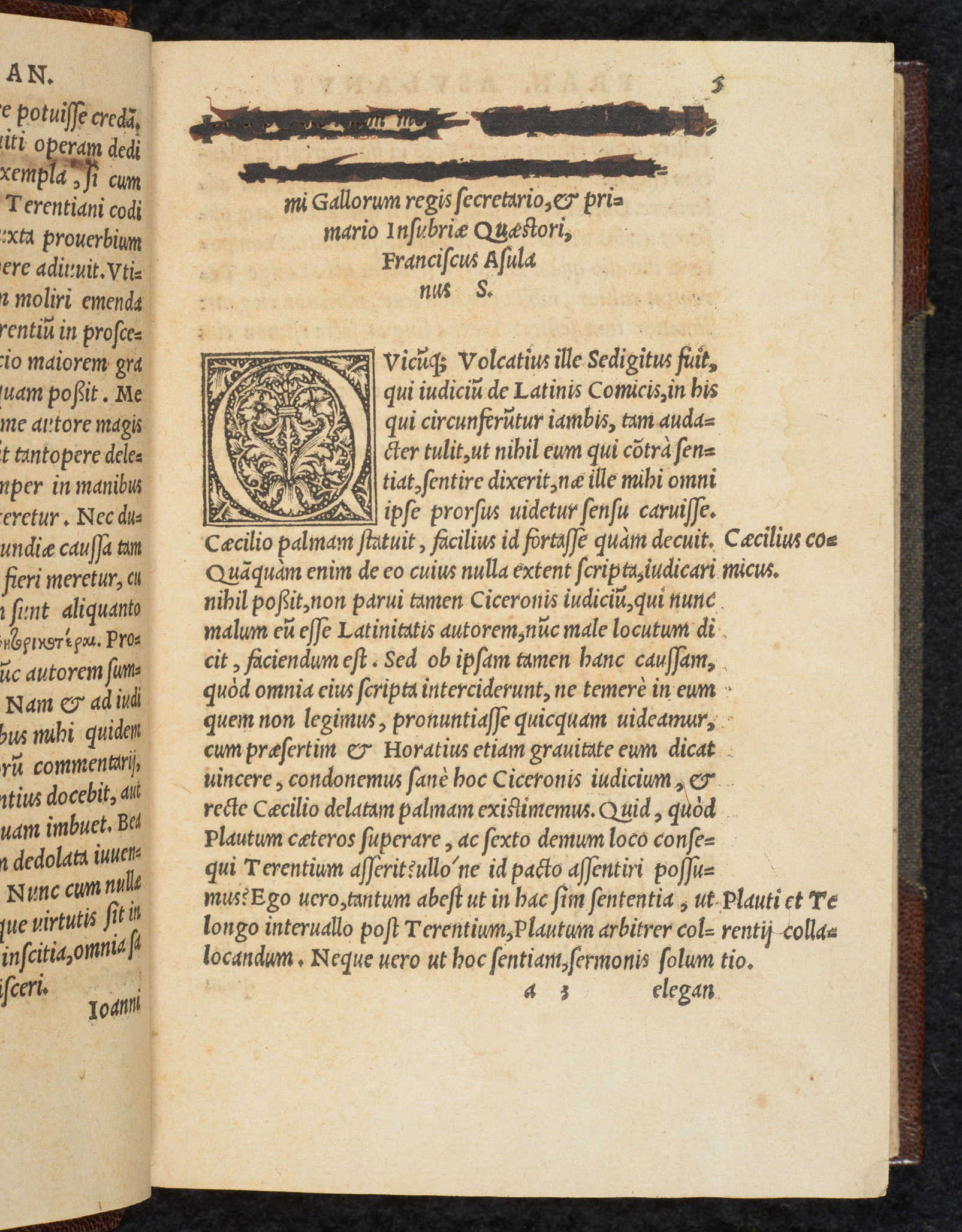 In one more example, Rivius dedicates his Castigationes to Julius Pflug (1499–1564), a humanist and Catholic bishop, who—like Erasmus—sought reform while remaining in the Church. Again, the redaction of the names is so thorough that this page and the adjoining ones are gradually deteriorating from the acid. 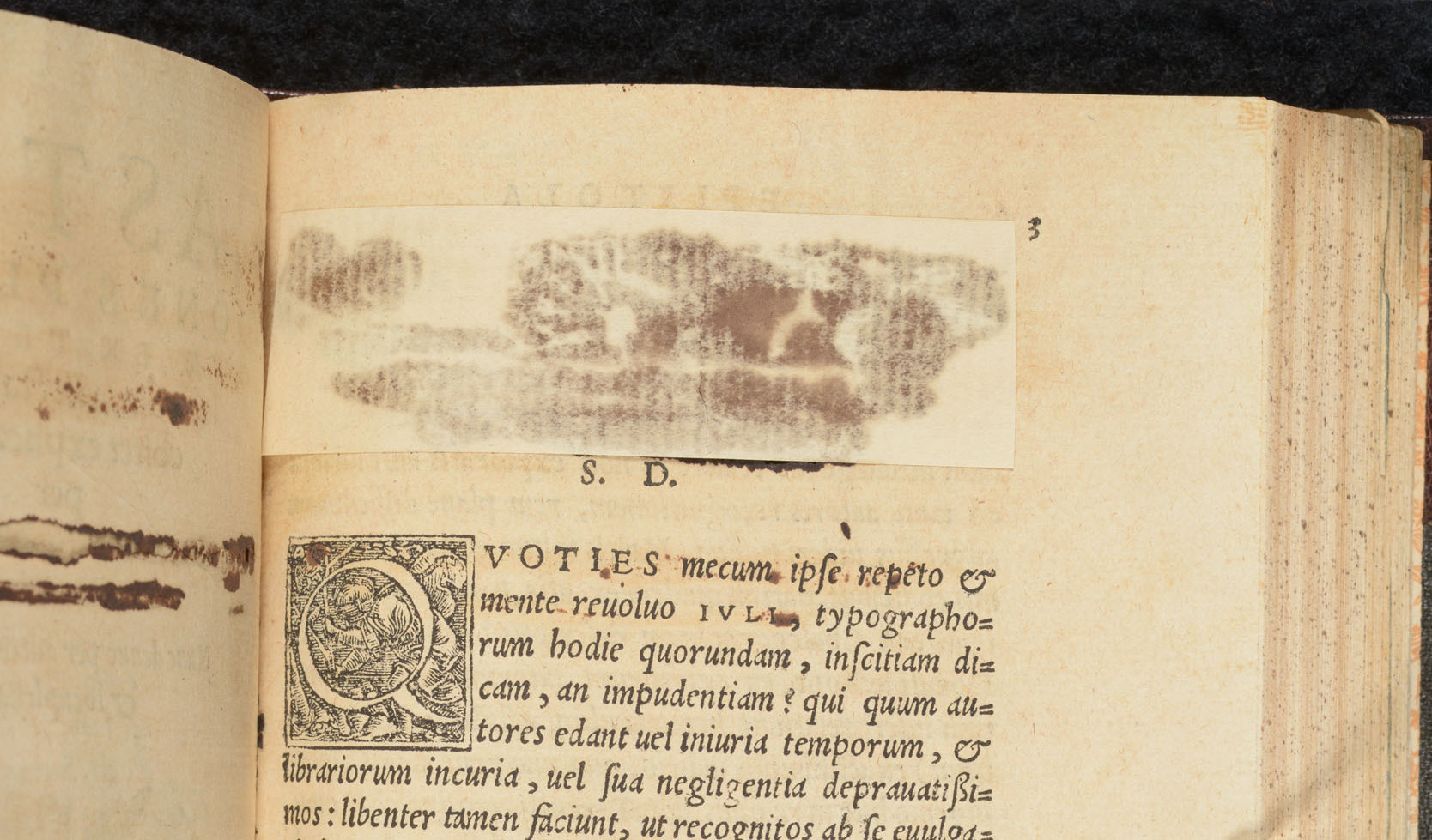 Annotations and marks on the Terence plays indicate that the volume may have been used for school performances. Curiously, this heavily-redacted book shows no signs of redaction in either Terence’s texts or in the Castigationes themselves. The content was acceptable, just not the people responsible for it.

Philipp Melanchthon appears (and disappears) in another interesting example: a small volume wrapped in blind-stamped pigskin with metal clasps. The binding bears the date of 1550 on the front. 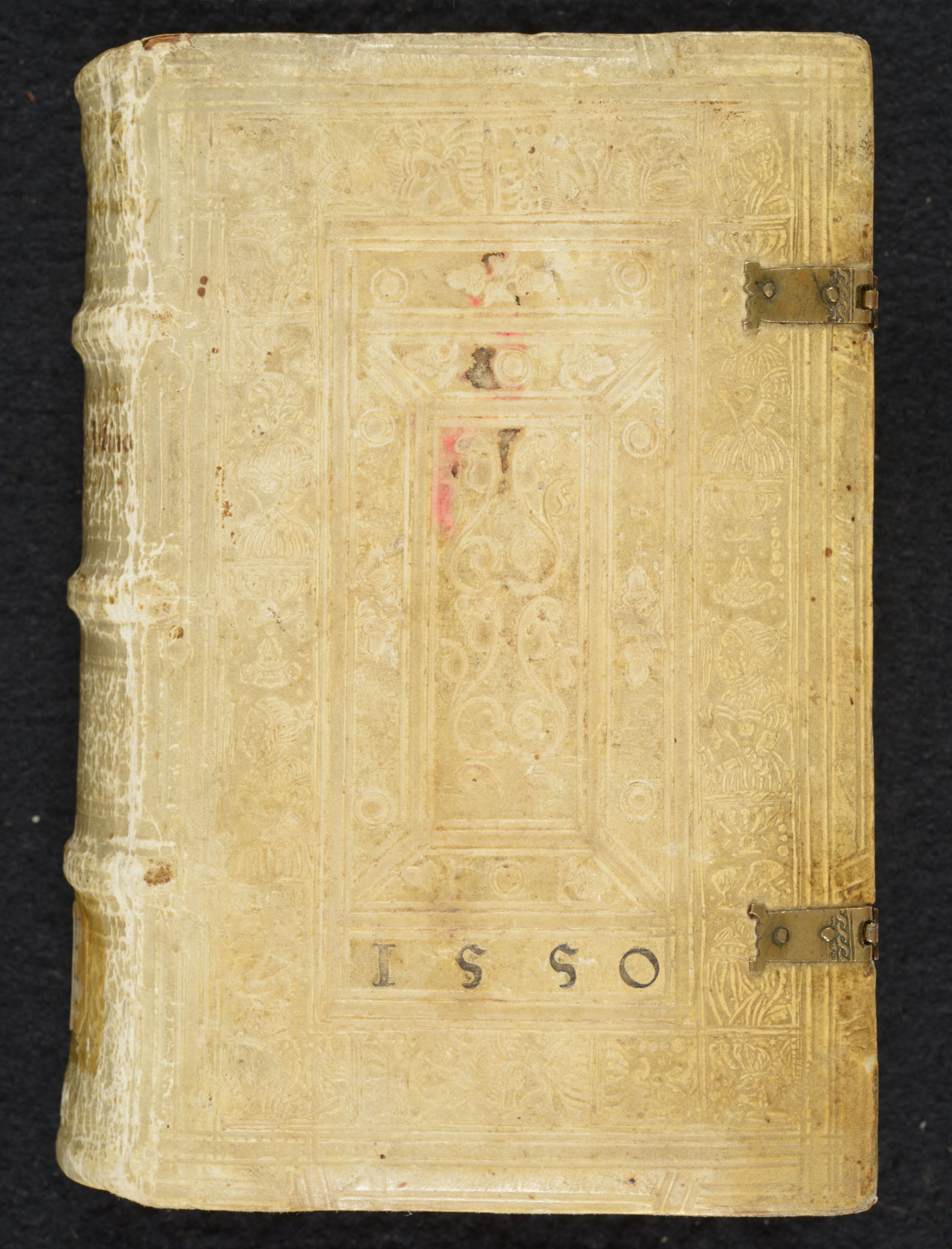 This volume is one of about 1,100 books that came to Saint John’s Abbey (Minnesota) in 1877 as a gift from the Benedictine Abbey of Ottobeuren (Germany). A note on the first of three title pages indicates that it had entered the monastic collection at Ottobeuren in 1599. The three books in this one volume are, in order:

As we saw with the 1536 copy of Terence, redaction of names appears to be a device for making a questionable book acceptable in a Catholic environment. Before opening this particular volume, however, consider its overall physical aspects. If we turn the closed volume around, we can see that the edges of the pages have strikingly different colors. These can help the reader find the later titles more quickly, as the color break occurs at the break between the first two works.

Turning the volume around again, we find that there are titles on the spine, used for identifying the contents on a shelf. However, only two of the titles are represented. These are (roughly transcribed): Loci communes [rerum] theologicarum [quae] [ho]die in controversia agitantur. Jo. Hofmaister and Encomium Aquilae [ ] Guilelmo Vlino, Premonstrat[…]. The middle title—by Philipp Melanchthon—is missing! 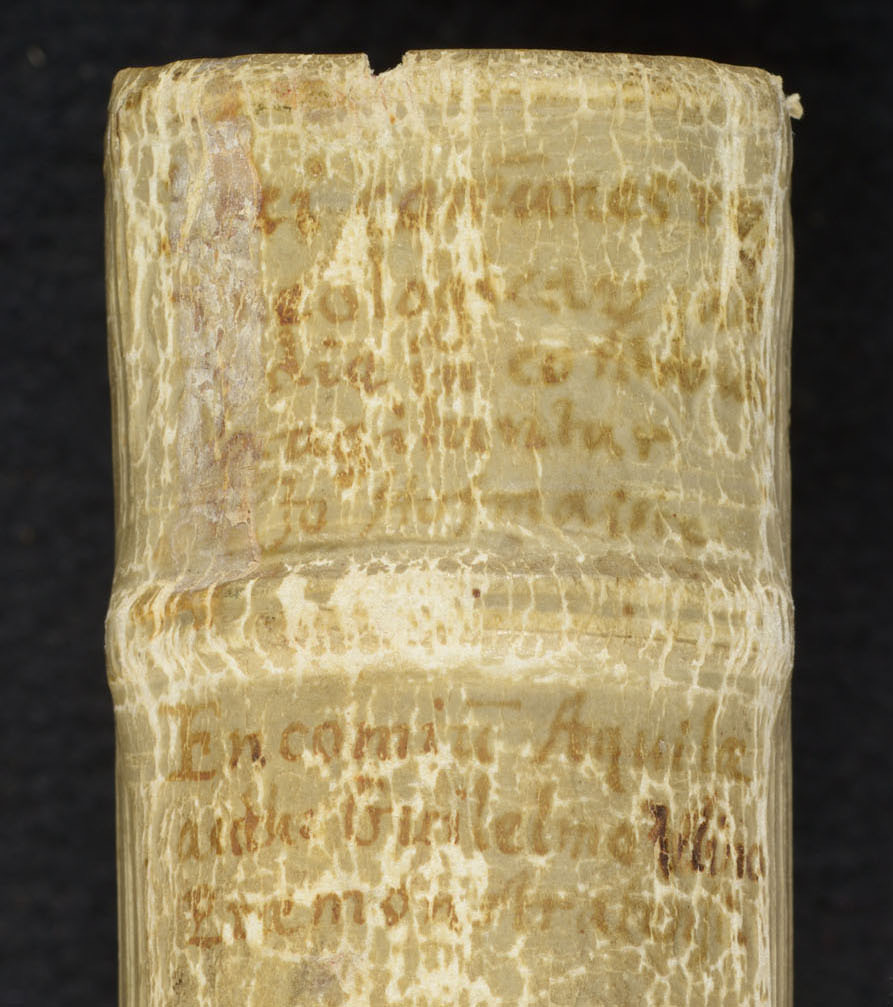 The label on the spine includes only the Loci communes and the Encomium aquilae; Melanchthon’s book is absent. (SJRB 00628)

Most likely, the three books were gathered by their original owner and bound together to reflect personal tastes and interests. As such, they are a rather eclectic bunch. The first title, the Loci communes (Common places) by an Augustinian, Johann Hoffmeister (died 1547), is a collection of quotations from Patristic writings intended to refute Protestant teachings. In a way, it represents a Catholic response to Philipp Melanchthon’s own popular collection with the same title (first published in 1521). Hoffmeister’s text went through numerous editions in the late 1540s. 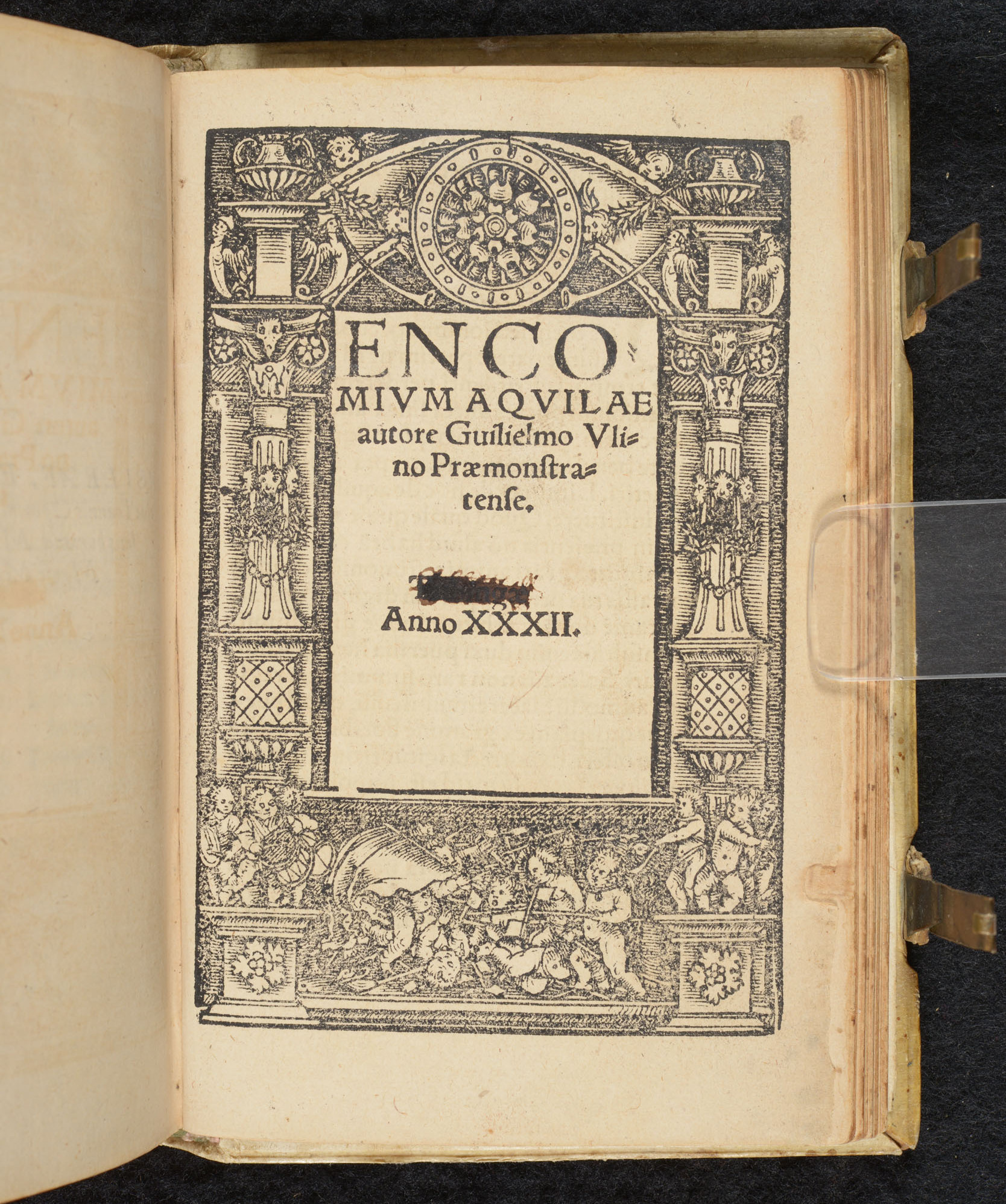 The last work of the three, the Encomium aquilae, was apparently only published once, in the university town of Tübingen, Germany, in 1532. Little is known of the author, Wilhelm Ülin, except that he was a member of the Premonstratensian community in Adelberg, Germany, who taught briefly at Tübingen and then later taught Hebrew at the university in Ingolstadt. The book itself is a devotional work. The name of the place of publication has been redacted, probably because control of Tübingen had shifted from Catholic to Lutheran leadership. Sandwiched between these two seemingly harmless (to Catholic authorities) titles is a book whose title page is again altered to censor information. 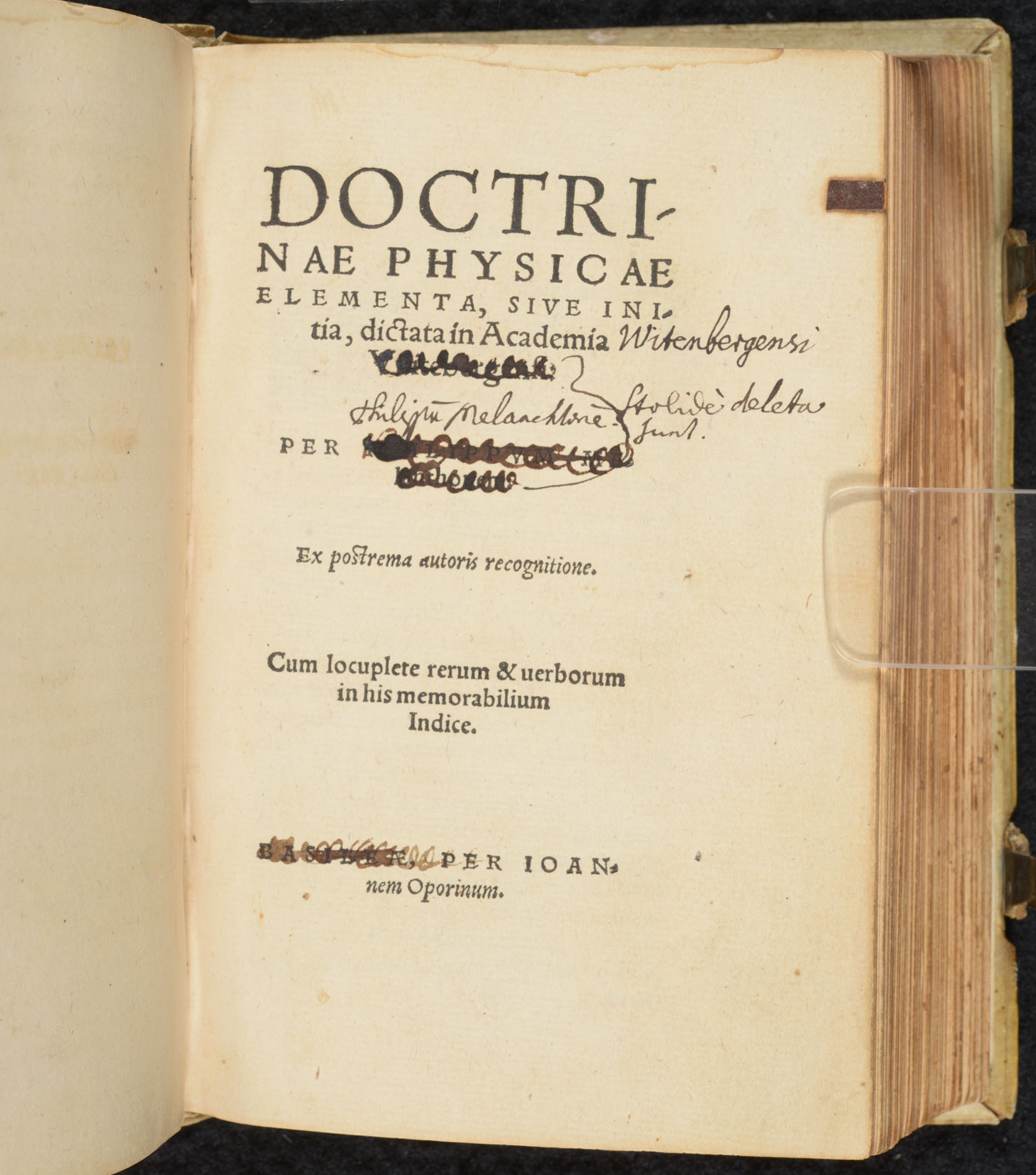 The title—Doctrinae physicae elementa—remains unobscured; however, the name of the author and his institution are inked out, along with the place of publication. A later hand has apparently restored the author and his place: “Witenbergensi” for the place and “[per] Philipum Melanchtonem” as the author. Alongside is the corrector’s comment: “stolide deleta sunt” (“stupidly deleted”?).

Melanchthon’s lectures on Aristotle’s De physica were first gathered and published in Wittenberg, Germany, in 1549. They found an enthusiastic response, so they were reprinted in at least four places in 1550: Wittenberg, Basel, Frankfurt am Main, and Lyon. These editions were followed by several more in the 1550s and 1560s. The redaction of the place of publication—Basileae or Basel, Switzerland—again demonstrates a desire to hide a name that would have been identified with the Protestant Reformation in the mid-16th century.

Add to this the sandwiching of the Melanchthon text between two “Catholic” works and the omission of the Melanchthon title from the spine labelling, and it seems quite likely that the original owner lived in a region controlled by Catholic leaders and wanted to hide their interest in Luther’s closest disciple and eventual successor (Melanchthon was leader of Luther’s reforms after 1546).

Even more intriguing is that of the three works in this little volume, only one has extensive marginal annotations that indicate that it was read closely. Which work appears to have been most interesting to that early reader (who was possibly the first owner)? That would be the “dangerous” one—Melanchthon’s Doctrinae physicae elementa. 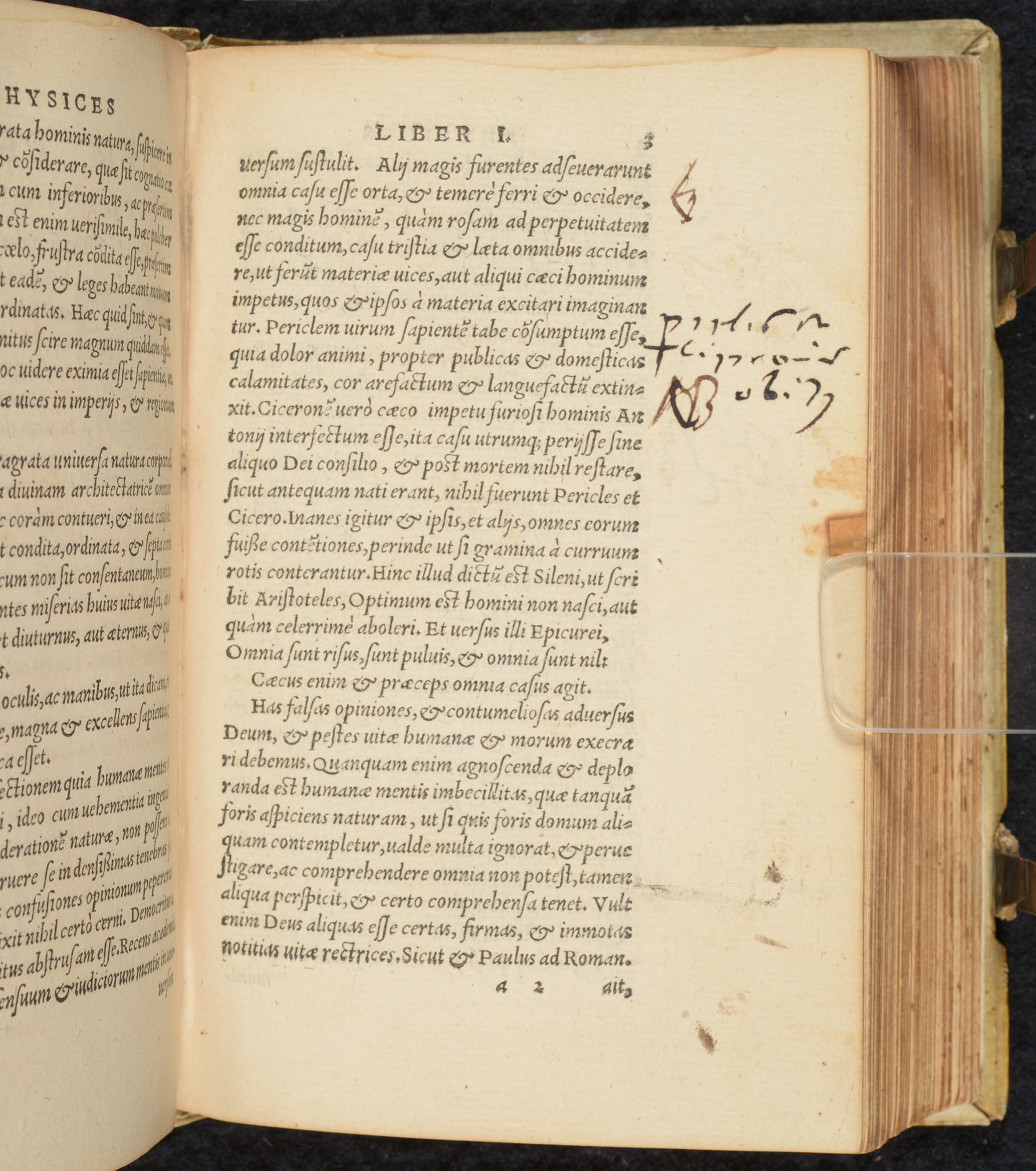