Books that Survived the Ban — Syriac Manuscripts in India

August 18, 2022
Books that Survived the Ban — Syriac Manuscripts in India

This story is part of an ongoing series of editorials in which HMML curators and catalogers examine how specific themes appear across HMML’s digital collections. From the Eastern Christian collection, Dr. James Walters shares this story about Banned Books.

Christianity has a long, rich history in India. Some even trace the origins of Christian communities in India to the apostle Thomas, based on a story of Thomas’s travels that is preserved in the Acts of Thomas.

Regardless of the point of origin, it is clear that communities of Christians thrived in India throughout late antiquity and the medieval era (400–1500 CE). Indeed, Indian Christians were among the first to interact with Portuguese explorers when, led by Vasco de Gama, they arrived on the shores of India in the late 15th century.

Once Portuguese merchants had established their new trading route to India, Portuguese Catholic missionaries soon followed. Despite the vibrant history of Christian traditions in India, which had primarily been shaped by the influence of the Assyrian Church of the East, the Portuguese were successful in shifting the ecclesiastical allegiance of many Christians, particularly in the city of Kochi, located on the coast of Kerala. As the Roman Catholic influence grew stronger in the region, Portuguese missionaries began pushing for more reforms among the practices of their new converts.

In 1599 CE, a synod was convened at Diamper (a town near Kochi, today known as Udayamperoor) in order to codify various reforms deemed necessary by the Portuguese missionaries. Many of the reforms were liturgical in nature, intending to bring the language and practice of the Indian Catholic churches more in line with that of the Roman Catholic tradition.

In addition to liturgical reforms, the Synod of Diamper produced a list of books that should be banned from further use, requiring that all existing copies of the works be either modified or destroyed.

Primarily, these banned books were associated with practices or teachers from the Church of the East that were deemed heretical by some Catholic leaders. “Decree XIV” from the official Acts and Decrees of the Synod of Diamper establishes the premise:

“The purity of the faith being preserved by nothing more than by books of sound and holy Doctrine; and on the contrary, there being nothing whereby the minds of people are more corrupted, than by books of suspicious and heretical doctrines; Errors being by their means easily insinuated into the hearts of the ignorant, that read or hear them: Wherefore the synod knowing that this Bishopric is full of books written in the Syriac tongue by Nestorian heretics, and persons of other devilish sects, which abound with heresies, blasphemies, and false doctrines, doth command in virtue of obedience, and upon pain of excommunication to be ipso facto incurred, that no person, of what quality and condition soever, shall from henceforward presume to keep, translate, read or hear read to others, any of the following books…”

(Printed in Geddes, The History of the Church of Malabar, page 154. Spelling and capitalization have been standardized from the original.) 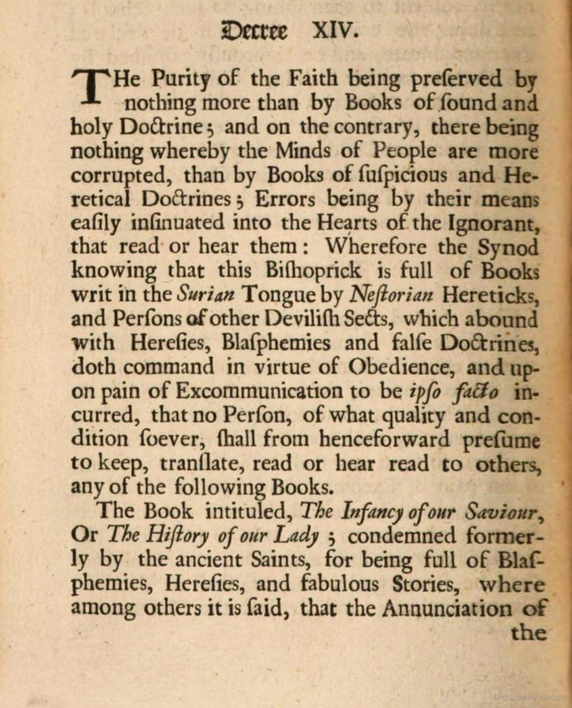 “Decree XIV” from The Acts and Decrees of the Synod of Diamper. Printed in Geddes, The History of the Church of Malabar, page 154. (Public Domain)

A list of banned books follows this introduction, usually with a brief explanation for why the book is objectionable. For example, the first entry on the list, a text identified as The Infancy of our Savior (which is probably a text known as the Infancy Gospel of Thomas) is banned “for being full of blasphemies, heresies, and fabulous stories,” such as indicating that Joseph, the earthly father of Jesus, “often reproved the child Jesus for his haughty tricks” (History, page 155).

The list includes many titles, some of which are difficult to correlate to known texts. One banned book is listed as a “Book of Synods.” This text is almost certainly the Nomocanon (Qānone súnhādíqāye) created by ʻAbdīshōʻ bar Brīkā, a 14th-century bishop in the Church of the East. The Acts of the Synod list several reasons for banning this book, such as claims that “the Church of Rome ought to be subject to that of Babylon,” and “that the Roman Church is fallen from the faith” (History, page 159).

How successful was the Synod of Diamper at eradicating such works? It is impossible to know how many books were destroyed in the aftermath of the synod, but it is interesting to note that some books appear to have survived the purge.

Recently, catalogers at HMML have been cataloging manuscripts located in Christian collections in India, all of which are written either in Syriac, Malayalam, or Malayalam Garshuni (Malaylam language written in a special script adapted from the Eastern Syriac script). Amazingly, three manuscripts—each in collections of India’s Syro-Malabar Catholic Church—contain the banned Nomocanon of ʻAbdīshōʻ.

One of these manuscripts, APSTCH THRI 00064, is an important witness to the text because it is dated to 1291 CE, which is within the lifetime of the author, who died in 1318 CE. This manuscript was copied in the Middle East and subsequently brought to India. It is not known when it was brought—that is, before or after the Synod of Diamper—but in either case it is remarkable that this manuscript was allowed to survive. It is possible that this manuscript survived because the author’s name was erased from the beginning of the work, making it more difficult for readers to identify the “heretical” content. 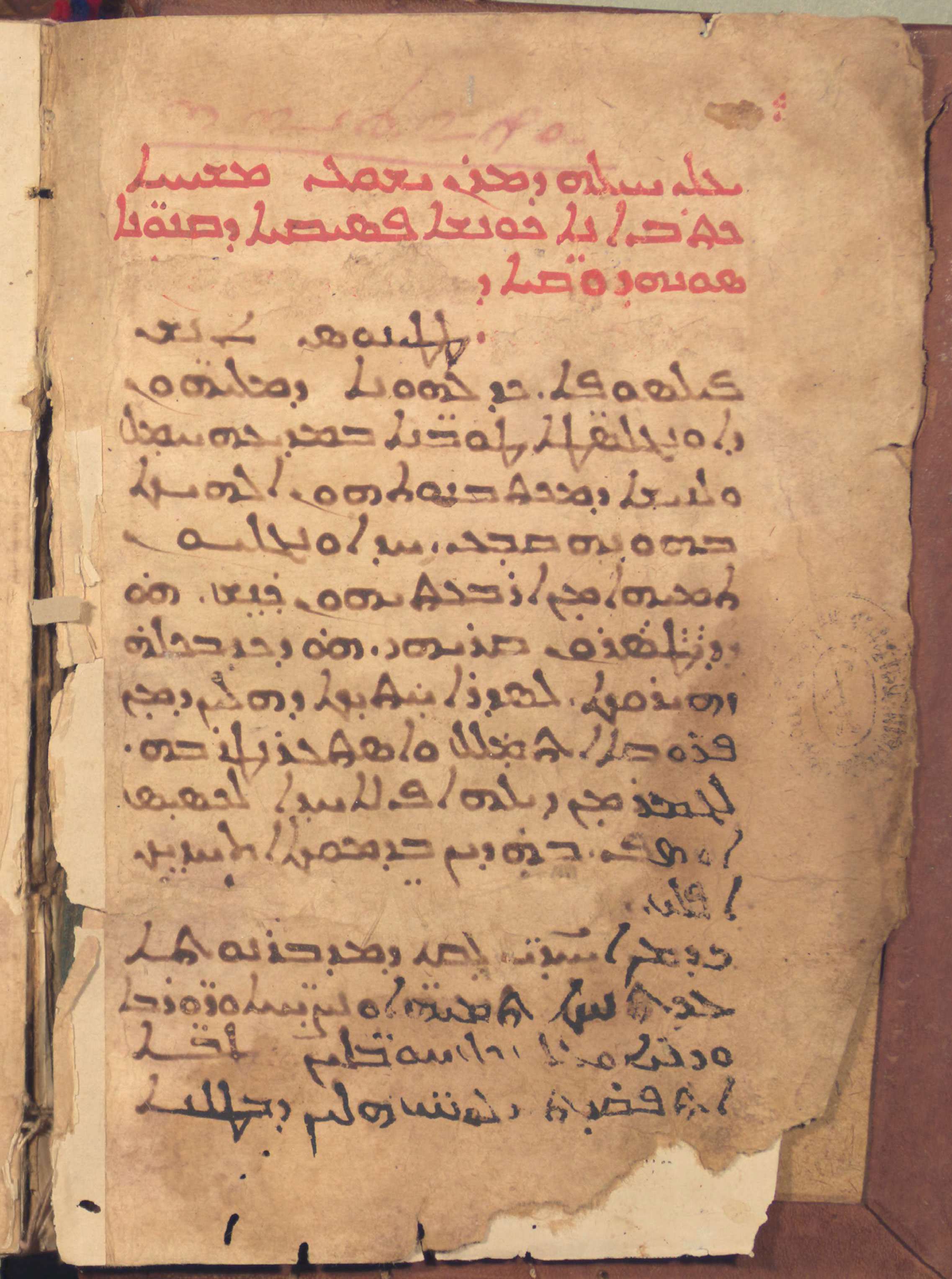 The first page of APSTCH THRI 00064, containing the Nomocanon of ʻAbdīshōʻ bar Brīkā. The blank area in the third line of red text is where the author’s name was erased. (APSTCH THRI 00064)

A third witness to the Nomocanon in India is APSTCH EMAP 01 00010, which was copied in 1563 CE for Abraham of Angamaly, a bishop of the Church of the East who traveled to India from the Middle East, but who later converted to the Chaldean Catholic Church (a group that formally split from the Church of the East and joined in full communion with Rome).

This manuscript is perhaps the most interesting of all three. It was copied before the Synod of Diamper during a very tense period of contested control between Portuguese and Chaldean missionaries over the Indian churches around Kochi. The title page contains the name of the Nomocanon’s author (ʻAbdīshōʻ bar Brīkā) and, impressively, a note written by Bishop Abraham himself. In the note, Abraham condemns Nestorius, a controversial bishop of Constantinople, thereby distancing the text from accusations of heresy. It is likely because of this note that this manuscript was allowed to survive following Abraham’s death (1597 CE) and the Synod of Diamper (1599 CE). 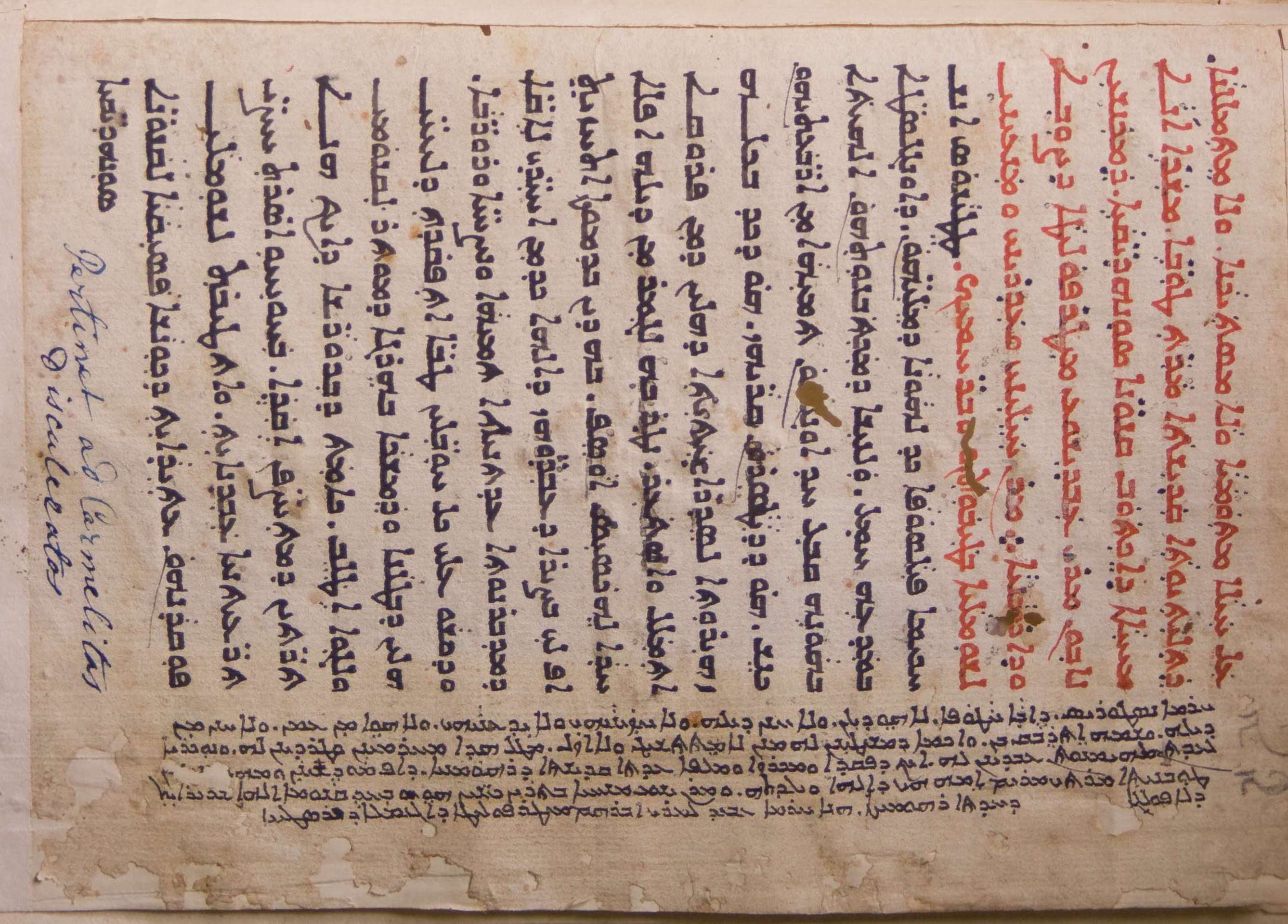 The first page of APSTCH EMAP 01 00010, rotated 90 degrees to view the page’s marginal note. The note is an anathema against Nestorius, written by Abraham of Angamaly, for whom this manuscript of the Nomocanon was created. (APSTCH EMAP 01 00010)

By most accounts, it would appear that the Synod of Diamper was successful at eliminating particular books from the libraries of the Syro-Malabar Catholic churches, which makes it all the more remarkable that at least some manuscripts survived the ban. We do not know the circumstances of how or why these particular manuscripts were preserved, but they do provide evidence that book bans never truly accomplish their goals.

Geddes, Michael. The History of the Church of Malabar, from The time of its being first discover’d by the Portuguezes in the Year 1501. Giving an account of the persecutions and violent methods of the Roman Prelates, to reduce them to the subjection of the Church of Rome. Together with the Synod of Diamper, celebrted in the Year of our Lord 1599. London, 1694.

Perczel, István. “Have the flames of Diamper destroyed all the old manuscripts of the Saint Thomas Christians?” The Harp, vol. XX (2006): 87–104.