Khwājahʹzādah’s Treatise on the Rainbow

July 7, 2022
Khwājahʹzādah’s Treatise on the Rainbow

This story is part of an ongoing series of editorials in which HMML curators and catalogers examine how specific themes appear across HMML’s digital collections. Dr. Celeste Gianni looks at The Celestial in this story from the Islamic collection.

Rainbows (in Arabic, qaws quzaḥ) are optical illusions caused by the reflection, refraction, and dispersion of light in water droplets that create the effect of a multicolored circular arc appearing in the sky. 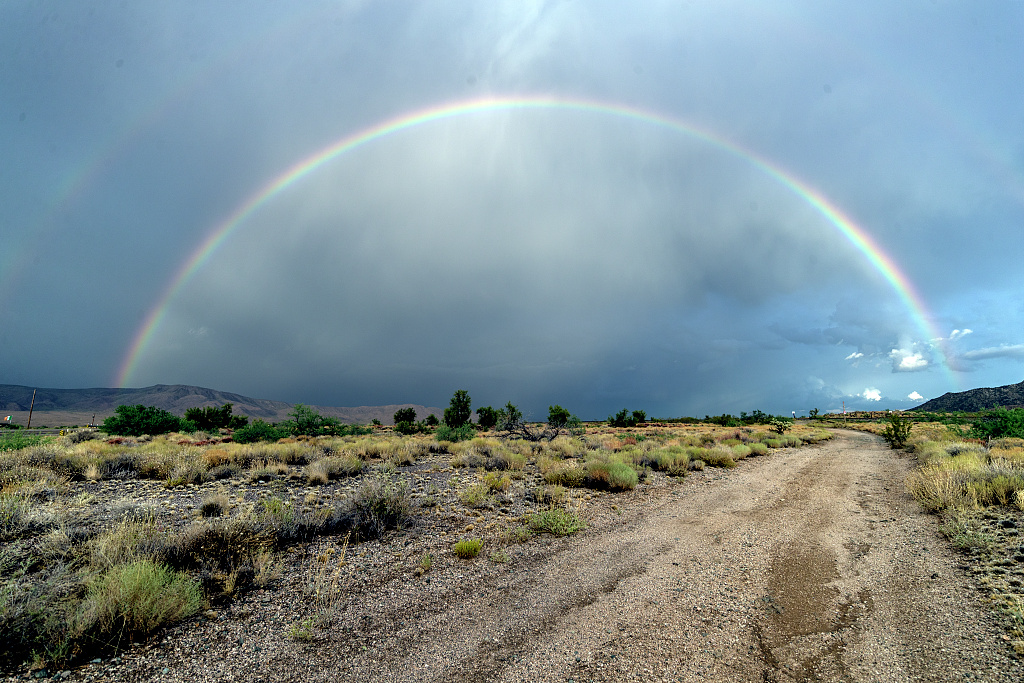 The first attested studies on the rainbow are the empirical observations and descriptions of the phenomenon by Alexander of Aphrodisias (3rd century BCE) and Aristotle (383–322 BCE). However, a more scientific approach to the subject came from Islamic astronomers and scientists. The earliest such studies are from the optician Alhazen (965–1039 CE), who described the phenomenon of refraction of light in his Book of Optics and Treatise on Light, and from Avicenna (980–1037 CE), whose Kitāb al-Shifāʾ describes rainbows and refutes Aristotle’s idea that rainbows are formed in the clouds, stating instead that they form in the narrow layer of fog between the sun, the cloud, and the observer.

Within the Islamic tradition, a later and much lesser known work on rainbows, written in Arabic, is the short treatise Muqaddimāt sabʻ fī maʻrifat qaws quzaḥ (Treatise on the Rainbow) by Muṣṭafá ibn Yūsuf Khwājahʹzādah, an Ottoman scholar and philosopher from Bursa, Turkey, active in the 15th century and also known as Muslihuddin Efendi and Hocazâde.

Against his father’s will, Khwājahʹzādah left his job as a merchant to focus on his education, and eventually was presented to the Sultan Mehmed II by the Grand Vizier, Mahmud Pasha (1420–1474 CE). He started to work at the Sultan’s court in Istanbul where he wrote his most famous work, Tahāfut al-falāsifah, a treatise on the controversies regarding philosophy and Islam, sparked by Ghazālī’s treatise of the same name and the various responses to it. Following troubles at the court with other scholars, Khwājahʹzādah was sent to become qāḍī (judge) in Edirne and Istanbul (from 1466 to 1467 CE) and a teacher at the Sultaniye Madrasah in Bursa, where he died in 1487 or 1488 CE.

Copies of Khwājahʹzādah’s Treatise on the rainbow are not rare. There are four copies held at the Süleymaniye Library in Istanbul, and in HMML Reading Room there are two digitized copies of this treatise in manuscripts USJ 00213 and USJ 00214, as well as one microfilm copy (Cod. Mixt. 1111, HMML microfilm 23842).

USJ 00213 is a 17th-century manuscript containing treatises on various subjects, purchased by Louis Cheikho in Mumbai in 1895 CE for the collection of the Bibliothèque orientale at the Université Saint-Joseph in Beirut, Lebanon, where it remains to this day. The third part of this manuscript includes two different treatises on the rainbow: an anonymous work (fol. 43r–44r) and the treatise by Khwājahʹzādah (fol. 41v–42v). 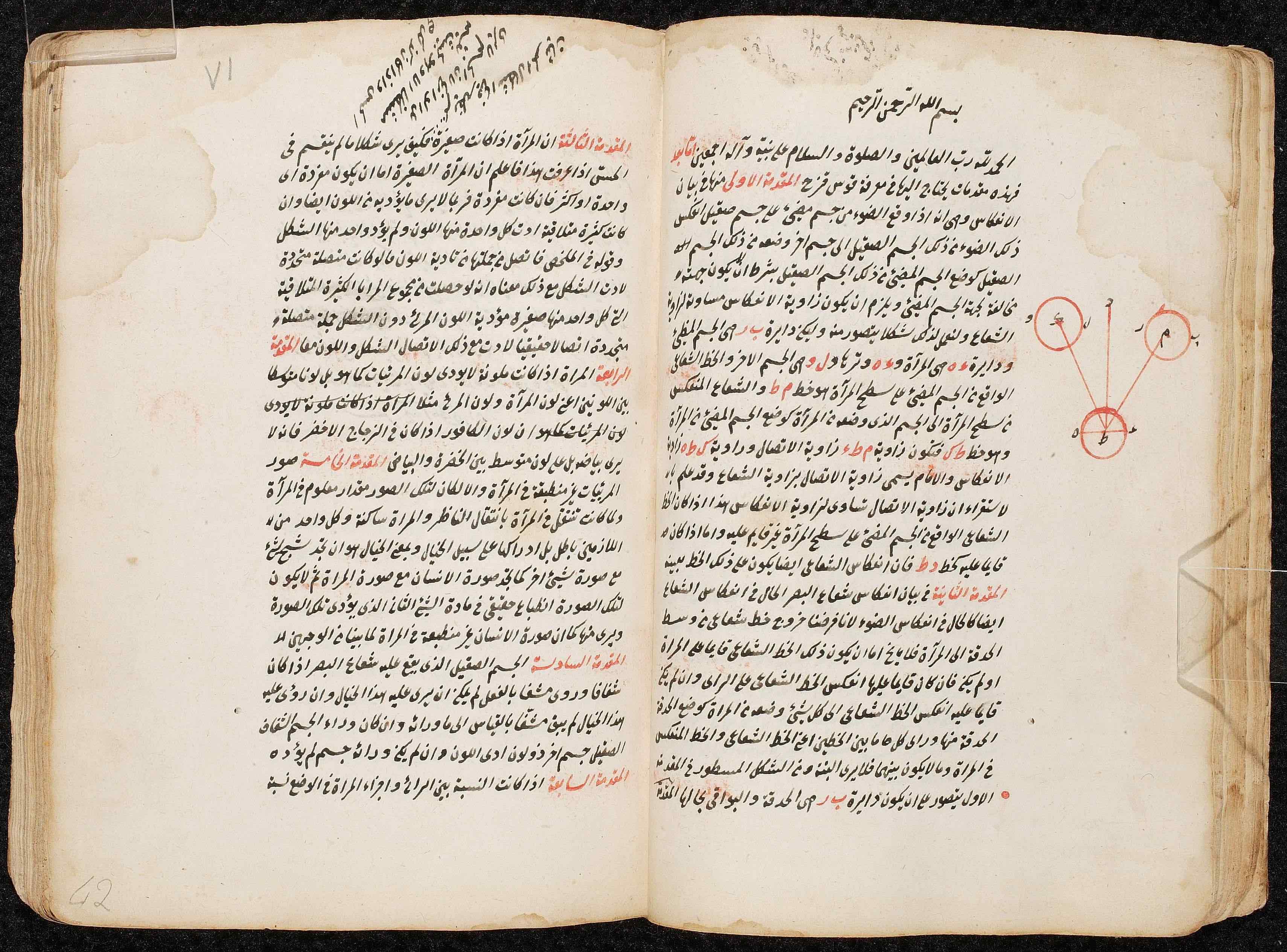 The first two folia of the Treatise on the rainbow by Khwājahʹzādah. The red ink marks the headings of the seven premises discussed by the author in this short work. (USJ 00213)

Manuscript USJ 00214—part of the same collection as USJ 00213—is an 18th century manuscript that includes two treatises: Khwājahʹzādah’s treatise (fol. 1v–2v) and an anonymous treatise on the calculation of the rising of the moon and the stars, written in Ottoman Turkish and accompanied by astronomical tables describing the properties of the Zodiac signs and the planets (fol. 5v–12r).

Khwājahʹzādah’s Treatise on the rainbow focuses on the refraction and reflection of light involved in the phenomenon of the rainbow. It introduces these topics with seven premises (muqaddimah) that compare the refraction and reflection of light on a mirror to that of the sun’s rays on water drops, with clouds functioning as a background. Through this comparison, Khwājahʹzādah describes how sun rays reflect and how they are perceived by the human eye, as well as how colors and images are formed and perceived by the human eye. The treatise is often accompanied by a diagram that shows how the angle of reflection of light on a mirror changes depending on the angle of incidence of the light.

USJ 00214 includes the Treatise on the rainbow by Khwājahʹzādah, with a more detailed diagram explaining the angles of reflection of light on a mirror. (USJ 00214)

Khwājahʹzādah’s Treatise on the rainbow stands out among all his other works, which focus more on philosophical and theological matters, by discussing the purely scientific aspects of this meteorological phenomenon. The reasons for this author to write on this particular topic are unknown. However, one cannot deny how beautiful and intriguing rainbows are; perhaps that was reason enough for Khwājahʹzādah’s interest in this colorful optical illusion!

Ziaee, Ali Akbar. “Khojazāda’s contributions to Islamic sciences: The case study of rainbow”. In Proceedings of the International Symposium on Khojazāda. Bursa: 2011.

ABOUT THE AUTHOR: Dr. Celeste Gianni is cataloger of Arabic manuscripts at HMML.
Story Tags:
All StoriesCollectionsEditorialsSeries - The Celestial
Share:
Previous Story
Next Story 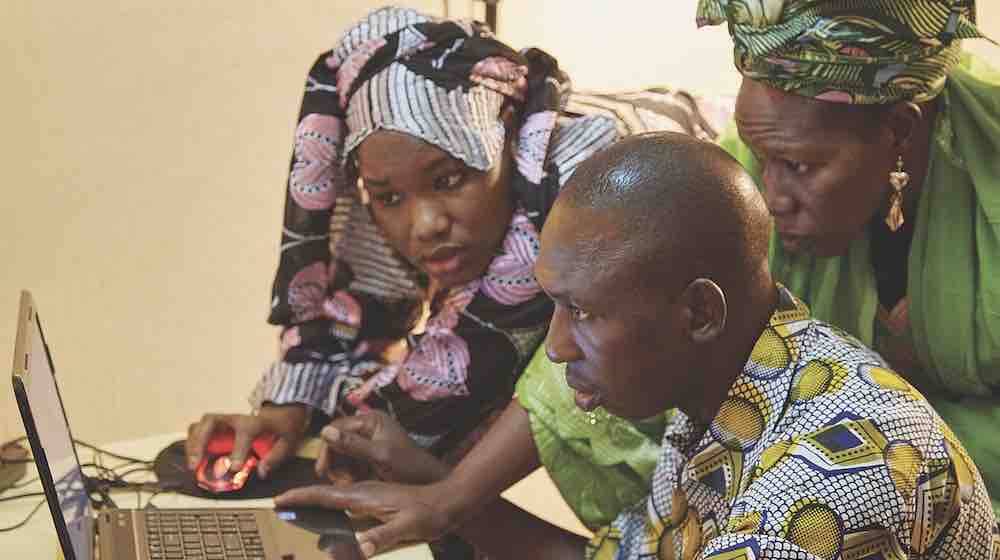 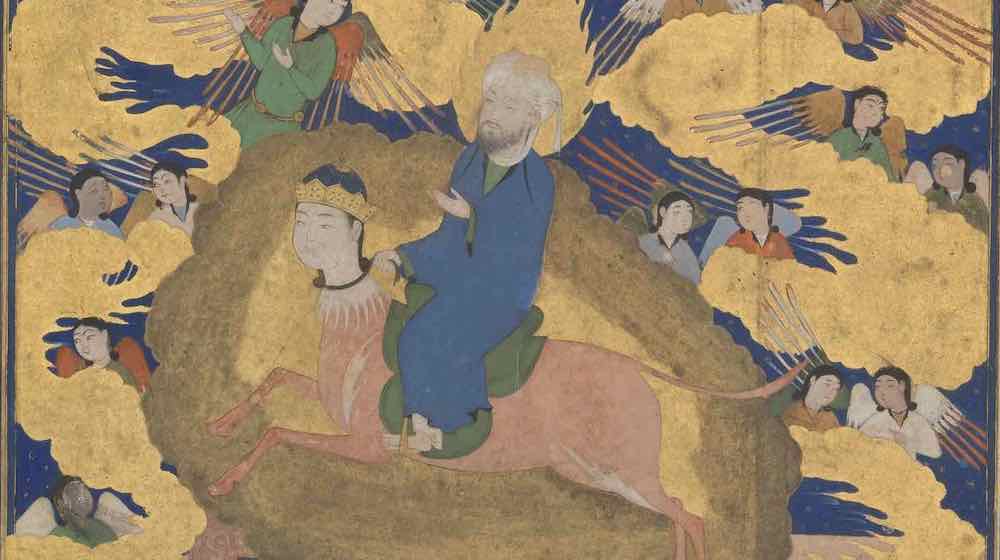 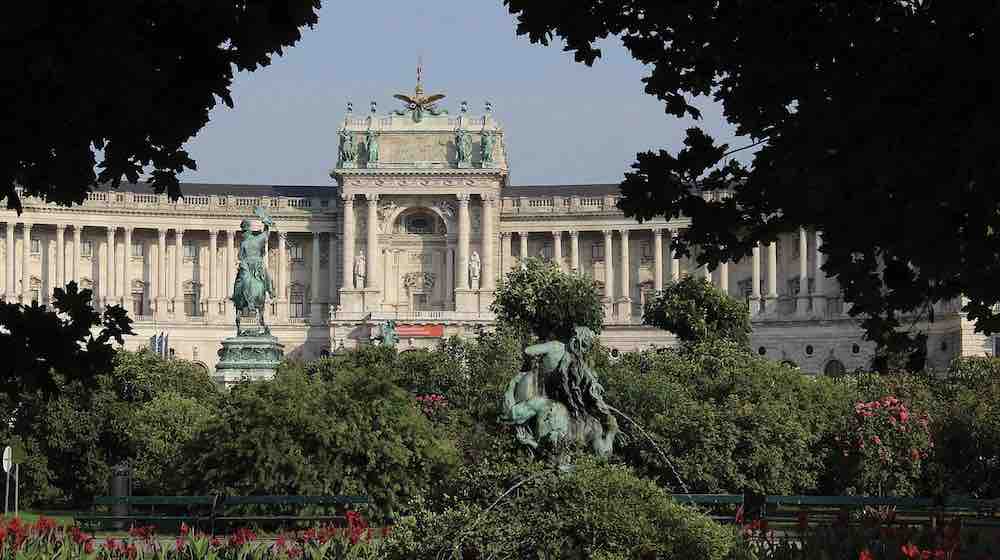