In the spring of 2012, the desert city of Timbuktu in northern Mali was attacked and occupied by a coalition of radical Islamist forces. The attack brought Timbuktu to people around the world, as news spread that the invaders had ransacked ancient libraries and destroyed historic shrines dedicated to local Muslim saints. For historians, the name Timbuktu evokes a golden age when this oasis was a crossroads of trade and learning. Photos of burned manuscripts suggested that the entire historical memory of Timbuktu had been lost.

After the initial shock, another story emerged, one of rescue and preservation. Most of Timbuktu’s manuscripts—more than 200,000 from some 36 libraries—had been taken out of the city in advance of the occupation. The rescue was led by Dr. Abdel Kader Haidara, scion of one of the important families of Timbuktu and caretaker of the Mamma Haidara Library, the city’s largest. Transporting manuscripts in metal boxes via boat and truck, Dr. Haidara brought the manuscripts to the Malian capital of Bamako, where they remained packed in their chests while a plan was devised to sort, digitize, and describe them. 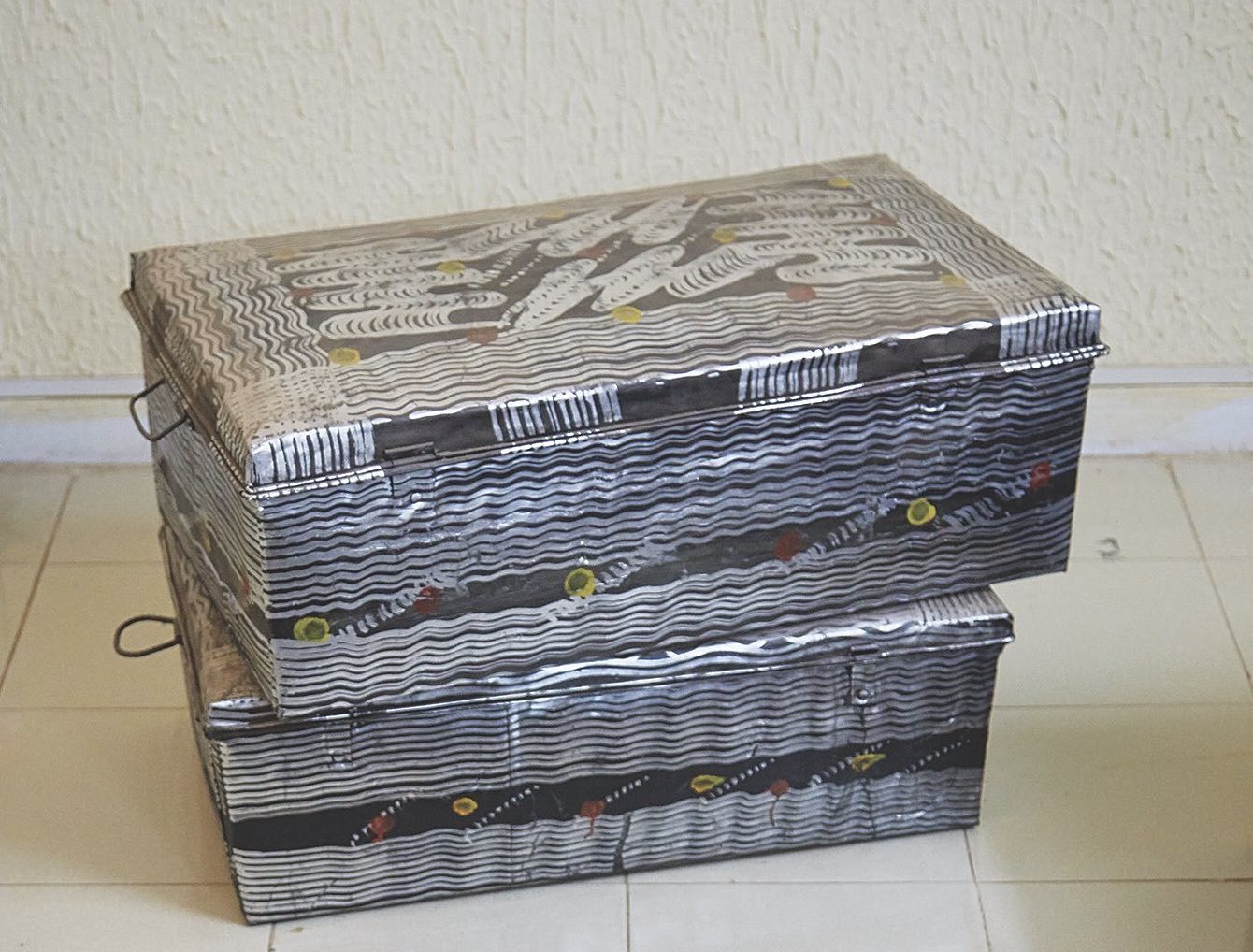 Metal boxes used by caretakers of Timbuktu’s libraries to store and transport manuscripts to safety prior to the 2012 occupation.

With Walid Mourad (HMML field director for the Middle East, Africa, and South Asia), I visited Bamako in August 2013 to meet Dr. Haidara and propose a large-scale digitization project. A second visit in December with Wayne Torborg (HMML director of digital collections and imaging) and HMML board members Tom Barrett and Tom Joyce sealed the deal, and work began that same month. 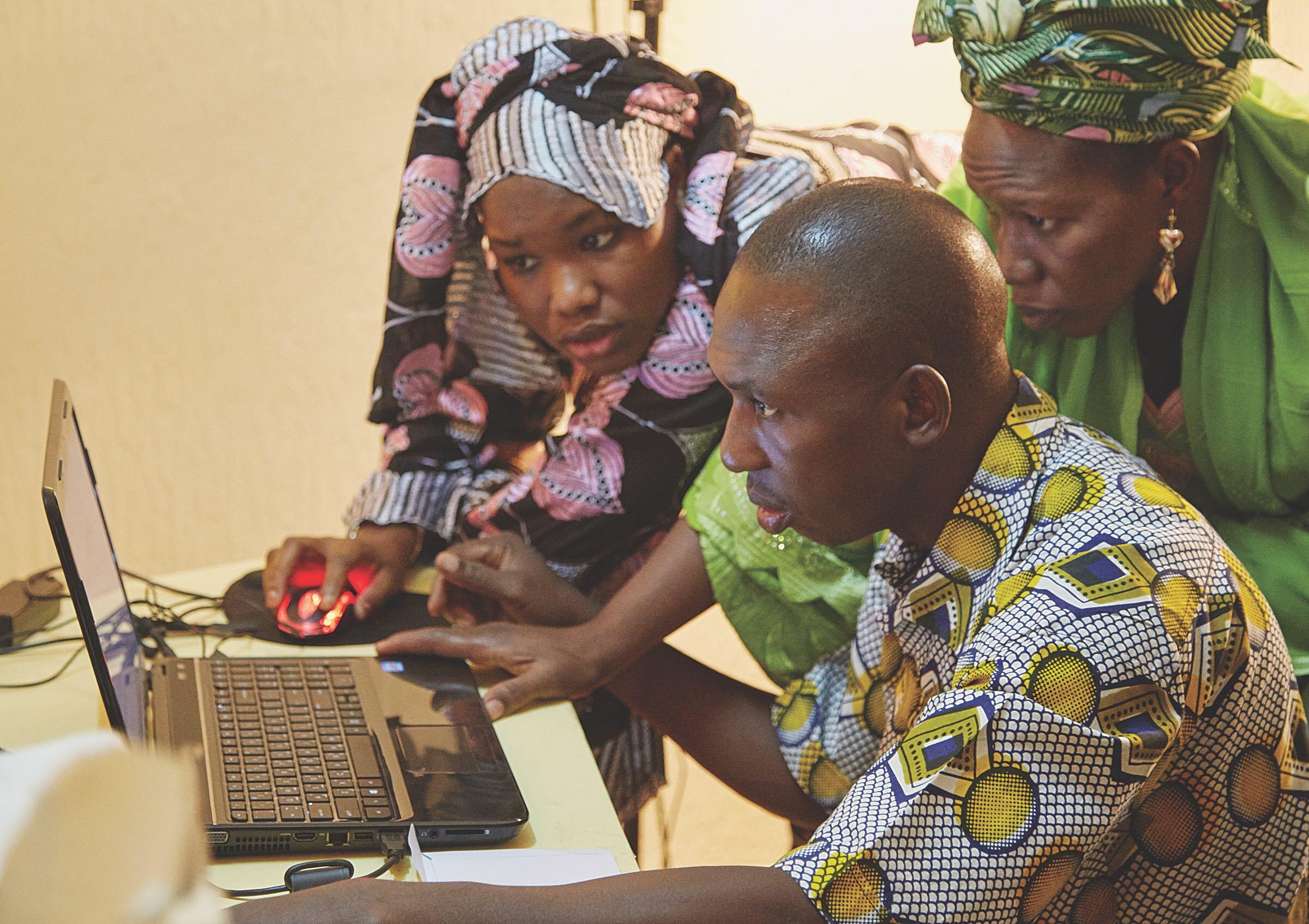 Working with Dr. Haidara’s organization (SAVAMA-DCI) and the Centre for the Study of Manuscript Cultures in Hamburg, Germany, HMML’s digitization project eventually expanded to 12 studios, supported by an Arcadia Fund grant to HMML, individual HMML donors, and occasional short-term support from SAVAMA-DCI’s other partners.

With work in Bamako well underway, HMML turned its attention to libraries that had remained in Timbuktu, hidden by their owners in the same manner as when the Moroccans invaded in the late sixteenth century and the French in the nineteenth.

Sophie Sarin, a Swedish-British expat who’d been living in Mali for many years, made initial contact with the leaders of the three principal mosques in Timbuktu and secured their agreement for a digitization project. Work began in 2017 as a partnership between HMML and the British Library’s Endangered Archives Programme and continued as HMML’s project until completion in 2020. 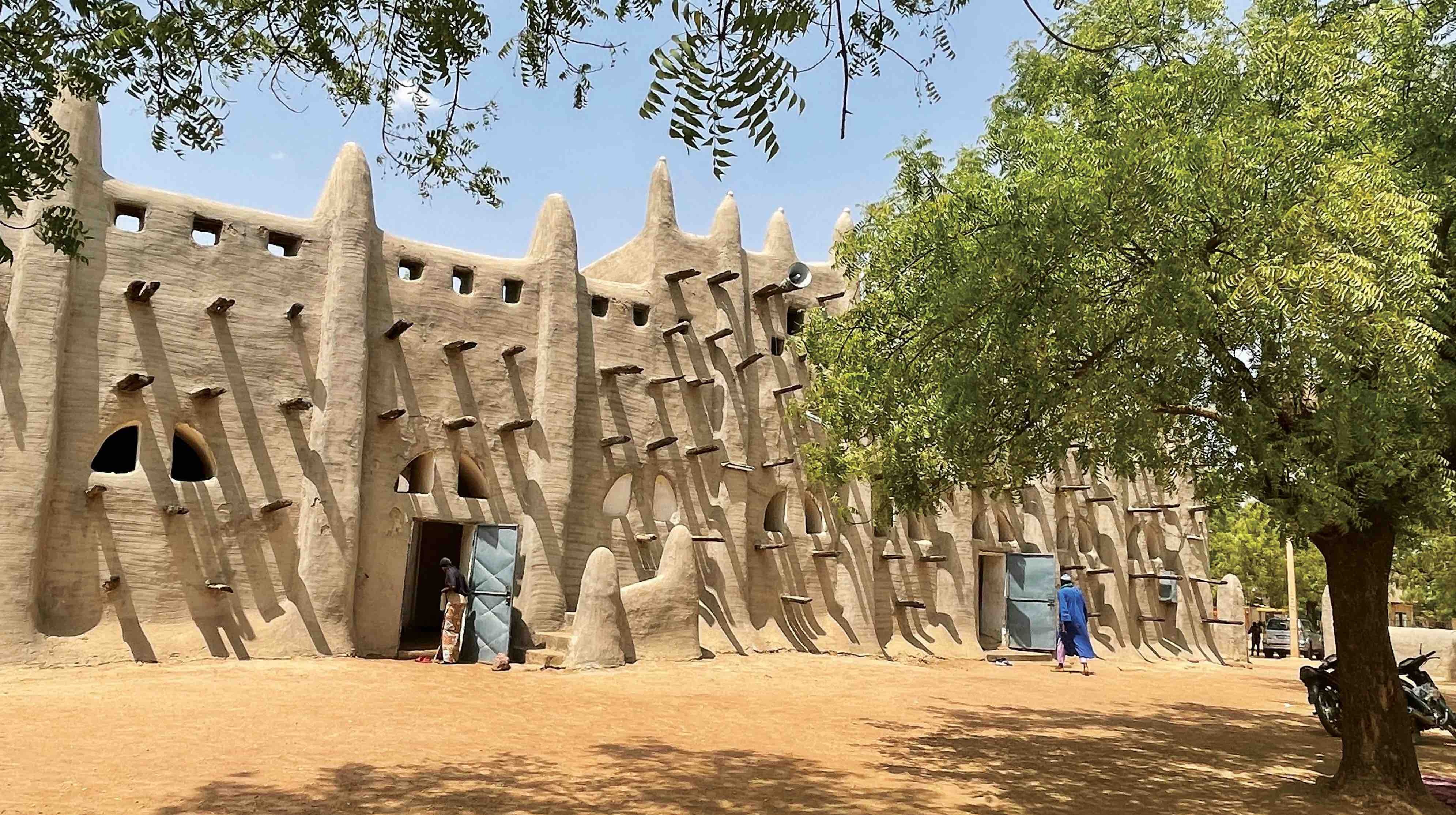 Working now for HMML as a project director, Ms. Sarin’s own digitization initiative in Djenné, sister city to Timbuktu, was adopted by HMML after several years of sponsorship by the British Library.

In both Timbuktu and Djenné, HMML partnered with AMALIA, an Italian conservation association founded by Dr. Maria Luisa Russo. AMALIA trains local librarians in how to make protective boxes for their manuscripts and other conservation treatments. 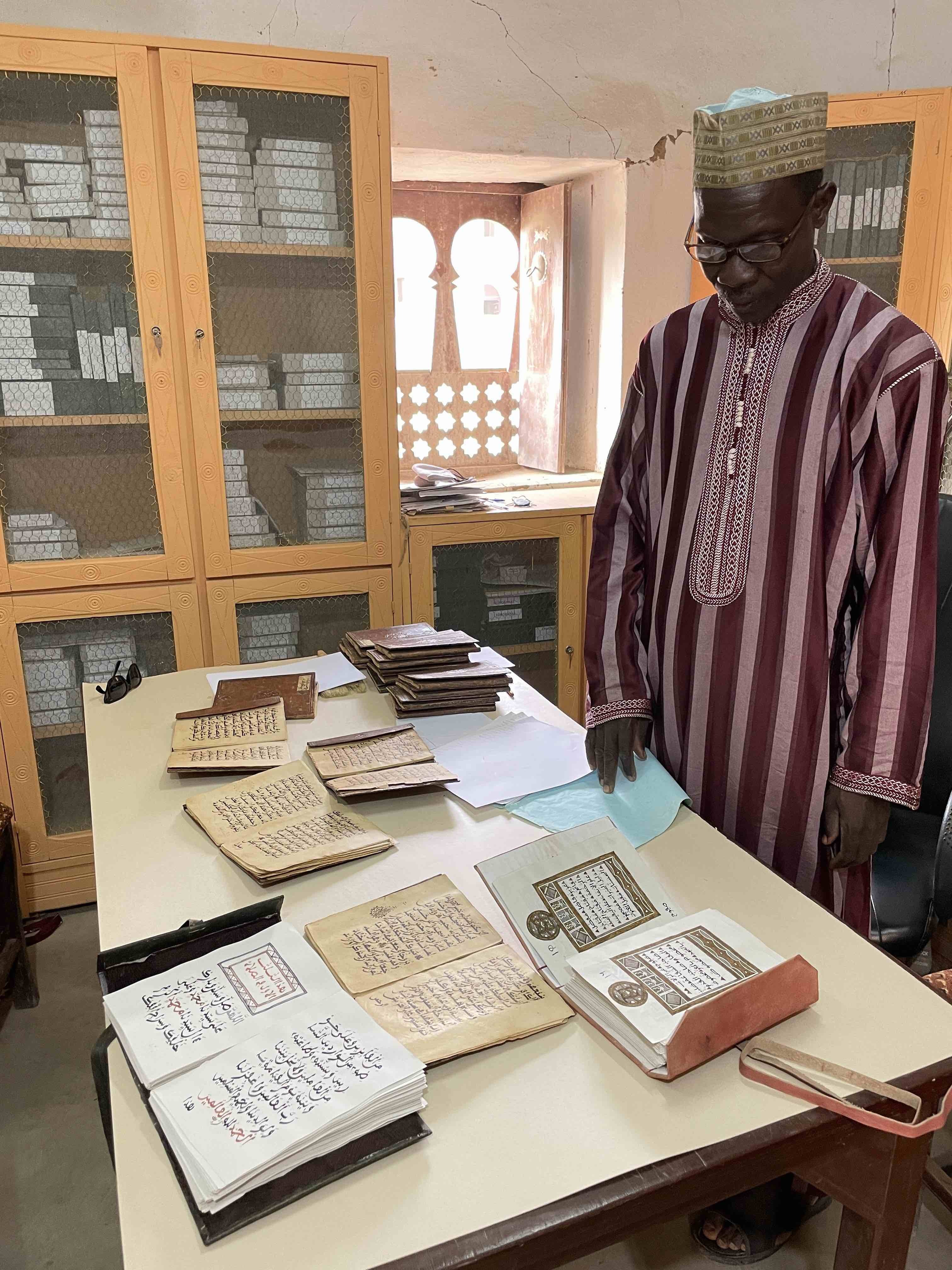 Garba Yaro, of the Djenné Manuscripts Library, in 2021.

Today, cameras are still operating in Bamako and Djenné. The key task—reading the manuscripts and describing them for online access—is well underway with two HMML catalogers of West African manuscripts: Dr. Ali Diakité and Dr. Paul Naylor, with us through grants from the Mildred Kellogg Trust and the National Endowment for the Humanities. Dr. Diakité and Dr. Naylor have already made more than 17,000 of Mali’s manuscripts available online in HMML Reading Room, including the entire collection of the Aboubacar Ben Said Library and the Bibliothèque de Manuscrits al-Imam Essayouti. Their work is reshaping perceptions of an important tradition of African Islam and has already been featured in global media. You can read more about their findings at hmml.org/stories/tags/mali.

In the last few years, the general security situation in Mali has deteriorated. Visits to Timbuktu and many other locations now require support from United Nations peacekeepers. The central government’s control of most of the country is weak or nonexistent, and much of Mali has become a “no-go” area for visitors.

A coup in 2020 imposed military rule, and promised elections have been repeatedly delayed. Neighboring countries have levied sanctions and land blockades, and France is reducing their military presence. Fortunately, HMML was able to get preservation projects off the ground, and we continue to support our partners through difficult times. The project in Bamako should be completed this year. We will keep our colleagues in Djenné busy until they run out of manuscripts. And with each photograph that arrives at HMML, the written heritage of Mali can be widely shared, learned from, and celebrated. 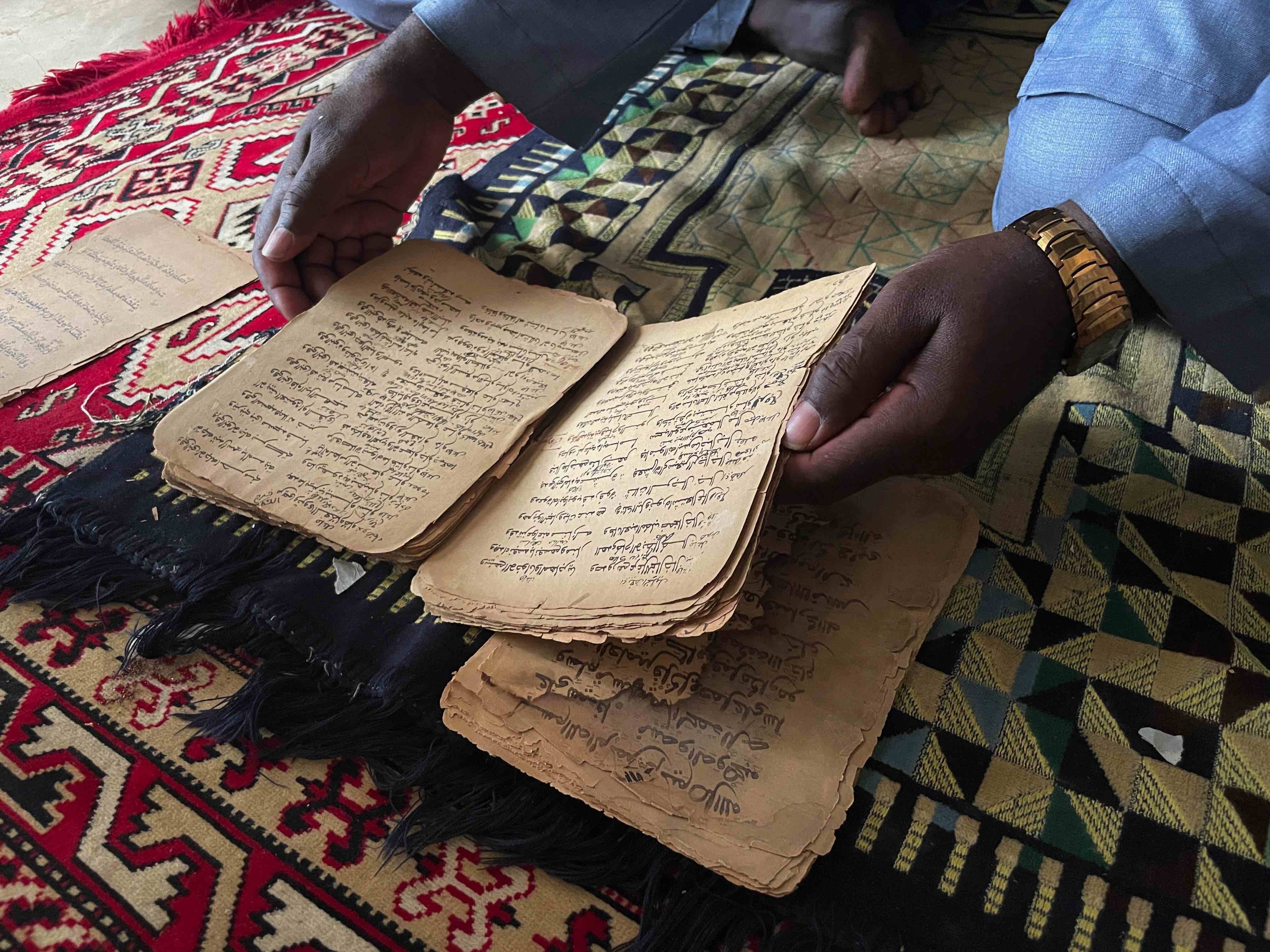 Poem in praise of the Prophet, shared during a site visit in 2021. Learn more about the libraries HMML has partnered with in Mali.

This story originally appeared in the Summer 2022 issue of HMML Magazine.