April 28, 2022
A Tale of Two Bears — Astronomy in Austrian Libraries

This story is part of an ongoing series of editorials in which HMML curators and catalogers examine how specific themes appear across HMML’s digital collections. Dr. Matthew Z. Heintzelman looks at The Celestial in this story from the Western European collection. 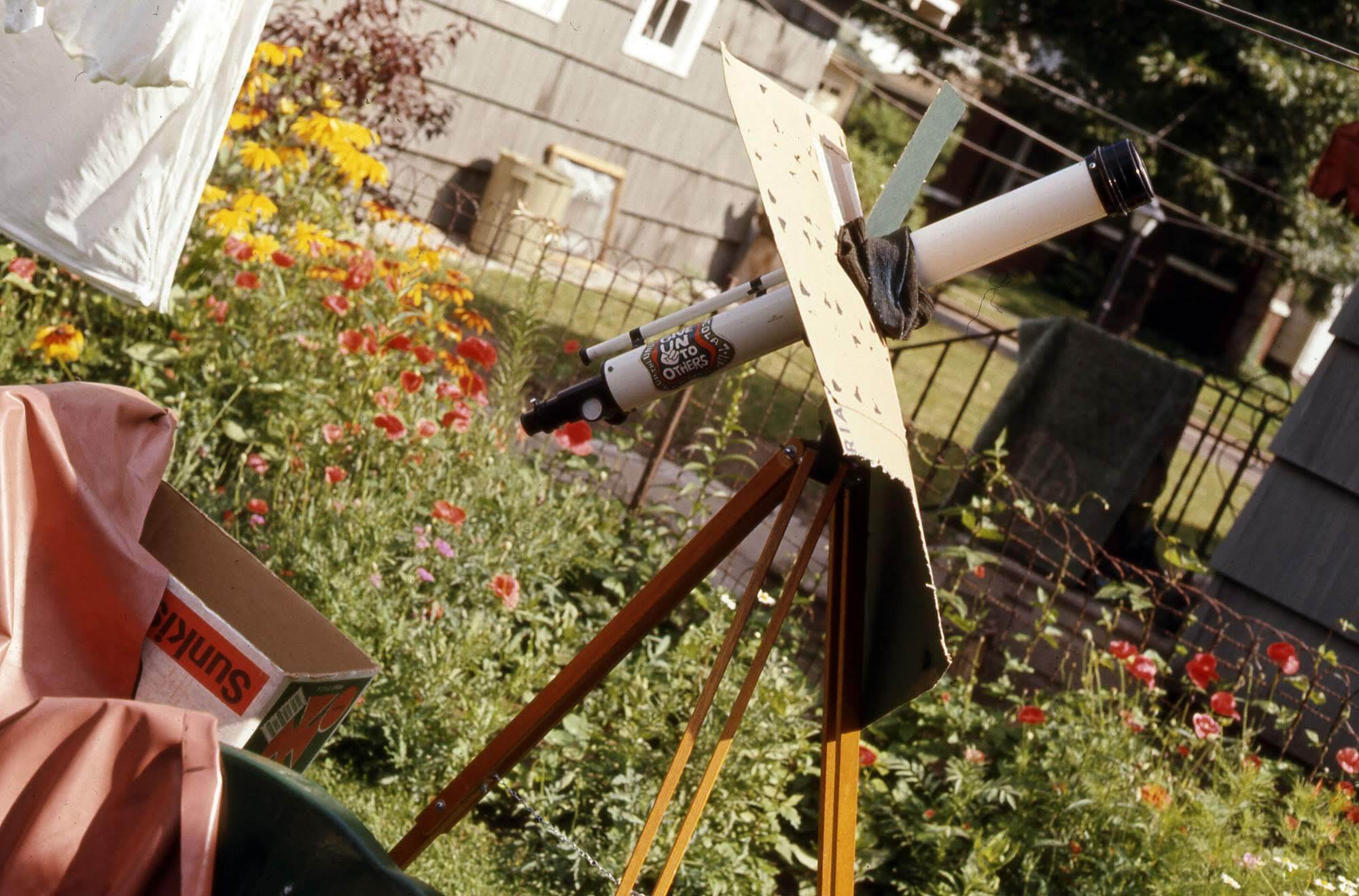 Using a telescope as a solar projector in 1972. Photograph by James Heintzelman, father of Dr. Matthew Z. Heintzelman.

When I was a boy, the night sky always fascinated me—stars, moon, planets, nebulae, comets, and all manner of celestial phenomena. In July 1969, my family watched astronauts walking on the moon through a fuzzy broadcast on a black-and-white television. When I reached my early teenage years, I even had a very inexpensive telescope, and in 1972 I used it to follow a solar eclipse.

Unbeknownst to me, a nascent library in central Minnesota was tracking its own kind of stars in those years—microfilming more than 13,000 medieval and early modern manuscripts at the Austrian National Library.

Right from the very start of HMML’s work in April 1965, the mission has been to photograph entire collections of manuscripts, because no one knows which manuscripts might be significant in the future. In the first decades (1965–2003), the photographs were made on microfilm, primarily of manuscripts that were dated before 1550 or 1600. In 2003, HMML changed to digital photography and today photographs manuscripts in libraries around the world. Over the past 57 years, HMML has built an extremely diverse photographic collection representing handwritten traditions and cultures in more than 40 countries.

What follows is a brief cosmic tour of resources on astronomy in collections within Austria, which include materials in Latin, German, Greek, Hebrew, Arabic, and Persian.

Astronomical texts and diagrams can be the sole subject of a book, but they can also appear alongside a wide range of other content, such as:

Sometimes these works are expansive treatments of astronomical knowledge received from the ancients. Alternatively, they may be only brief notes of some cosmic event, such as the passing of a comet. Some texts are very practical, like a computus (calculation/computation) or astronomical tables, while others feature more fanciful depictions of constellations based on ancient mythology. Indeed, the Zodiac constellations appear quite often in calendars at the front of Books of Hours, breviaries, and other liturgical books.

HMML filmed more than 200 manuscripts in Austria that contain texts on astronomy. These come from several libraries across the country, although most are from the Austrian National Library. The texts are attributed to various authors, including Hyginus, Michael Scot, Zakarīyā ibn Muḥammad al-Qazwīnī, Joannes de Sacro Bosco, the Venerable Bede, and many others. 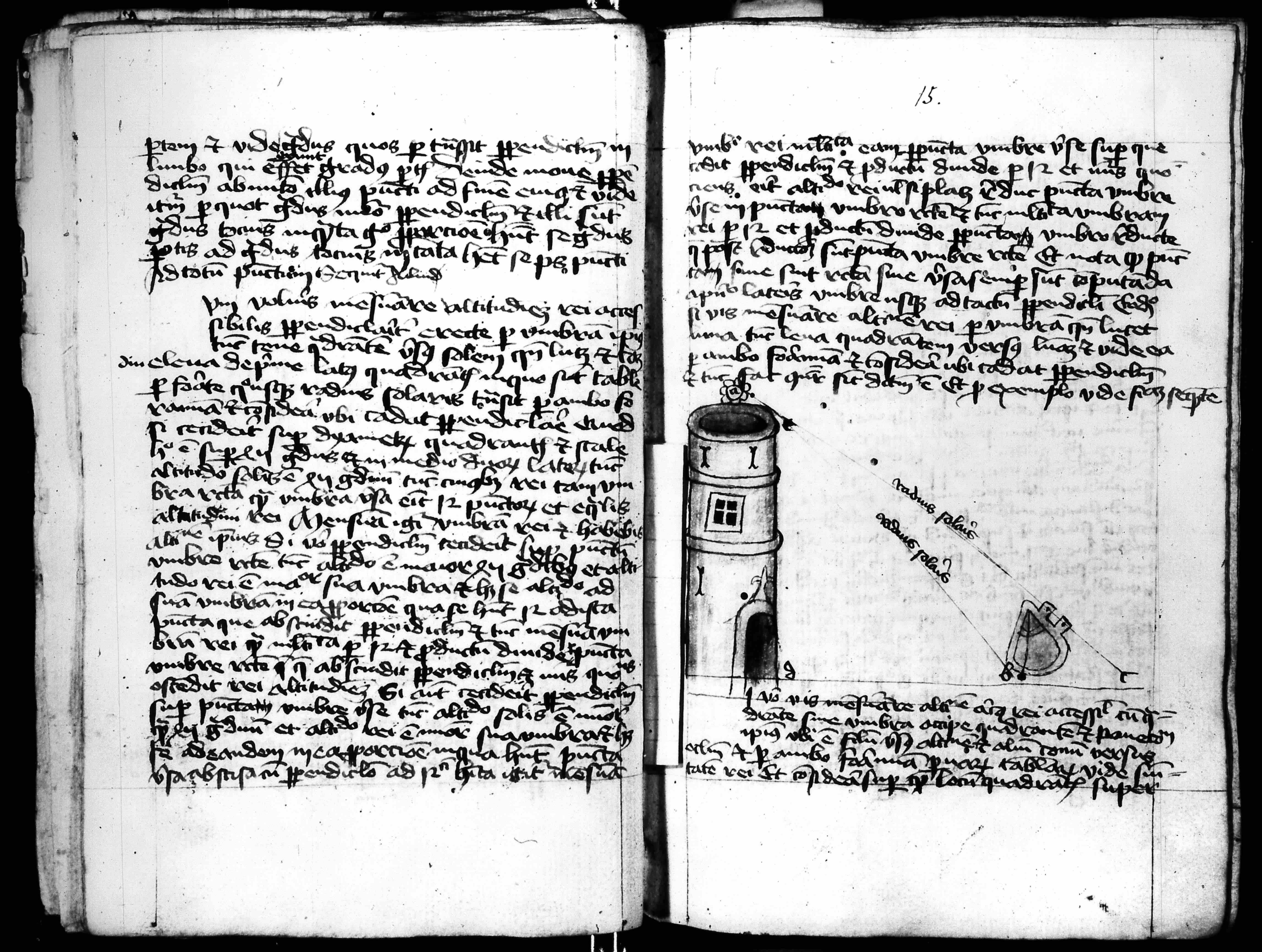 Among the first manuscripts photographed by HMML was Codex 78 (HMML microfilm 72) in the Benedictine Abbey of Kremsmünster. This 14th/15th-century book was pieced together from multiple sources and contains not only texts on astronomy but also theological texts by Ambrose, Augustine, and Heinrich von Langenstein, as well as collections relating to canon law and correspondence.

The manuscript’s first two texts are by Johannes von Gmunden (ca. 1385–1442): the Calendarium astronomicum and a treatise on the quadrant, an astronomical tool for measuring angles that has roots going back as far as Ptolemy in the second century CE. Another 15th-century manuscript (University of Salzburg Codex M III 36, HMML microfilm 11489) depicts the allegorical figure of Astronomia studying the stars with a similar quadrant. Below her, Ptolemy sits before an open book. 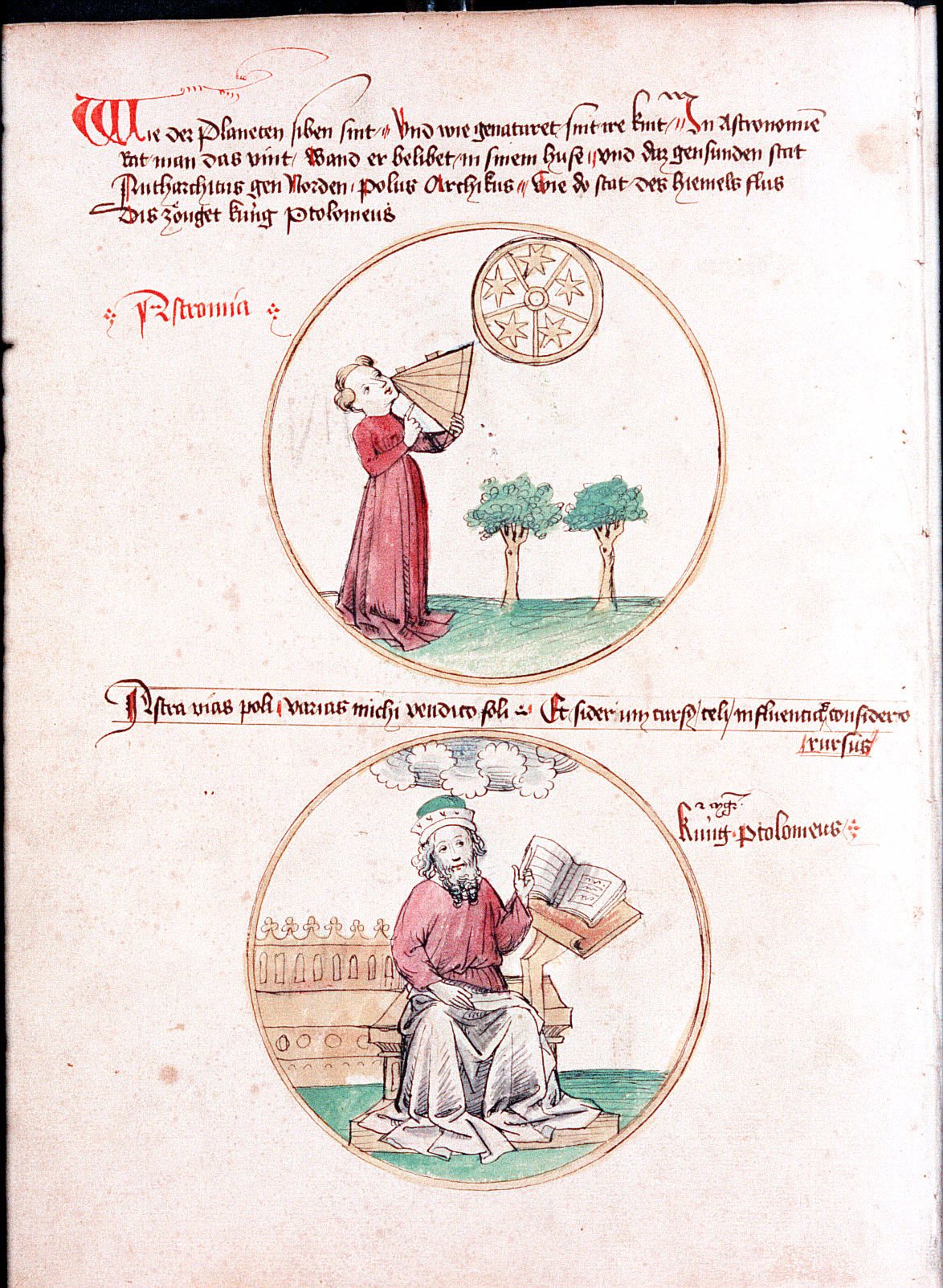 A quadrant in use, from a 15th-century manuscript at the University of Salzburg. (Codex M III 36, HMML microfilm 11489)

For many of us, our first impressions of the stars are framed within a sophisticated assembly of constellations whose fanciful representations group together stars that are actually incredibly far apart from each other. Aratus, a Greek poet from the third century BCE, describes the importance of these stars for the human understanding of the universe:

“The numerous stars, scattered in different directions, sweep all alike across the sky every day continuously for ever. The axis, however, does not move even slightly from its place, but just stays forever fixed, holds the earth in the centre evenly balanced, and rotates the sky itself. Two poles terminate it at the two ends; but one is not visible, while the opposite one in the north is high above the horizon.

On either side of it two Bears wheel in unison, and so they are called the Wagons. They keep their heads forever pointing to each other’s loins, and forever they move with shoulders leading, aligned towards the shoulders, but in opposite directions.”

These two bears, Ursa Major and Ursa Minor, are also known as the Big Dipper and Little Dipper. At the tip of Ursa Minor’s tail is Polaris, the pole star around which the constellations rotate through the sky. Aratus explains that these two bears were immortalized because they saved Zeus from his angry father, Cronus:

“If the tale is true, these Bears ascended to the sky from Crete by the will of great Zeus, because when he was a child then in fragrant Lyctus near Mount Ida, they deposited him in a cave and tended him for the year, while the Curetes of Dicte kept Cronus deceived.”

Before describing other constellations, Aratus first provides more details on the three that are closest to Polaris:

“Between the two Bears, in the likeness of a river, winds a great wonder, the Dragon, writhing around and about at enormous length; on either side of its coil the Bears move, keeping clear of the dark-blue ocean. It reaches over one of them with the tip of its tail, and intercepts the other with its coil. […]

The coil winds past her very head, goes as far as her foot, then turns back again and runs upwards. In the Dragon’s head there is not just a single star shining by itself, but two on the temples and two on the eyes, while one below them occupies the jaw-point of the awesome monster.” 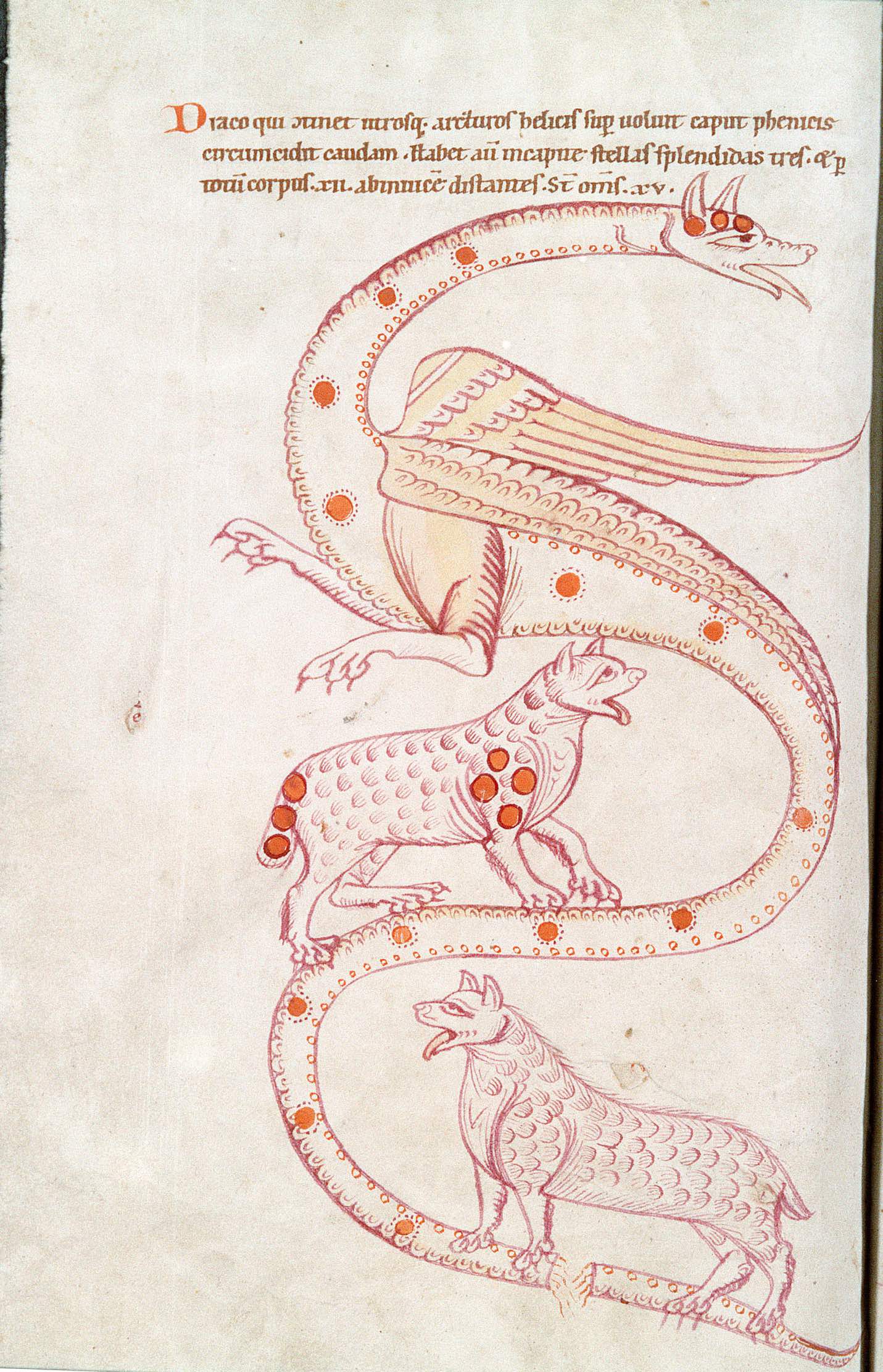 Catalog of constellations, in a 12th-century manuscript with works by Bede. (Stift Klosterneuburg 685, HMML microfilm 5666)

A Small Gallery/Galaxy of Constellation Manuscripts

We’ll close with several depictions of this one set of constellations: Ursa Major, Ursa Minor, and Draco (the dragon). Some of these illustrations appear in manuscripts with the Latin version of Aratus’ poem Phaenomena, and some appear with works by other authors.

These examples, dating from the 10th to the 16th centuries, are presented here in rough chronological order. They are held by six different libraries in books written in three different languages: Latin, Arabic, and German. Most of the depictions are in pen and ink, with only two manuscripts showing any illumination to help the stars sparkle.

While HMML filmed several of these manuscripts at least partially in color, the complete copies only exist at HMML in black-and-white microfilm—a medium that, not unlike the television that showed me the first moonwalk, has an incredible power to transport and transform. 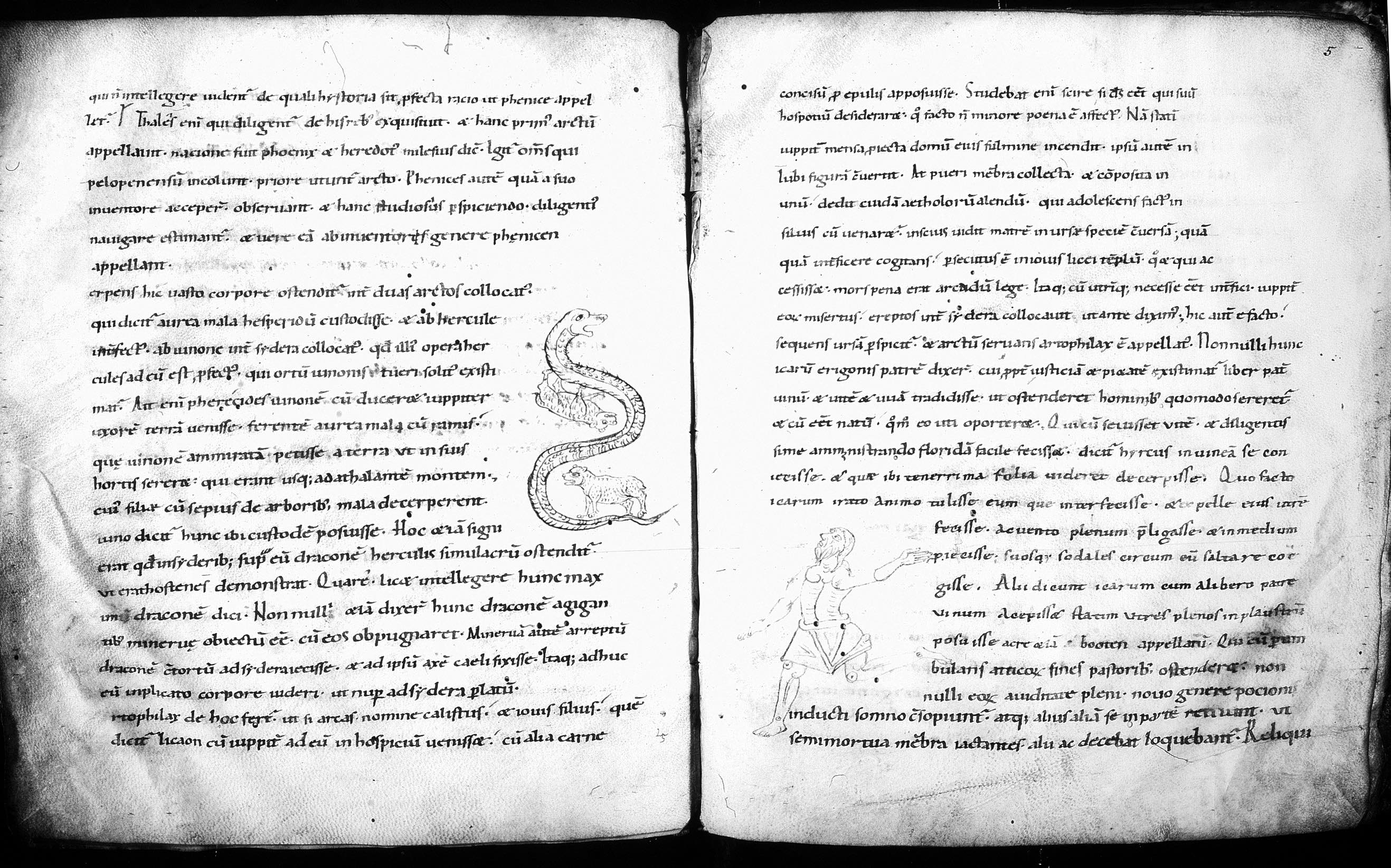 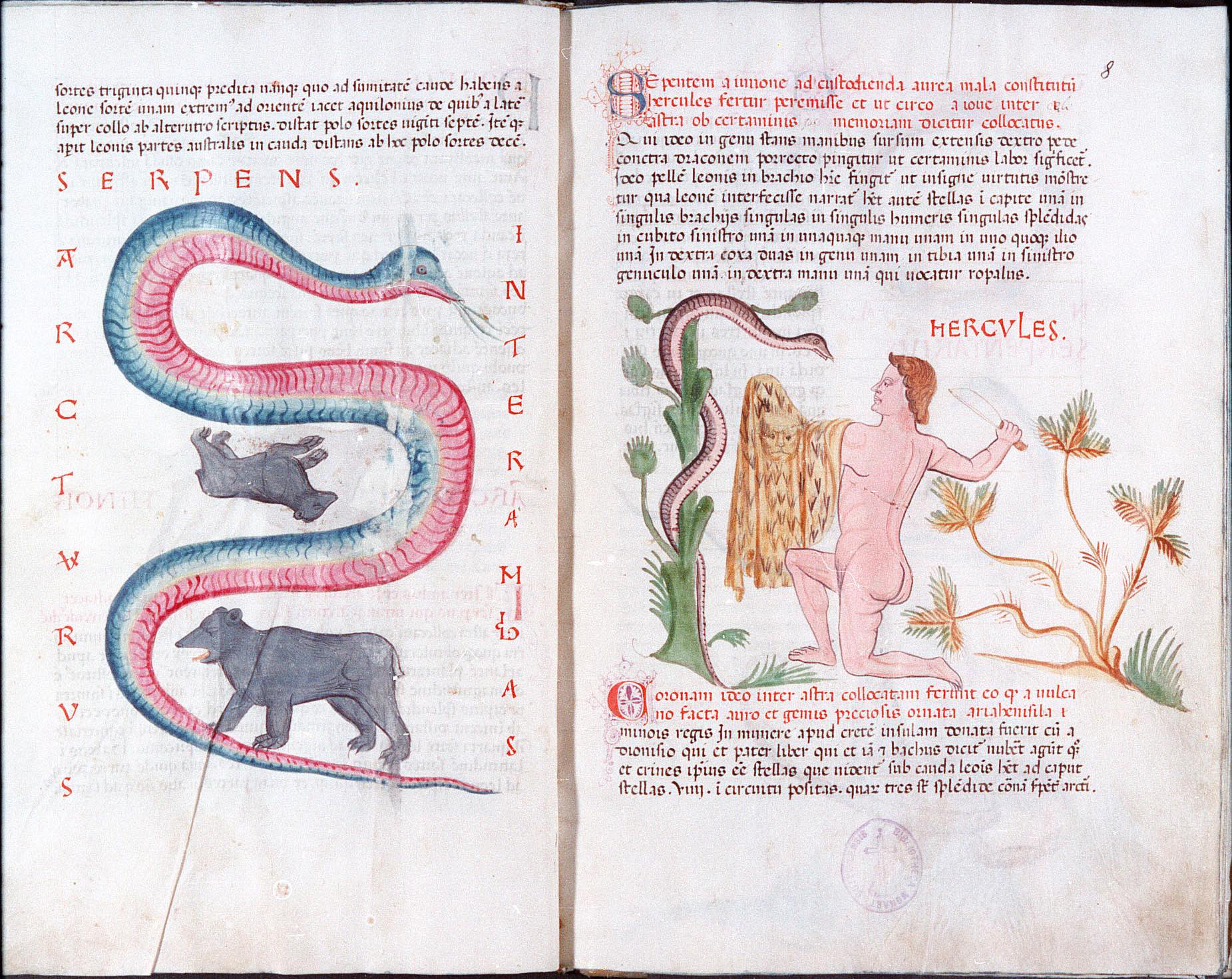 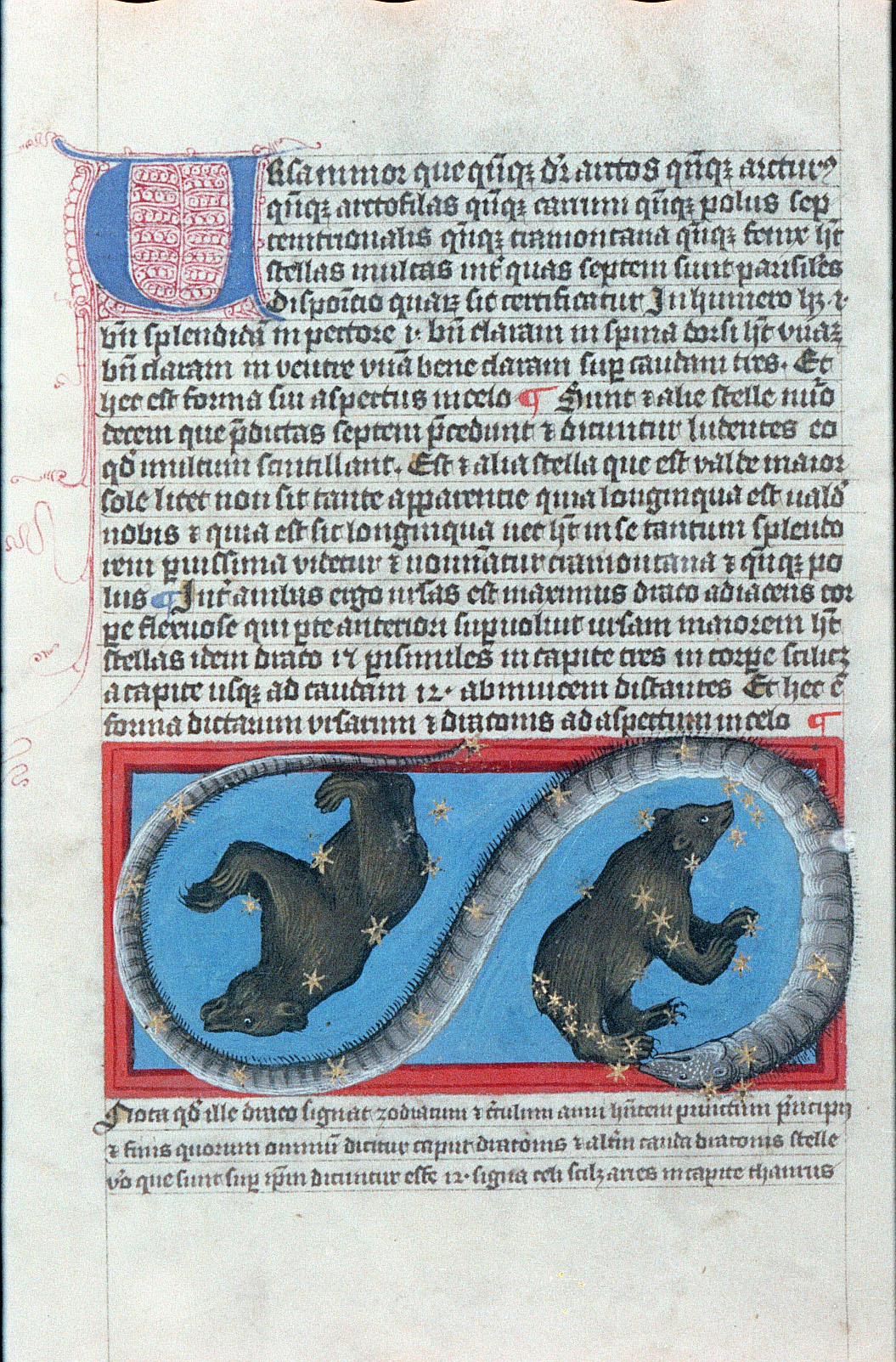 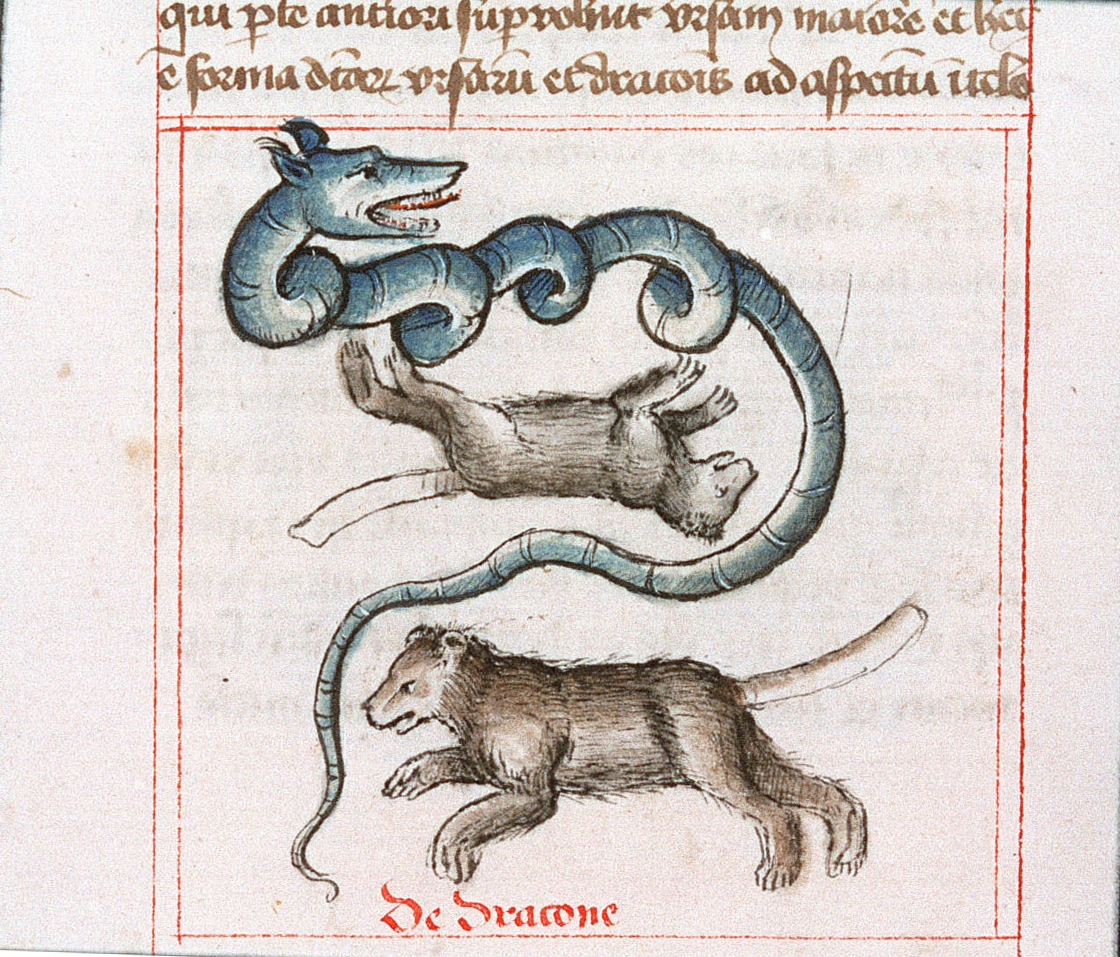 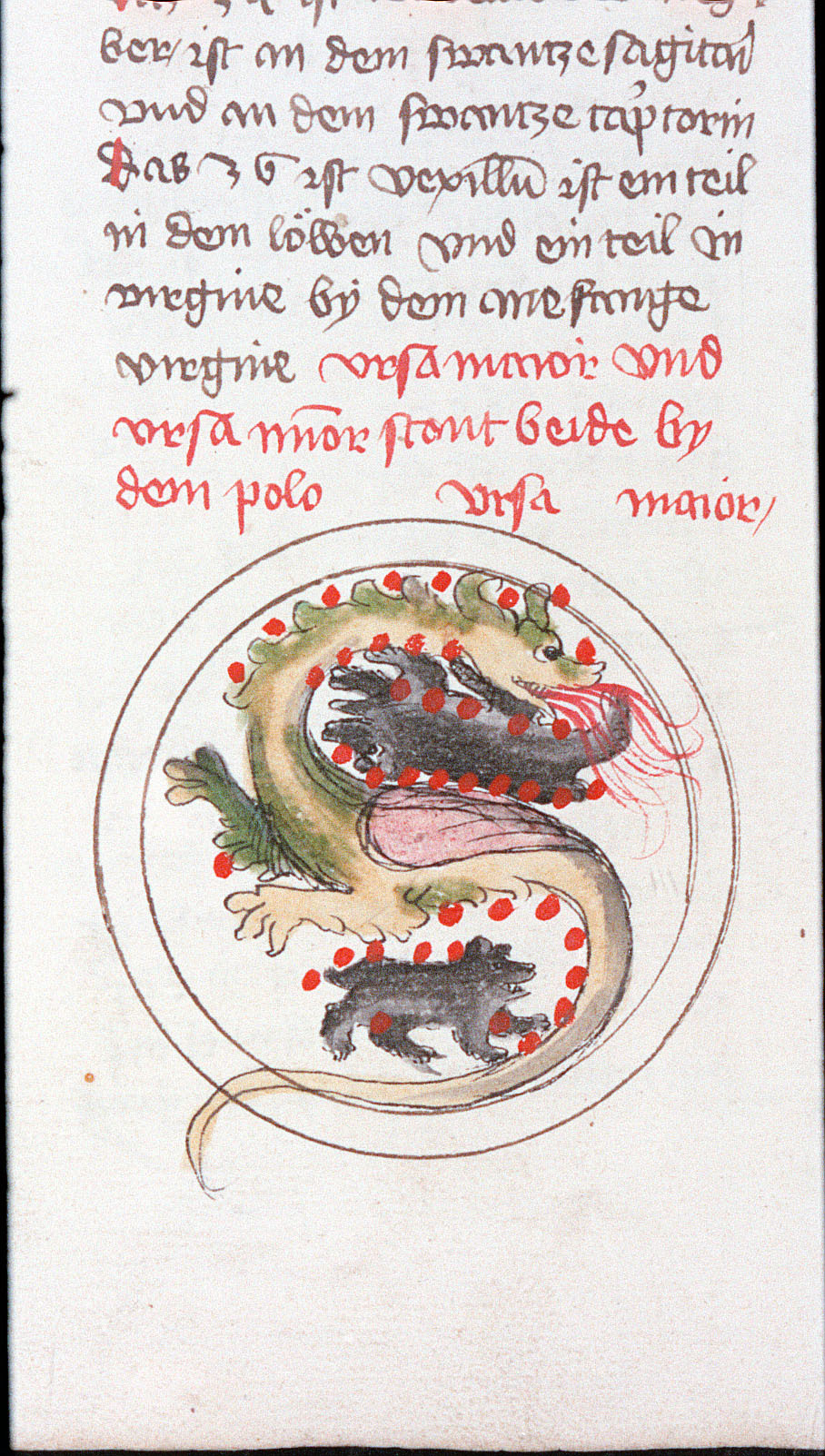 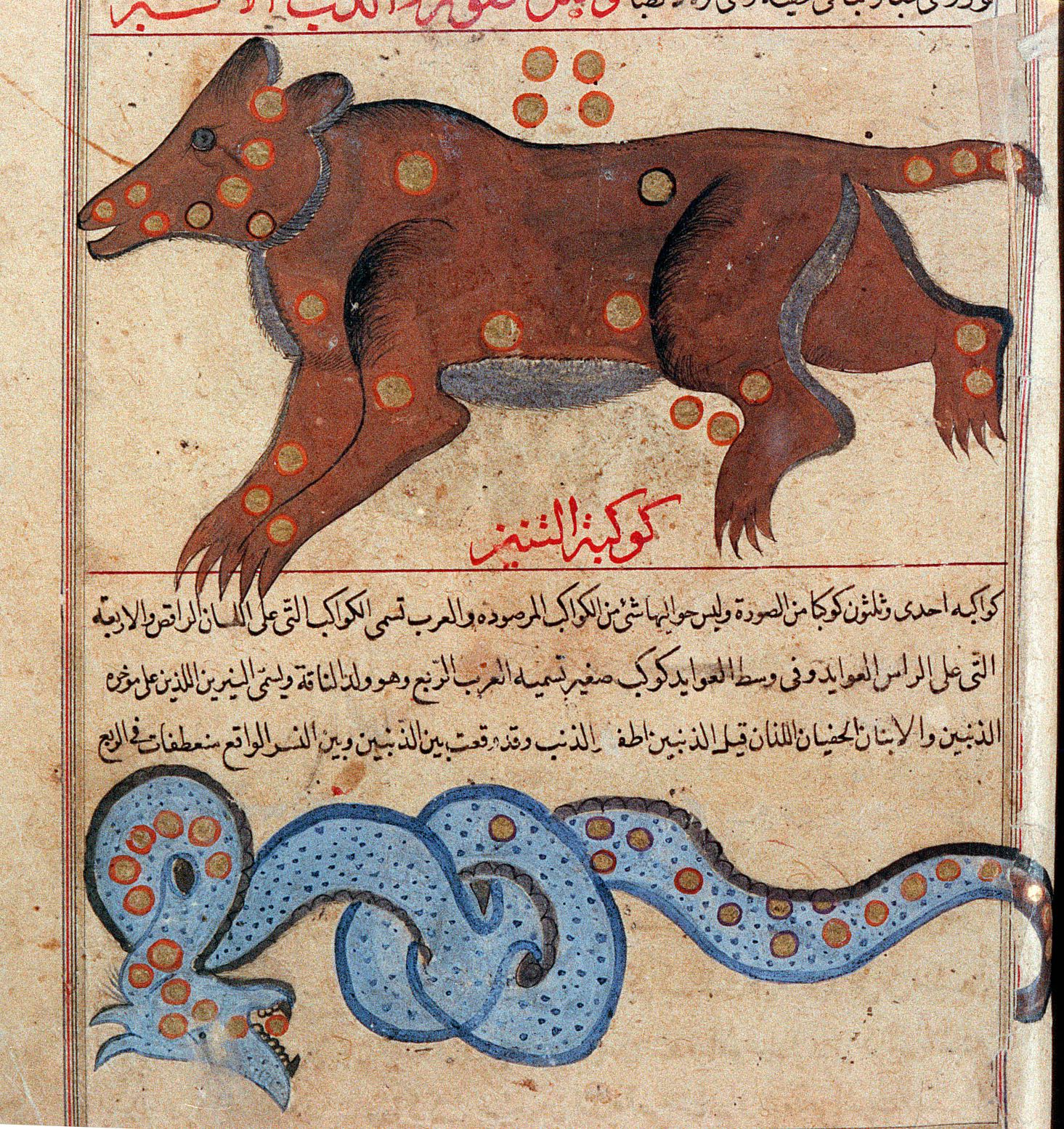 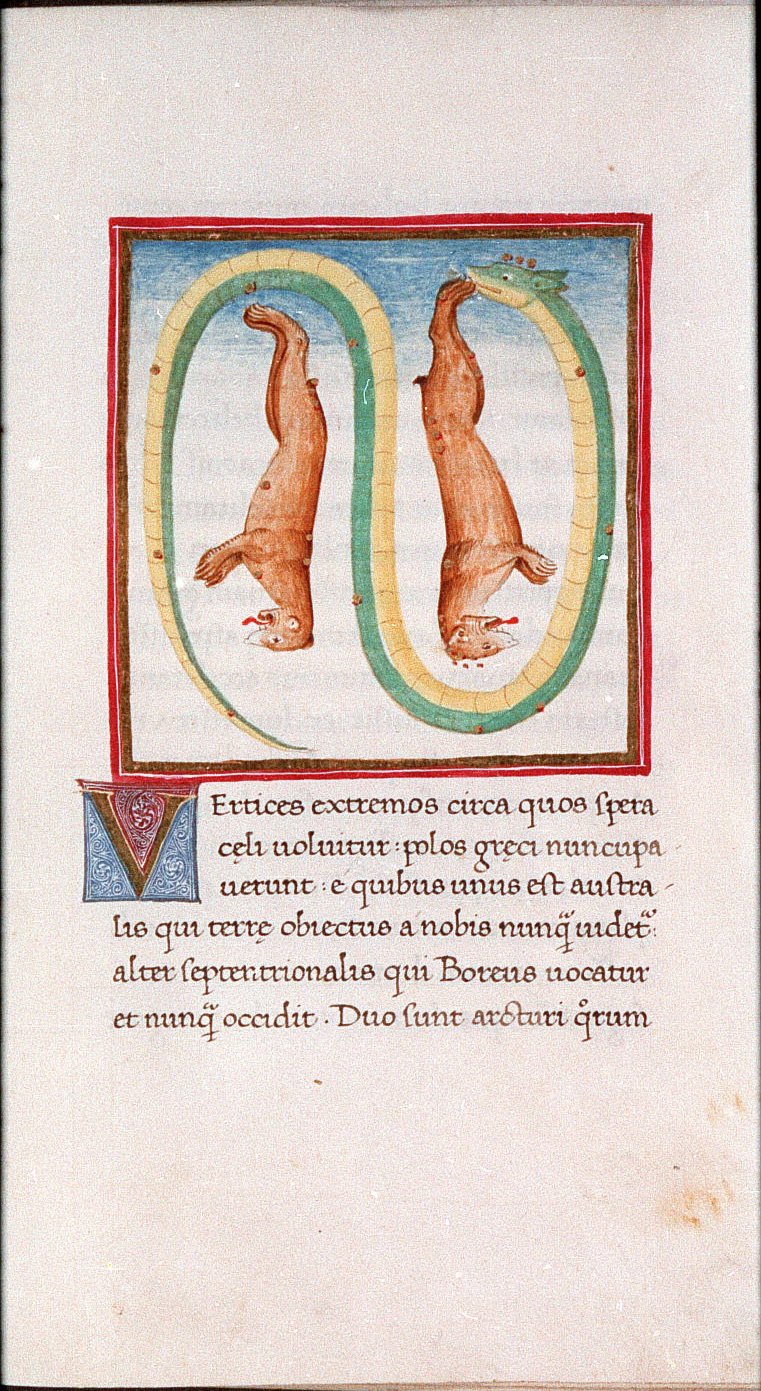 Perhaps part of a commentary on Aratus, in a 16th-century manuscript. (Schottenstift Codex 521, HMML 4268)
ABOUT THE AUTHOR: Dr. Matthew Z. Heintzelman is curator of Western European manuscripts & Special Collections at HMML.
Story Tags:
All StoriesCollectionsEditorialsSeries - The Celestial
Share:
Previous Story
Next Story