This story is part of an ongoing series of editorials in which HMML curators and catalogers share their discoveries, focusing on a theme that travels throughout HMML’s collections. Examining the theme of Medicine, Cláudia Garradas shares this story from the Malta collection.

The MUŻA—Mużew Nazzjonali tal-Arti, in Valletta, Malta—holds a small collection of prints depicting Valletta, based on the drawings of the artist Joseph Goupy (1689-1769). Goupy originally drew four panoramic views of the port of Valletta when he visited Malta early in his career. These drawings were later engraved by Antoine Benoist (1721-1770) and printed by John Boydell (1719-1804) at the end of the eighteenth century. One of Goupy’s views of Valletta stands out in light of the current COVID-19 pandemic, “A view of the City of Malta, on the side of the Lazaretto or Pest-House, where Ships perform Quarantine” (HMZA 00227).

Joseph Goupy, “A View of the City of Malta, on the side of the Lazaretto or Pest-House, where Ships perform Quarantine.” (HMZA 00227)

The Lazzaretto in Malta

The increased activity of Malta’s ports after the Aragonese conquest in 1283 led to a small island in Marsamxett Harbor, today known as Manoel Island, being established as the quarantine base for ships and people. Primitive at first, in 1521 the local Università (local council) issued an official edict that regulated ship arrivals, to protect the health of maritime travellers. This document, considered the first health regulation in Malta, included rules for ships, people, and cargoes—even specifying punishments for those that endangered the local community for violating quarantine rules. The arrival of the Knights of the Order of Saint John of Jerusalem in 1530 accelerated the activity in the harbor when they brought their navy and experience in maritime warfare and trade. Ships and vessels began to arrive from across the Mediterranean with goods and people, but also contagious diseases. Each arrival required a period of isolation to verify the safety of the crew and its cargo.

The Knights of Saint John, drawing in their Hospitaller vocation and knowledge, understood the need to protect the the densely populated urban port areas of Malta from contagious disease. All vessels had to provide a clean bill of health to be discharged, and when this did not happen, they were required to quarantine under the surveillance of two boats, day and night. As a rule, all ships and cargo had to be disinfected several times while passengers and crew were kept under observation. Heavy penalties were enacted for those breaking quarantine regulations. Knights who broke quarantine were punished severely. At the same time, hospitality was part of the quarantine experience. The Lazaretto in Malta was considered one of the best quarantine stations in Europe, providing well-kept facilities for the ships and comfortable lodging for passengers.

Joseph Goupy was born in England in 1689. In London he studied art under his uncle, the notable painter Louis Goupy (1674-1747), who had emigrated from France to join his brother. Joseph Goupy became a well-known copyist (in pastel and gouache) of old master paintings, a highly skilled designer of theater scenarios, and an excellent printmaker and renowned etcher. He was later named “Cabinet Painter” of Frederick Prince of Wales (1707-1751) in 1736. We are not sure when Goupy visited Malta, but it likely occurred during his Grand Tour of Italy between 1720 and 1725. While on the island, he drew several panoramic views of Valletta and the surrounding harbors in gouache, a technique he mastered using pale, warm, and soft colors.

Goupy’s “A view of the City of Malta, on the side of the Lazaretto or Pest-House” is a print engraved by his friend Antoine Benoist (1721-1770) based on one these original Maltese drawings now held at the Museum of Saint John in Clerkenwell, London. The date of the copper-plate engraving is not known, but it possibly was engraved by Benoist prior to 1755 when Goupy was forced to sell part of his art collection, including the copper plates, to John Boydell. John Boydell subsequently printed the engravings in London between 1768 and 1786, likely capitalizing off the recent death of Goupy in 1769 to increase the sale of the prints.

Detail. The name of Benoist is visible in the lower-right corner. (HMZA 00227)

“A view of the City of Malta, on the side of the Lazaretto or Pest-House” shows a bird’s-eye perspective of the harbor, looking southeast with a focus on the Lazaretto. One can see details smoke rising out of the Lazzaretto’s buildings, possibly from the fumigation, while the quarantined vessels under the surveillance of small boats appear near the island. Valletta appears next in line, with the walled are of Floriana dominating the entrance to the peninsula. The Three Cities (Senglea, Birgu, and Cospicua) with Fort Saint Angelo and Grand Harbor are in the background.

Antoine Benoist, a skilled French printmaker living in London, managed to reproduce these features in lines exceptionally cut into the copper plate. John Boydell’s prints were the first illustrations of Valletta published in England. Boydell’s prints proved popular and were reprinted on several occasions, including those published by Antonio Sundach in 1800, the year that Great Britain gained control over the island of Malta, which would remain a British colony until 1964. 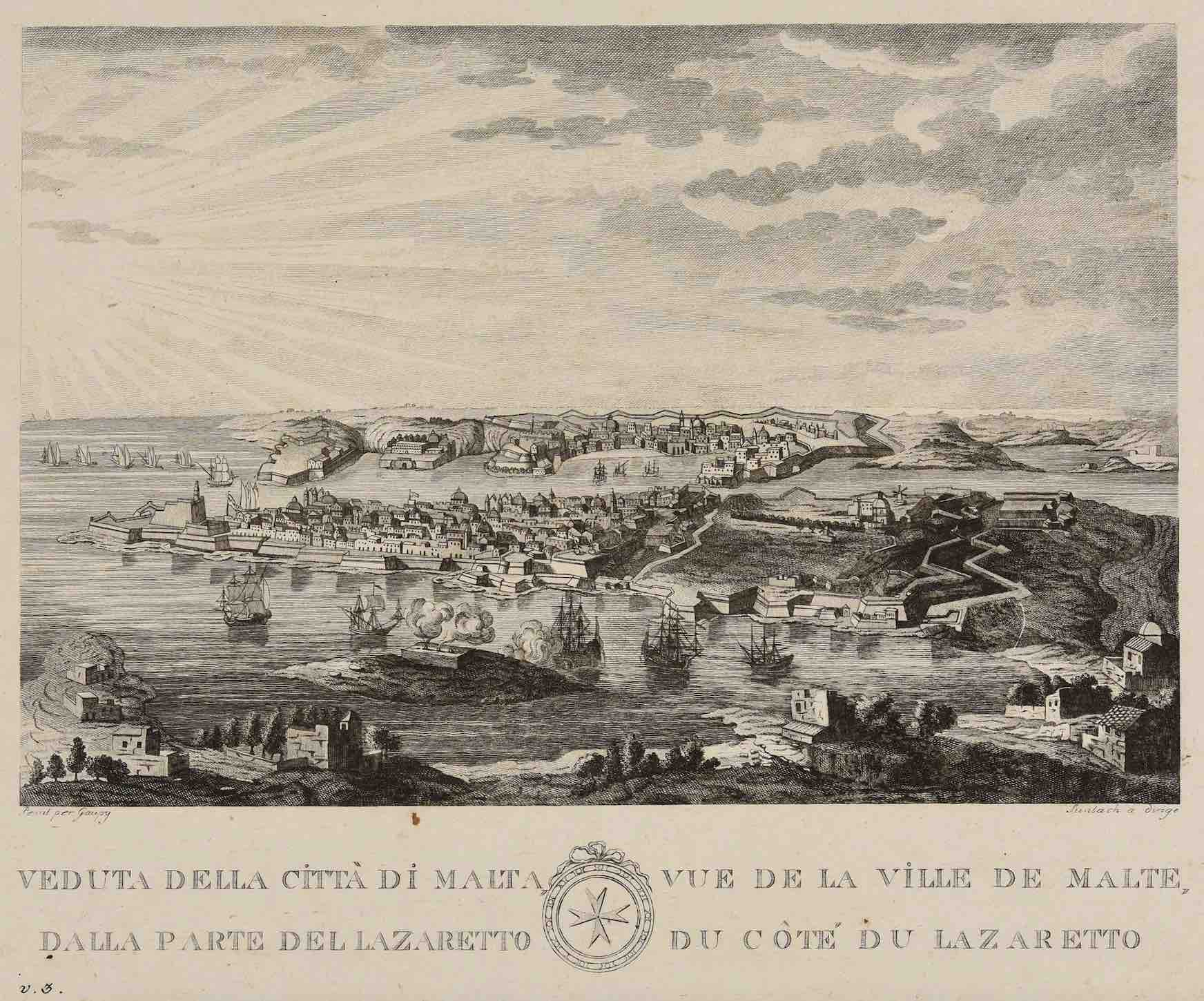