November 25, 2021
The Story of the Talking Camel and the Exploits of Ali Genre in West Africa

This story is part of an ongoing series of editorials in which HMML curators and catalogers examine how specific themes appear across HMML’s digital collections. Following a Story Time theme, Dr. Ali Diakite and Dr. Paul Naylor shares this tale from the Islamic collection. 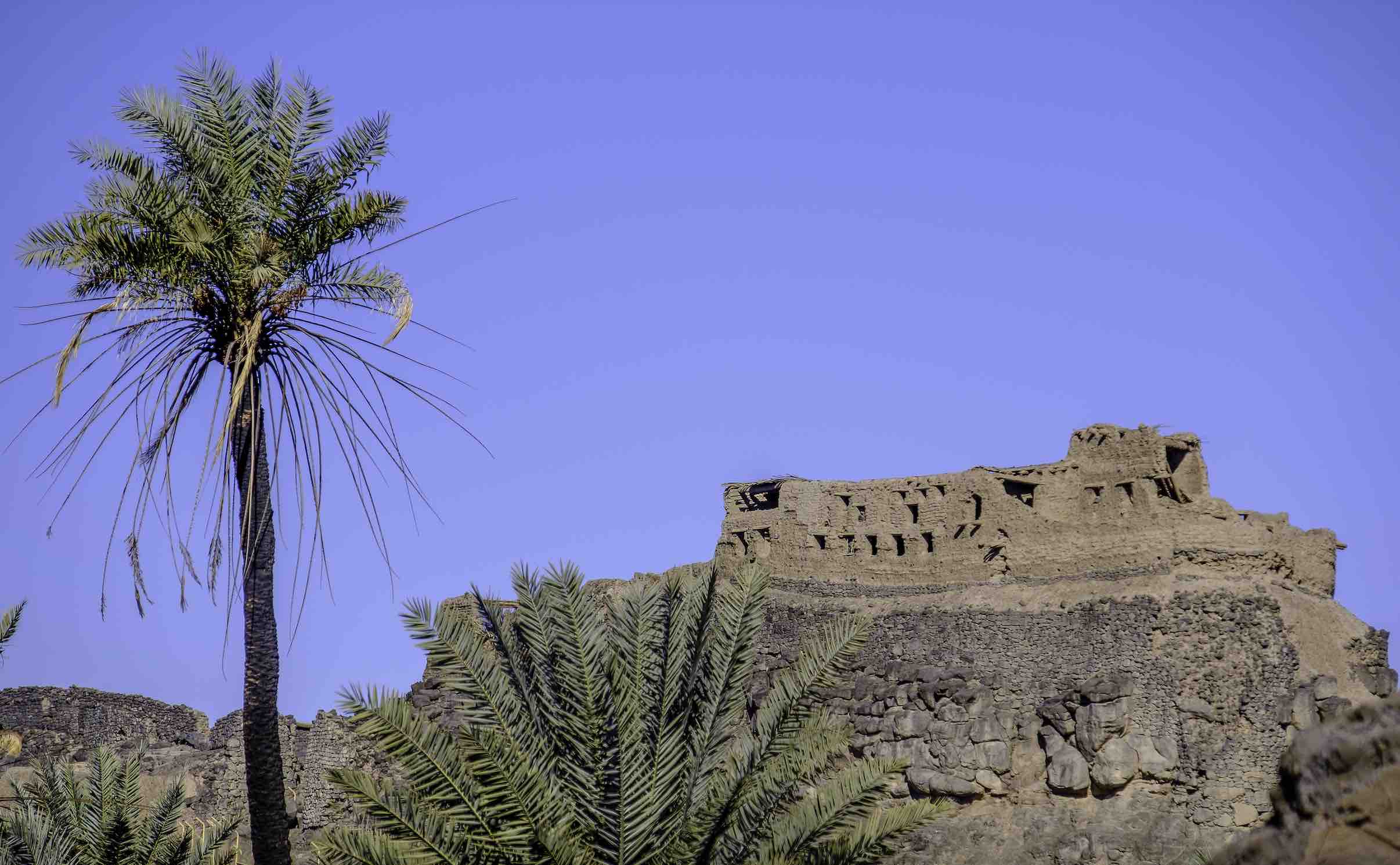 Qāmūṣ Fortress, Medina Province, Saudi Arabia, is said to be a site of the Battle of Khaybar. Photograph by Hardscarf (CC BY-SA 4.0).

For this West African edition of Storytime, we bring you an imaginative retelling of the Battle of Khaybar, featuring a talking camel! Khaybar is an oasis around 100 miles north of Medina, in present-day Saudi Arabia. In May or June of 628 CE, the early Muslims defeated the Jewish tribes who were living there at the Battle of Khaybar. Fifteen copies of this story have been identified in HMML’s collections so far. Here we offer a translation and concise summary of the story:

This is the story of the Camel of Khaybar, whom God caused to speak with an eloquent tongue. The camel was with the leader of the Jews of Khaybar, and the name of the camel’s owner was Yahya ibn al-Qasim.

When the Companions of the Messenger of God heard the words of the camel they began to weep. Umar ibn al-Khattab got up and said, “Talking camel, by the power of God Almighty, how could you know the face blessed like the moon, the master of the world, Muhammad, Messenger of God?” The camel replied, “Oh Messenger of God, I escaped from the Jews of Khaybar. The name of my owner is Yahya ibn al-Qasim. Whenever he heard me saying, ‘No god but God’ in the morning and evening, he would punish me most grievously, hitting me until I became emaciated, with nothing but bones, and almost killed me. Muhammad, I enter into the protection of God and your protection. Muhammad, protect me from my master, for he is an infidel of God.” The Prophet said, “Camel, come into my house, sit down and stay here as long as you wish. Your owner will never mistreat you after this day, by He who says ‘Be’ and it is [God].”

The camel remained in the city for eight days. When the Jews of Khaybar and the camel’s owner found that the camel had fled to the Messenger of God, they assembled a mighty army, saddled horses and made their way to Medina. The camel, the Messenger of God, and his Companions knew nothing of this. After eight days, the Jews of Khaybar and their ruler surrounded the city from every side, 200,000 horsemen in all. Each one held a fine Indian sword, each man brave and ready to meet death as if it were a daily meal, and as if their life was a regret, saying, “Oh Muhammad ibn Abd Allah ibn Abd al-Mutallib, if you do not release our camel, we will destroy your city and leave not one alive who says ‘There is no god but God and Muhammad is God’s Prophet.’”

When Muhammad heard what the Jews had to say and saw that they had surrounded the city like a plague of locusts, he said, “Jews of Khaybar, this camel is under God’s protection and mine, he is my charge. If you accept, I will give you ten gold dinars for him.” The Jews replied, “Muhammad, if the Tihama mountains were of gold and Mount Uhud was of silver, this would not satisfy us.”

As the story continues, Muhammad’s companions encourage him to give up the camel, but he refuses. They lose hope at the situation and retreat to their houses, certain that the city will be destroyed. The Jews propose that Muhammad can keep the camel in return for Abu Bakr’s tongue; Umar’s left leg; the right hand of Uthman; the head of the Prophet’s nephew, Ali ibn Abi Talib; and that Fatimah, Muhammad’s daughter, will become a housekeeper for their women. The parties all agree to this arrangement except for Ali, whose whereabouts are unknown.

Ali appears and proposes a different plan. He presents the Jews with the talking camel, dressed in all sorts of fineries, led by Bilal (another of Muhammad’s companions) and ridden by Fatimah, and they travel with the Jews to Khaybar. Ali then goes to Khaybar to take on the Jews in battle. The Jews ridicule his demand to fight, but they accept. Ali is joined by the angel Gabriel and a thousand angels, and he slays 70,000 men in one swoop of his sword, four fields in length. He returns to Medina in triumph with Bilal, Fatimah, and the talking camel. 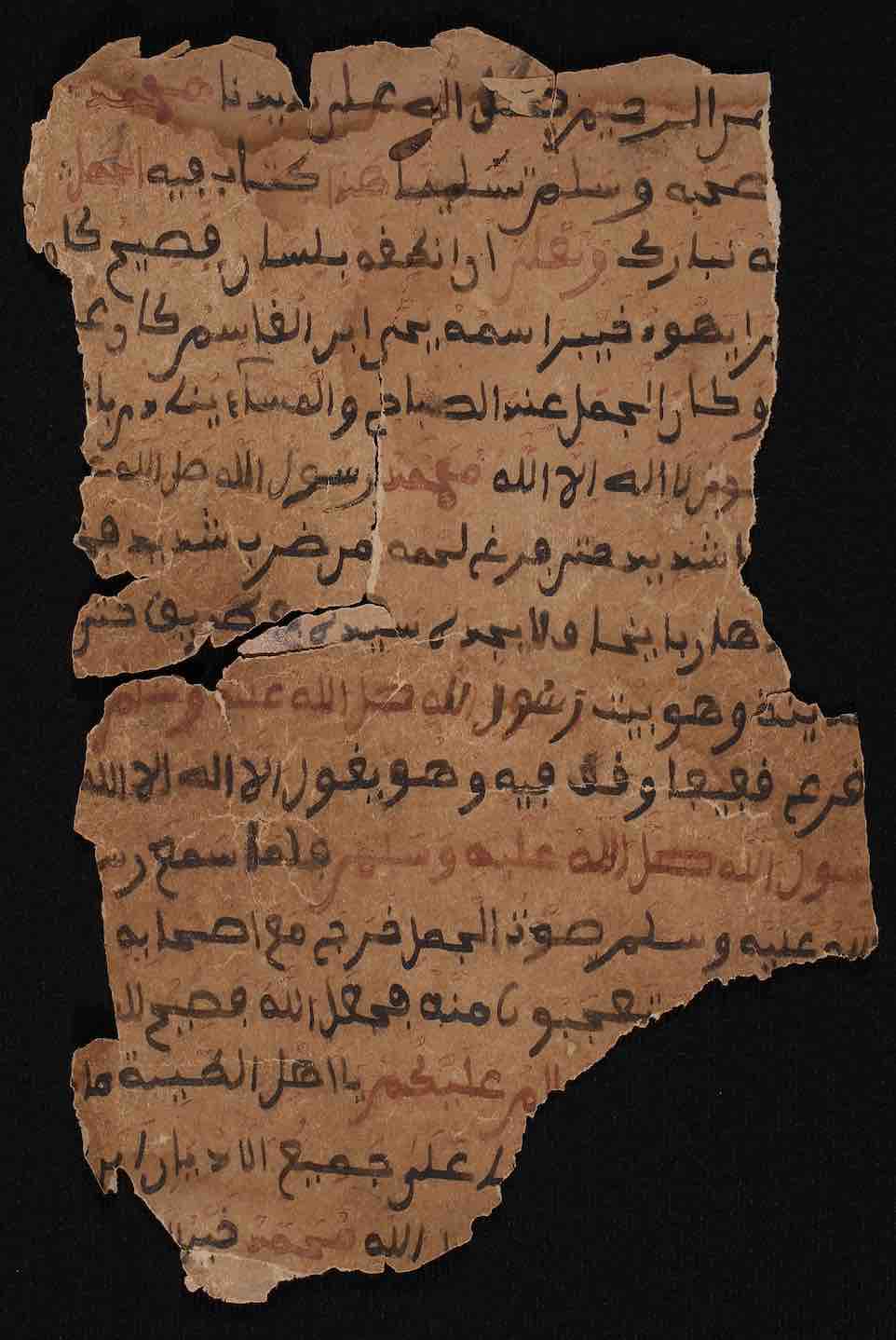 The first page of the Story of the talking camel who fled from Khaybar to Medina. This is one of fifteen copies of the story currently available in Reading Room. (SAV ABS 03666)

While some elements of the story are fiction, others are clearly inspired by real events in Khaybar. Ali ibn Abi Talib did feature prominently in the battle. However, it was Muhammad and the early Muslims who went to Khaybar to confront the Jewish population living there, not the other way around. While the Muslims were camped at Khaybar, Ali was not present during the discussion of battle plans, prompting Muhammad to ask where he was—similar to the story of the camel. According to the hadith, Ali had remained in his tent, complaining of a problem with his eyes. Muhammad cured him and awarded him a flag to lead the battle.

The talking camel adventure is part of the “exploits of Ali” genre found in Muslim West African storytelling. Like other stories of epic heroes, the genre highlights Ali’s strength, bravery, and cunning in the face of danger. Ali is also present in other aspects of popular culture. For example, in many parts of West Africa, the Orion constellation represents Ali with his sword, Zhulfiqar, at the battle of Badr. We do not know why Ali in particular is celebrated in this way, but maybe this entertaining story will encourage others to explore the question.