From Cairo to Mardin, Manuscripts on Camelback

June 24, 2021
From Cairo to Mardin, Manuscripts on Camelback

This story is part of an ongoing series of editorials in which HMML curators and catalogers examine how specific themes appear across HMML’s digital collections. From the Eastern Christian collection, Dr. Vevian Zaki shares a story about Travel.

In the very bottom margin of pages 495-496, in manuscript CFMM 00312, an anonymous person left an intriguing note. The note, appearing in a haphazard mixture of horizontal and vertical lines, begins with a long praise of God, then continues as follows:

“This noble book was bequeathed to the most despised among God’s servants and the neediest of His mercy and acceptance, the poor servant [name erased]. It became his property and in his possession. Therefore, it is hoped that whoever reads it [will pray for the] forgiveness of his sins and ask for mercy for him from the Bestower of mercy. And that he ask for mercy for his brother Yūḥannā and his father who carried this noble book [from] Cairo to the protected city of Mardin with other holy books, amounting to two camel loads [ḥimlayn jimāl]. Whoever requests mercy for them from the almighty God, may the Lord forgive all his sins in His mercy. Amen, o Lord of the worlds!” 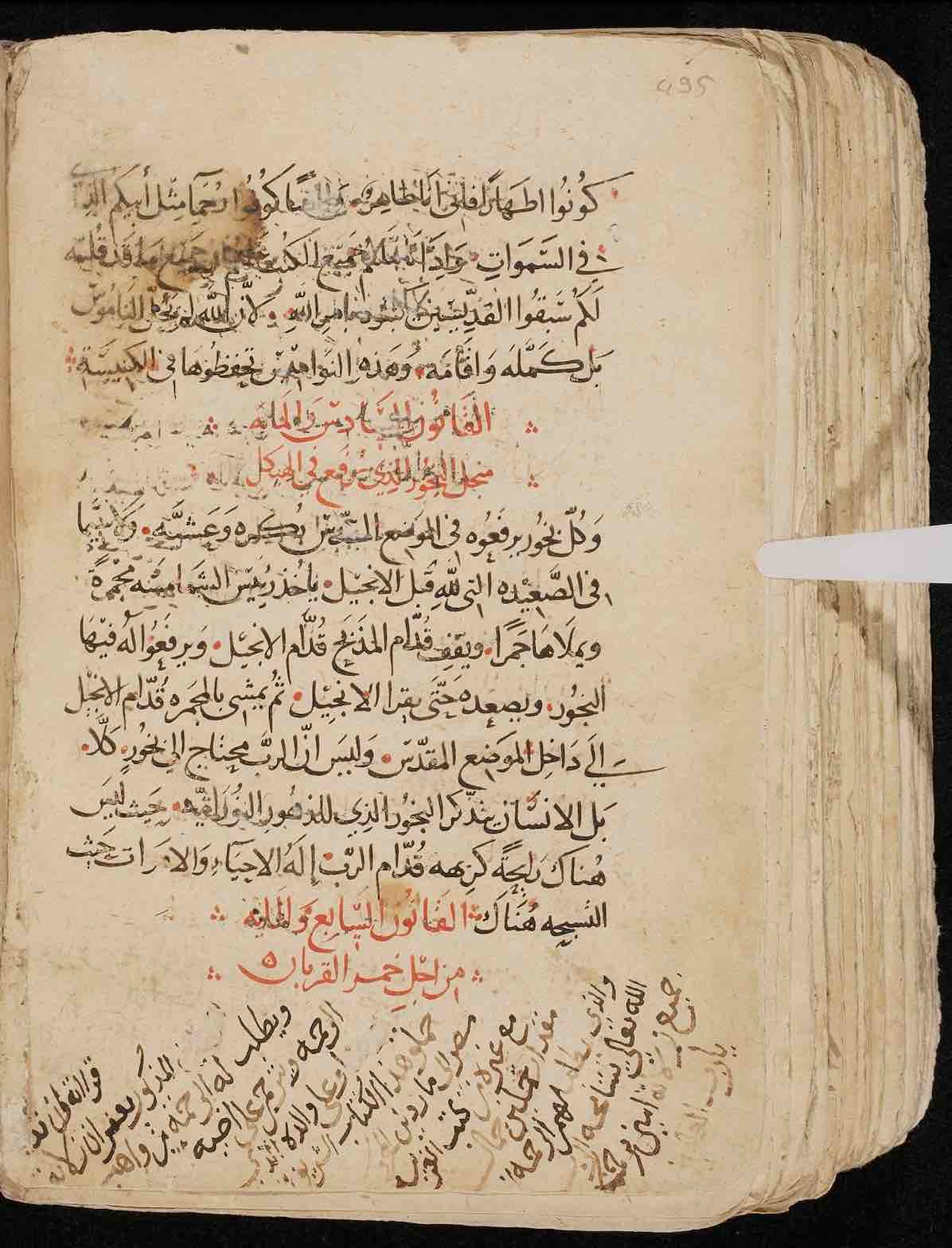 Part of the anonymous note that mentions two camel loads of manuscripts traveling from Egypt to Mardin. (CFMM 00312, page 495)

This note is the sole testament to the manuscript’s remarkable journey from Egypt to Mardin, a city in present-day Turkey. We also gather that CFMM 00312 was part of a larger transfer of manuscripts consisting of “holy books,” as the note’s author puts it. Given that the manuscript contains an Arabic translation of the Apostolic canons and the Didascalia apostolorum, a Christian treatise, it’s probable that the rest of the books carried on this journey were also Christian theological or liturgical works.

The expression ḥimlayn jimāl, however, is obscure. If taken literally, it could mean a load requiring two caravans’ worth of camels. But this would be an enormous cargo, and seems highly unlikely. Perhaps a more likely interpretation would be the load carried by two camels—still a significant delivery of manuscripts!

Such a curious note naturally sparks many questions: was this cargo of manuscripts part of a larger commercial enterprise? Did Yūḥannā, the brother of the note’s author, and their father, import manuscripts to sell in Mardin? Or were they simply collectors whose predilection for Coptic manuscripts caused them to transport a significant load of them at once? There is no definite answer, but evidently some manuscripts were passed down through the family, as is the case with the author of the note in CFMM 00312.

Yet the journey of this manuscript did not end in its possession by this anonymous person: the travel continued, albeit in a local, rather than international, context.

On page 497, a waqf note (endowment note) and seals inform the reader that the manuscript moved to the collection of a Syriac Orthodox monastery in Mardin, Dayr al-Zaʻfarān (Saffron Monastery). The waqf note is written by Tīmūthāwus ʻĪsá, Metropolitan of Mardin (active 1718–1743 CE), and is confirmed later by the Syrian Orthodox Patriarch Jawarjiyūs III (active 1745–1768 CE). In this note, Metropolitan Tīmūthāwus requests that readers ask for mercy for the late owner of the manuscript, Patriarch Jawarjiyūs II (active 1686–1709 CE), and for his nephew the Patriarch Isḥaq al-Mawṣilī (active 1709–1722 CE).

It could be conjectured, then, that the manuscript somehow came into the possession of Jawarjiyūs II, and that he bequeathed it to his nephew Isḥāq. Later, it reached the hands of Metropolitan Tīmūthāwus, who was likely acquainted with the two patriarchs, as he went on to write biographies of them in 1730 CE. At some point, the journey of the manuscript brought it to the Church of the Forty Martyrs in the same city, where it was digitized in the year 2007.

While the manuscript itself does not specify a date or place of copying, it is evident that it was a product of the Coptic Church. The book’s Didascalia apostolorum was copied from another manuscript that was owned by the Coptic bishop of Milig (Egypt), Buṭrus al-Jamīl (active 14th century). However, there are no clear traces of the manuscript CFMM 00312 being used in Egypt. On the contrary, all the signs of use bear the prints of Mardin.

In addition to the above-mentioned notes, the manuscript contains several waqf notes to the monastery of al-Zaʻfarān that are written in the Garshuni script. Moreover, a pastedown comprised of modern paper at the rear end of the manuscript is full of pen trials in Garshuni, which is much more in keeping with scribal practices in Mardin than in Egypt. This poses another possibility that the manuscript was specifically copied for Yūḥannā and his father, and that they were therefore its first owners.

CFMM 00312 was not the only Egyptian manuscript that travelled to Mardin. Other manuscripts found their way to the same collection, at the Church of the Forty Martyrs, although their route of travel is not as clear. For example, the Comprehensive book on divine mysteries (CFMM 00385). This manuscript was copied in the Egyptian city of Asyūt and probably had a Coptic owner (see front flyleaves). It also bears several notes from Mardin, and a waqf note by—once again—the Patriarch Jawarjiyūs III (see fol. 98v, 198v, 295v), leading us to wonder whether this manuscript was part of the same camels’ cargo containing CFMM 00312.

Manuscripts, like people, move all the time. They travel domestically and internationally through usual and unexpected routes. In their mobility, they bear prints that invite us to read, understand, and follow their journeys. 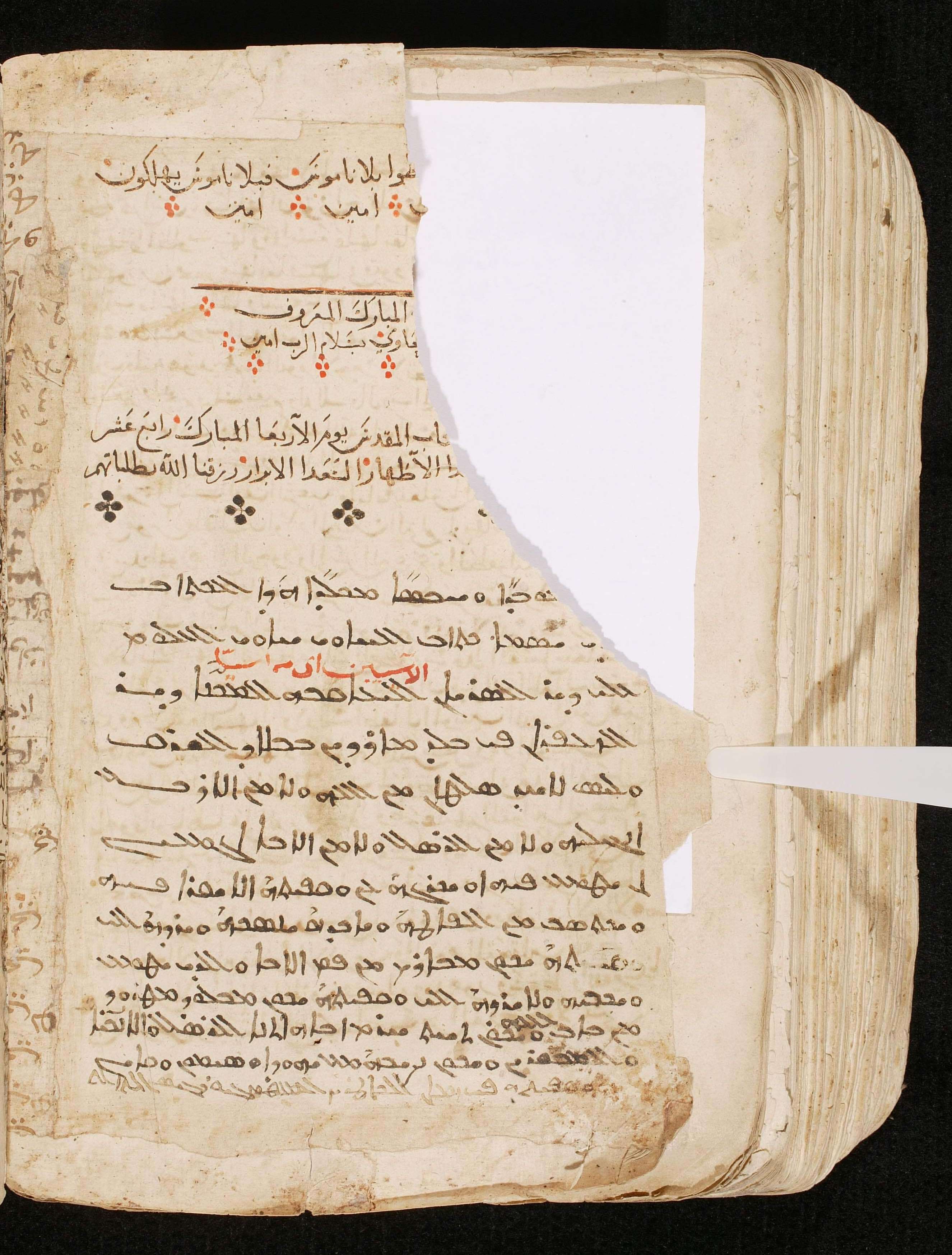 Part of the colophon of CFMM 00385, using the Coptic Calendar and containing a waqf note of the patriarch Jawarjiyūs III (CFMM 00385, fol. 295v) 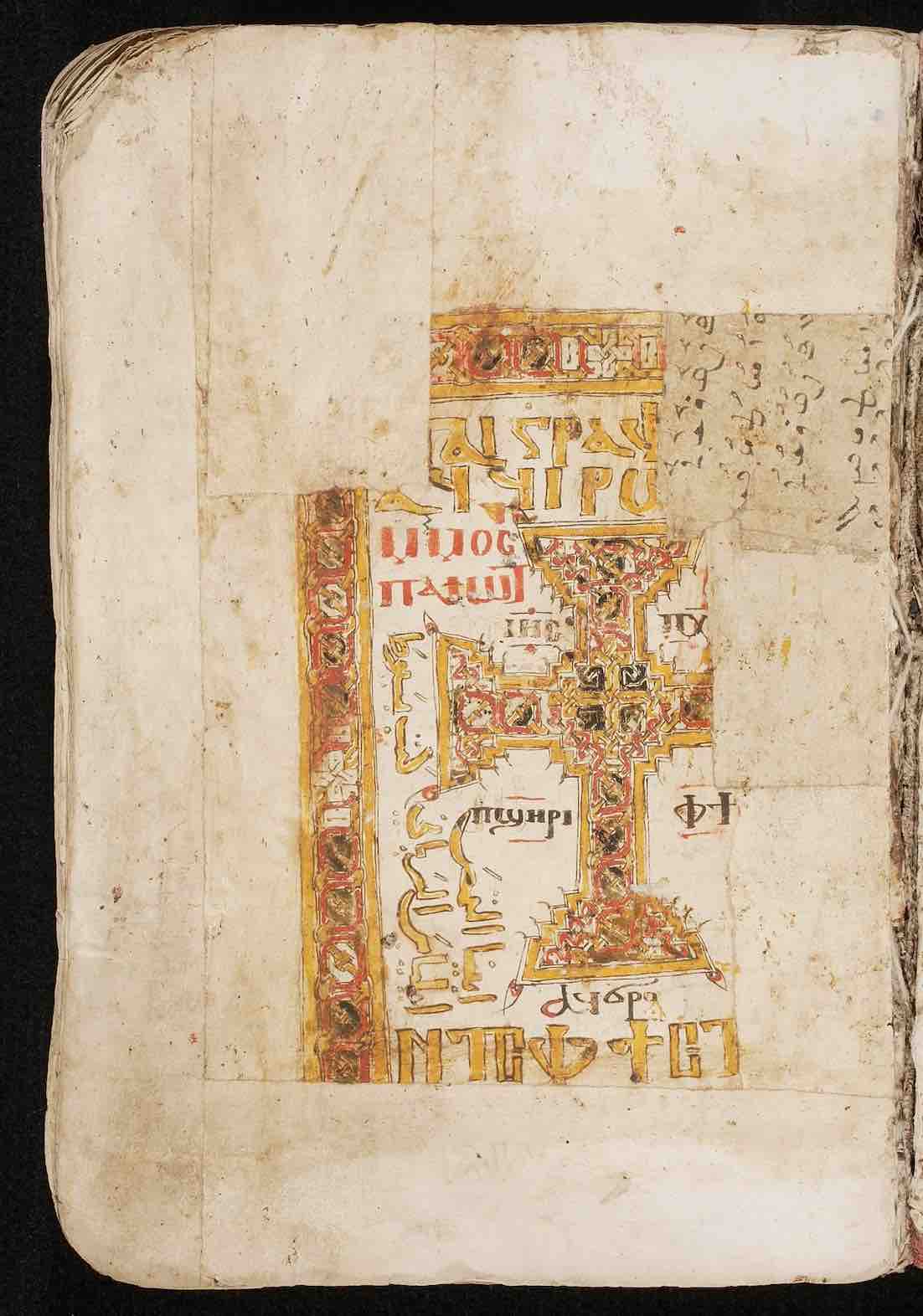 Coptic cross with scattered Coptic words. Identified in Arabic is the place where the manuscript was copied and the name of a person who seems to be an owner of the manuscript. Syriac letters also appear on a repair patch (CFMM 00385, front flyleaf)
ABOUT THE AUTHOR: Dr. Vevian Zaki is cataloger of Arabic manuscripts at HMML.
Story Tags:
All StoriesCollectionsEditorialsSeries - Travel
Share:
Previous Story
Next Story