The Journey of One Armenian Manuscript

August 5, 2021
The Journey of One Armenian Manuscript

This story is part of an ongoing series of editorials in which HMML curators and catalogers examine how specific themes appear across HMML’s digital collections. From the Eastern Christian collection, Malina Zakian shares a story about Travel.

In 1945, a pharmacist living in Lebanon—Manaseh Kaprielian—presented a 17th-century Armenian manuscript to the Armenian Catholicosate of Cilicia in Antelias, Lebanon. The manuscript, MS 60, contains a sermonary by the 14th-century theologian Grigor Tat‘ewats‘i. Inserted among the sermons is a concise geography of locations in Armenia, the Caucasus, Iran, and the Mediterranean by the 13th-century historian and translator Vardan Areweltsʻi. Kaprielian’s donation is memorialized by an inscription on the inside front board of the volume, dated May 20, 1945. 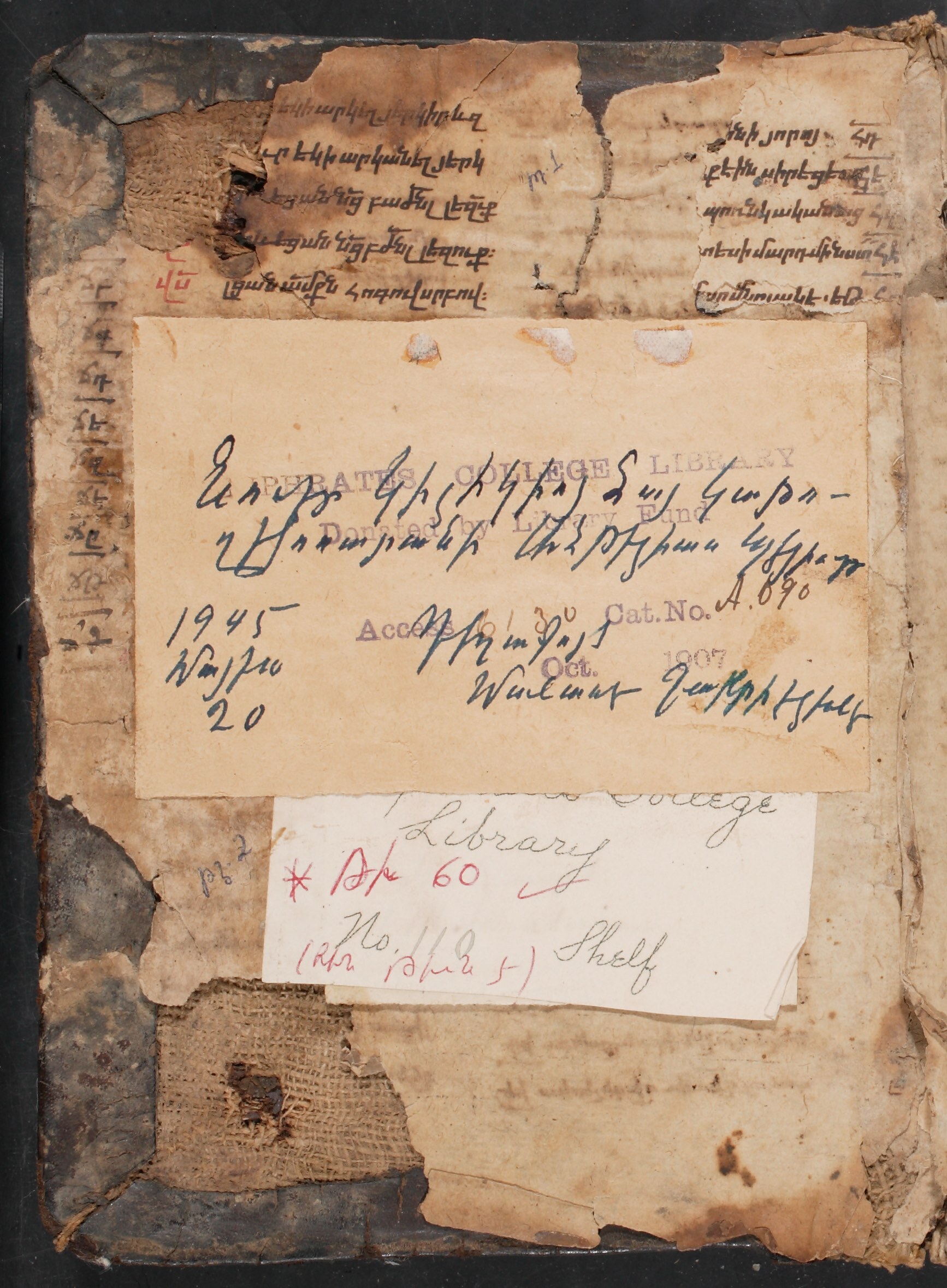 How did a 17th-century manuscript come into the hands of a pharmacist in the 20th-century? Charting the route of this book through the centuries can be labyrinthine and convoluted. Traces of its journey are inscribed in the object itself, revealing a history that traversed religious and geographic boundaries.

Traditionally, much of the information concerning the point of origin of any manuscript, including the date and location of its copying, is related in the scribal colophon. The colophon of MS 60 (folio 200r) offers little more than the name of the person who commissioned its creation, Hovhannēs vardapet (archimandrite) of Constantinople, and the name of the scribe, Hohan Lehts‘i.

But even a colophon with scant information can tell a story. Although any identification would be speculative, it is very possible that the Hovhannēs vardapet of Constantinople mentioned in the colophon is Hovhannēs vardapet III (1554–1634), known as Khul (the Deaf), who was the Armenian Patriarch of Constantinople in the early 17th century. He had Catholic leanings and spent time in the Armenian Catholic center of Lvov, Poland. While in Lvov, there’s evidence he had a copy made of the Historical Compilation by Vardan Arewelts‘i, the same author of MS 60’s Geography. That the scribe of MS 60 calls himself Hohan Lehts‘i—John of Poland—further makes a connection between MS 60 and the Armenian community of Poland. While it is uncertain whether the manuscript was copied for Hovhannēs vardapet while in Lvov, or whether he commissioned it while in Constantinople, the names of the colophon speak to the movement of people and materials between Anatolia and Europe.

Further evidence of the book’s travels is marked on the pages in the form of ownership seals and inscriptions. Flyleaf notes suggest a certain back and forth between 18th-century clerics who left messages for each other in exchange of the volume. The Armenian ecclesiastic Hagop vardapet impressed seals in multiple locations; the seals bear his monogram in Armenian letters on either side of a bishop’s crosier and are dated 1809 and 1810. 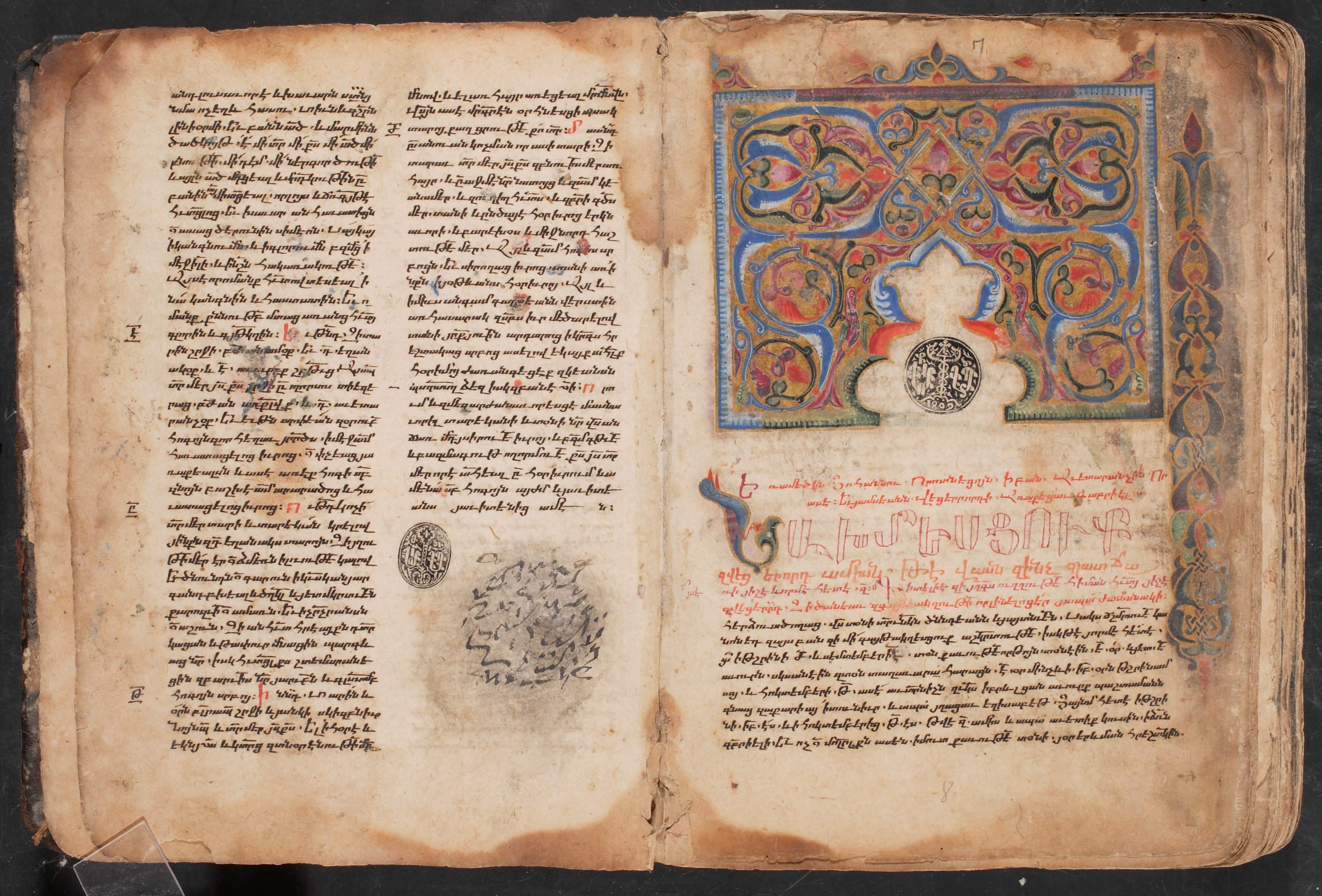 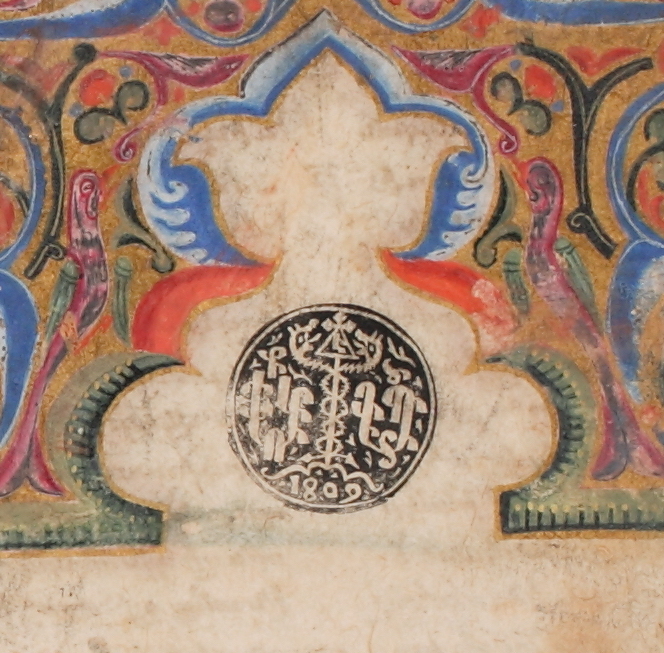 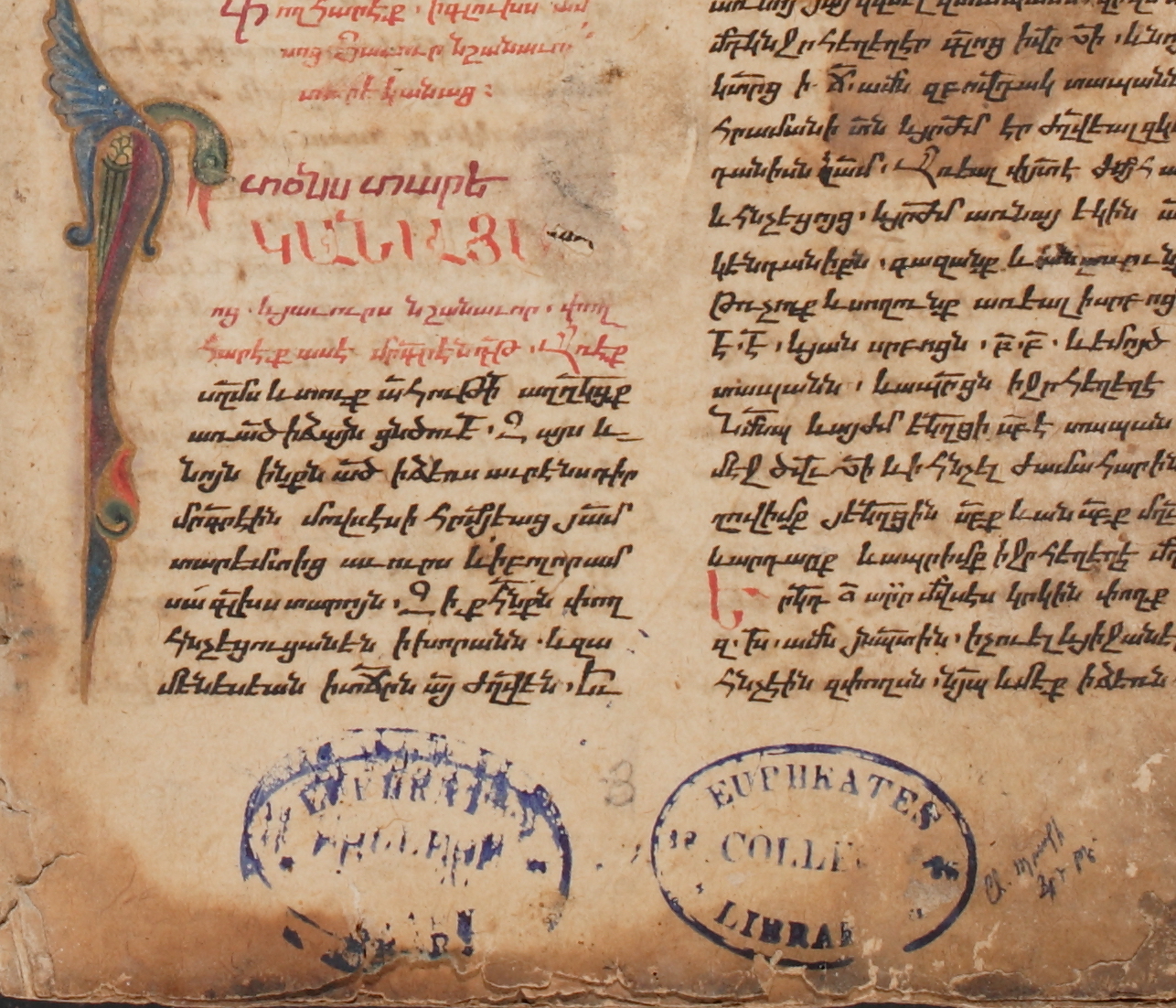 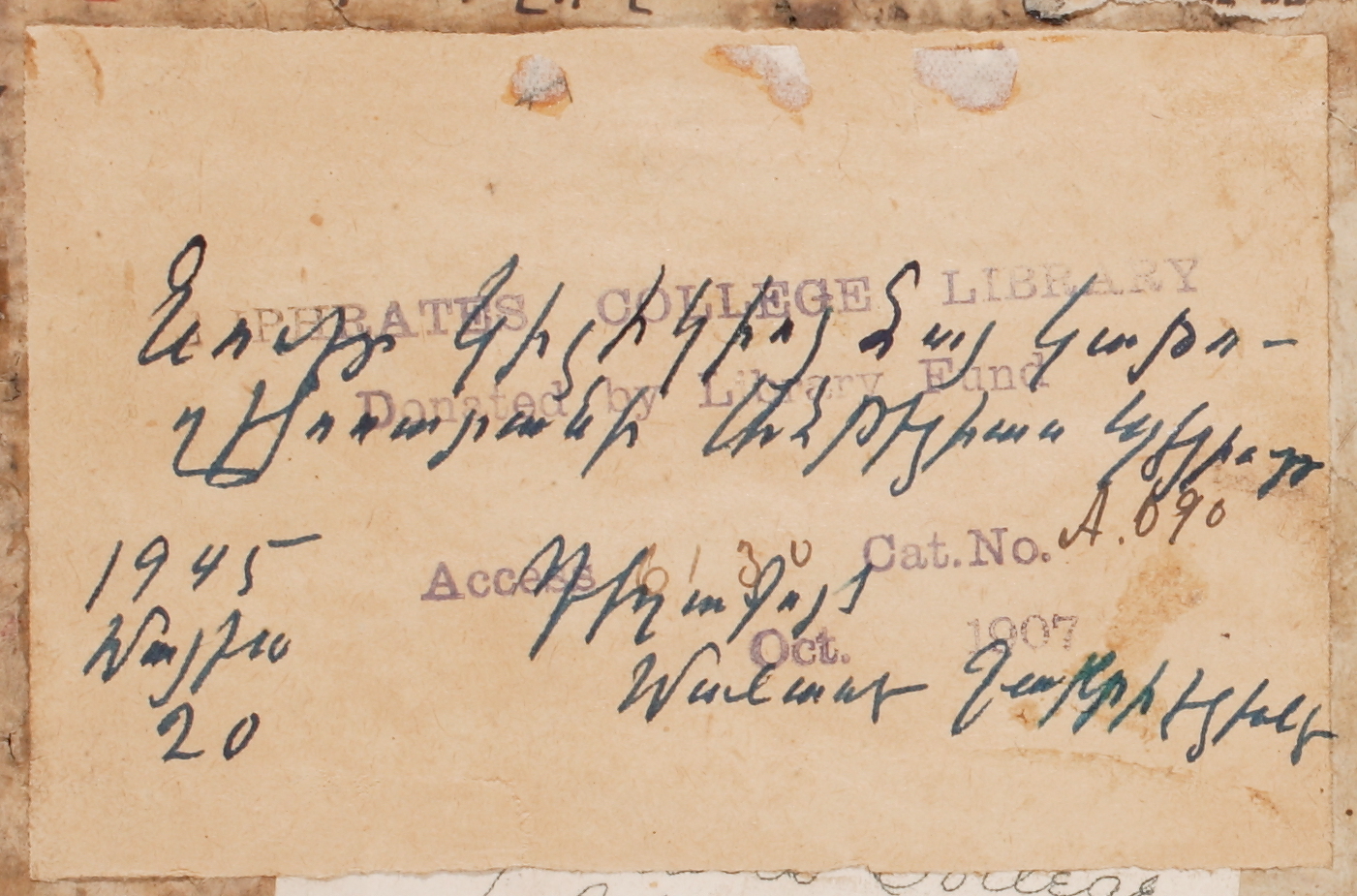 Detail of printed bookplate from the Euphrates College Library. (MS 60, front board pastedown)

These stamps—along with a printed bookplate from the Euphrates College Library, dated October 1907, upon which Kaprielian’s dedication is inscribed—bring the journey of this manuscript to the modern era and to Eastern Anatolia.

Established by the American Board of Commissioners for Foreign Missions (ABCFM) and incorporated in Massachusetts in 1878, Euphrates College was a complex of schools encompassing kindergarten through college and located in the city of Harput (modern-day Elazığ, Turkey). The Protestant-run schools offered a modernized education for the local population of the province; the schools enrolled both women and men and offered a range of classes, mainly in the Armenian vernacular language. The Euphrates College library was said to number 8,000 books, most of which were in Armenian, including MS 60.

In 1895, the college buildings and theological library were looted and burned during the Hamidian massacres. Twenty years later, during the Armenian genocide, the Ottoman military occupied the college for the duration of World War I. The college was closed shortly after the establishment of the Turkish Republic in 1923. From this chaos and devastation, MS 60 survived.

It is unclear how the manuscript originally came to Euphrates College, or how or when it made the 800-kilometer journey from the college’s library in Turkey to Lebanon. Manaseh Kaprielian sheds some light on the most recent stages of its voyage in a testimony that is part of the USC Shoah Foundation Visual History Archive. His account is related by Dr. Mehmet Polatel, a researcher who has worked with the stories of genocide survivors from the province of Harput.

Kaprielian was born in 1893 in the Hoghe village of Harput. He attended Euphrates College in its final days, and after the dissolution of the school, he assisted in relief efforts at a local orphanage. He moved to Aleppo, Syria, at the end of the war and one year later, in 1923, settled in Beirut, Lebanon, where he served as a pharmacist for more than 40 years.

We may conjecture that the manuscript came into Kaprielian’s possession through his connection to Euphrates College, possibly at the time of the College’s dissolution. In addition to MS 60, Kaprielian rescued two other manuscripts in this same collection, MS 61 and MS 119, both of which bear the Euphrates College stamp and Kaprielian’s dedicatory note. Through the efforts of Kaprielian and others, MS 60 reached its current home in the Library of the Catholicosate of Cilicia. The journey of this manuscript, however, has not ended. Through HMML’s work, MS 60 now travels across virtual space in its new digitized form.

ABOUT THE AUTHOR: Malina Zakian is cataloger of Armenian manuscripts at HMML.
Story Tags:
All StoriesCollectionsEditorialsSeries - Travel
Share:
Previous Story
Next Story