Traveling to France on Paper

This story is part of an ongoing series of editorials in which HMML curators and catalogers examine how specific themes appear across HMML’s digital collections. From the Art & Photographs collection, Katherine Goertz shares a story about Travel. 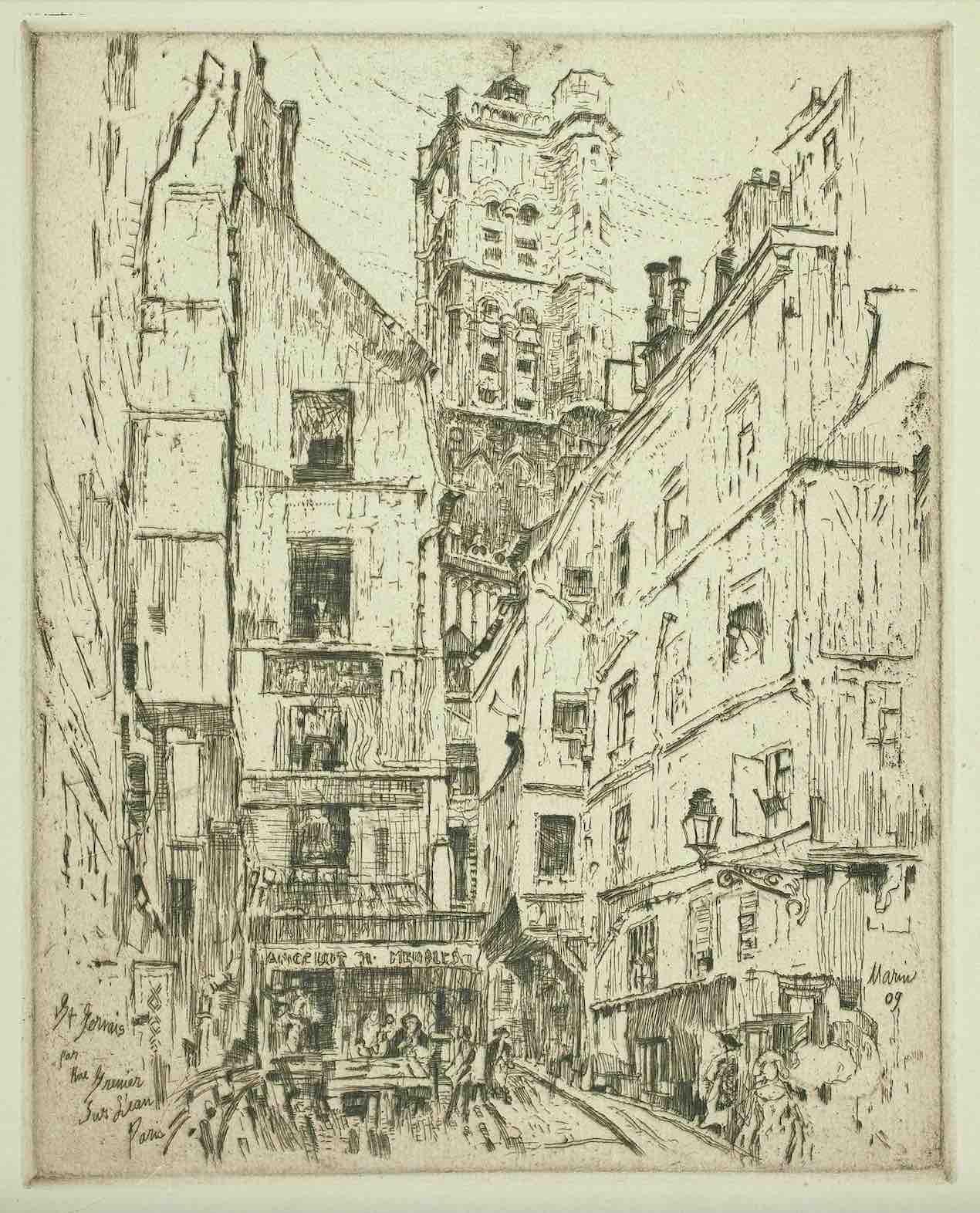 In the mid-19th century, a group of French artists began to reevaluate the art of etching. Long overshadowed by the precision offered by engraving and lithography, etching began to be embraced again for its expressive qualities and its reliance on the artist’s technique. By the 1860s, artists had formed a full-scale movement, the Etching Revival, aimed at reinvigorating the art. Artists like Charles Meryon, Maxime Lalanne, Alphonse Legros, and Auguste Lepère relied on etching’s feathery and sketchy qualities to produce atmospheric images of landscapes, village scenes, and architecture.

In the late 19th and early 20th century, the Etching Revival reached other countries and a second generation of artists took the show on the road. Mostly British or American, they traveled continental Europe portraying scenes of villages and towns, cathedrals and palaces. France, long a destination of choice for artists, was often on the itinerary, and its Gothic architecture and crowded market streets—as well as its natural landscapes—provided plenty of fodder for the etcher’s eye. 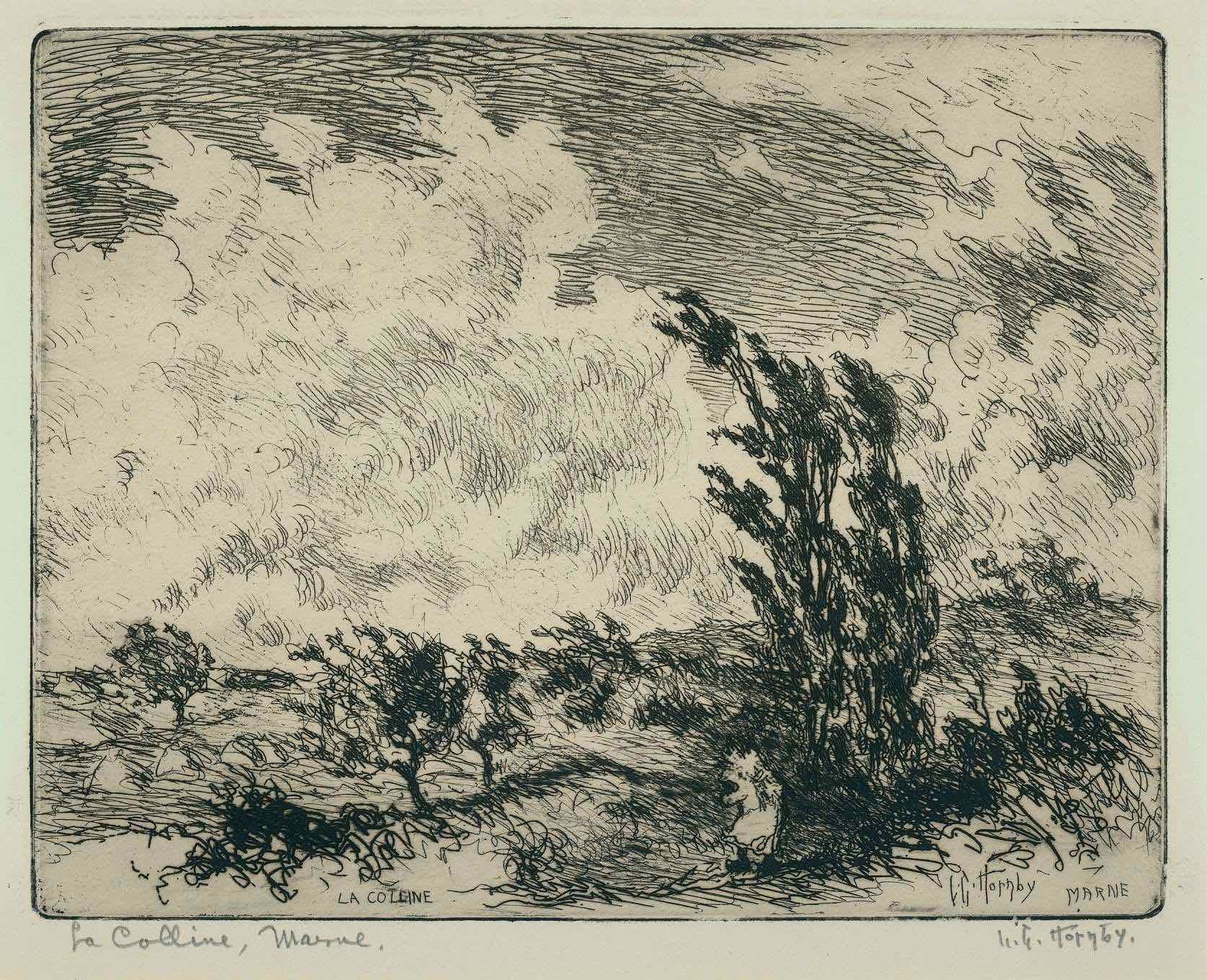 American artist Lester Hornby created La Colline, Marne in France in 1913 (AAP0978). The soft qualities that made etching so attractive to those earlier artists are on full display in this depiction of a cloudy sky and a windswept hill in Northern France. More restrained and with a more controlled line, is Canadian-American Kerr Eby’s Pauldavid (1927), a depiction of Brittany’s commune of Pouldavid-sur-Mer, looking across a glowing stretch of water.

Architecture was a constant interest for this school of etchers. One of the most influential and prolific was the American John Taylor Arms, who created dozens of depictions of French churches. A close look at works like Louviers Lace (1936) shows the virtuosity and complexity of his etching where shadows and textures are seamlessly created using networks and patterns of minute lines.

While there is no dearth of picturesque monuments available for the artist, the impressiveness of certain famous places meant that artists sometimes portrayed the same subject. John Taylor Arms and fellow American Samuel Chamberlain share a focus on fine, minute detail in envisioning the overwhelmingly proportioned flamboyant Gothic tower of the Church of St. Mary Magdalene in Verneuil-sur-Avre. In Aspiration (1939), Arms chose to portray the church head-on, with its massive tower raising above the clouds. Chamberlain’s Verneuil (1929) brings the church down to earth, putting it in context among shadowy town streets. 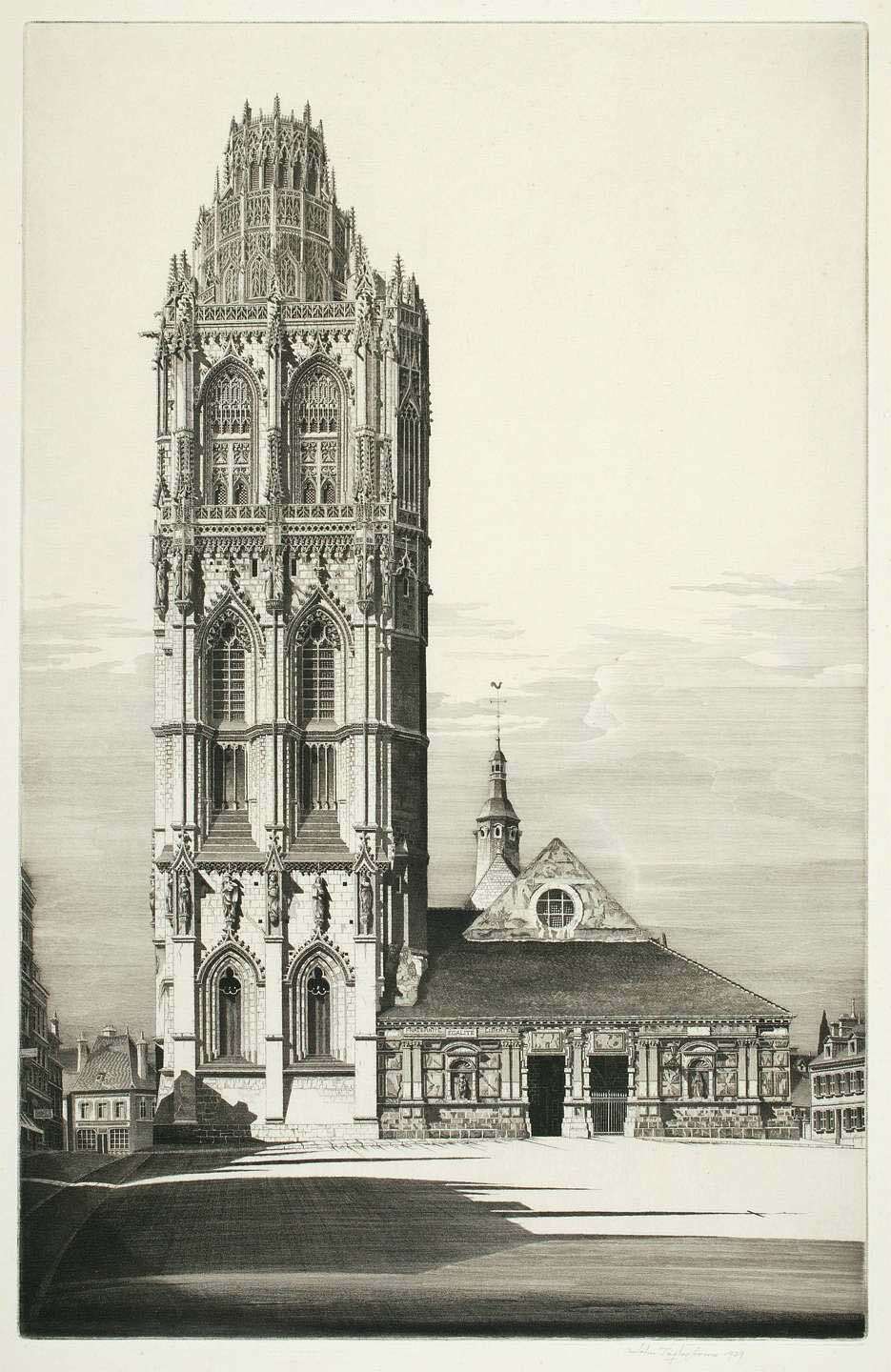 An even greater contrast is seen between Arms’ Le Puy (1928) and Joseph Pennell’s Le Puy-de-Velay (ca. 1890). While Arms’ work is done in his characteristic carefully detailed style, Pennell depicts the mountaintop churches of Le Puy using a freer technique that makes full use of the soft effect that etching offers. 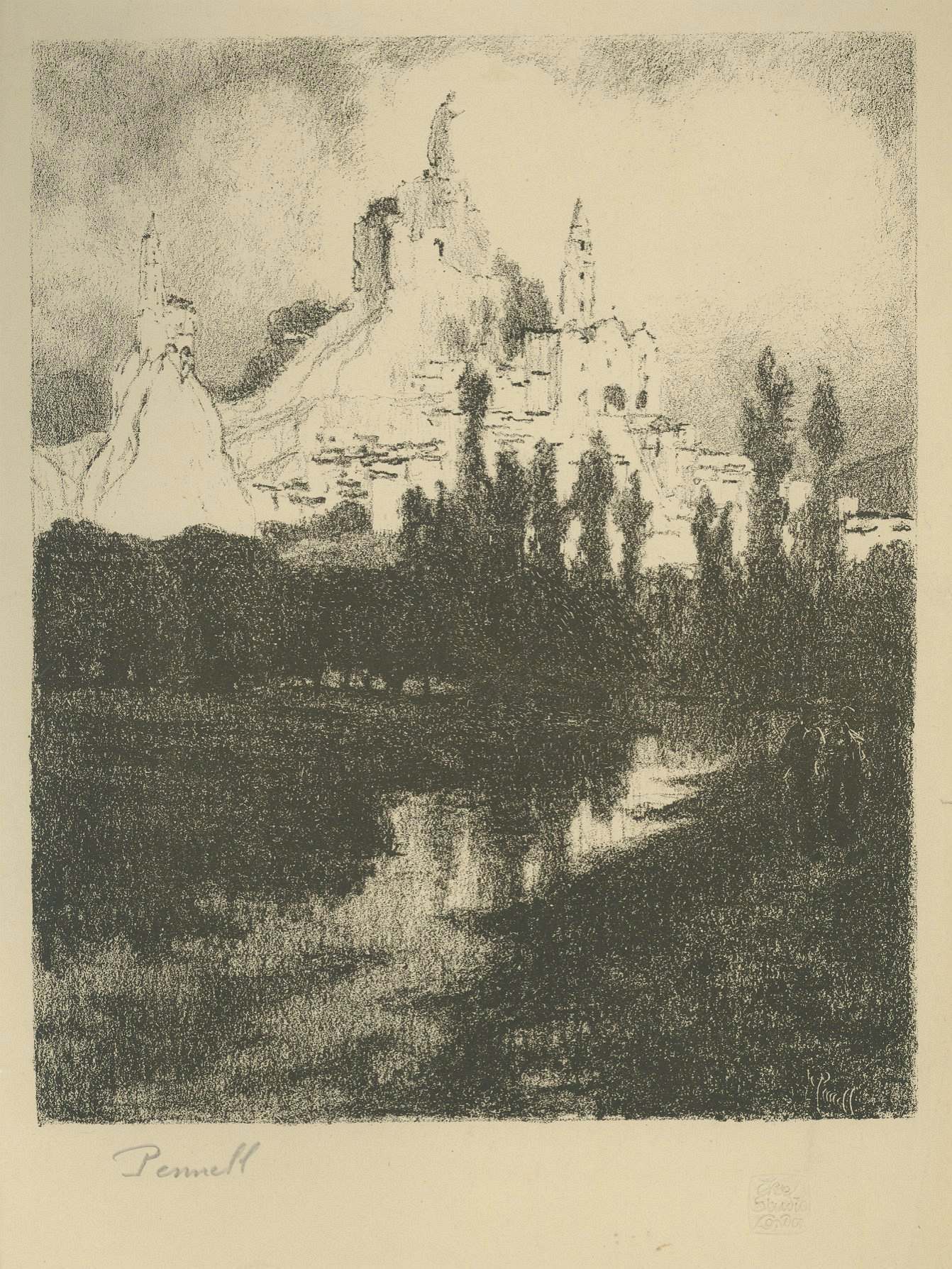 Chamberlain’s Auxerre (ca. 1920) offers a glimpse onto a French village square, the Place de le Saint Nicolas with its famous St. Nicholas fountain. Another easily identifiable French street, this one in Paris, appears in John Marin’s St. Gervais, Rue Grenier sur L'Eau, Paris (1909), where the Church of St. Gervais peeks out from among a dense cluster of buildings. In Place de l'Hotel de Ville, Troyes (1923), English artist Hedley Fitton offers a shoe shop, a charcuterie, a corset seller, and an opticians, all dwarfed by the ornate Church of Saint-Jean-au-Marché. 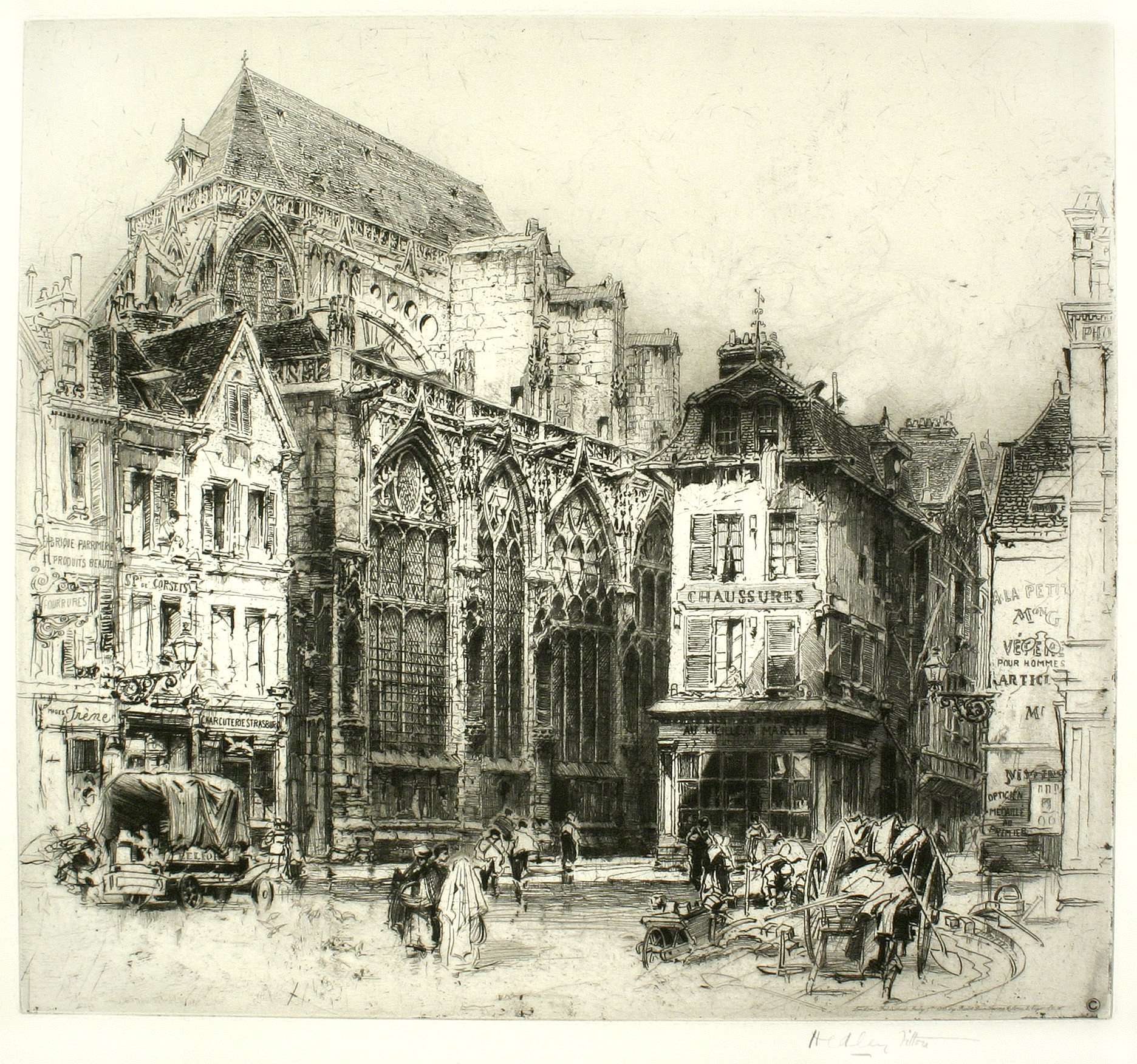 A carefully detailed church interior appears in Fitton’s Morning, Saint-Étienne-du-Mont (early 20th century). And, in the interest of including Scottish artist David Young Cameron’s shadowy Notre Dame, Dinant (1907), we step out of France to view another etching, which offers a shadowy and moody church interior in French-speaking Belgium.

France, with its Gothic architecture and picturesque towns and landscapes, remained an important subject for these artists, returned to again and again. Through members of the second wave of the Etching Revival, the art of etching became tied to these images of travel in France. 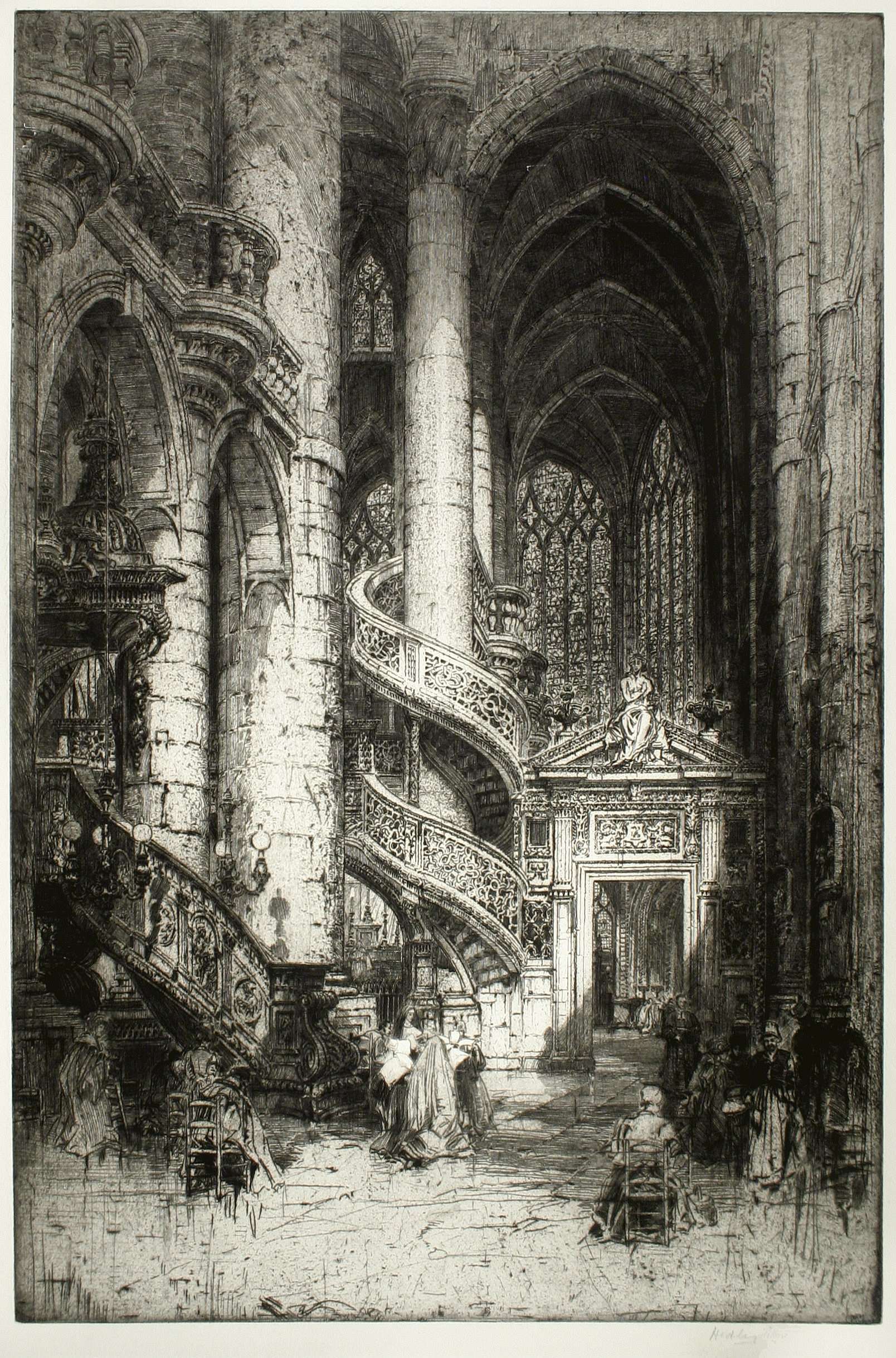