This story is part of an ongoing series of editorials in which HMML curators and catalogers examine how specific themes appear across HMML’s digital collections. From the Saint John’s Rare Books and Arca Artium collections, Dr. Matthew Z. Heintzelman shares a story about Travel.

Rome has long been a destination for travelers from around the world. Books such as the 9th-century Einsiedeln Itinerary (Stiftsbibliothek Einsiedeln; Codex 326(1076), HMML project number 48559) provided an early guide to the churches and monuments of Rome, written for Christian pilgrims. In the early modern era (16th–18th centuries), the steady flow of non-Roman visitors into the city created a need for better orientation methods, and printed guidebooks soon became common. HMML and Saint John’s University are fortunate to have several such guidebooks—as well as collections of engravings, etchings, and historical resources—that provide us with the opportunity to “visit” early modern Rome. In the following, we will look at some ways that Rome was introduced to visitors from the 15th to the 18th century.

The Arca Artium collection (a gift of Frank Kacmarcik) holds the earliest view of Rome at HMML: a two-leaf fragment from the famous Nuremberg Chronicle, published in 1493 (AARB 250). The two-page woodcut collapses many of the most famous sites into one large cityscape: the Castel Sant’Angelo, the old Saint Peter’s Basilica, and the Church of Maria Rotunda (the Pantheon), among others. 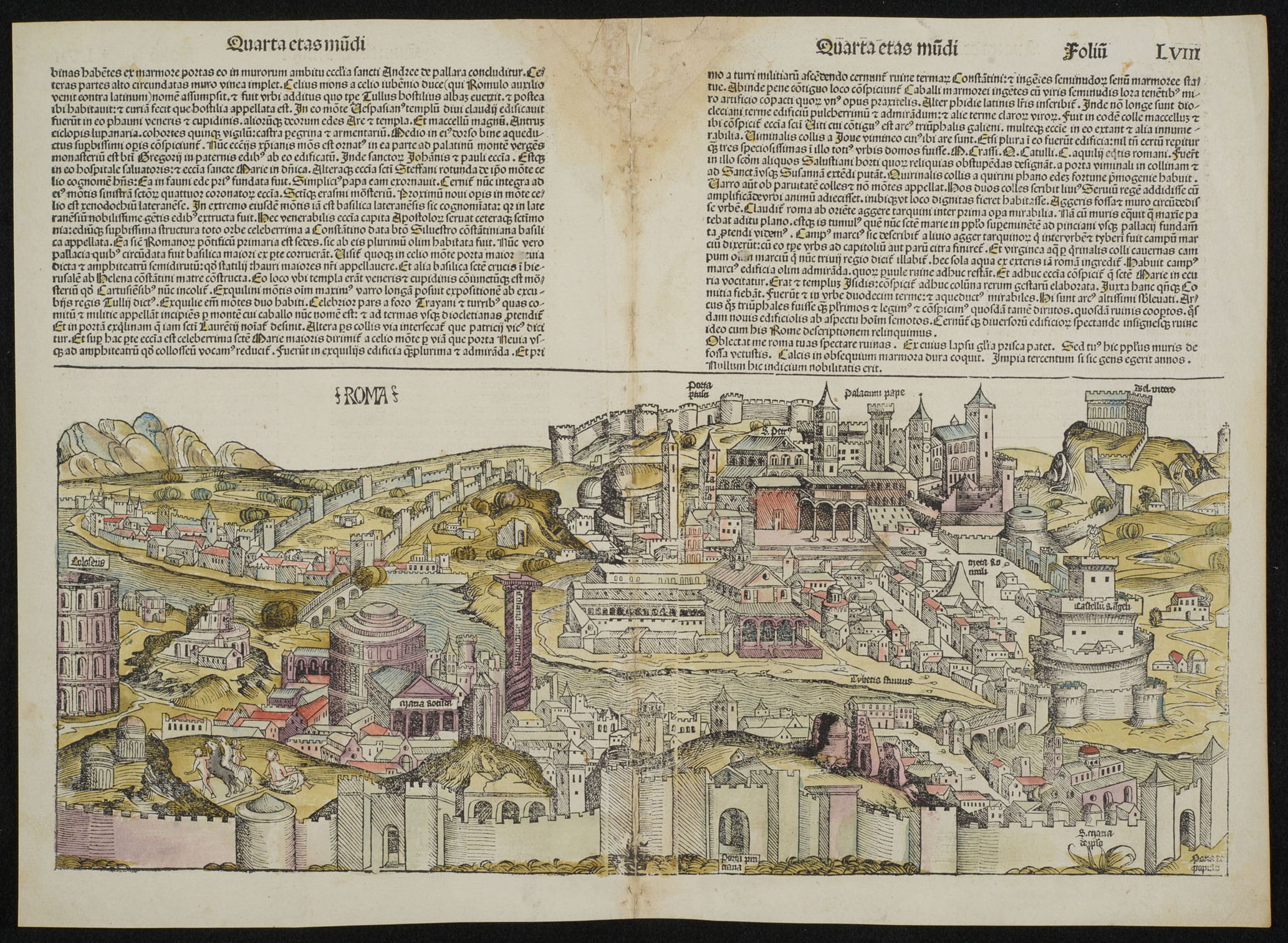 Unlike the large-sized Nuremberg Chronicle, guidebooks were typically small, often less than seven inches tall. At this more portable scale, the books could conveniently be carried along during the tour. One of the earliest such guidebooks in the Saint John’s University collections (dated 1661) is Les merveilles de la ville de Rome (AARB 274), a French translation of an Italian reworking of a popular medieval Latin guidebook, the Mirabilia urbis Romae. The Italian text, prepared by Sante Selinori (active 16th century) and illustrated by Girolamo Francini (1537–1596), continues a medieval tradition of focusing on the seven major churches of Rome, including Saint John Lateran, Saint Paul’s Outside the Walls, and Santa Maria Maggiore. 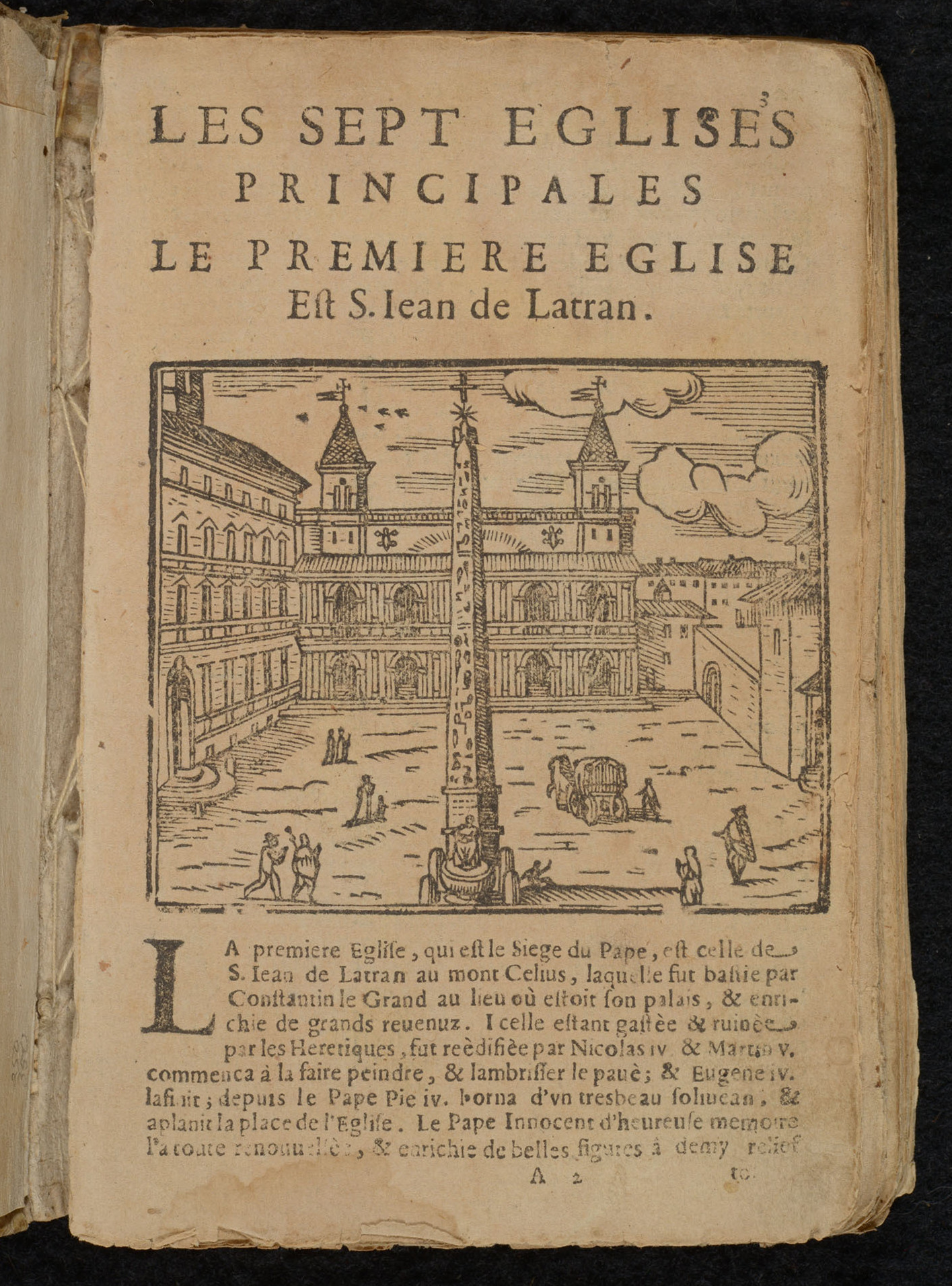 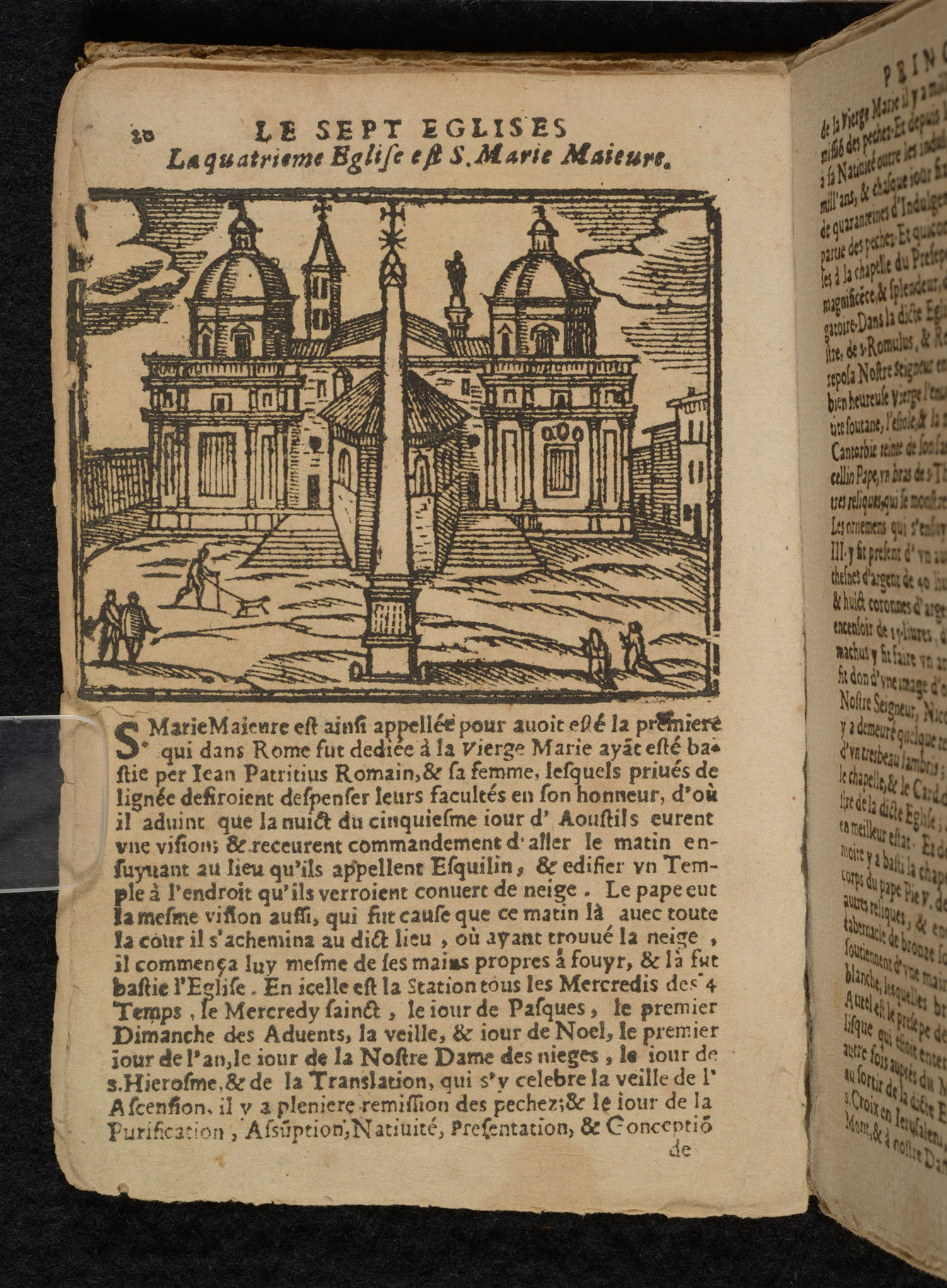 In the back of Les merveilles de la ville de Rome, there is a small section on ancient Rome written by Andrea Palladio (1508–1580); a section on the seven wonders of the world; and a list of popes, kings, emperors, Roman churches, etc. In the middle of the book is a list of “stations” or special feast days (some with indulgences) and the churches where they are celebrated (pages 67–72). Thus, a visitor to Rome could schedule a visit to a church during a feast day celebration. The heavy ink damage in this part of the book comes from previous owner who cross-referenced the page numbers for the church connected to a specific feast day. 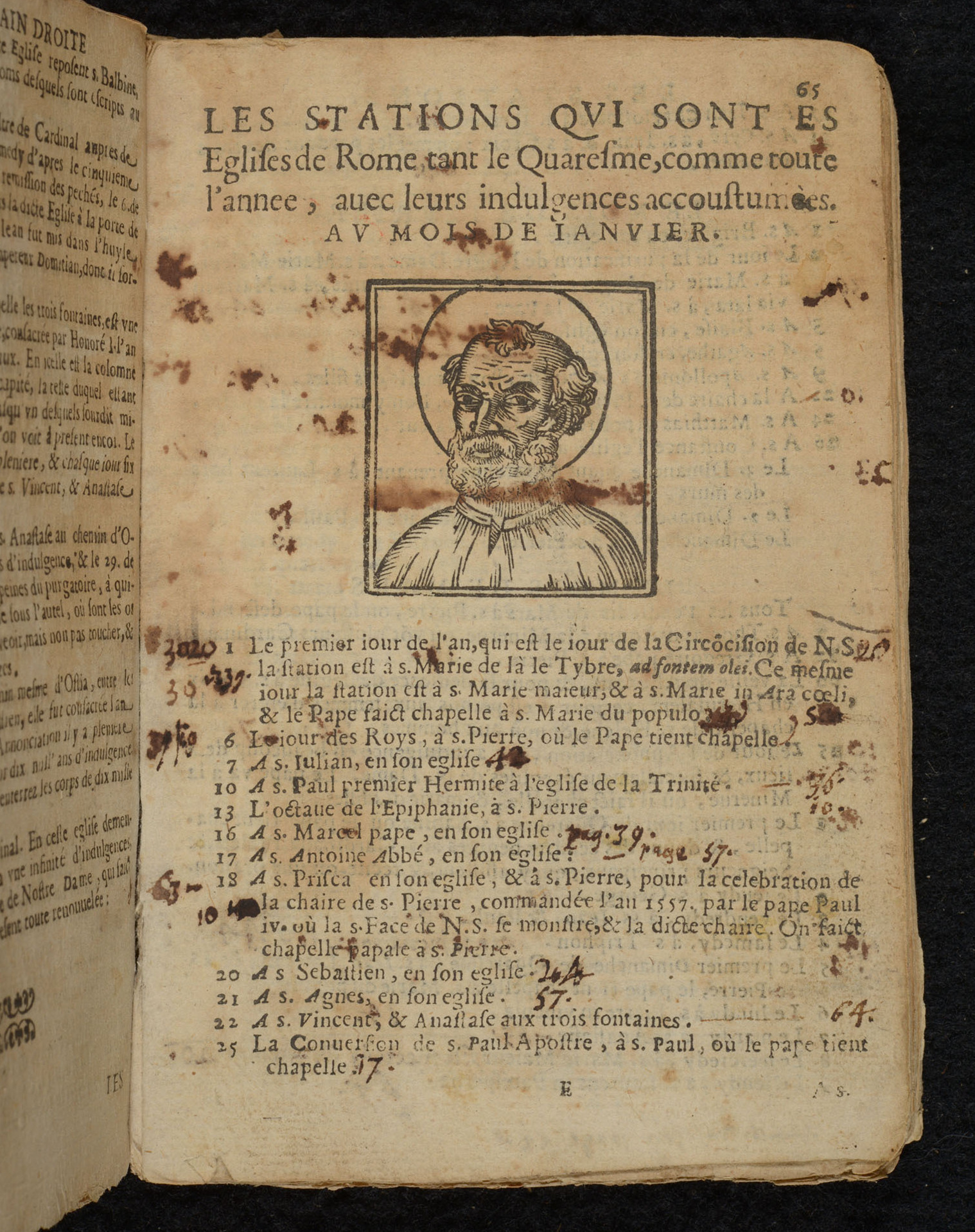 In 1644, Fioravante Martinelli (1599–1667) published his Roma ricercata nel suo sito (SJRB 600), which took the tour of Rome in a new direction. While he still focuses on religious and spiritual goals for a tour of Rome, he presents the city not in a list of churches or monuments, but rather through a set of 10 daily tours that would allow one to make circuits through the inner city. He prefaces his book with a letter to “foreigners” (forastiero) and even suggests where they should stay during their visit—in the district around the Strada dell’Orso, across the Tiber from the Castel Sant’Angelo. His various tours begin and end in this area.

Martinelli’s guide proved to be one of the most popular introductions to the city and was frequently reprinted over the next century and a half. In fact, the Saint John’s Rare Books collection holds three different printings, from 1664 (without illustrations), 1725, and 1769. The woodcuts proved to be extremely popular and were re-used again and again.

Visitors could purchase souvenirs from their trip to Rome in the form of woodcuts, engravings, or etchings. The collections at HMML include several of these illustrations, both in book form and as individual plates. One of the more interesting collections was printed by Giacomo Lauro in the early 17th century (Antiquae Urbis Splendor; AARB 53 and AARB 296). Unlike Selinori and Martinelli, he does not focus on modern (“Christian”) Rome, but on the Rome of antiquity as seen in reconstructions of the ancient buildings, circuses, and other sights. Lauro does include the seven most important Christian-pilgrimage churches, however.

The Arca Artium collection holds two sets of plates from Lauro, which differ in fundamental ways. One is arranged like a book, with each plate numbered. All of these plates are blank on the verso but have an explanatory Latin text at the bottom of the picture. The other set contains unnumbered plates, not arranged in the same order as the first. Interestingly, the second set also has been adapted for use with visitors to the city: many include descriptive texts in Italian, German, and French on the verso, as we can see in an example from the “Circus Agonalis” (today’s Piazza Navona). 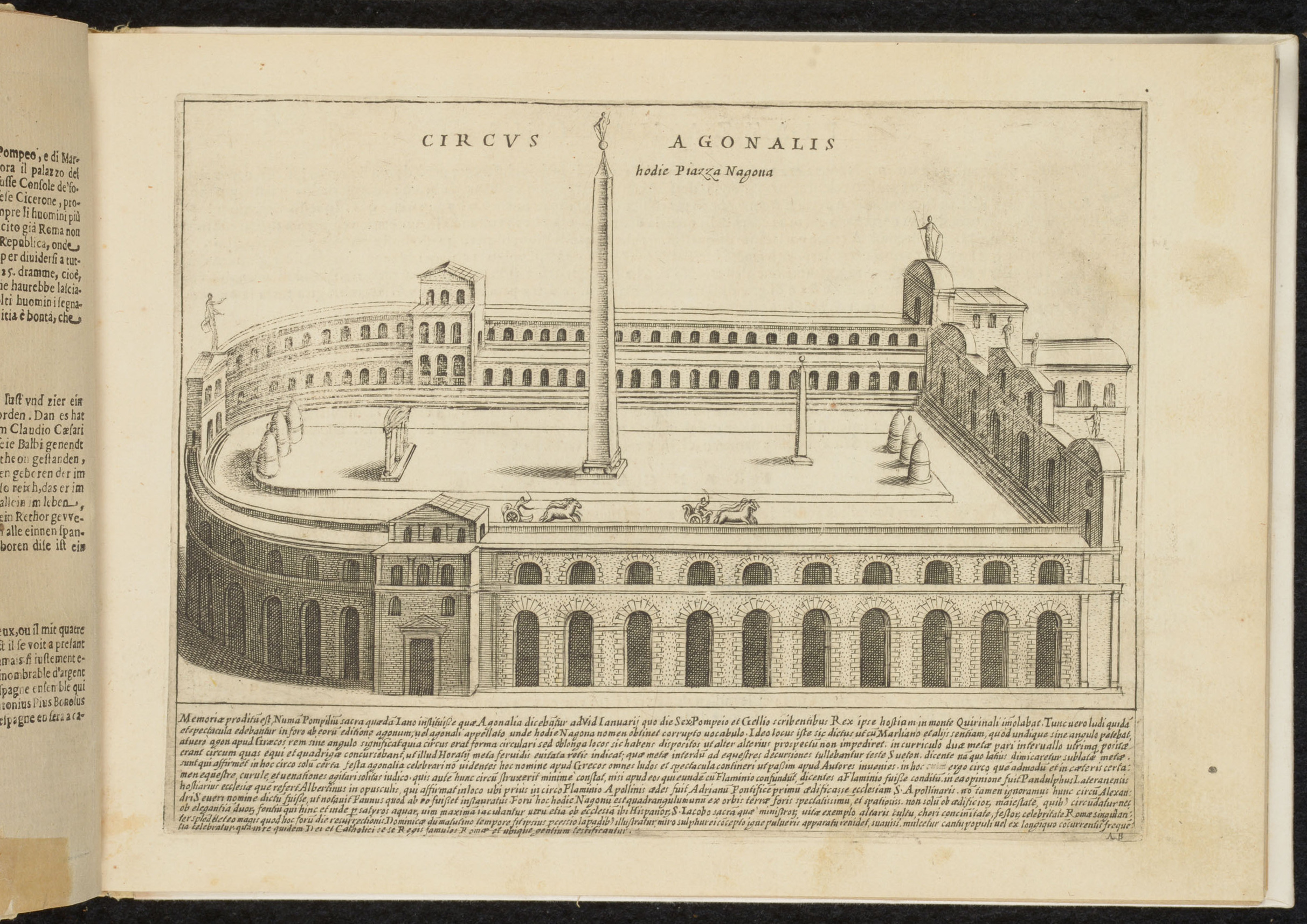 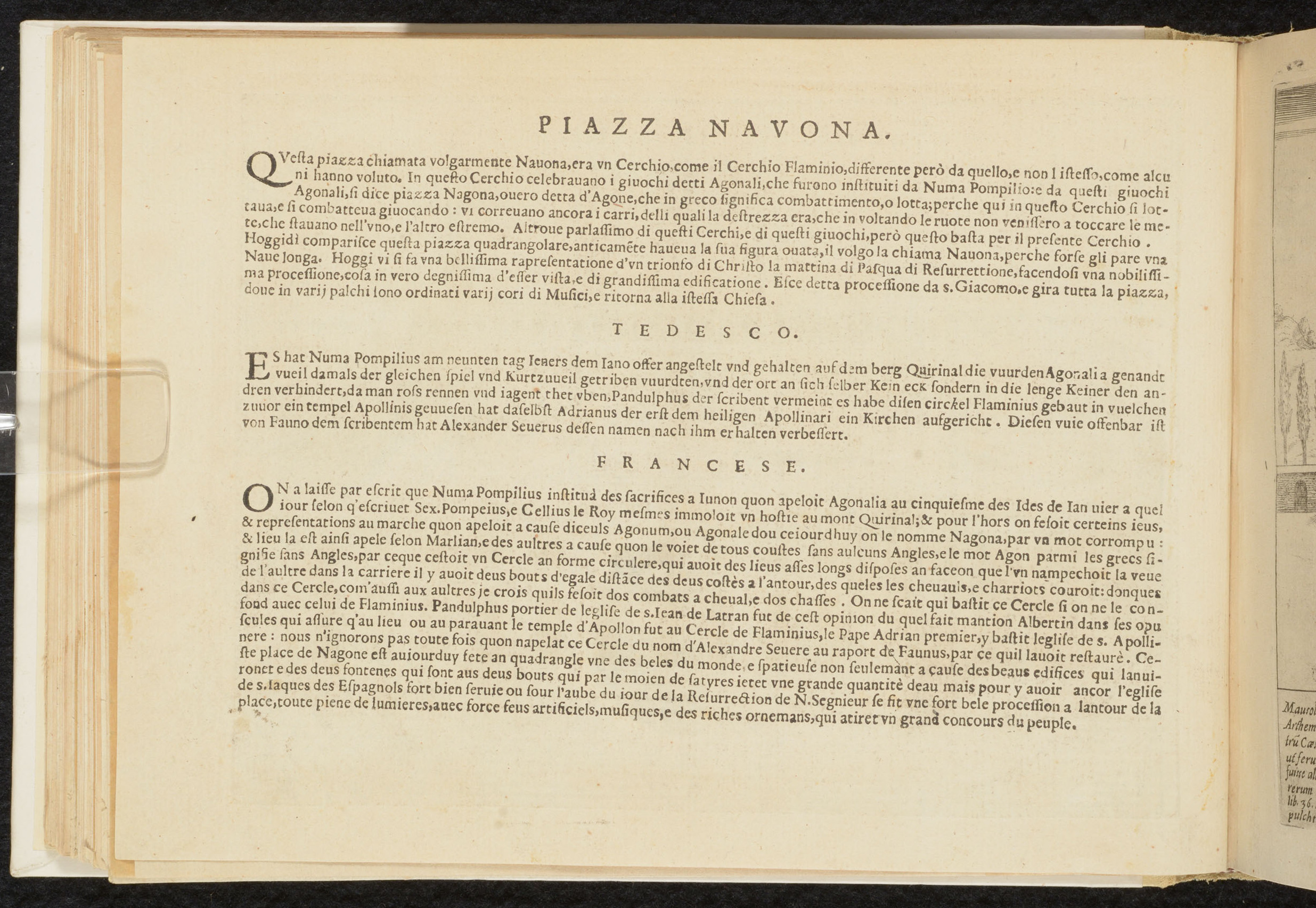 This would seem to indicate two different approaches to marketing the plates: visitors could purchase an entire book of memories, or just bring home individual plates (much like picture postcards). In the latter, the fact that the relevant text appears on the back of the plates points to them being treated as separate items and not a picture book.

These are but a few of the materials available in HMML’s collections for studying early modern Rome in text and image. There are numerous monographs and sets of engravings on the Basilica of Saint Peter, the catacombs, ancient ruins, as well as other churches around the city. Some are more accurate architecturally, and some are more impressionistic. There also are many prints in Museum, including more than 30 from Giovanni Battista Piranesi (1720–1778), depicting sites like Tiber Island, Piazza Navona, Saint Paul’s Outside the Walls, and Santa Maria Maggiore. You can explore these collections from anywhere for free!

Guidebooks, and Guides to Guidebooks