Lebanon is one of the most religiously variegated countries in the Middle East. Among the numerous Christian churches is a strong community of Melkite Greek-Catholics. The Melkites have a fascinating history: their appellation comes from the word for “king” in Syriac, the dialect of Aramaic that was once their liturgical language. Their forbears were part of the Syriac-tradition churches that followed the king—the Byzantine Emperor—in accepting the Council of Chalcedon in 451 while the majority did not (they became the Syriac Orthodox Church; another group, now known as the Assyrian Church of the East, had previously refused to accept the Council of Ephesus in 431). For centuries the so-called Melkites remained Syriac in both liturgical language and liturgical forms, until the influence of their Byzantine co-religionists led them to adopt the rite of Constantinople, though celebrated in Syriac. By the sixteenth and seventeenth centuries, however, the use of Syriac had become a barrier to liturgical comprehension for those living away from the Aramaic-speaking regions in northern Syria, southeast Turkey, and northern Iraq. 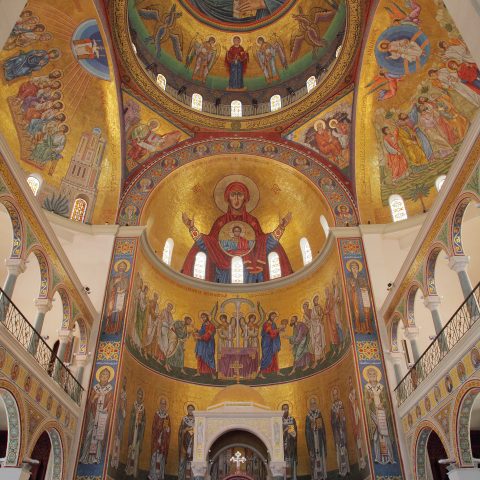 The Melkites were concentrated in what are today Lebanon and Syria, and Arabic was their daily language. So they began an ambitious new translation project, this time from Greek and Syriac into Arabic. Another inflection point came during the 18th century, when Melkites in Aleppo came into contact with European Catholic missionaries. Some among them saw an opportunity to be in relationship with Christians in Europe, a connection which had taken on new urgency after the fall of Constantinople to the Turks. This group established communion with the Bishop of Rome, while maintaining their traditional Byzantine rite, celebrated in Arabic. They also began to translate European Catholic theological and devotional works into Arabic. Today they are known as the “Melkite Greek- Catholic Church,” a name that captures their richly-textured history. (Their parent church is known today as the Antiochian Orthodox Church.)

The Saint Paul Fathers are a perfect illustration of this complex but creative legacy. They were founded at the dawn of the 20th century (1903) by Germanios Mouakad, the Melkite Greek-Catholic bishop of Baalbek (eastern Lebanon, site of Roman-period temples), who saw a need for a missionary order within the Melkite Catholic tradition similar to those in the Roman Catholic Church. The headquarters of the order is at Harissa, high above the Mediterranean coast and now the premier site of Catholic pilgrimage in Lebanon because of its shrine to the Virgin Mary. There they conduct a seminary, manage a successful publishing enterprise, and celebrate their Arabic Byzantine liturgy in a magnificent basilica adorned with traditional mosaics. The order is therefore modern and traditional, able to respond to the changing needs of Christians in a challenging situation.

Their library of 400 manuscripts manifests this tradition throughout its breadth and depth. The collection also witnesses to the devastating effects of conflict: almost half of the original collection is now missing. HMML digitized the library in 2012, but it still awaits cataloging.

ABOUT THE AUTHOR: Dr. Melissa Moreton was assistant director for strategic initiatives at HMML from 2018 to 2020.
Story Tags:
All StoriesHMML Sites & PartnersPreservation ProjectsCollections
Share:
Previous Story
Next Story