The Next Stop was Kremsmünster Abbey

December 20, 2022
The Next Stop was Kremsmünster Abbey 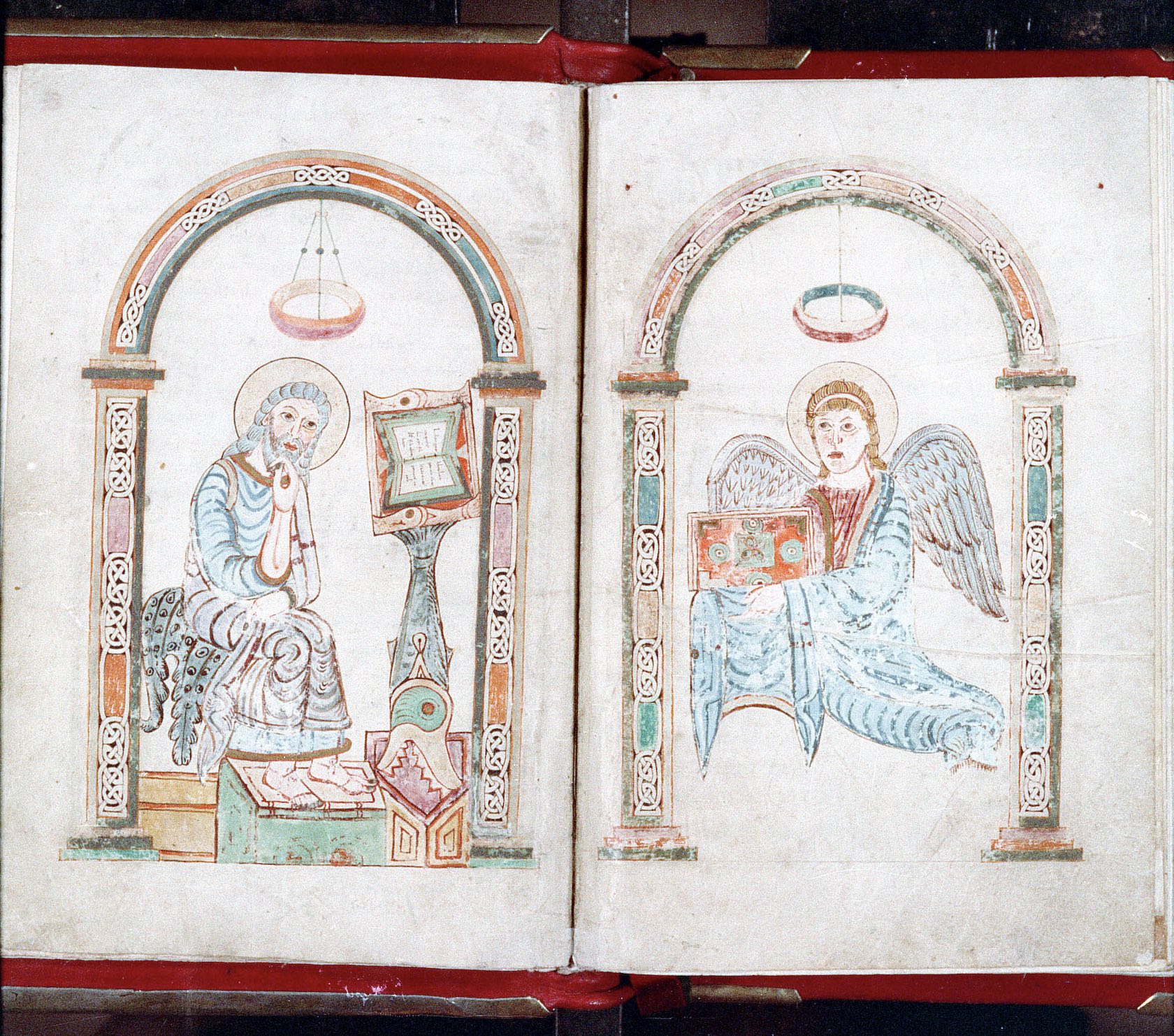 One of the special books at Kremsmünster Abbey—an 8th-century Gospel Book, shown here with the evangelist Matthew and his angel/symbol. The term “cimelia” in the manuscript’s shelf mark refers to it being a “jewel” or “treasure” of their collection. (Codex Cremifanensis Cimelia 1, HMML 2324)

“The next stop was Kremsmünster Abbey. When I arrived, the porter immediately told me that the abbot wanted to speak to me on the phone, whereupon I was set for the next treat of bad news. But his first words on the phone were: Willkommen in Kremsmünster. Sie werden in Kremsmünster anfangen (Welcome to Kremsmünster. You will begin your work here). Brother, what a day that was for me, to hear such good news with my own ears.”—Father Oliver Kapsner, OSB, in A Sense of Place II (Collegeville, Minnesota, 1990)

Father Oliver Kapsner was the founding director of HMML. When Abbot Albert Bruckmayr, OSB, gave him permission to microfilm the medieval manuscripts at Kremsmünster Abbey in late 1964, he could not have imagined the monumental accomplishments that would result. From this first partnership to photograph manuscripts, HMML’s preservation work would steadily grow in the subsequent six decades. Today, HMML holds the largest collection of resources for the study of manuscript cultures, providing digital access to manuscripts photographed in partnership with more than 800 libraries worldwide. 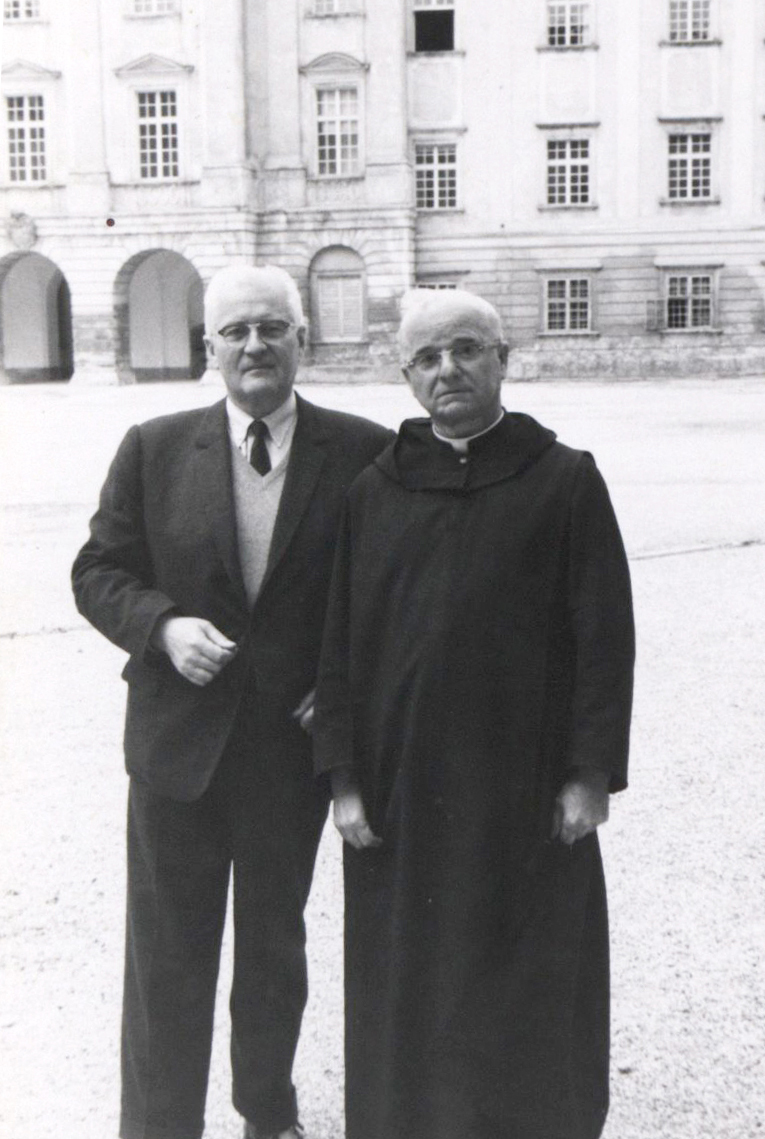 At Kremsmünster, a Benedictine Abbey dating back to the eighth century, Father Oliver’s team created HMML’s photographic preservation methodology from scratch. In the process, the team microfilmed 433 codex manuscripts and about 67 manuscript fragments dating from the eighth to the 17th centuries. Descriptions of these manuscripts are now available online in HMML Reading Room. 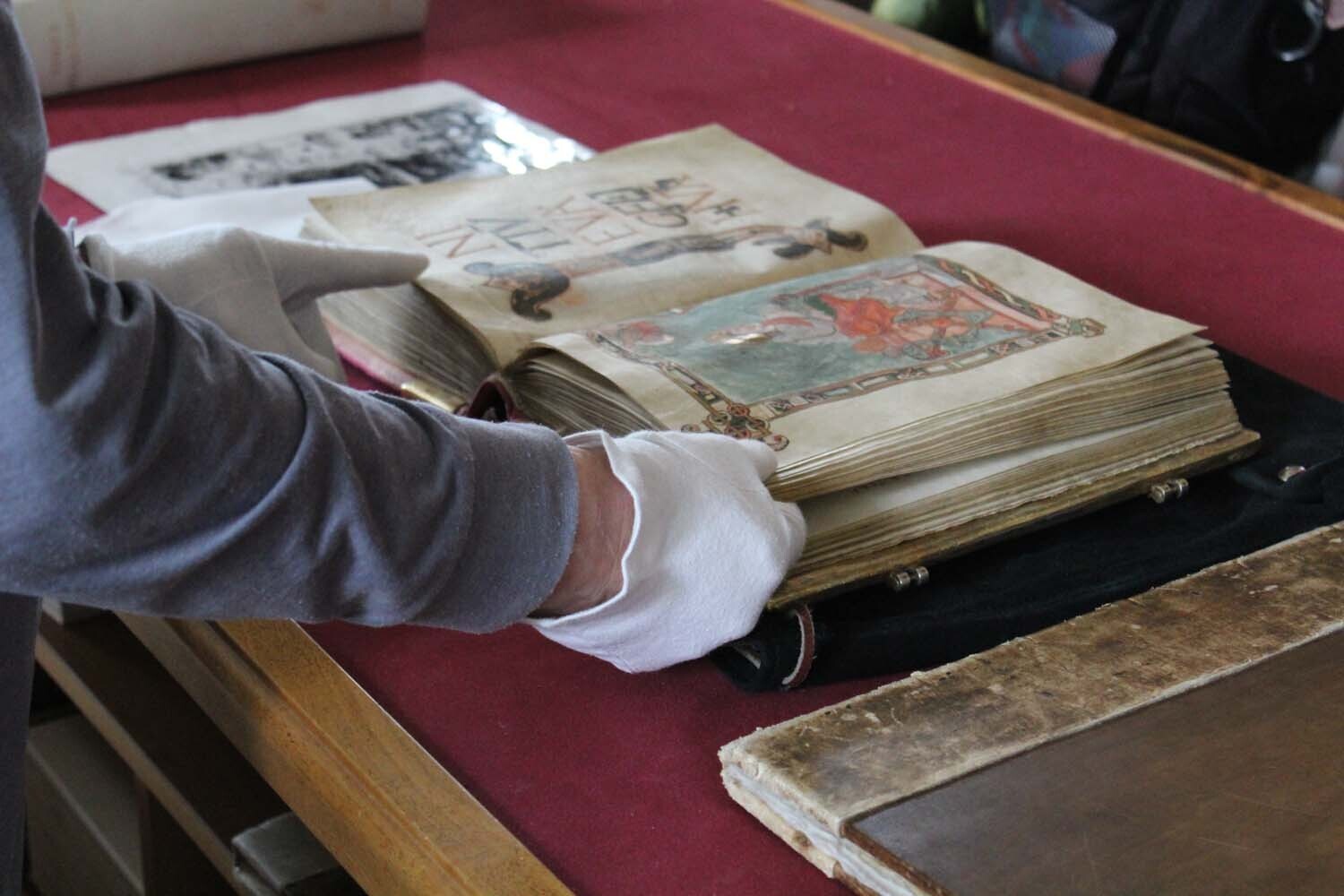 One of the manuscripts in the Kremsmünster Abbey collection. Photograph by Dr. Matthew Z. Heintzelman, 2015.

The first manuscript that HMML filmed, Codex Cremifanensis 1 (HMML project number 1), contains more than 30 texts and is a nice example of how complicated manuscript books can be. Like many manuscripts photographed by HMML, this one was bound together later, bringing together sections of other manuscripts. Some parts were copied as early as the 13th century, while others are from the 15th century; some on leaves of parchment and others on leaves of paper. The contents range from religious treatises to sermons, to a life of Saint Benedict, to texts against the Hussites. Most of the manuscript is in Latin, but there are notes and vocabulary that include German. 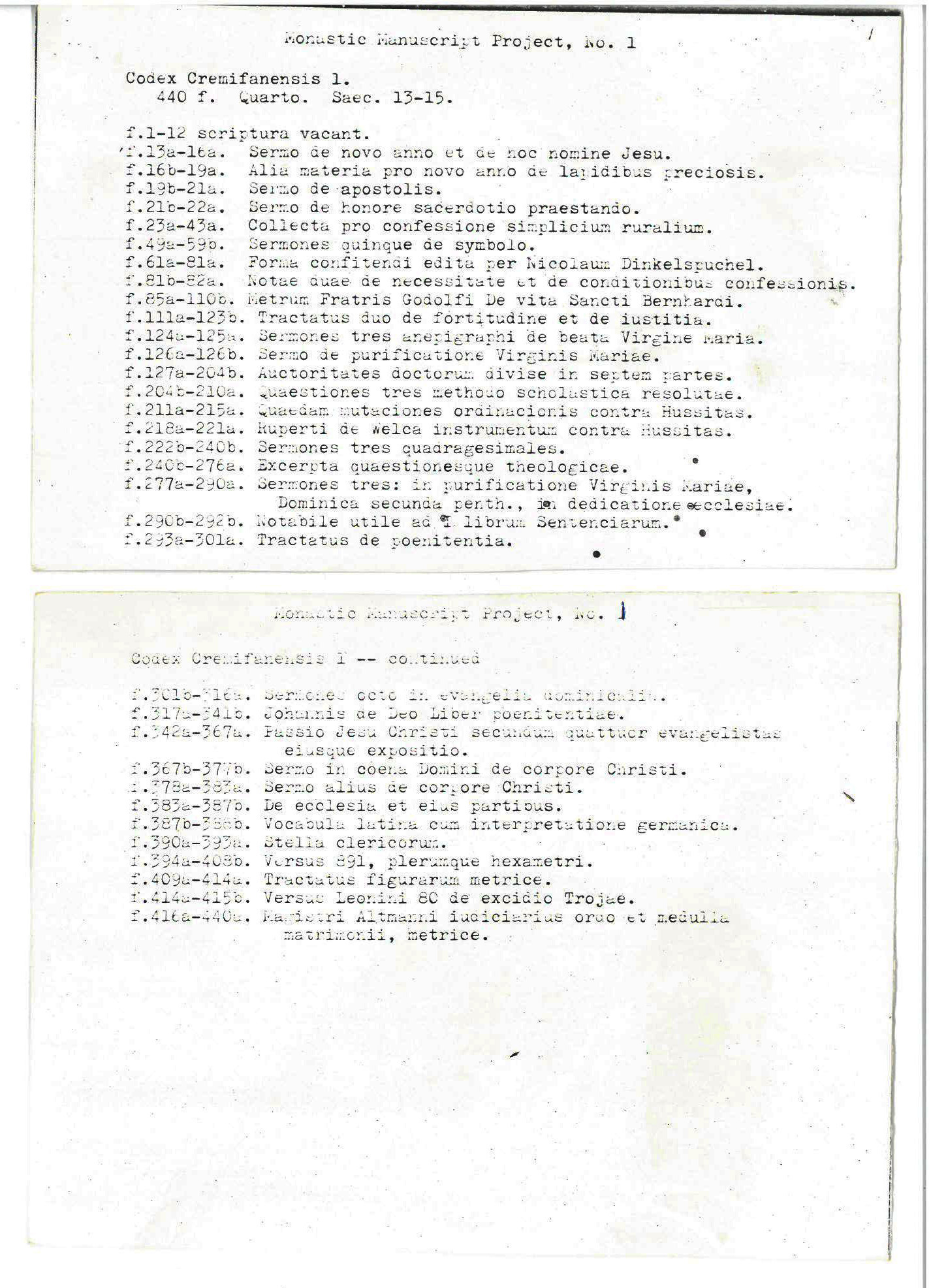 The inventory card typed by Father Oliver, listing the contents of the first manuscript photographed by HMML—note that it took two cards to record it all. Unlike modern print books, which generally are printed all at the same time and contain only one (or two) title(s), this manuscript is composed of many shorter texts (some without titles) copied at different times over the course of 200 years. They were only bound together as one “book” in the 15th century. (HMML Archives)

As a whole, the Kremsmünster manuscripts represent a broad range of monastic texts on hagiography, liturgy, Biblical studies, theology, philosophy, canon law, and other fields.

Before long, Father Oliver’s team was working at several other Austrian abbeys and monasteries, with support from Kremsmünster’s librarian. These include the large collections at Stift Melk, Stift Sankt Florian, Stift Göttweig, and Stift Seitenstetten. The trust established in these early successes opened opportunities for HMML to photograph manuscripts across Austria and later in Germany, Switzerland, and elsewhere around the world. 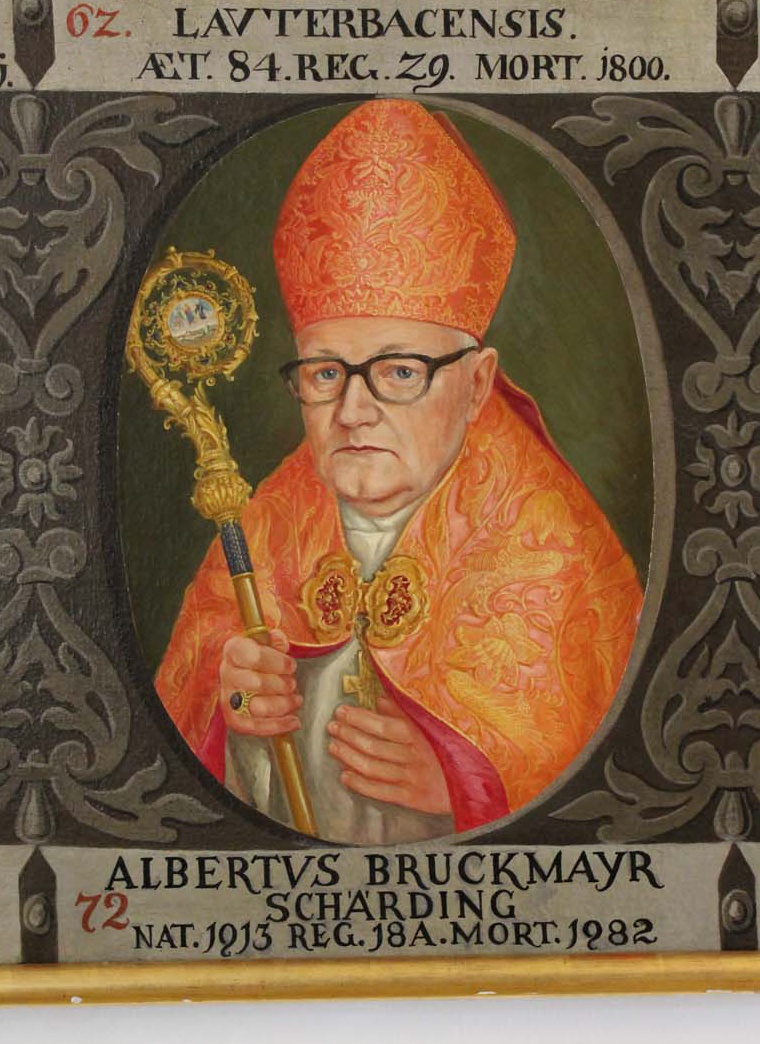 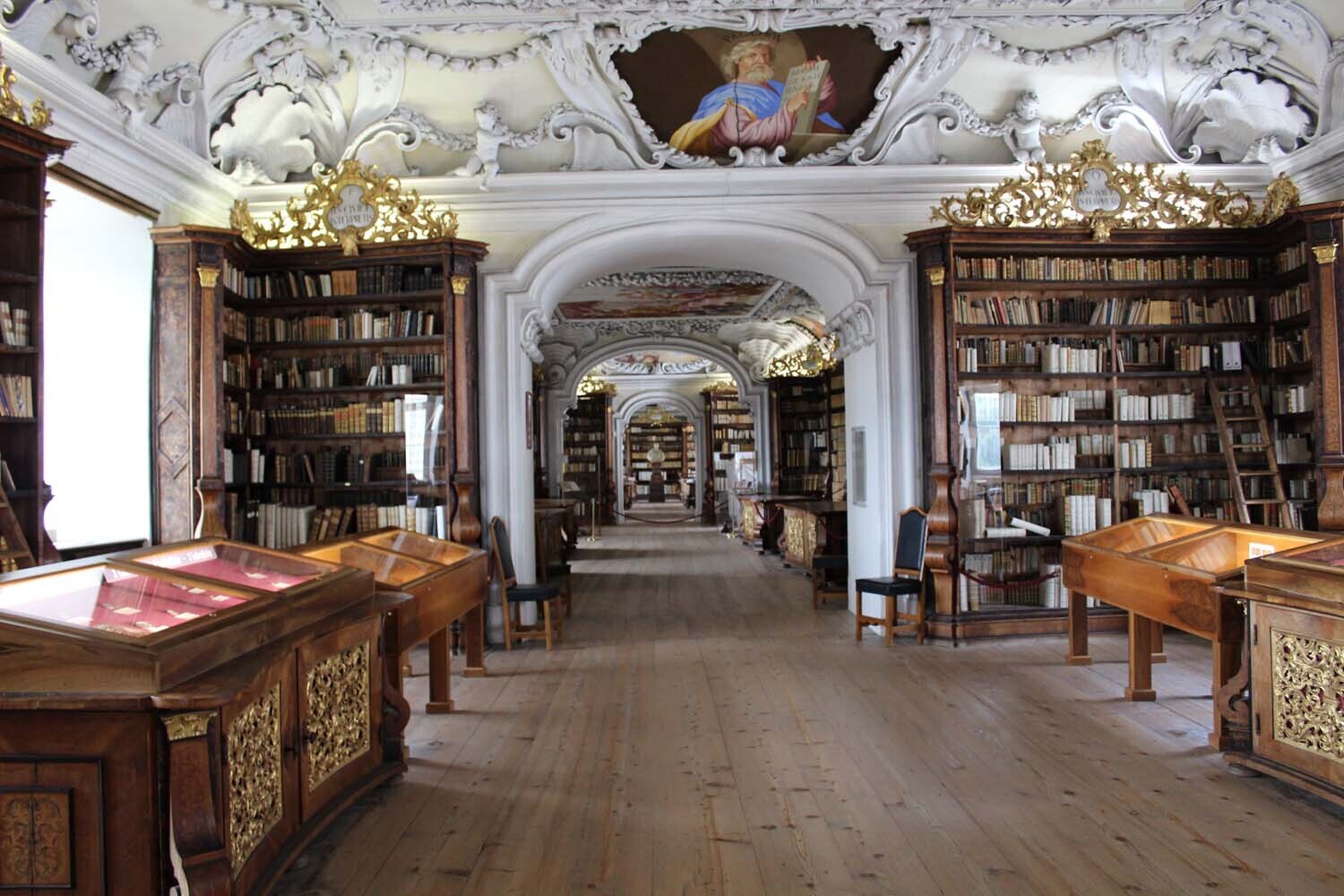