This story is part of an ongoing series of editorials in which HMML curators and catalogers examine how specific themes appear across HMML’s digital collections. Katherine Goertz looks at The Celestial in this story from the Art & Photographs collection. 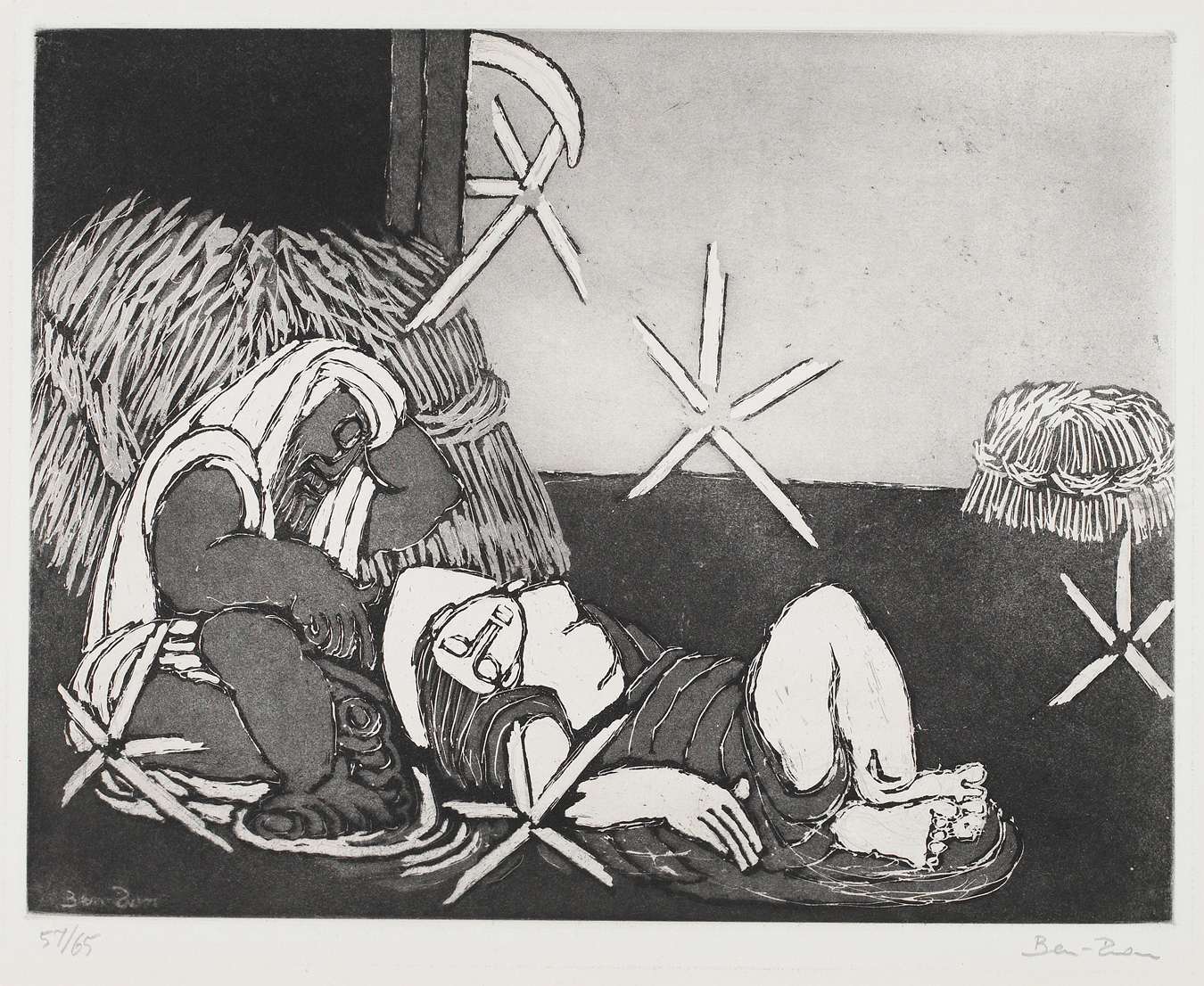 Ben-Zion, Boaz and Ruth (And it came to pass at midnight), from the portfolio The Book of Ruth, Job, and Song of Songs. (AAP3353)

Born Ben-Zion Weinman in Starokostiantyniv (then part of the Russian empire, now in present-day Ukraine), Ben-Zion came to New York City in 1920. While he started out as a poet in the city’s Yiddish literature scene, in the 1930s Ben-Zion moved to the visual arts, becoming a painter, printmaker, and sculptor. He was a founding member of The Ten, a group of nine modernist artists based in New York.

As Abstract Expressionism became the dominant movement in American art, Ben-Zion rejected what he viewed as the modernist co-option of mysticism. He thought that Barnett Newman’s “zip” paintings, with their references to Jewish mysticism, were impenetrable and esoteric, as was the work of (former The Ten co-member) Mark Rothko.

To Ben-Zion, such an approach made the artwork only accessible for a select few. Art, Ben-Zion wrote, should be comprehensible. For him, art was elevation from chaos; it was the expression of the artist’s inner vision, and the ability to connect with the inner vision of others.

Ben-Zion’s imagery, while it may not have been exactly simple, was meant to be easy to understand and to internalize. Much of it was straightforward, with narrative and emotion suggested by the exaggerated twisting bodies of his figures or the emptiness of his landscapes. He used few explicit symbols, preferring to repeatedly depict figures that were meaningful to him, including prophets and legendary heroes. One of the most consistent abstract symbols across his work is stars. 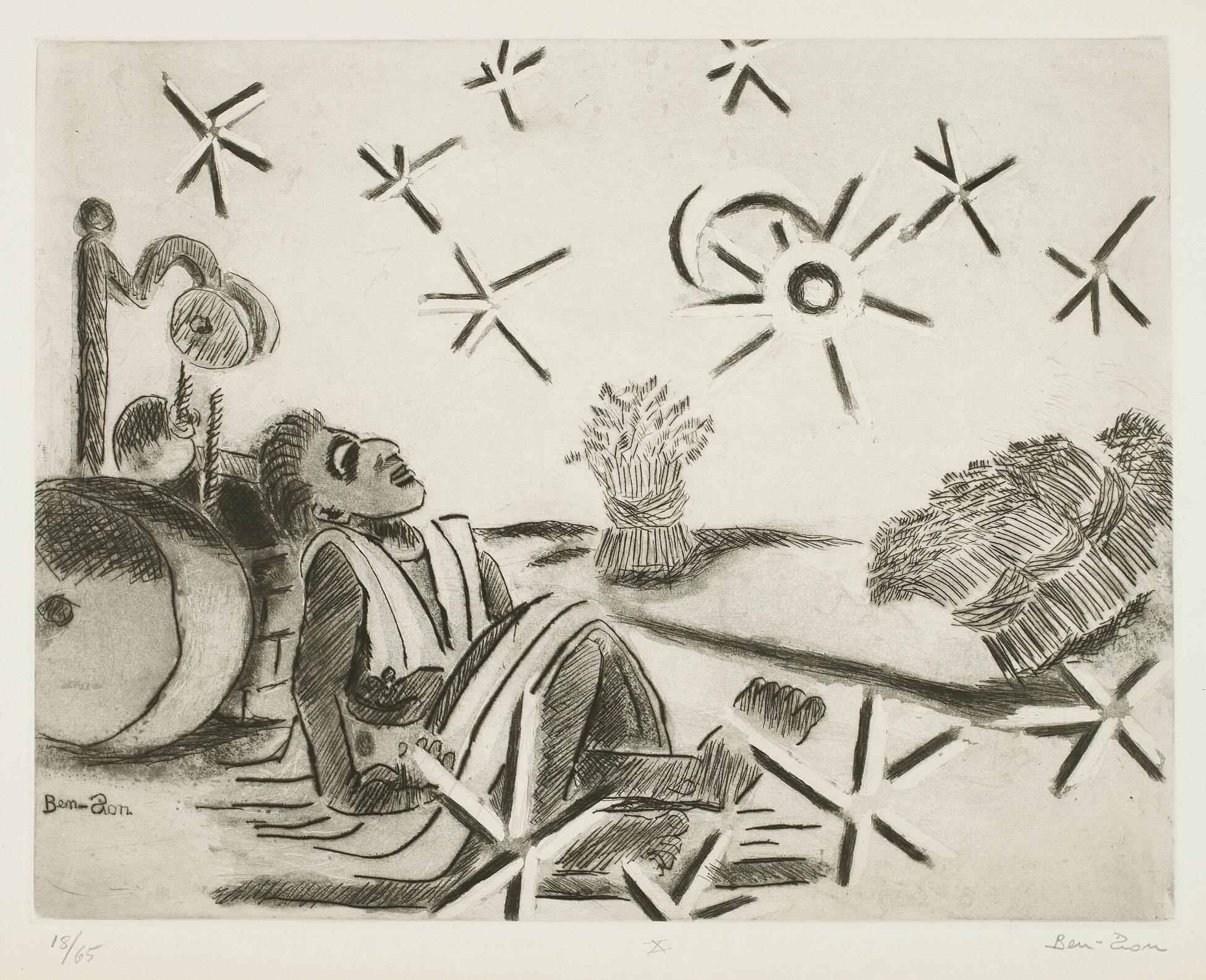 Stars (and other celestial bodies) seem to suggest connection in Ben-Zion’s work, particularly divine connection. In Joseph’s dream (Behold, we were binding sheaves), stars imply the surreal world of dreaming and the divine origin of Joseph’s dream. In Boaz and Ruth (And it came to pass at midnight), the stars ring the sleeping lovers while the moon peeks out from behind a wall. The stars that drift around Boaz and Ruth emphasize their physical and emotional connection and the divine ratification of their union. In the biblical backstory behind Abraham among the stars (Look now toward heaven), Abraham is shown the stars in the sky, as numerous as his descendants. In Ben-Zion’s interpretation, the stars drift downward toward the reclining Abraham. Is it divine presence or the connection of Abraham with his promised family? Or both? 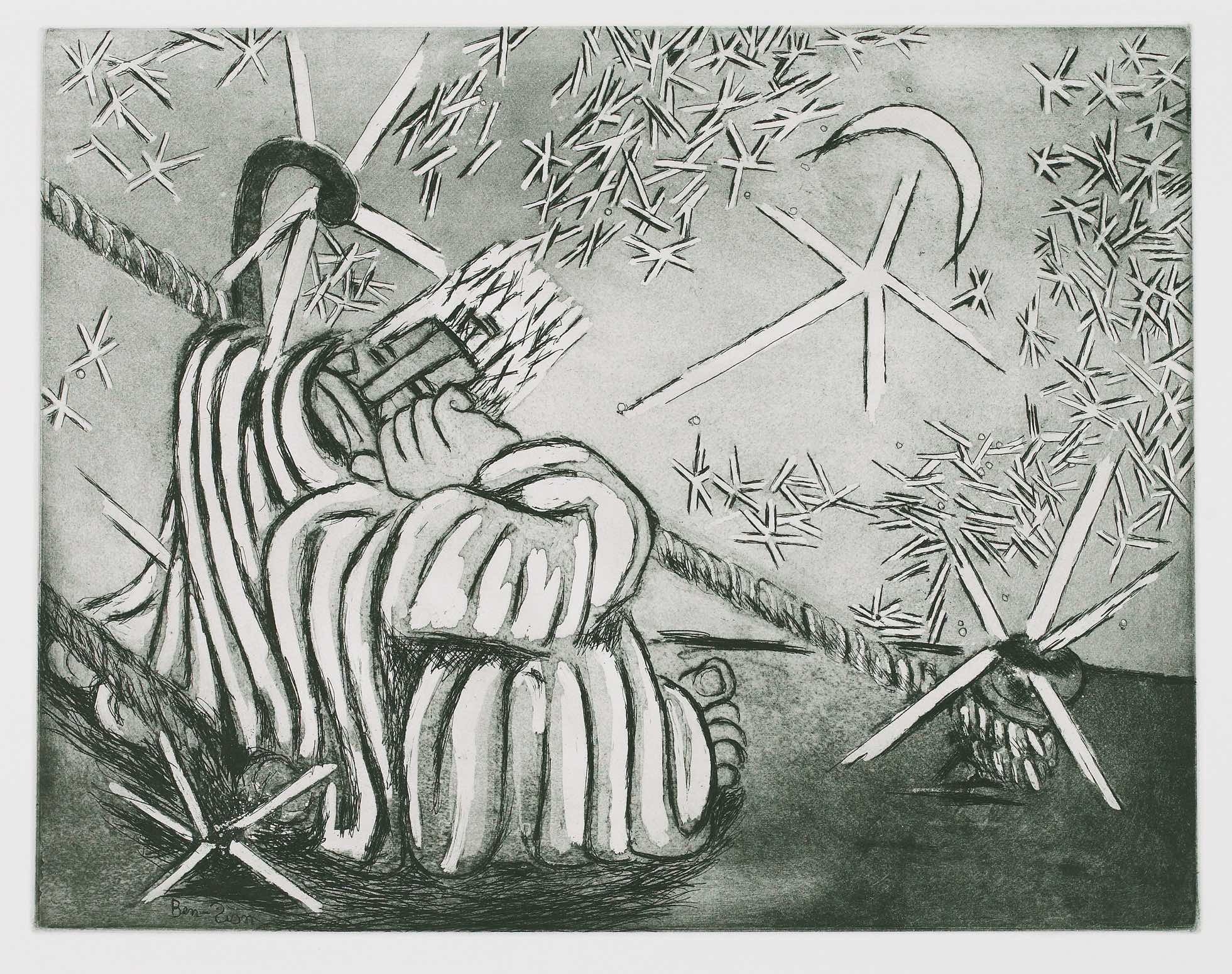 Ben-Zion, Abraham among the stars (Look now toward heaven), from the portfolio Biblical Themes. (AAP3624)

Stars are very often seen in Ben-Zion’s works depicting prophets. In two etchings from the series Life of a Prophet, stars suggest divine presence and encouragement. In many other works, like The Prophet in the Dark (Watchman, what of the night?), the stars the fall at prophets’ feet and drift down toward them from above highlight the relationship between the prophet and the Divine. 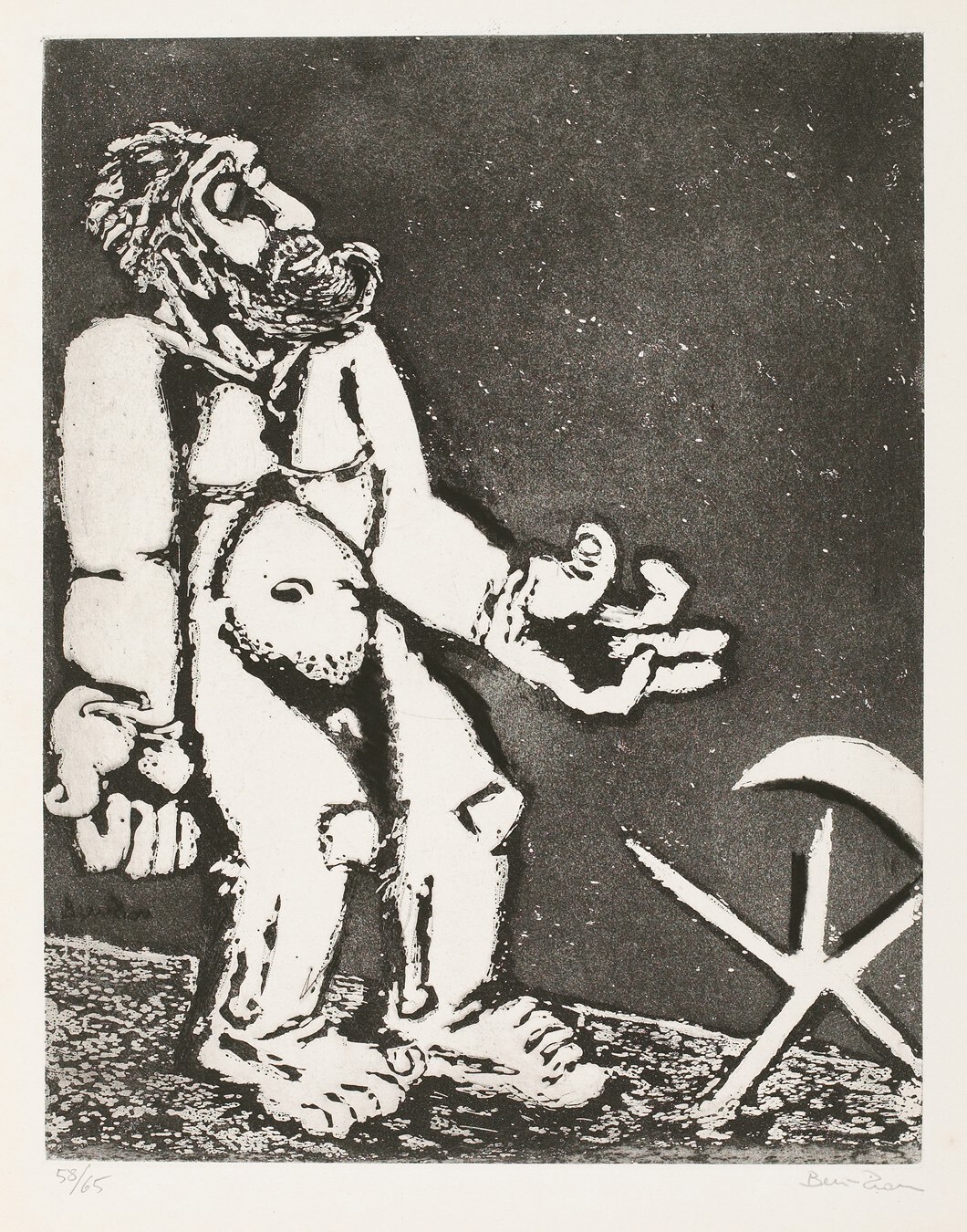 Ben-Zion, The Prophet in the Dark (Watchman, what of the night?), from the portfolio Prophets. (AAP2788)

There are more than 140 works by Ben-Zion in the Art & Photographs collection at HMML, all viewable online in Museum. The collection includes several portfolios and series, along with many stand-alone pieces, mostly etchings, and a few drawings. 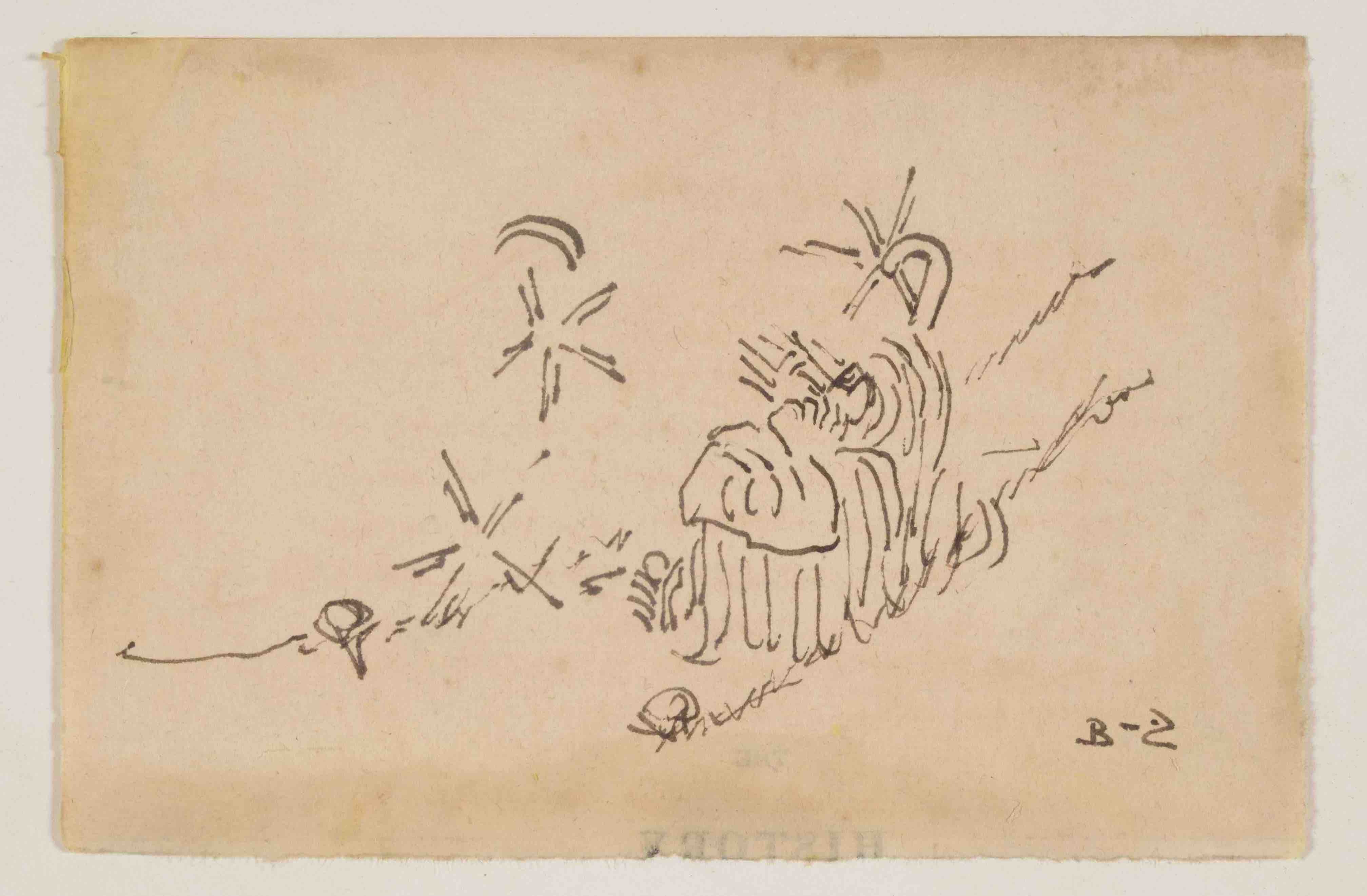 Ben-Zion, Drawing of a prophet with stars. (AAP5787)
ABOUT THE AUTHOR: Katherine Goertz is curator/registrar of art collections at HMML.
Story Tags:
All StoriesCollectionsEditorialsSeries - The Celestial
Share:
Previous Story
Next Story